You like Battlefield 4? You like dramas about cops and robbers duking it out in urban dioramas? This game is for you. It's Battlefield. With cops.

Battlefield Hardline takes a shot at the TV-style cop drama

High concept elevator pitches are the quasi-linguistic code through which marketing amoebas exchange enzymes with one another, thus populating the future with a bubbling ferment of AAA soup.

Take, for example, Battlefield Hardline. It's "Battlefield 4. With cops."

I could leave you with those last four words and you'd pretty much get the entire game. But that would be to deny ourselves the answer to important questions like 'how much like Battlefield is it'? And, 'what sort of cops?' And 'does it run at 60 frames per second in 1080p'?

The answers to these questions are 1) Very. 2) Unrealistically violent and 3) Pickles.

Steve Papoutsis, vice president and general manager of developer Visceral tells a nice story about a casual meeting he had with a DICE exec, during which they shared a few drinks in Barcelona and chewed over the idea of extending Battlefield outside the, well, battlefield. Why not replace the soldiers with cops and robbers? Why not move the story from ragged foreign warzone to downtown domestic warzone?

I like this story because it almost entirely quashes my cynical inner creature warbling that Battlefield Hardline is Electronic Arts' way of muscling in on some next-gen urban-chaos action left blank by the absence of a Grand Theft Auto game (at the time of writing) on Xbox One, PlayStation 4 or even Windows PC. Certainly, drafting the Battlefield 4 engine into a cops and robbers narrative is a much more efficient way of achieving instant GTAness than, say, creating Watch Dogs from scratch. 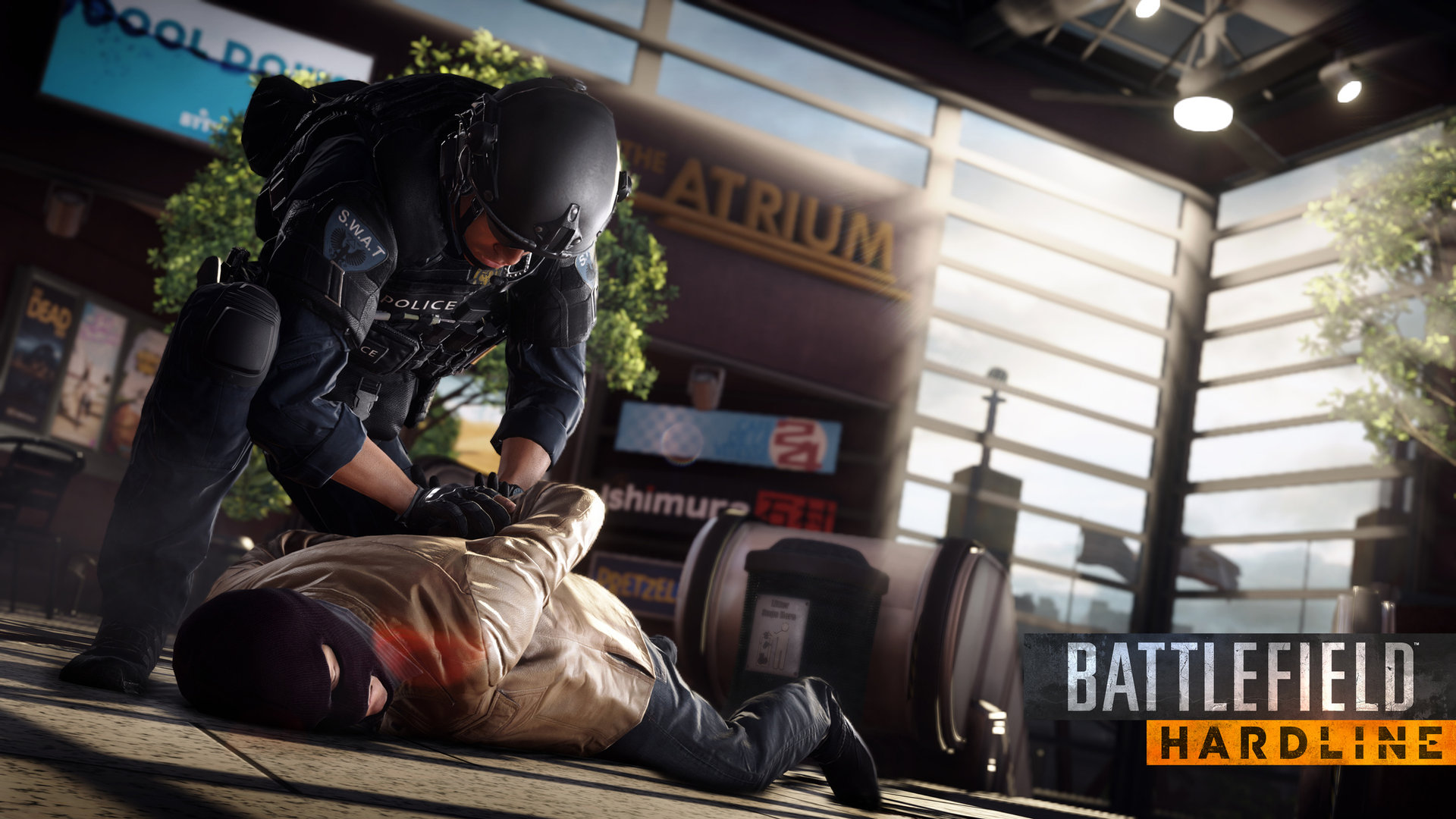 Curiously, Electronic Arts has chosen to focus on the game's multiplayer modes as part of its E3 reveal. But a look at some of the brand umbrella marketing assets (multiple bad-ass character split screen with different shaded overlays) and a recently leaked video tells us that the single player story is right out of the Rockstar playbook, itself cobbled together from 1970s gangster movies and a pretend-ironic appraisal of Fox TV's primetime output.

I played two modes in a downtown Los Angeles map. Heist is all about getting into a secure location with your team, getting in and getting away. Or, as cops, stopping that from happening. Blood Money is more symmetric. Both sides are trying to grab a pile of money and get it back to base, while protecting said base.

As either a cop or a robber you can choose one of four classes, with access to a variety of weapons, gizmos and vehicles. Its Battlefield credentials play out in a heavy reliance on vehicles and on much-vaunted Levolution events in which large structures come crashing to the ground, thus altering the map significantly. If you enjoy Battlefield maps, there is no reason to suggest you won't enjoy these maps. Assuming you like cops and robbers as much as you like squaddies. 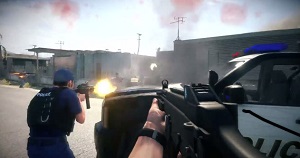 If my hands-on with Battlefield Hardline was actually a police operation it would have resulted in the largest criminal prosecution of a law enforcement agency in U.S. Justice Department history. I would pay $60 to watch Attorney General Eric Holder watching this game's multiplayer. That would be something different. This is not.

It's not different when it's the same demolition derby of vehicle kills; it's not different when shooting any competitor on sight overrides all objectives. We saw a couple of playlists that tried to make the usual multiplayer archetypes — capture this, defend that, control here — make sense within the realm of cop work. But when the police don't need to behave like police, just look like them, Battlefield Hardline's multiplayer is little more than a pack of vehicles, maps and skins.

Two play types were shown: Heist and Blood Money. Both were cash grabs, the cops ostensibly wanting it as — finger quotes — evidence. Heist had robbers guarding and detonating charges to get to the dough. Blood Money featured drop points that could be raided by the opposition, potentially turning the tide of the game at the last minute.

The setups would be interesting if police actually had to arrest someone, but they don't. Killing opponents is the surest way to defeat their plans and rank yourself up. So get in the mobile command post and start violatin' the hell out of due process. Just drive over everyone in sight. There was a long, wide viaduct with no parked cars — and no bystanders, of course — on the map we played and anyone caught on foot there is destined for a respawn.

This isn't a cops-and-robbers multiplayer experience; if you want that, try Payday: The Heist or Payday 2. I grant that it's difficult to code humans-versus-humans multiplayer shooter rules if one side has to perform with restraint, the distinguishing trait (or should be) of police activity. But then, if multiplayer's going to be any kind of a draw, then maybe it's best not to go with a police theme that people will find irrelevant, if not comedic. Battlefield Hardline is just more of what military shooter multiplayer is, has been, and always will be, whether it carries a badge or not.

That said, the multiplayer game didn't seem to me (or my colleague Owen Good - see panel) to offer anything that was particularly different from any other military shooter. In presentations to reporters, EA made the point, repeatedly, that this game will scratch an itch to play in a TV-show-style cops and robbers world, which is more intimate than the world of opposing military forces. But this intimacy seems to mostly play out in voice-over dialog snippets, of the kind familiar to anyone who actually watches Hawaii 50 or CSI or The Closer.

"Also, with something as simple as when you hop into a police cruiser, you can turn the siren on," said Papoutsis. "You can have the flashing lights, you can have the sirens blaring. When you're on the criminal side, you honk your horn. That's very different than turning on the siren." Vehicles include an armored BearCat, a transport chopper, police interceptors and criminal muscle cars

He added that the objectives in the multiplayer games were clearly different, depending on whether you are a cop of a criminal. Also,there are some weapons and gizmos that are new to Battlefield.

"We have a variety of different weapons that are much more centric to the cops and criminals fantasy," he explained. "For instance, sawed off shotguns, that's something you haven't seen before in Battlefield. And of course, some of our new gadgets like the zipline and the grappling hook. You see those most of the time in any kind of cop-criminal type of set up in a movie or TV show. Those are prominent elements that are not only fun to play with, but they also provide interesting ways to traverse the environment."

Obviously, this game is a fantasy. But when you are looking for differences between cops and soldiers, the first thing you'll alight upon is the notion that one group is expected to exercise a certain level of restraint, a core tenet of all police drama, while the other exists explicitly to kill the enemy. Hardline is not a game of restraint.

"We thought about that," said Papoutsis. "So we have some nonlethal ways to take out the enemies. For instance, the taser, which allows you to take down an enemy. Then, if you interrogate that enemy, it gives you a tactical advantage by revealing their squad and other characters on the map.

"That's a pretty powerful thing to do. If you can handcuff somebody or tase them and then interrogate them, you get a pretty big bonus. It really helps you. That's one example of trying to make sure that if you want to play more by the rules, you can. But that requires a high degree of skill. You're going to have to be quick to do that, because if the criminals see one of their downed friends being interrogated, they can always take that person out so they don't rat them out to the cops."

Ultimately, he said, people enjoy the cops and robbers fantasy, and it makes sense to create a shooting game that fulfils such a desire. "The theme of cops and robbers is something that's really resonated with a lot of people for many years. Growing up, we play make-believe cops and robbers. You see it on TV. It's integral in our society.

"When we started talking about the idea of bringing that fantasy to life, it was really exciting for us because it resonates with people. It's something that most people have seen, whether it's in a movie or a television show, a comic book, a novel. These are themes that people know and can relate to. From our perspective as game developers, it's exciting to try and tell a story and bring a game like that to life."