The creator of Demon's Souls and Dark Souls returns with something new — but also familiar — in Bloodborne, the new action role-playing game from From Software and director Hidetaka Miyazaki.

I remember the exact moment that I realized that I loved Demon's Souls. It was in 2009, just after the game launched in North America. I had been struggling through early levels, enjoying my eventual victories, but wasn't yet sold on why I was putting myself through this ordeal.

Then I tried world three and my outlook completely shifted. The Tower of Latria was brilliant — a prison level that combined the game's challenging difficulty with horrific atmosphere and monster design that other areas in the game had not realized. I grew to love Demon's Souls as a whole, but The Tower of Latria has always stuck out in my mind as the clear high point of the game and one of the best levels From Software has ever designed.

From Software went on to create a spiritual successor to Demon's Souls titled Dark Souls and an excellent sequel to that earlier this year. Now that studio is working on Bloodborne, a game that breaks from the Souls titles in some key ways but maintains much of its legacy, including a clear call-out to the Tower of Latria.

Early in his E3 2014 demo of Bloodborne, Game Director Hidetaka Miyazaki brings up the comparison that immediately grabs my attention: "If you remember the Tower of Latria level in Demon's Souls, that's the kind of atmosphere we want to create with Bloodborne."

And so far, Miyazaki and his team at From Software are right on track.

As showcased in the game's debut trailer at the Sony E3 2014 press conference, Bloodborne has a gothic horror look that is as creepy and unnerving as it is beautiful. Miyazaki says From is going for a late 19th century vibe (though he clarifies that the game does not take place in the real world). Smoke pours out of sewer openings in cobblestoned streets lined with carriages. A thick green fog floats across the skyline, blotting out distant spires and clock towers — areas that, if From's past games have taught us anything, we will eventually travel to ourselves.

After Miyazaki shows off the gorgeous area for a bit, the main character runs forward and begins climbing up a ladder. Miyazaki is at the controls and uses the brief downtime to explain a little of the game's backstory.

Bloodborne takes place within a cursed city known as Yharnam. A sickness has consumed the city, transforming many of its citizens into beasts. Even those who remain human find themselves overcome with an unquenchable bloodlust, searching the city in large mobs, desperate for outsiders to prey upon.

Lucky us, in Bloodborne we will get to take on the role of just such an outsider.

Before long, Miyazaki's on-screen avatar is attacked by the first remnants of the cursed citizenry he comes across. These human-ish enemies shamble and groan like the undead, but they are also quick to attack. They leap out of shadows constantly, swinging pitchforks and torches that can set the player character aflame. They look straight out of Frankenstein.

Miyazaki's character is able to cut down these early enemies relatively easily using two weapon types that represent a break from what Souls fans are used to. In his right hand the character wields something Miyazaki refers to as a "saw cleaver." This is a trick weapon — a weapon that can transform in size and function. In its folded-up form it acts almost like a large, slightly unwieldy dagger; with a flick the main character extends the blade, giving it much more reach and allowing them to attack enemies from a distance. Trick weapons should allow players to switch strategies quickly without the need to swap between multiple weapons. 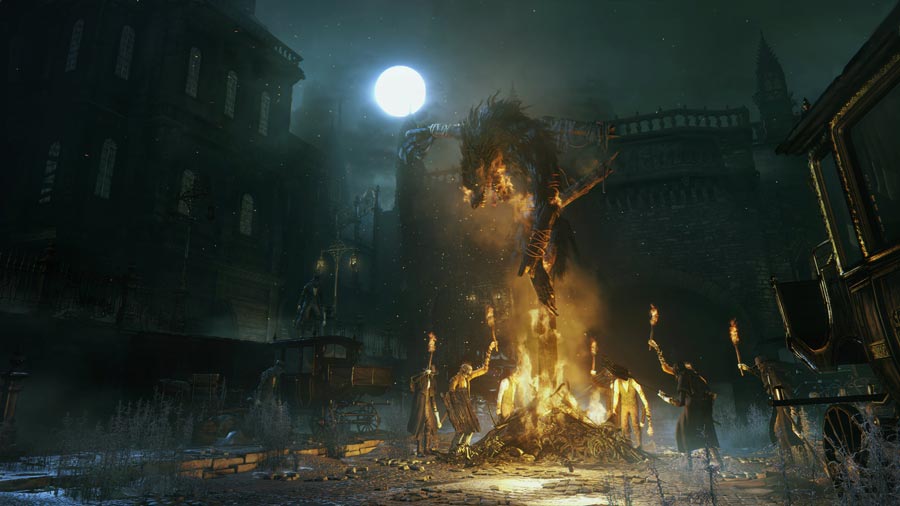 In the character's left hand is an even bigger shocker: a shotgun. Miyazaki notes that though From is bringing guns into the game, the shotgun is actually meant for close-range combat, and it doesn't even seem to be intended as a main weapon. He frequently uses it to briefly stun enemies or knock them out of attack animations so that he can then hit them with his saw cleaver. He also shows off a stylish dodge followed by a devastating counter attack with the shotgun.

Both of the weapon types on display in this early demo are examples of Bloodborne's key philosophical difference from the Souls games in its approach to combat: aggressiveness. As with those games, From Software is trying to build a system where combat is difficult and rewarding. Miyazaki says, "I want players to beat an enemy and think, 'Thank god that battle is over and I survived.'"

But the Souls games encouraged a very cautious, slow-paced approach to fighting. Souls fans will remember learning to enter every new area with a shield cautiously raised; in the E3 demo, a shield isn't even an option. Miyazaki says that Bloodborne will require a more active and aggressive style to deal with equally active enemies who often come in large groups.

At one point, Miyazaki stumbles onto a true mob scene. A giant group of infected citizens is gathered in a town square, burning a beast before it leaves to hunt for more victims. I can't think of any scene in the Souls games that had this many enemies on screen at once.

Rather than try to fight all of them off, Miyazaki takes a side path, killing a few crazed individuals along the way. Then he reaches a bell that he rings. This is the mob's cue to exit, and the square clears out, allowing him to progress. 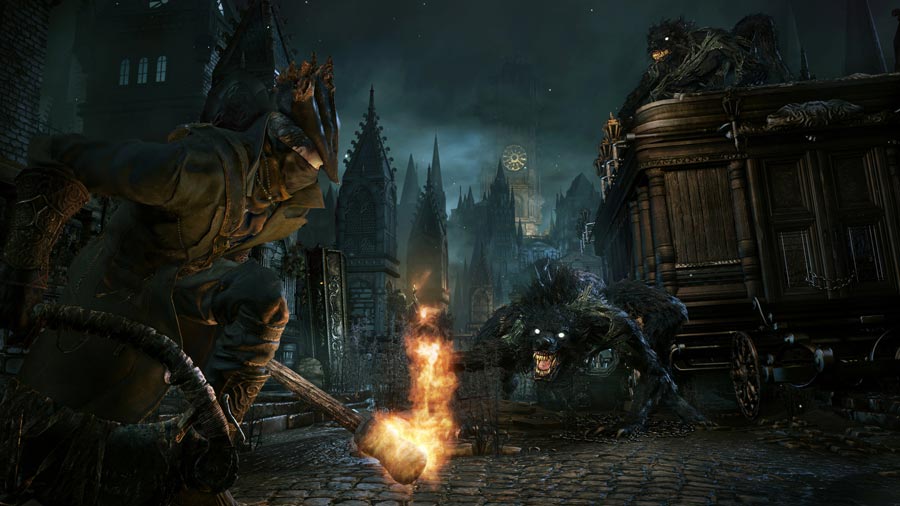 These sorts of environmental surprises are the things that will make Souls fans feel most at home in Bloodborne. Though Yharnam is a new world with a different tone from much of the series, Miyazaki says one of the core themes of the game is exploration of the unknown. He says the game will operate similarly to the first Dark Souls: It's a large world, but players will be rewarded for exploring every inch of it with shortcuts that wrap back around into previous areas.

As Miyazaki continues exploring the city, he comes across a friendly non-player character fighting giant, growling beasts. Here, he says, players have a choice: They can help the NPC or just ignore him and run ahead while he keeps the creatures busy. For the sake of saving time, Miyazaki chooses the latter.

Not much further ahead, he steps onto a bridge. Sure enough, this structure was visible from the start of the level, and a nearby shortcut allows him to quickly return to the town square. Miyazaki crosses the bridge but before he can reach the building at the other end, a humongous boss smashes down in front of his character.

The creature is somewhat reminiscent in size and stature to "the last giant," one of the first boss encounters in Dark Souls 2. But this new creation looks much more menacing and more detailed. Its arms and back are covered in what at first look like pine tree needles but then begin swirling and taking different strange shapes throughout the fight.

Bloodborne appears to be handling computer-controlled allies differently from the Souls games as well. Rather than allies simply summoning in helpers before a boss battle, Miyazaki says that they will show up as a result of your actions. For example, if he had chosen to help the character who was stuck fighting beasts earlier, that character would have appeared to help him take out the boss.

During the brutal battle, Miyazaki notes that this E3 2014 demo has been specially programmed so that he cannot die. "In the actual game, a player would have died a lot by this point," he says with a laugh. He goes on to explain that because he expects death to come so frequently in Bloodborne, he is "not planning to make [the death penalty] too severe." From Software hasn't finalized specifics on that front, but he wants to ensure those all-too-common deaths will not cause a player simply to quit.

A lot of things about Bloodborne haven't been finalized yet, in fact. Miyazaki says the team is still figuring out details on how progression and leveling up will work. In this demo version, enemies drop items and souls in a way that looks identical to the Souls games, but that could change.

Then again, maybe it won't. Despite embracing the breaks from tradition allowed by a new IP, Miyazaki is clear that the similarities to the Souls games are on purpose. "Players who enjoyed the previous Souls games will be able to find the same things they love here," he says. 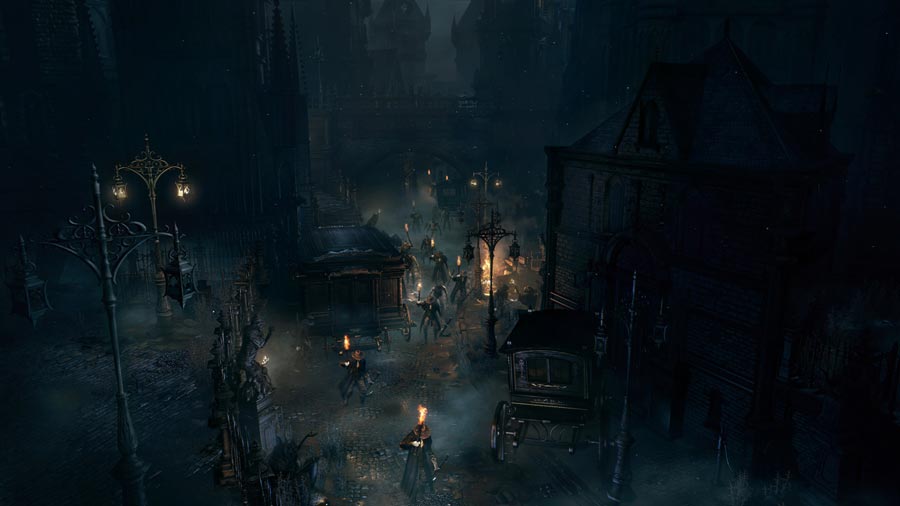 Those "things they love" include such series staple as full character customization. From the CG trailer showed at Sony's press conference and some early leaked footage, some people were concerned the game may star a single, unchanging protagonist. Miyazaki assures us this is not the case: Bloodborne will allow you to create you own character and will include tons of weapons and armor to adorn them with.

Miyazaki also promises a unique approach to online gameplay as the Souls games have become known for. He says that From Software isn't ready to talk about the online options yet, but that the team wants to build what it's calling an "open explorative community."

What does "open explorative community" mean? It's unclear, a choice of phrasing that seems purposefully obfuscated, like so much of Bloodborne and the Souls games and Miyazaki's approach to creating games in general.

It sounds unintuitive, but that approach has pulled me through three fantastic From Software games already. Based off what I've seen so far, I can't wait to add Bloodborne to that list.