Civilization: Beyond Earth updates the Civ 5 gameplay formula for a space-age far future in which players shape their culture and their tech choices.

Civilization: Beyond Earth takes grand strategy to the stars

Sid Meier's map-based tech-chasers and military sims pull together science, history, fun and competition to create games, like Civilization 5, that fold humanity's technological achievements into our deepest desires for domination and power.

Sid Meier's Civilization: Beyond Earth is the natural extension of a series of games that begin in a pre-agricultural age, pulling the player right up to intergalactic travel. It is the story of what happens when humanity ventures out towards new planets.

And so, instead of dealing with Earth-dwelling hordes of barbarians or sulky city states, we are faced with alien creatures, deeply alarmed at the arrival of hot-headed bipeds onto their lush-and-lava terra-firmas. Replacing great historical bosses like Gandhi and Elizabeth I, we have a panel of fictitious human leaders who represent the interests of their peoples from various nation-combinations from the likes of Africa, South America or Western Europe.

Technologies like the printing press, gunpowder and the stealth bomber are replaced by more speculative entries, culled from the fancies of futurologists, sci-fi authors and Firaxis' own bevy of pretty smart boffins.

At a recent play-through, I was allowed 50 turns to establish a first colony and try to gain some sense of how Civilization: Beyond Earth, due to be published by 2K Games this fall on Windows PC, Mac and Linux, differs from 2010's Civilization 5.

I've played about 300 hours of Civ 5, and so, of course, it's difficult to avoid drawing parallels with that game, especially as Beyond Earth's basic formula is exactly the same as its precursor. You found cities, forage, build, train units, expand, seek advantageous relations with neighbors, conquer.

The similarities are at the core 4x level of gameplay (explore, expand, exploit, exterminate). Anyone who has played a Civ game can jump right into Beyond Earth and start power-mongering. But there are subtle and interesting differences between sci-fi Civ and history Civ.

"We wanted to make an entirely new game," said co-lead designer Will Miller. "It's based on the fundamental idea of cities and units and improving terrain and diplomacy etc. We wanted this game to be rooted in that core experience. But it's important to us that this game is not just a skin or a redo of Civ 5."

Most startling among the changes is the replacement of a tech-tree with a tech-web. Previously, players would move along a pre-set highway of upgrades, switching lanes from time to time according to goals or personal preference. A new tech-web spreads out from a central point, offering 360 degrees of choices that softens the old game's propensity towards predictable upgrade paths.

According to co-design lead David McDonough, the tech-web was one of the game's first design decisions. "We want this game to be played in an exploratory and adaptive way," he said. "Not only is it about a non-linear progression but also it is designed to be larger than a single game, so that it's extremely difficult to get all the techs in a single play through. Your story is about your priorities. It makes the game more interesting and more thought provoking and it avoids the critical path route and makes sure the game does not become rote."

The technologies themselves do that Civ thing of improving the player's capabilities as a resource gatherer, military force, tech researcher and builder. They offer a layman's guide to the potentiality of the future, blending fairly obvious advancements with the esoteric and bizarre.

"Choosing the techs was a huge job but very satisfying," said McDonough. "We are big fans of science and science fiction. There are so many rich possibilities to draw from through great minds who have thought about this. We set ourselves a long reading list of great sci-fi. We chose the things that seem most exciting but are also plausible. It needs to be believable."

The technological path chosen also represents the player's "affinity," a catch-all term for philosophical values and likely future behavior. The most dedicated players will choose techs that enhance, as opposed to dilute, their affinity. 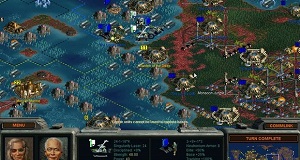 Civilization: Beyond Earth is not the first time the Civ franchise has taken to the heavens. Back in 1999 Firaxis launched Sid Meier's Alpha Centauri, based on improvements made to the Civilization 2 engine, which was launched in 1996.

It too featured rival leaders seeking to establish colonies in outer space, seeking out formidable techs while fighting against rivals and local lifeforms. The game was a critical and commercial hit. It has also been a rallying point for fans who wanted to see a more modern Civ game in space.

"We've wanted to make Civ in space for a really long time and I think our fans have wanted us to do this as well," said Miller. "It was the right time. We had the resources so we went for it." He said that the new game will have a "more optimistic tone" than Alpha Centauri, which dipped into some fin de siecle cosmic existentialism. "Alpha Centauri was a great pairing for Civ games around that time but we have learned a lot since then," added Miller. "Beyond Earth is not an iteration on Alpha Centauri. It takes some inspiration from Alpha Centauri but more so from the entire Civilization legacy."

Purity is focused on the glory of humanity and our (alleged) specialness. It idealizes the past and draws inspiration from totems. A Purity player is likely to be seen rolling across the alien tundra in the midst of a roaring tank-army.

Supremacy is no less aggressive, though its shiny-eyed zeal is reserved for all the gleaming possibilities of the future. Anyone who takes this route can expect to wind up in a Borg-like ecstasy of technology.

For the tie-dyers among us, there is Harmony which seeks to learn from the newly settled planet and from its lifeforms. This is the way forward if you don't mind mixing your beloved gene pool with some acid-drooling aliens.

"We want each game to be different," said Miller. "We want players to have to adapt to their surroundings and the actions of other players. The affinity paths get you to focus on different gameplay solutions depending on the situation. It really lets the player push their own personality into the experience. They are the leader and they get to transform the civilization with their own decisions."

Your affinity behaves like a signal to other civilizations competing for resources and space. Those that have chosen a different path are likely to be more hostile than those who empathize with your beliefs, assuming you are not both tussling over some meaty resource node.

For Civ 5 fans, the most frustrating part of the fantasy has been diplomacy, during which players seek to manipulate and manage seemingly sociopath, deranged, moronic rivals. It is, by far, the weakest part of the game, often coming across as a thinly veiled front for gameplay exigencies, rather than as a simulation of stone cold international relations.

According to McDonough, work has been done to tweak the diplomacy section, although a thorough overhaul doesn't look likely. "Yes, we have been endeavoring to make diplomacy more interesting," he said. "The leaders are fictitious and not historical characters so that gives us a little more room to work with, to make them change over time and gain perspectives based on activities in the game. We want them to be a lot less predictable and more sophisticated."

The big difference between this game and those set on Earth, is that Firaxis has sought to make life much less predictable and comfortable for the player. Alien cultures feature powerful warrior units that will attack cities, disrupt expansion and destroy improvements.

In my play-through, I spent way longer dealing with these blighters than I had expected. In future games, I will certainly seek to mollify them, and ally with other civs that have successfully curried favor with the giant creepy-crawlies.

"We like to think of the aliens as the third player," said Miller. "It's you versus the other players versus the planet. The way that you treat them will definitely affect how they treat you. But we wanted to keep it fuzzy because it's a wonderful destabilizing element."

For some Civ players, the stately progression from mud huts to global domination is the point of the game, with surprises about as welcome as an outbreak of heavily armed barbarians in the vicinity of a capital city. Such events are fairly rare in Civ 5, but in Beyond Earth, surprises will be part of the landscape.

"You may have your next 15 moves planned out but when a siege worm shows up on the border it changes the entire calculus and you really have to stay on your toes," added Miller. "Civilization 5 goes to great lengths to make sure that every system is as transparent as possible but in this game we're diverting course from that. We want to introduce this non-deterministic player versus environment perspective in to Civ. We wanted it to feel like a different game and so we have really mixed it up at a fundamental level."