Bioware returns to its medieval fantasy franchise with an epic world of party-based combat, exploration, character dialog and dragon slaying

The creators of Dragon Age: Inquisition are making a world in which heroes face a series of choices, few of which carry simple consequences related to concepts like "good" or "bad."

Sure, there is always an argument to be made for sacrificing the lives of others for "the greater good." And there are always players who will shrug their shoulders at any digital massacre of innocents that contributes to the goal of winning.

But anyone who wants to truly engage with this vast, colorful world is going to want to come armed with feelings, as well as longsword, bow and magic tricks.

"We've brought fresh modern thinking to our designs, to bring freedom to our player," said project director Mark Darrah. "Choice will not be black and white but grey. We're moving beyond choice, to dilemma."

Dragon Age games are party-based role-playing games, in which you lead a group of warriors against enemies, always talking to them and to other characters along the way.

These individuals will let you know the consequences of your actions, selected from multiple choice wheels in the time-honored custom of BioWare games, with their background grumbles and complaints. Dialog, most especially background chat, has always been a strong point of this series, written by David Gaider.

"From an emoting and writing perspective, we have 20 years of experience in writing characters that behave in believable ways," added Darrah. "A lot of what makes a character believable is not what they look like, it's how they act and what they say. You can watch a cartoon and feel emotion about these drawn little characters that are on little bits of paper."

At a recent Electronics Arts-hosted event, Darrah talked about BioWare's hopes for the new game and showed off some assets. There was no opportunity to play the game, which will be heavy on exploration, combat and dialog.

How gaming is changing acting 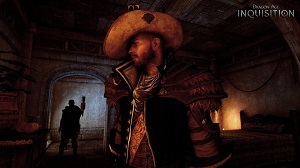 Darrah said that improved voice acting and facial capture tech is advancing games like Dragon Age: Inquisition, and that games are drawn from, and adding to, acting traditions.

"We have traditional cutscenes, which is a lot like the way you would act on the screen or in television, but more and more what you're getting is ambient acting, where you're not taking control away from the player.

"There are people in the world who need to act and convey emotion when the camera isn't pointed at their face, when it isn't letting them be the front and center and perfectly framed.

In a lot of ways, it might be more like stage, getting more, something more like stage, where you don't know where the person is looking. Up to now, we've been more like film. I think both styles will survive as acting mediums and actors and acting will have to do both for games, and maybe, ultimately become something else again.

Part of the ambiguity inherent to Inquisition is the central character, who emerges unscathed from a cataclysm and is heralded as a saviour, by some, while others are suspicious and hostile. You can choose to play up your status as a chosen one, even while you are unsure of your own destiny or origins.

"There's an interesting undertone here of people in the world believing that you have been sent as a leader by the maker of the universe," explained creative director Mike Laidlaw. "As a player, I have the option of saying, 'Oh yeah, I'm the chosen one' or asking what the hell they are talking about. It's up to the player."

Like all good fantasy, Inquisition offers a theme that people can relate to, although Darrah stresses that it's up to the player to engage with its underlying ideas. "Previous Dragon Age games were definitely about the theme of sacrifice," he said. "Dragon Age: Inquisition is more about leadership, because you're leading the Inquisition. Faith is a big part of it; the role of faith and how the player interprets that. They're put into a position where they might be a chosen one, or they might not be. They might just be circumstantial, and a lot of the way the game will react to you is how you react to that event."

Video games are notorious for serving up standard character types, and few genres are as guilty of this than fantasy, where classes and races tend to hover around stereotypes. But Dragon Age is taking inspiration from a new wave of populist fantasy that seeks to subvert tropes, wants to move on from the cliches.

"There's always a danger that you fall to strongly into an archetype," explained Darrah. "You want that touchstone where people can understand a character, but there's the danger that you end up with a character that's just like, oh it's the tough guy and he's just 'durr durr durr.' You need to twist that and massage it and make it something that's your own.

"Dragon Age has always been something that was built foundationally off the really strong basis of fantasy, dwarves and elves, magic. But it's taken a very different look at those things. In our case, elves are a fallen race. They used to be immortal, they lost that. They live in ghettos in the cities, they're oppressed. Dwarves have become this very insular, political society that's cut itself off. We've taken those tropes and worked with them so they're still recognizable, but they let us tell stories in a different way. We don't have to explain what some brand new race is. We can explore some more interesting, deeper themes."

Standards have been raised as more people come into games looking for interactive worlds that echo the fictions they enjoy so much elsewhere. It is difficult to imagine people who play Inquisition or Skyrim, somehow not being invested in non-interactive fantasies like Lord of the Rings and Game of Thrones. Many will draw their comparisons with these Middle Age-esque giants, rather than the 1990s RPGs, like Baldur's Gate, from whence today's games sprang forth. In turn, Dragon Age: Inquisition finds itself at the precipice of acceptance outside games, at a larger scale than the previously released comics, novels and one Japanese CG anime movie.

"Since the Lord of the Rings movies, fantasy has become quite mainstream over the last five to 10 years," said Darrah. "We are well positioned to be one of the great fantasy IPs, not just in gaming but in entertainment, period."

New technology and larger budgets have also made demands on art departments, with a vast trove of environmental assets building a world that is five times bigger than Dragon Age: Origins (2009). Even Dragon Age 2 suffered from repetitive environments and a cramped feeling, Post-Skyrim, there is no option for publisher Electronic Arts, but to create breathing room and variety. Trailers have lingered lovingly on gorgeous landscapes and ornate interiors, all of which are populated by people and wildlife.

"You can't look at a game like Skyrim and not think about how impressive what they've accomplished is," said general manager Aaryn Flynn last year. "We're always influenced by these games, especially in a relatively tight-knit genre like RPGs."

Comparing the assets so far released by BioWare, with footage of those last-gen games in the series, it's clear that looks and scale have improved a great deal.

"We don't just have bigger areas but areas that change and evolve and are living," said Darrah. "There's more wildlife, more ways for the environments to evolve based on what you're doing as well as the actions of other creatures and characters in the space. That's really the big thing that the next generation gives us.

"The towns are more fully populated, the wilderness move more and there's more motion drawing your eye. But also they give you a resource. So we have a very deep crafting system in Dragon Age Inquisition. You can hunt down these foxes and skin them for their pelts. Not only is it immersion, a visual thing, it also gives you an additional layer of gameplay.

"This has really been the first time we've been able to make the game that we've really want it to be. We've only been constrained by the edge of technology and always been a little bit having to hold back, and we're not really holding back on Dragon Age Inquisition."