Moments ago on stage at its E3 press conference, Sony announced Entwined, the first game from its new studio Pixelopus, with a surprise punchline — the game is out tonight.

It's a reveal that's been in the works since January, in one form or another, when Entwined creative director Dominic Robilliard took a meeting with Sony America product development head Scott Rohde to show the progress on the game. Rohde liked what he saw, and soon discussions turned to not only showing the game at E3, but releasing it the same day.

Having their Beyonce moment, jokes one Sony representative, instead of a traditional pre-launch marketing campaign. Launching the game like Sega did with Saturn almost 20 years ago.

The team wasn't sure at that point if it would actually happen, and didn't want to rush development since the group had never shipped a game together. But five months later, the plan came together. Seven days ago, Entwined finished QA testing. Six days ago, Polygon visited the team to learn what led to this point.

The story behind Pixelopus began in 2012, shortly after Sony released adventure game Journey.

Sony's Santa Monica Studio published the game while thatgamecompany handled development, and it was a hit. By the end of the year, the game won game of the year awards from sites including GameSpot, IGN and Joystiq. It was far from the only example of Sony Santa Monica working with small independent teams, but it became the highest-profile example.

Around the same time, Sony's Foster City product development group started wanting to replicate that success, looking to work with more small teams in addition to its base duties of supporting big studios like Sucker Punch and Naughty Dog. 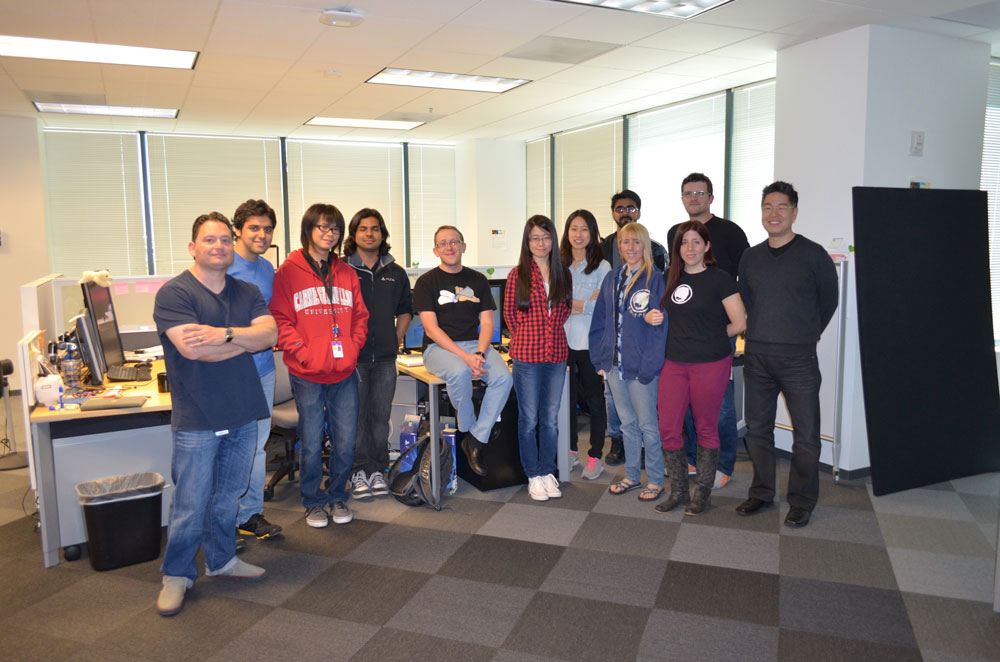 So the team in Foster City started branching out, looking for smaller projects that could take more risks. It landed on games like CounterSpy, a side-scrolling action game from developer Dynamighty, and Doki Doki Universe, a group of creative projects from developer HumaNature.

Fast-forward to July 2013, and Sony offered six students from that Carnegie Mellon program jobs in its Foster City studio — which would soon become San Mateo Studio after moving offices. The higher-ups later added three students from San Jose State and a pair of industry veterans to lead the team, and put them to work, forming Pixelopus.

Shortly after assembling the team, Sony's higher-ups asked the group to create a series of prototypes.

Eric Zhang, a former Carnegie Mellon student, headed up one of those where the player controlled two dots, each tied to an analog stick. The player moved the left dot around the left half of a tube, and the right the right half, but the two could never touch. And as the dots moved forward through the tube, the player needed to position them to dodge oncoming shapes looking like Pac-Man and find the gaps. A simple idea that, initially, didn't thrill the higher-ups.

"Early on, it wasn't the frontrunner," says executive producer Alex Lee. "It was a long shot that we kept alive." 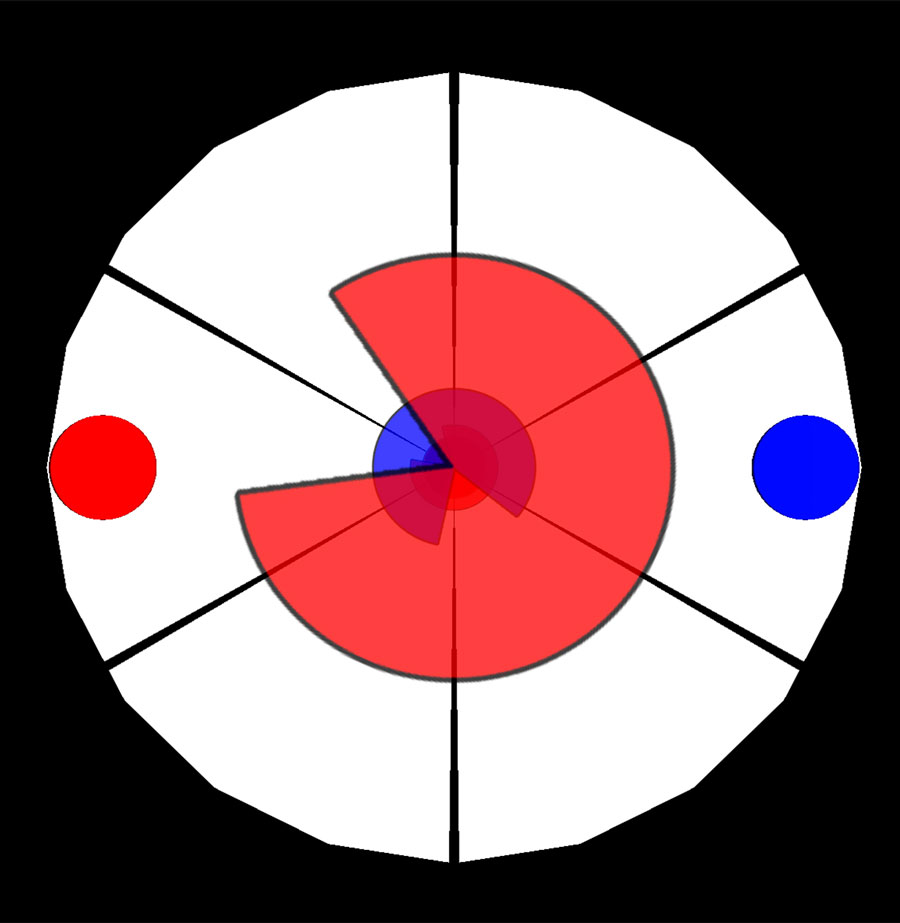 Around that same time, designer Jing Li — also from Carnegie Mellon — remembered a story from Chinese mythology about a bird and a fish who fell in love but couldn't be together, and team members realized that the story fit Zhang's prototype. If each dot represented one of the animals, they had a story that could be represented via the mechanic of two characters working together who could not touch one another.

As the team experimented with an abstract art style, the higher ups became sold on the idea. They liked its balance of being artistic yet simple enough that the team could produce it quickly. By September, the team put the other prototypes aside to develop Entwined.

Over the next eight months, the team refined its ideas. The art for the bird and fish took on a semi-robotic look, while the design evolved to allow the fish and bird to morph into a dragon at the end of each stage. Li generated a "mood curve" similar to the one thatgamecompany created for Journey, to give a sense of the emotions players should feel through each of the game's stages, and developed a scaling difficulty system running through each of the stages.

Pixelopus calls each stage a "lifetime." The idea being, in each stage players control the spirits of two different creatures, and each time their spirits take the form of a bird and a fish.

"It will make sense when we show you the game," says Robilliard.

Entwined is simple to pick up. The left analog stick controls the fish; the right, the bird. And you move them like dots through various shapes as you fly forward. It's evolved since the early prototype — now you aim for the shapes instead of for the gaps — but the concept remains the same.

You start by making sure the fish and bird hit the right targets, then then game evolves by throwing patterns of targets for you to hit in sequence, so at times you have to 'roll' the stick to hit each target in the sequence. Like a rhythm game, the first time you see a complex pattern if takes you a second to think each target through, but over time you tend to see the patterns instead individual notes.

It feels like a more forgiving version of Super Hexagon or Dyad, but with more character. You can fail each stage in the sense that you won't get the payoff of being able to turn into a dragon at the end, but you can't die in the story mode. Pixelopus designed the game to have a zen quality, where players can zone out as they get into the game, while still relying on skill-based gameplay.

To that end, players looking to zone out can attempt the game's Challenge Mode, where they can attempt to play as long as possible. A timer builds a score, and the game only ends when you make three mistakes.

In the story mode, at the end of each level players have the chance to morph their two spirits into a dragon, at which point the controls change and the game becomes about flying freely rather than being restricted to a tube. The dragon can also shoot colorful streams out as it moves, allowing players the opportunity to record video clips and relax before moving on to the next stage. The game contains nine stages in total, for what the team estimates is about two hours of play.

While we haven't seen the game's ending as of publishing this story, team members say they kept the storytelling to a minimum, offering a brief cutscene up front and then leaving the rest of the story open to player interpretation.

The future of marketing

With Entwined done on PS4, the team at Pixelopus has turned to PS3 and PS Vita ports, as well as a mobile version that will be based around the game's Challenge Mode. Originally, the team had hoped to have all three PlayStation versions available on the same day, but plans change.

"I think it's partially a risk management thing," says Lee. "You've got a new team here. These guys are fantastic at prototyping. But the teeny-tiny intricacies of shipping something on a PlayStation [take time]."

Team members estimate the PS3 and PS Vita versions will be out between two weeks and a month from now, and they will all be part of a cross-buy program so anyone who buys one version will get the other two.

For Sony, the game's surprise launch is both something fun to offer at E3, and a test to see how this style of marketing performs.

"We're certainly open to doing this again," says John Koller, vice president of platforms marketing at SCEA. "Personally I think there's a lot of opportunity here for not only a platform like us, but also for gamers to be able to enjoy such unique experiences that they may not have gotten otherwise."

If it goes well, Koller says Sony would also be open to doing something similar with a bigger-budget game. "That, as you know, does go against a lot of the rules of marketing, but the rules of marketing should change," he says. "I think they need to evolve, and maybe there is an opportunity to do that. The opportunity with that experience I think would probably start first with a very rich communal community, or social-based experience that has long legs. So if it's a deep, rich game from a large game developer, you probably could do it this way. If it's a game that is new IP or requires a bit of runway, as it were, it would probably need to have a little bit more marketing on the front end.

"So it's a little bit of an 'it depends,' but I think there's an opportunity, certainly, to do it this way. It will remain to be seen if that ends up come to fruition, though. I think the first step is to see how well this does."