The Fable universe has lost its Molyneux, but Lionhead Studios is finding its footing in Fable Legends' innovative multiplayer gaming.

This might be the first time that Lionhead Studios' future has had a clearcut path since Peter Molyneux, the former founder and once high muckety muck of the Fable franchise, left the company in 2012.

Now under the command of former massively multiplayer executive John Needham, the Guildford-based company is turning its focus to a new games-as-service philosophy and opening up the Fable universe to both competitive and co-operative play. Fable: Legends, which the studio is right now describing as a kind of Fable-meets-Dungeon Keeper multiplayer game — a slice, in other words, of both the past and future of Lionhead's gameography — is for all intents and purposes a glimpse of the studio-to-come.

In Fable: Legends players choose from a roster of possible characters of the usual RPG ilk — a variety of class types, including pre-made ranged archers, mages, healers and tanks — then enter a third-person realm where they manoeuvre through the battleground and fight their way to a certain objective. But the biggest change for the studio is the introduction of four-player co-op.

"The biggest change for us is how we've worked to connect players to games online," Needham tells us, describing the steps the studio is taking to remain relevant in a market of new consoles.

Lionhead's staple series has so far only tested the waters of multiplayer, with the last two entries offering just a crumb of added-on co-operative play, stuck in the shadow of its much larger single-player campaign. But there's been an injection of new blood into the company, says Needham, who like him have experience in online gaming.

Needham himself worked as CEO for Star Trek Online developer Cryptic Studio, then Marvel Universe Online's Gazillion Entertainment, and likewise the studio has brought in people who "know how to leverage the cloud, how to iterate quickly, how to work on building new IP," he tells us.

It's in that spirit that Fable: Legends is from a technical perspective being developed with a massively multiplayer-like mentality.

Much like massively multiplayer titles, we're told, this game faces the same obstacles that rear their head in these genres: primarily, game designer David Eckelberry tells us, "balance is a struggle." In other words, when it comes to character design, the development team approaches their work with the mindset that "every character is broken." With each update to one, a fix needs to be made to another to keep the balance in check. This, however, is the basis of Lionhead's new service plan.

Right now, Microsoft's initiative is for "games to be more than just games," game designer David Eckelberry tells us, referring to the studio's ongoing relationship with the company that bought them in 2006. A few years ago their partnership resulted in experiments with the Kinect peripheral; Now, says Eckelberry, Lionhead will only use Kinect on Legends if it makes sense to. Microsoft is instead aiming for a transmedia route: Television, books, comics and so on.

With that in mind, the studio is bringing television-style lingo to its regular content updates, which are being called "seasons" and will be brought out on at least a monthly basis — "more regular than typical massively multiplayer games," Eckelberry adds.

"We want to create a franchise that stays around for years to come, and we already have six months worth of seasons planned," he says, each of which will include new playable characters, villains and plotlines. Come launch, the game will include 15 battlezones which will be replayable through treasure accumulation and its looting system. Lionhead may even implements a microtransaction system, but no plans have been made official. 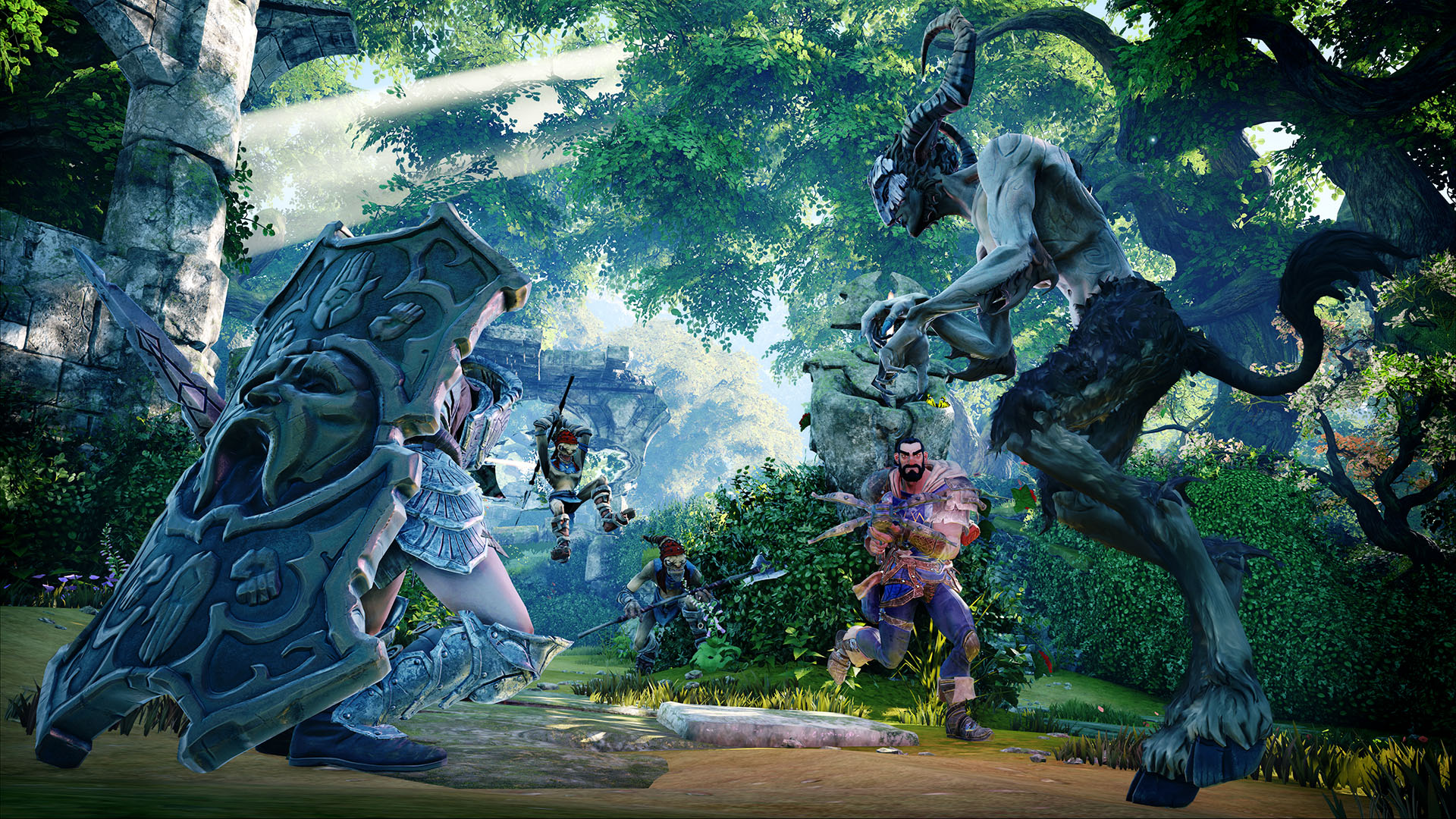 While the studio appears to be taking its influence from the reams of successful free-to-play multiplayer companies, the likes of which include Riot Games, its design tactics are unlike traditional multiplayer. Lionhead is adopting what the company is calling asymmetrical design. The developer is combining co-operative and competitive play by putting one player in the role of the villain, while the remaining four players work together to bypass bombs, enemy NPCs, and other tactics deployed by that villain character. As a result, no one game is the same and players have the autonomy to win a game based on making their own independent plays in a single match.

That is the result of the changes to the map implemented by the playable villain alone. The villain works alone, placing traps, mines and enemies across a top down map, and triggering bombs and gates as the heroes work their way through the large-scale arena. The result is a cross between third-person action and tower defense depending on whether you align with the heroes or the villain. This role is so unlike that of the heroes that Lionhead plans to make the role of the villain playable via touchscreen devices.

"Moon on a Stick," one of the game modes, makes use of the engine's new features by funneling players to a climactic end point where they must survive night cycles which trigger waves of enemies, then spend the daytime period activating statues around the map and eventually take down a huge boss. While trying to reach this end goal, the players also have to juggle all of the firepower thrown at them on the fly by the villain, who can see their characters on his map, along with their health and the number of potions they carry.

Fable: Legends is scheduled to come to closed beta later this Fall. The game was first announced during last year's Gamescom, alongside the promise of SmartGlass control for those who take on the role of the Villain. So far, Lionhead has yet to announce a launch date, but further information is expected this week during E3.