Lara Croft and the Temple of Osiris

Crystal Dynamics has made a name for itself through reinvention.

In 2010, it released Lara Croft and the Guardian of Light, a reintroduction to one of gaming's most iconic characters. In 2013, the franchise was once again given new life with Tomb Raider — a gritty story based around the explorer's roots. Two different properties, two very different images of Lara that serve the same purpose: to rehype the character and put Crystal back on the map.

At E3 2014, the developer announced two new games encapsulating the brand: Rise of the Tomb Raider, the sequel to the 2013 reboot of the franchise, and Lara Croft and the Temple of Osiris, a return to the isometric adventure style seen in Guardian of Light. While Rise of the Tomb Raider was given center stage at Microsoft's E3 2014 press conference, Temple of Osiris was quietly debuted during a livestream after.

That doesn't make either title less exciting, but follows up on Crystal D's "one-two punch" plan. In Amos' mind, it all comes down to a change in tone. Where people once spent their time wondering about the studio and its work, they're now looking forward to seeing what's next.

"We've had a very, very good ride getting to this point," Amos said. "Coming into this E3, people are now like, ‘oh my god what is Crystal going to do next?'"

Lara Croft and the Temple of Osiris sees the return of a character fans have known since the series' debut: the brash, curious explorer with a knack for digging up mysteries. The game borrows heavily from Egyptian myths — specifically the story of Osiris and his devious brother Set.

"Egypt was one of those fan-favorite locations," Amos said of the game's latest setting. "They've asked us to go to Egypt for all Tomb Raider games since we had an Egyptian episode a long time ago."

Egypt afforded the developer the chance to add powerful, demigod characters and artifacts for Lara to hunt for. The team pulled from knowledge of Osiris and his family and wove in their own details to give it the Tomb Raider touch.

"That's what Lara does," Amos said. "She seeks out those mysteries in the world and then puts them in reality. I'm playing through something that used to be legend, and now it's actually a real thing."

In this newest title, Lara is joined by a rival archaeologist named Carter. The two break into an ancient temple and are marked with a curse of death; however, by aiding two demigods named Isis and Horus, there may be a way to save themselves.

The game's biggest change from Guardian of Light is its support for up to four players; in addition to Lara and Carter, players will also be able to take control of Egyptians Isis and Horus, each of which is armed with special powers. Amos calls the Egyptian characters the game's magical class; both wield the staff of Osiris and can use a magical shield to deflect attacks or help characters climb to new heights.

"Looking at what we did on Guardian, which was so much fun with two players," Amos said, "we just loved that experience of two people on a couch or online being able to play together and cooperate together. We needed to push ourselves."

Four players in high fidelity on next-gen was "a big deal" for Crystal Dynamics, Amos said. The world itself is more expansive, and players will have much more freedom to explore.

"There's a bigger, broader canvas for us to paint on this time," he said. "On top of the customization, since you have this squad of people you can now tune your amulets, your rings, and you can actually change the behavior of the power-ups. It adds quite a diversity to the kind of things you can do that you couldn't do before."

If there's one thing Crystal Dynamic aims to do with Lara Croft and the Temple of Osiris, it's bring players together. But, maybe not always in the spirit of cooperation.

Temple of Osiris features a friendly-but-competitive hook in which players scramble over each other for resources. The game's loot system includes items ranging from common to legendary, and enemies will typically only drop enough for one. Different gear gives players the chance to customize their character how they see fit, and players won't be punished by losing items if they decide to swap between characters. However, certain outfits or items will be specific to different classes of characters.

"It was really about how can we get more people connected, because we think that kind of co-op experience needs to be shared."

Players can nudge each other into deadly situations by chucking a bomb their way or dropping them onto spikes, but there's no real punishment for each death. They'll respawn shortly after death, and as long as one person still stands, the level can be cleared.

"[When] you respawn there's a cost to it, so you could actually lose a little bit of the loot you picked up," Amos said. "But we try to make it as friendly as possible in the way that we don't want people online screwing with each other saying, oh, this is just no fun. You can make private matches, you can kick people out if you're not having fun with them, and that's for those local co-op or online. We give players control over that kind of stuff."

Unlike the last game, Temple of Osiris will also include an overworld; players are no longer confined only to tombs. Crystal Dynamics wouldn't elaborate too much on the game's overworld, but simply said that players would be able to explore a large map. Specific levels, meanwhile, will change depending on how many players are present.

"The more people we have, we want to make that co-op convenient to do and also fun to do," Amos said. "We want to inspire people to join together to do things, but also we want to make sure everyone can play front to back the entire game." 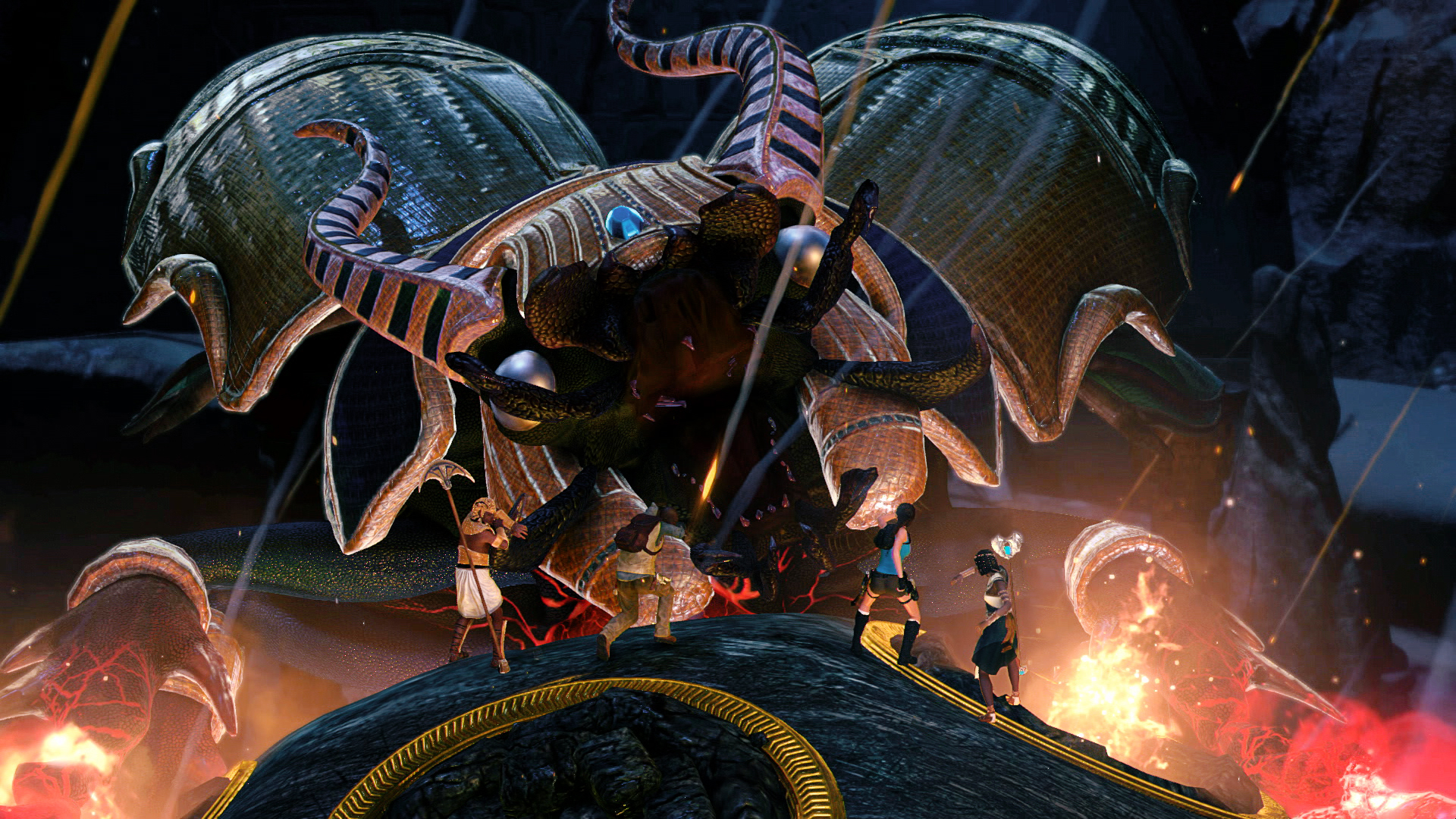 TWO SIDES OF THE COIN

Crystal Dynamics is very firm in differentiating the Tomb Raider series from its Lara Croft entries.

While Tomb Raider is heavily rooted in reality, the Lara Croft tiles explore a more fantastical world. If the former is the story of Lara's first adventures, the latter is a place where nothing fazes her anymore. Amos compares the seemingly split personality to different Marvel character representations in comic books and films.

"The fans know that's Lara Croft, and this is her version here," Amos said. "I think we have a very clear understanding of why isn't she emotionally distressed when she's being chased by a beetle.

"This is Lara who's been through all of that muck. She knows what's out there now and she's getting used to it, and this is the excuse to go crazy and have fun."

That's the benefit of keeping Tomb Raider and Lara Croft as two distinct entities, he said. The styles are worlds away, and each version of Lara even features different voice actresses; Keeley Hawes will reprise her role in Temple of Osiris.

It all stems from Crystal D's desire to tell different kinds of stories and appeal to a wider audience. Temple of Osiris is more for the people who want arcade-style action to kick around with friends.

"Getting four people on a couch, it's hard for us to tell an emotionally gripping origin tale if the four of us are trying to blow each other off a cliff with bombs," Amos said. So this is that excuse for the fun arcade action."

While Guardian of Light served as the turning point for Crystal Dynamics to being Lara Croft back, The Temple of Osiris is more of a throwback. It's for players to romp hand in hand with nostalgia as they guide a pistol-wielding, ass-kick Lara Croft through impossible situations — from kicking it with demigods to running away from giant beetles.