Madden NFL 15 turns its focus to making defense fun in its second year on the next generation.

The defense presents the opening argument for Madden NFL 15

Ten years ago, Ray Lewis graced the cover of Madden NFL 2005, the last edition of EA Sports' glamour franchise to garner anything close to universal praise. The Ravens linebacker was an apt choice. That year the game introduced the Hit Stick, a control exclusive to defense. In the years since, Madden has seen a steady turnover of promises and fixes and gimmicks, like the infamous "QB Vision Cone" one year, or "Weapons" in the next. But the simplicity and brutality of the Hit Stick has endured for a decade.

Fitting, then, that on Friday fans voted Richard Sherman, the Seahawks defensive back, to the cover of Madden NFL 15, where he will become the only defensive player other than Lewis to have the packshot all to himself. On the tenth anniversary of the landmark Madden NFL 2005 — it was the overall game of the year at the first Video Game Awards — the series will try to make defense fun again.

"We knew defense is something we had to get to," said Rex Dickson, the creative director for gameplay for Madden. "Initially, the way we took this on (with) a few of my top designers and top engineers, we just said, 'Pass rush and tackling.' Those are two things people struggle with, and we need to make better."

Tackling might sound like an easy task given the nature of the assignment: just run your guy into the other guy. In a video game it never works like that, and it's partly because of the perspective of the camera angle. Longtime Madden veterans still overrun the play so often (and most do not use use the "strafe" modifer to square up to a defender) that they describe themselves as a danger to their own team.

This year Madden will introduce a player-lock camera on defense, previously seen in NCAA Football 14, that swaps the perspective from a zoomed-out view with a defender moving down (on the screen) to a closer angle with the defender driving up, or into the screen, a more natural gameplay direction for any game with a third-person perspective.

Additionally, there will now be a tackling reticle and — hold on to your helmets, a vision cone — underneath the player-controlled defender. The vision cone shows what the defender recognizes; the reticle starts lighting up about 5 yards away from contact. At the outer range, a player may attempt a diving tackle that, even if it misses, is stronger than the dumb-fire dives people bomb at runners all the time. Closer in, the defender may go for a bigger hit or a wrap-up. Pressing X/square or using the Hit Stick starts the action, with the usual risks to those going for the big highlight.

Dixon, in a presentation, said the cone, reticle and camera assistances increased user tackling by 70 percent in tests they ran. I asked if he was concerned that this might throw Madden's online play — where football rarely resembles the game played in real life — out of whack. He said top online players with long, successful careers now work on the development team and they've blessed it, so he's not concerned with balance. 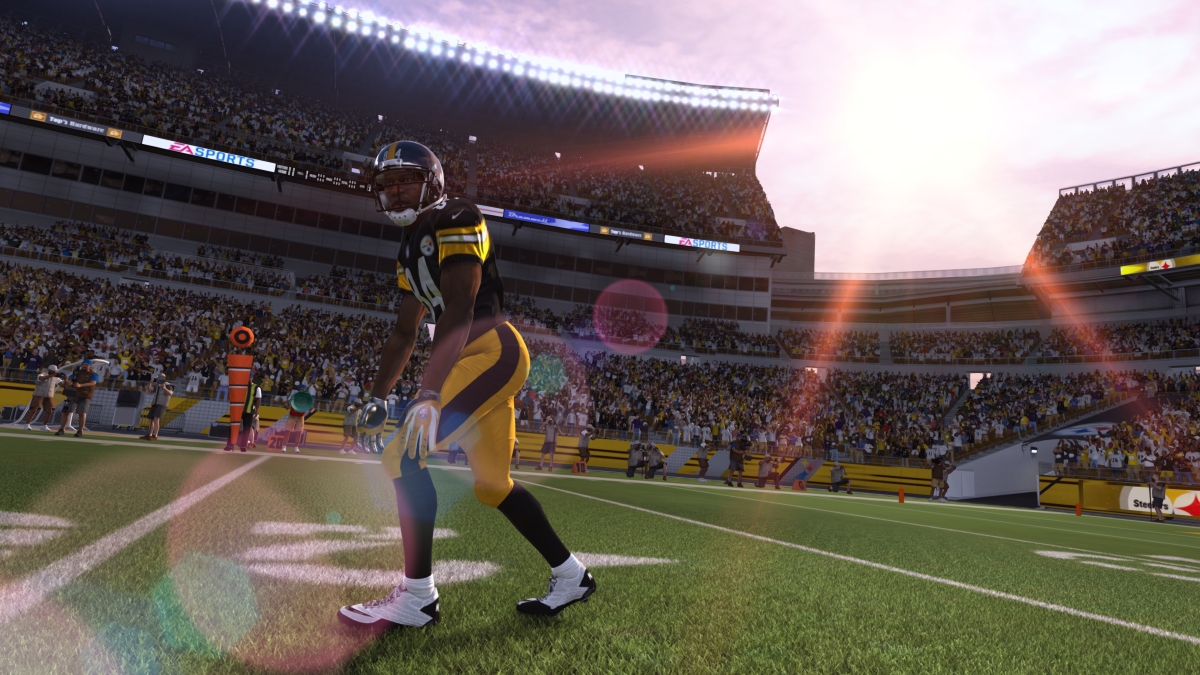 This is nice but it's geared to open-field tackles, and in Madden the advantage is consistently with the ballcarrier — particularly in multiplayer — who can swerve at the last minute. Most play defense by trying to attack the quarterback. "Our telemetry told us that more than 50 percent of our users who do play defense," because you can just call a play and let the AI take over, "do so in the box," Dixon said. That's one of those ESPN terms for the space between the defensive ends. Basically, the defensive line and linebackers. They hurl themselves at the offensive line, almost always taken out of a play as soon as they're engaged in a block.

Madden NFL 15 will introduce some new shove and grab commands for linemen to allow them to disrupt a play even when they're engaged in a block. Moreover, defensive linemen can try to steer their blocker with the joystick, rather than use the longstanding "swim" and "rip" moves to overpower a blocker, which most users spammed without knowing how to use anyway. (For those who do know them, they remain).

Recognizing that most people don't play defensive backs, Madden NFL 15 has tuned the defensive secondary, the ones who track down receivers, to provide more security when the pass is in the air. Defensive backs who are more likely to hit, play the man or play the ball will do so, Dickson promised. Other goodies: The defensive line can jump the snap, at risk of committing an offsides penalty. If they do time it right, they can destroy a play for a huge loss.

Dickson vows this won't be the kind of now-you-see-it-now-you-don't stuff Madden has tried in the past. Dickson, a veteran of first person shooters, came to Madden three years ago. "I had to put together a 3 to 5 year plan when I got here," he said. "Because you know, in the previous generation, that whole, like, it's one year and then the next year it's gone? Or two years later it's gone? What we realized is we're not making traction doing it that way. We have to keep building foundational pieces that we can build on."

So Madden NFL 13 was the year the game introduced real-time physics, Madden NFL 25 refined it and added some special moves so runners could exploit it, and now it's time for the defense. The game's skills trainer will support playing defense intelligently, walking players through how to to recognize a particular coverage scheme — most fans say Cover 2 without knowing what the hell it really looks like — and what weak spots will always be there in that alignment.

Defense isn't the only realm getting attention. Playcalling, which EA Sports attempted to streamline with GameFlow in Madden NFL 11 but barely supported afterward, is getting another look. This time, users can choose to see recommendations based on what the AI would call in the situation, against the defensive personnel on the field; what a majority of users call in the same circumstance; and then the favorite play the user himself goes to in the situation. The other traditional means of navigating the playbook still are there for the hardcore, but this is meant to make a play call more purposeful, rather than something picked at random. If a player knows he's calling a pass to beat a cover-2 defense — and has been coached to know what that looks like — he'll make a better and faster decision. At least, that's the thinking.

Elsewhere, Madden is getting an upgrade in its broadcast presentation, which took a step back last year largely out of neglect. Brian Murray, formerly of NFL Films, has been hired to lend variety to the game's camera work and broadcast features. Those who declared NFL 2K5 the best of all time because it had a halftime show and Madden doesn't will need something else to press their agenda, because a 90-second halftime highlights-and-stats package is coming to this game, hosted by Larry Ridley, who added commentary to the draft in Madden NFL 25.

The presentation seemed to be focused more to camera angles and shot variety, rather than new animations between plays. In the post-play cinematography, I still saw about three to four guys, all from the same team, interacting each other, which just never is the case in a contact sport of 22 guys. Still, graphical overlays, player introductions (which include live footage when key performers take the field for the first time) and other broadcast elements give the presentation a necessary boost, even if the overall benefit will be seen mostly after repeated play.

Probably my favorite detail of presentation is the fact the generic stadium jumbotron — whose screen simply mirrored the game's main camera, creating a hall of mirrors in replay — is no more. There will be a live stadium big screen during and after play, Murray said, and further, Madden NFL 15 got the stadium graphics packages that most NFL teams use. It's not a game-making or -breaking feature but it does show a nice attention to detail.

Dickson, Murray and anyone attached to Madden know the series' reputation for making promises and halfheartedly delivering on them — or delivering things no one really asked for. There was a recognizable restraint as Dickson described the new features. He backed up the decisions with telemetry, not overused adjectives like "visceral" or "realistic." And Madden NFL showed a lot of improvement in core gameplay just from the Xbox 360/PS3 generation to the Xbox One/PS4 last year, earning it some benefit of the doubt this year.