The punishingly hard, one-shot-one-kill, one life Rainbow Six is back. And it's coming with an interesting new feature: Siege.

In the multiplayer mode of Rainbow Six: Siege, unveiled today during Ubisoft's press conference, players will take on the role of either the game's elite counter-terrorism Rainbow Six soldiers or a group of terrorists.

And those roles aren't just different looks for the same people with guns, this is a game designed to be asynchronous, a game of attack and defense.

Players who take on the role of the terrorists are given an allowance to spend on fortifying their base. They can use barbed wire, set up metal barricades, nail shut windows, drill peep holes in walls, set traps. Meanwhile, the Rainbow Six team has the ability to scout around the house, trying to determine how the defenses are being laid out.

Once the match starts, it becomes both a standard shooter and a game of siege and counter-siege.

"The Rainbow Six team is prepared to assault and the enemy can counter that assault with tools," said Xavier Marquis, creative director for the game. "We're really pushing the asymmetrical aspect of the game up to the point where each round is separated into two phases where there's a preparation phase for each side, attackers and defenders, that's why you see where the defense is deploying, what strategies those guys are using, where they're putting the objectives... and you select with your teammates the path you're going to take it's like a sandbox, so you can approach it from any side, so even the top floor. After that preparation phase you switch into the assault, so trying to execute your plan as much as possible. so we're big on having the asymmetrical aspect in the game.

"We are able to bring a lot of tactics to this mode. It's more real-time strategy instead of pre-set everything on the map."

The multiplayer will be based on a match system of six rounds where you're assaulting and defending three times each, he said. Each match is maybe 18 minutes that designed specifically to lessen the wait for those players quickly wiped out thanks to the no-respawn and one-shot-one-kill systems.

While some character classes may have body armor or shields, those who don't will be killed with a single shot. Once dead, there is no respawn. Instead the players can move around on the map controlling a small drone and providing intel to their still-living teammates. The drone, too, can be shot, he added.

"That really brings a lot of tension with it," Marquis said.

The decision to make the game's multiplayer so unforgiving, a throwback to the original Tom Clancy's Rainbow Six, was driven in part by survival games like DayZ and Rust, Marquis said.

He said he spent a lot of time watching DayZ on Twitch and that he was fascinated by the look of horror on a player's face when they died in the game, often losing all of their items. Players watching the stream would often seem just as horrified.

"The tension was very high, just because of the permadeath," he said. "It helps to tell a story."

But Marquis fell in love with the idea when the developers starting talking about the game's roots. 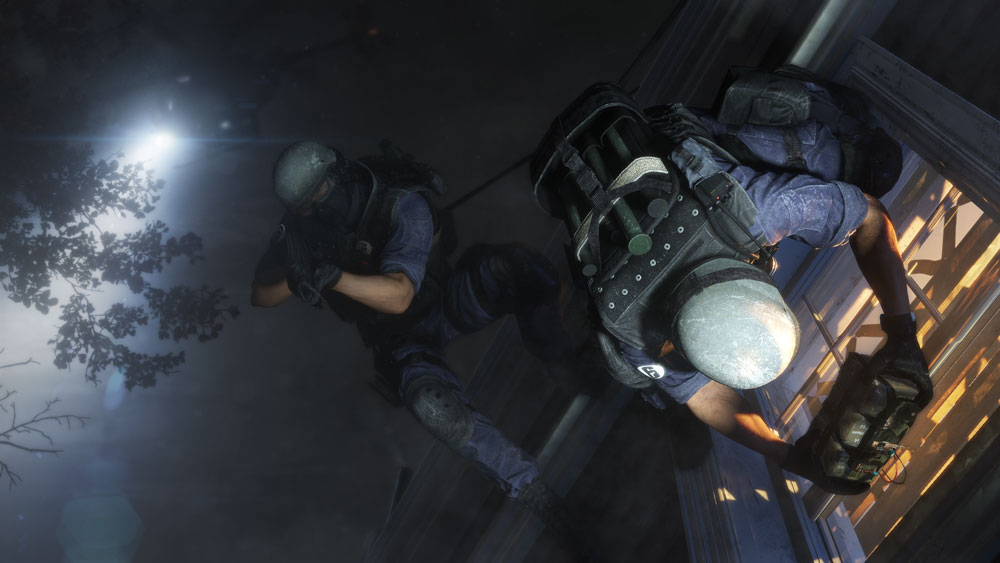 In the original Rainbow Six, released in 1998, was a punishing shooter that relied more on stealth and strategy then fast reaction and good aim. It was notoriously easy to die in the game. The game also features a prolonged pre-briefing that allowed players to plot out the movement of units on a map, something that won't be returning in Siege.

"We started with some different ideas, but the moment we said we wanted to try the one life [concept] on the prototype, that's when we started to see results in terms of tension and experience," he said. "Everyone was like, ‘Shit it's bringing so much to how you play,' that I knew it that was how we were going to make the game and the whole game is going to be one life."

The notion of having a single life also fits in neatly with the fiction of the game's universe. This is meant to be a military shooter starring a small, elite squad of soldiers. On top of that, the siege aspect of the game affords players more protection from bullets, cutting down on the chance of a death right after a match starts.

Marquis added that he thinks that the recent influx of hard-as-nails games, titles like DayZ, Rust, Dark Souls, 1001 Spikes and Spelunky shows that there is a growing base of players looking for new, more difficult challenges in the games they play.

So far, Marquis said, testers have been absolutely "insane" about the game and increased difficulty.

While today's unveil was meant to simply highlight the multiplayer nature of the newly revealed game, Marquis did mention that the game will also include both a cooperative mode and single-player campaign.

What can they tell us about the campaign?

"We can't tell you too much unfortunately about the campaign or about the co-op," he said. "We are focusing on multiplayer now. but we want to have the siege experience as much as possible, it's the central element of the game. "