Have you ever fantasized about an apocalypse happening? Where you can run about, having fun without the restrictions of society? Freeing you to do whatever you want, wear whatever you want and go wherever it takes you?

Insomniac Games' upcoming energy drink-fueled Xbox One shooter, Sunset Overdrive, aims to live up to that fantasy in a universe filled with a lip-pursing range of weapons and a punk rock-inspired range of in-game clothing.

We already know about the insanity that Insomniac wants to deliver with its single-player campaign, but earlier this week, the studio octupled the game’s candy-colored insanity with a multiplayer reveal. Online cooperative mode Chaos Squad allows up to eight friends and strangers to collectively drop into what the developer dubs the "rock and roll end times" or the "awesomepocalypse."

Sunset Overdrive's story focuses on an energy drink called OverCharge Delirium XT that turns its consumers into mutants, known in-game as the OverCharge Delirium Drinkers. And while going up against these mutants in single-player, players can choose to enter a Chaos Squad match anytime with their mates by entering a futuristic photo booth.

Once players enter a match, they find two mission types to vote on. They play five or six rounds then enter Night Defense, a wave-based tower defense-like final round. The full Chaos Squad sequence takes roughly 20-25 minutes. The demo we played at E3 was shortened to just the wave-based Night Defense round; we didn’t see any of the missions leading up to it.

In Night Defense, a Chaos meter, which accrues depending on which mission types players vote for and complete, dictates the difficulty of the final round. The higher the Chaos level, the harder the Night Defense, yet the greater the rewards at the end.

The basic idea of Night Defense is players must protect vats of OverCharge located in one of several forts from oncoming waves of soda-thirsty mutants. Not only can players hold off the enemies with weapons, traversal skills and crafted character abilities, but they can also strategically place traps before and during each wave. A variety of traps and special abilities can be unlocked throughout the game.

In practice, it was great fun grinding on rails above the mutants’ heads, zipping from building to building to take out the offending monsters destroying the barriers or vats. Quickly dropping down for a few moments to relocate a trap and then getting to higher ground before being overwhelmed by mutants felt cheeky. Seeing a trap mince up a large posse of OverCharge drinkers with its massive blades or a trap of sprawling landmines explode was always satisfying. 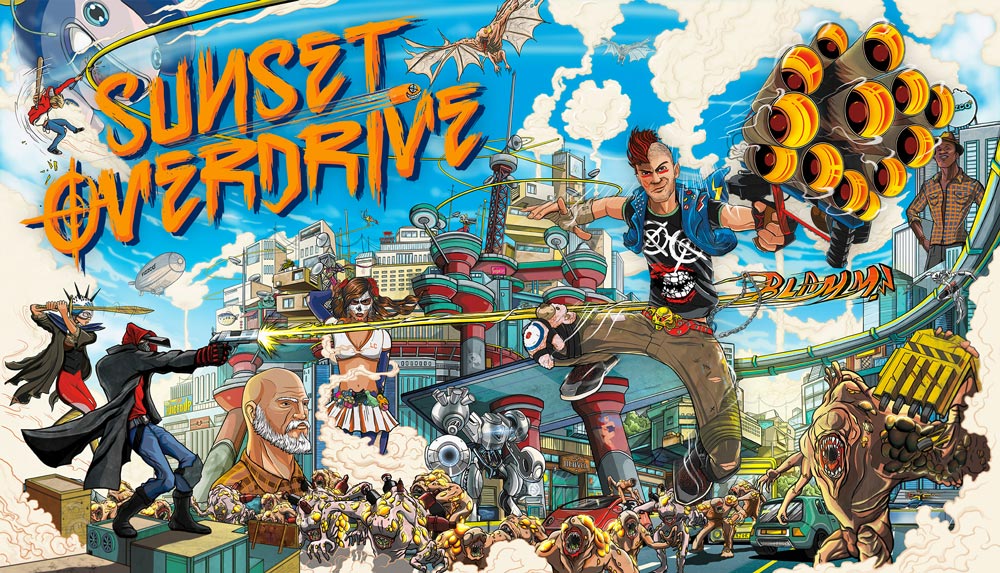 While Chaos Squad, which will run on dedicated Xbox servers, is the game's only multiplayer component, it offers different modes within it. And, according to Sunset Overdrive's Creative Director Marcus Smith, multiplayer won’t offer trolls much in the way of griefing.

"We don't have team kill on which helps a lot. Your allies aren't going to be killing you, which is good," Smith says.

But it's not only cooperative. "We also have independent scoring in the cooperative experience," Smith says. "And we are keeping track of who's the best, in the kills ... there is that competitive component to it."

"If you weren't doing well or are staying back, you are kind of wasting your time," says Game Director Drew Murray.

Murray explains that testing the game with player damage on and experimenting with free-for-all modes created an poor experience. "Those crazy weapons are really hard to balance in a PVP scenario. You always feel like that you're getting wrecked by something that is overpowered," he says.

The weapon arsenal in Sunset Overdrive outnumbers that of any Ratchet and Clank game. The deadly gear upgrades with use and players can also slot in upgrades — "amps" — to add extra oomph. "There are ones that definitely work better than others, like slotting a fire-based amp on a fire gun will do a whole lot more for you," Murray says.

As the player does tricks and gets kills, their style meter fills up, which can activate amps. These are used to customize a character’s abilities and are permanent once earned, but take some effort to get — you have you create an event and complete it to earn each.

"The cooler an amp is, the more challenging the event. If you want a great amp you have to get in and play hard in order to earn it," Murray says of the challenges. "There is a mode that we aren’t talking about yet that you have to play in order to craft them."

There are different types of amps that modify melee attacks, traversal, weapons and more. "These can be located by going out to find recipes to build components but there is a game mode that you have to play in order to actually construct them," Murray says.

Amps' existence in the game removes the restriction imposed by attribute-based clothing items, allowing the player to wear whatever they want. The clothing in Sunset Overdrive is free of attributes; they don’t offer any special skills or abilities, and are strictly vanity based. It was a hoot to watch my badass Tank Girl-like dressed character do aerial flips right before shooting a mutant between its pustule-ridden legs.

"We went back and forth on that for a long time," Murray says. "Marcus and I were super adamant that we wanted people to dress the way they wanted to. We wanted to sort of let their freak flag fly however they wanted to. We didn't want people to be like 'Well, I want to wear this, but I have to wear the cat in the hat because it gives me two plus dexterity or something.'"

"That’s why we have separated amps out. It’s something that doesn't have any physical appearance. It is something that you can slot in to make your character be what you want so you can wear whatever you want."

And all clothing and amps earned in the single-player campaign carry over to the multiplayer, offering players the chance to vainly flaunt their character customization skills and unique style to other players. All rewards and other perks earned during multiplayer also carry over into single-player.

Even from the small slice we got to play of Sunset Overdrive’s multiplayer component, it was easy to get a sense that there will be plenty of fun experiences created with friends within Insomniac's crazy world.