The newest version of Super Smash Bros. is all about gut and glory. New modes and an insane amount of customization promise to add unprecedented depth to the series.

There is something about Pikachu beating up Mario that has continued to be endearing for 15 years.

The next Super Smash Bros., slated to launch on Oct. 3 for Nintendo 3DS and this winter for Wii U, aims to capitalize on this nostalgia by preserving everything already addictive about the series and expanding on it with new modes and challenges. With a boggling number of character customization options — down to the abilities and strengths of each fighter have — never before have Super Smash Bros. players been so spoiled.

In the palm of your hand

There's novelty of being able to carry Nintendo’s famous brawler wherever you go, but the visual presentation of Super Smash Bros. on 3DS makes it feel a little bit like an afterthought. Naturally, the graphics aren’t as pretty as those in its Wii U counterpart, and players can toggle black outlines around the characters on and off, which makes the game feel a little more old school but doesn’t do much for visibility.

What the 3DS version does have going for it is Smash Run, a time trial mode inspired by the City Trial Mode from 2003 GameCube racing game Kirby Air Ride. The mode gives players an open environment packed with opponents to take down, and the goal is to defeat as many enemies as possible within a five-minute limit, blasting through different stages and taking on enemies pulled from Pokemon, Mario, Donkey Kong and Kid Icarus. Different power-ups — boots for hit strength, wings to extend air time, tiny boxing gloves and hammers, for example — appear throughout each level.

Smash Runs culminate in one last challenge: your typical four-on-four Super Smash battle. Players face off against three computer-chosen opponents under certain conditions. For example, it could be the standard game of knocking others off the stage as many times as possible within a time limit, or it could be a one-hit death match with all fighters beginning at 300 percent damage. This will change from Smash Run to Smash Run.

In our time with Smash Run mode, we found it to be a solidly satisfying single-player campaign addition to Smash Bros. We can see players who are trying to master characters, or just fiddle around with fighters they’re more unfamiliar with, using this mode as a testing ground. It’s a good way to get a handle on each fighter’s unique moveset and figure out what types of opponents — airborne ones, swordfighters or gun-toting long range specialists — they are strong against. 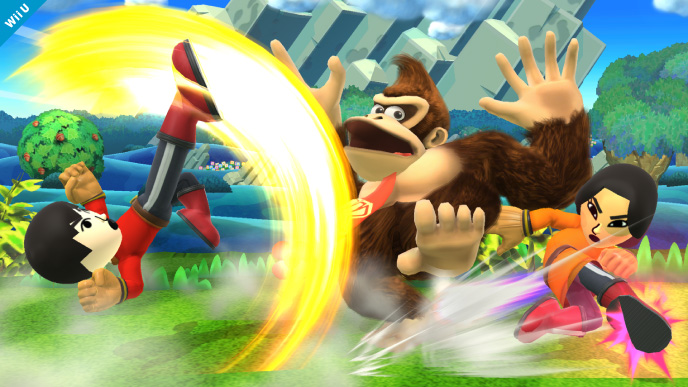 Playing Super Smash Bros. for Wii U feels like coming home. Menus are minimalistic and easy to interpret, controls are quick and responsive, and within minutes players are punching and kicking each other across the screen. The game’s online modes are even divided up in a way meant to keep that loving feeling: The For Glory and For Fun features draw the line between merciless competition and just whiling the time away making Link kick Kirby around. For Glory mode is all about going head to head to find the best fighter, while For Fun mode focuses on less aggressive elements, like leveling up or just killing time with friends.

Super Smash Bros. Wii U also looks good. Character models look crisp and clear, and ever-moving backgrounds with their myriad environments — an Animal Crossing town, various speeding planes in the Pilotwings Stage — are shiny enough to sometimes draw the eye away from the fighters. The game is still in quality assurance testing, with Game Director Masahiro Sakurai explaining during a recent presentation that it’s taking longer to debug than the 3DS version, but based on the lines to play both versions at Nintendo’s E3 booth this year, it looks like the Wii U version will be more popular with fans. 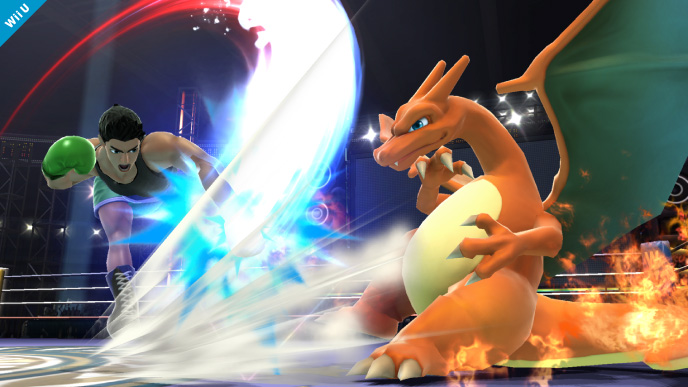 The new Super Smash Bros. features 33 characters, more if you count the addition of the Mii Fighter feature that allows players to import Miis into the game and assign them fighting styles. Of the default characters, eight are new: the Pokemon Greninja, boxer Little Mac from Punch Out!!, Rosalina and a Luma from Mario games, the Animal Crossing Villager, Lady Palutena from Kid Icarus, the Wii Fit Trainer, Capcom’s Mega Man and Bandai Namco’s Pac-Man.

All fighters are available in both versions of the game, including the Mii Fighters, and character stats can be carried between the 3DS and Wii U. Special movies and unique items acquired in one version can’t be used in the other unless they’ve been unlocked there. But Sakurai suggests going through the 3DS version’s Smash Run as a quick way to collect bonus items.

At E3 last year, Sakurai told Polygon that choosing which characters to include in the game has been stressful to the detriment of his own well being, "almost deadly in the amount of time it takes." It’s clear that thought and care has gone into this process, evidenced by the addition and function of nuanced characters like the Wii Fit Trainer and Lady Palutena, the latter mined from the sometimes glossed-over lore of the Kid Icarus universe.

In order to keep the playing field balanced, the recently announced Mii Fighters aren’t the only customizable fighters; players can customize all characters’ fighting styles by adjusting abilities and equipping special items. In past Super Smash Bros. games, each character has had four set attacks: a basic attack, an up button special attack, a down button special attack and a side special attack. In the 3DS and Wii U versions, players can choose from one standard and two variations for each directional attack. (For example, Mario’s standard Fireball side attack can be upgraded to a Fast Fireball or a Fire Orb.) This gives players 12 choices when assigning special attacks to characters.

Mii Fighters and Palutena, however, are different than standard characters. Their attacks are not derivatives of other attacks, but are all new special attacks. Players can also customize Mii Fighters’ clothing and hats.

Characters can also equip up to three items, like high-power gloves that raise attack power but make you easier to launch, and lightweight shoes that make you faster but reduce your attack power. Each special items adds a new strength and weakness, another way Sakurai has sought to make sure characters stay balanced and fair. And the heavier the character, the more items you can carry.

However, in order to maintain game balance, Sakurai says fighter customization for both Mii Fighters and regular characters will only be available in In Friends Mode, which only lets players who have swapped personal information play together. This, he says, will minimize griefing and negative feelings that tend to be inspired by repeatedly failing matches. 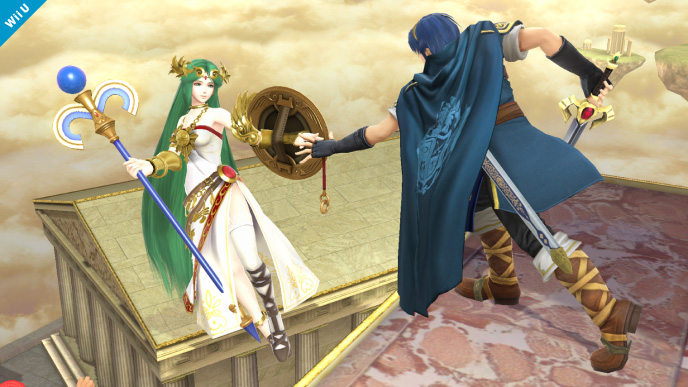 The new Super Smash Bros. will also make use of Nintendo’s recently-announced Amiibo figurines, the company’s answer to Skylanders and Disney Infinity. These characters carry chips within them that, when placed on the GamePad select screen, summon the character into battle as an "FP," a Figure Player. So far, announced Figure Players include Mario, Peach, Yoshi, Kong Kong, Kirby, Pikachu, the Animal Crossing Villager, Wii Fit Trainer, Samus and Link.

Figure Players cannot be controlled like regular players and will level up each time they are used. The more they are used in battle, the stronger they become physically. These Figure Players can exceed the strength of a level nine Computer Player — a very, very high bar — and can be raised as high as level 50. Sakurai said that this won’t be as much of a time sink as it sounds, and leveling them up with be a fairly quick process.

These figures also function like A.I. and will change their fighting styles over time based on their opponents. Figure Player characters will eventually learn that guarding opponents don’t move, and how to launch them in the air more efficiently. These "smart" figures will gradually alter their attack, defense and speed through gameplay as well as through equipping special items.

Sakurai says these figures, which are the first Smash Bros.-related merchandise ever sold, will come to be thought of as players’ partners.

The new Super Smash Bros. is breaking new ground in terms of combat depth, which will undoubtedly contribute to what looks like a long shelf life of play. With an audience hungry for a new game, and a smattering of new and returning characters that have already captured the imaginations of eager fans — as well as a surge in publicity in the eSports community, if the recent E3 tournament is anything to go by — Super Smash Bros. for Wii U and 3DS is shaping up to be one of the definitive fighting games of our console generation.