Four and a half years ago on a cold, dim February morning in the suburbs of Chicago my daughter was born. After a long night she was finally there with us — tired, bright pink and utterly helpless. When I met her for the first time, as I held her in my arms next to my dozing wife, I knew that I would do anything to keep her safe.

I began to live my life a little differently since that day.

I save more money now. I buy healthier food. I take care to keep up with the maintenance on my car. And at home, inside the crawl space under the stairwell, I keep some canned goods and fresh water. Just in case.

When The Division unveiled its new CGI trailer during the Microsoft press conference at this year’s E3 a chill ran over me. It showed a home not unlike my own, a sick child that could have been my daughter, and a family trapped in a disaster with no hope of rescue.

It showed, quite literally, my worst nightmare.

And just as I was being sickened by the thought of such a tragedy, as I began to imagine everything I held dear crumbling around me, The Division gave me hope. There was someone there to take my hand.

The Division is an open-world game set in the Tom Clancy universe being developed by Sweden’s Massive Entertainment and published by Ubisoft. It takes place in a near future New York City in the middle of an uncontrollable viral outbreak.

On Black Friday, the busiest shopping day of the year, a virus breaks out. It spreads quickly among the many shoppers packed into the city’s stores and on public transportation. Just weeks later the city is in chaos. Civil services, like electricity and gas, have been shut off. Police are largely powerless to stop the thugs who roam the streets, looting and killing at will. People begin to barricade themselves inside their homes, struggling with sickness and hunger.

What makes this new Tom Clancy game so compelling for Massive’s intellectual property developer Martin Hultberg is that it could so easily happen in the real world. That’s why he keeps a stockpile of food, water and medical supplies in his own home in the Swedish countryside. Just in case.

“I might be considered a prepper,” Hultberg says. “[I have] two, three, four weeks of supplies at home, which I think is very common in the US. You have a lot of natural disasters; tornadoes and floods and forest fires and whatever. And there’s also the threat … [of] pandemics.”

Hultberg says that Ubisoft gave his team at Massive a mandate to make an online, multiplayer Tom Clancy game. The only stipulation was that it couldn’t rely on any existing Clancy properties. Without the Ghosts to do recon, without Rainbow to kick in the door, his team at Massive had to invent its own heroes.

In their research they came upon a presidential directive, number 51, signed into law by President George W. Bush. It was the end result of a series of war games, which began in 2001 at Johns Hopkins University, and were designed to simulate a biological attack on the United States. Directive 51 is a real life continuity of government plan, designed to allow the sitting President to take control of the country and override the authority of the Senate, of Congress and of the Supreme Court.

In order to ensure the survival of the United States during a biological attack, directive 51 gives the President sole authority over the country, effectively turning him into a dictator.

The team at Massive tried to imagine what the top-secret pages of directive 51 might look like, and in so doing dreamed up the agents of The Strategic Homeland Defense Division.

“It’s a [fictional] civilian agency,” Hultberg says. “It consists of people living out there in society — regular society — that are enlisted into this organization. They have their normal jobs. They do their normal thing. And when the disaster happens they are activated.”

When The Division is released in 2015 players will step into the role of these Agents. They will play the role of a highly skilled paramilitary force with far-reaching Presidential authority to do what needs to be done to take back New York.

“They could be doctors, policeman, soldiers,” Hultberg says. “They could be pretty much anyone with a skill set that is useful in this situation. They are decentralized and they are independent, they operate by themselves.”

That is to say, the Agents of The Division will operate very much like terrorist sleeper cells, with the President of the United States as their supreme leader.

The Division was supposed to be on store shelves this year. Even after it was delayed to 2015, I expected it to be playable in some form at this year’s E3. But that wasn’t the case. All that was shown during this year’s convention was a guided demonstration.

In the demos, a team of four players — three playing as Agents on the ground and one operating a flying drone — assaulted other armed groups throughout New York. The gunplay in this third-person shooter was close range and brutal. Each Agent was armed with a sidearm, two long guns and a host of high-tech gadgets.

The gadgets were representative of the various skills each Agent had trained in as they leveled up. Among them was a turret, capable of spitting both lead and flames. Another was an autonomous flying drone that dazed enemies with a dazzle of strobing lights. Yet another was a homing grenade, able to harass large crowds of enemies or single one out with devastating results.

Throughout the game footage every player made use of Echo, a wearable computer, capable of skimming electronic intelligence and recreating scenes throughout the city in haunting 3D. It could also be used to display a map of the city, showing areas that the Agents had taken control, give information on how services and order were being restored there, and show the movement of their allies in real time.

What struck me was the sense of place shown throughout the demos. Christmas decorations still hung from the trees, garbage lay piled outside barricaded apartments and hastily scrawled banners hung from fire escapes. This wasn’t just a simulated city, it was a city that had been through hell.

But this is all information and game features that Ubisoft has hinted at since the game’s unveiling in 2013. What was new to the show this year was the unveiling of the first of The Division's enemy factions, called The Cleaners.

BURN IT WITH FIRE

“The Cleaners have a fairly unique agenda,” Hultberg said, and from what I saw that’s putting it lightly.

Where The Division is dedicated to saving people, to healing them, The Cleaners would rather burn them alive. Anyone who has been exposed to the deadly contagion is marked for death, including The Division. Wearing tattered fireman’s jackets and full face respirators, the enemies shown in a closed door demo were heavily armored and waving flamethrowers over piles of charred bodies.

“When you compare them to many of the other factions we have developed,” Hultberg said, “what they are trying to do is [use] their tools, their means to fight the virus their own way. But the way they’re fighting it is actually detrimental to what The Division is all about. 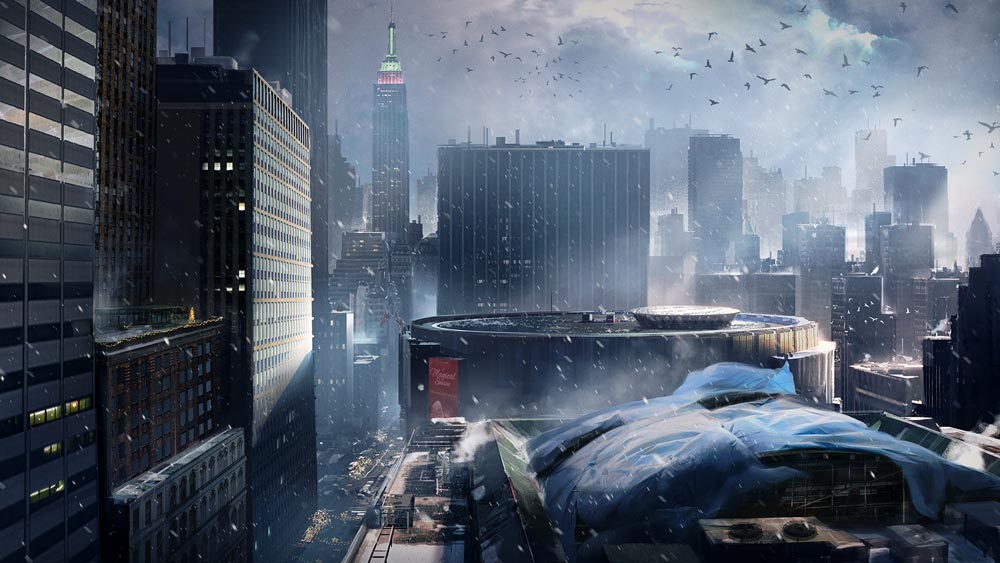 BOOTS ON THE GROUND

This year’s CGI trailer showed us that The Division has heart, but the soul of the experience will be in the gameplay. And without laying hands on a game controller myself, I remain skeptical.

In the demonstrations I was shown, I was surprised just how much of an RPG The Division is. The way that skills are developed and expanded over time shows the dedication the team at Massive has for empowering their players. But seeing numbers fly over enemies as they were wounded looked cluttered and distracting.

While the gunplay was fierce, loud and chaotic, it looked very much like the kind of cover-shooting mechanics players experienced in the Mass Effect games. Fights quickly devolved into stalemates, and often the best solution was to pop up out of cover, fire off a quick volley, and pop back down again and again. While the skills and gadgets were promising, I was surprised to see very little evidence of any melee combat whatsoever.

The tablet experience on display seemed underdeveloped. During one demo a Ubisoft employee sat in the corner of the room, proving to the audience that he was in control of the craft we could see on the main screen. He was able to fly left or right, forward and back using the swipe of a single finger. He could also turn his drone using multitouch gestures. But there was no altitude adjustment, and the only effect he had on the gunfights raging below was by marking targets or flushing enemies out of cover with teargas. I wonder how much fun the tablet experience will be to play for any length of time.

But the emotions of the game, as distilled in the gripping CGI trailer, give me hope. If Hultberg and his team at Massive can continue to pull at player’s heartstrings for the duration this game could be very special. And if they can elevate their Agents above the common, trigger-pulling goons we’re given in other games they will give fans of the Tom Clancy universe an impressive gift indeed.