Survival horror pioneer Shinji Mikami returns to the genre he made famous with The Evil Within, a terrifying adventure dripping with blood, guts and ghosts.

The Evil Within mixes survival horror with psychological terror, then steeps it in gore

But The Evil Within goes to more extreme lengths, particularly in its depictions of violence, torture and gore, and taps into psychological, hallucination-driven scares that would feel out of place in a Resident Evil game.

The Evil Within is not for the squeamish. Its hero, detective Sebastian Castellanos, is forced to wade in chest-high pools of thick blood and viscera in one stage. He solves puzzles that require poking and prodding the brain tissue of mental patients that, despite being little more than a head and neck, are somehow still conscious.

The game's rank and file undead, if that's what they are, go beyond just decaying, shambling corpses. They've clearly been abused, with nails, spikes and stakes driven through their faces. Their lower jaws have been cleaved off. They're wrapped in barbed wire. They seem angry at — not just hungry for — your living human flesh.

In one of the game's chapters we played during a recent demo of The Evil Within, we got to explore its more traditionally creepier side. Castellanos approached a hospice facility, in search of the missing patient of our sidekick, a Dr. Jimenez. The exterior of the dilapidated building was monitored by a handful of undead milling about a stack of burning corpses. As Castellanos and Jimenez, we carefully avoided making our presence known. Once inside, we got our first taste of The Evil Within's gore: We were tasked with carving up a rotting cadaver in order to extract a key from its torso.

Venturing into the rotting interiors of the surrounding buildings felt like exploring familiar territory. It was essentially a darker, grislier spin on what we've seen while creeping through the mansions of Resident Evil.

Castellanos has a small arsenal of weapons at his disposal: a police issue revolver, a shotgun, a knife and occasionally a grenade. Ammo, as expected, is limited. His most unusual weapon is the Agony Crossbow, a "last resort" projectile weapon that fires bolts that can freeze, explode, blind or electrocute enemies. During Castellanos' adventure, he'll harvest mechanical bits that can be used to craft those bolts.

Some of those bolt parts can be gathered from bombs that are scattered throughout The Evil Within's levels. These traps detect your proximity and movement, but can be disarmed through a mini-game that's simple, but extremely risky. Oftentimes, those bombs are obstructed from view by items in the world, and I frequently found myself caught by surprise by the beeping sound of their imminent explosion ... and then in their blast radius. I found it better to avoid those annoying bomb traps rather than attempt to disarm them. 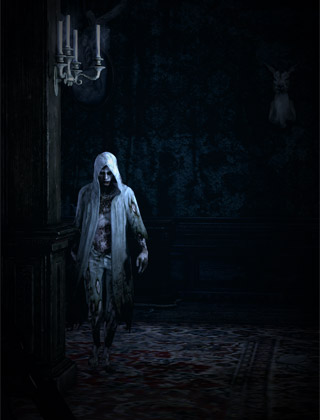 While jump scares — like those unwelcome bomb surprises — abound in The Evil Within, its terrifying collection of monsters and ghosts are responsible for the game's more interesting frights. In the hospice chapter, we had our first encounter with the game's bloody spider lady, a multi-limbed, black haired female creature that spawns forth from a pool of blood. Not only is she virtually indestructible, she has the power to teleport. At the advice of a Bethesda Softworks staffer, we simply ran away from her.

Unfortunately, at the end of our mad sprint, we ran into another of the game's unkillable enemies, the phantom known as Ruvik. He's a prowling ghost (or some manner of hallucination) and seemingly responsible for bringing the dead back to life. Ruvik quickly boxes you in between himself and the spider lady and your only means of escape is falling down a dark shaft.

Your fall quickly goes sideways, quite literally, as The Evil Within toys with the very layout of its levels. This happens multiple times in the game's early chapters, with hallways and tunnels changing shape and orientation before your eyes. Ruvik, it seems, is at the heart of these hallucinations, as the game's characters all experiences those strange visions. "We must be collectively losing our minds," one says.

A later section of the game, the game's eighth chapter, "The Cruelest Intentions," opens outside an imposing mansion, the type clearly owned by some eccentric, perhaps murderous family. "I've seen this house before," Castellanos says as he approaches it, "I've never been here, but ..."

The Ruvik visions appear to grow more intense here, as Castellanos sees ghostly echoes of events that occurred at the mansion years before. Ruvik occasionally appears in a burst of blue light to terrorize the player, while undead actively hunt Castellanos down.

Castellanos' primary goal here is to solve the puzzle that keeps an ornate foyer door locked down. He soon discovers that those puzzle pieces are tied to disturbing medical experiments being performed at the mansion. Its inhabitant has an obsession with the human brain, it's revealed, and has a handful of still-conscious cadavers scattered about the house. Unlocking the trio of locks that block Castellanos' way requires visiting three of those disembodied heads and drilling into a specific region of the brain responsible for a certain human emotion. Doing so unleashes a stream of blood that circulates back to the main door, and also makes Castellanos feel complicit in some cruel scientific experiment.

While that section of The Evil Within was enjoyable for its twisted take on a locked door puzzle, the game's eighth chapter offers a good slice of what Tango Gameworks has planned for its mix of body horror and psychological terror. The phantom Ruvik makes a handful of appearances in between encounters with the undead, twisting the environment and ensuring that even when the mansion is cleared of reanimated enemies, players will never feel safe.

The Evil Within pulls another smart trick when it comes to its undead. Even if undead are defeated — downed or decapitated with a headshot — you're never quite sure if they're really, truly dead. Properly finishing them off requires setting the undead on fire, which Castellanos can do by dropping a lit match on them (or in some locations, by igniting a puddle of oil). Matches, it seems, are in rather short supply, and for some reason, Castellanos can only carry eight or so at a time. It's an arbitrary, implausible restriction, but it's effective nonetheless.

Hallucinations in The Evil Within are used as more than just a storytelling device and a means to disorient players, we learned in the game's eighth chapter. Castellanos will also suffer hallucinogenic effects when he uses certain healing items, making even the act of restoring one's health potentially dangerous. While can use a simple healing serum delivered by syringe with no side effects, if Castellanos uses one of the game's restorative medical kits, he'll suffer dizzying visions that last for a few seconds. 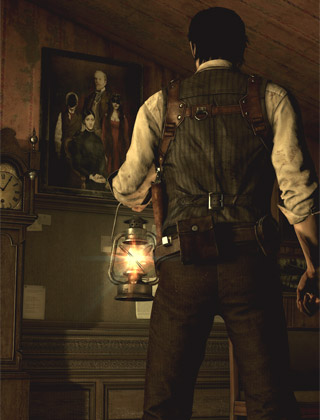 How that works, it appears we'll have to wait until after E3 2014 to find out.

The Evil Within has an immediate charm to it. It has certain touches that feel slightly quirky, but somehow comforting; Debussy's "Clair de Lune" plays in the game's save rooms, for example. And Castellanos often says things that feel contextually just a bit off. "Something is seriously wrong with this place," he casually says out loud after encountering a dozen or so undead and gore-caked walls.

It feels like a game that builds upon what Mikami is best known for — survival horror — while taking the genre into a new direction, one without the restrictions a legacy franchise like Resident Evil carries with it.