Victorian London becomes the setting for a cover-shooter involving Knights of the Round Table, steampunk weapons and class warfare.

The Order: 1886 is a cover-shooter with grand aspirations

The main character in The Order: 1886 is a white male, mid-30s, facial hair, gruff voice. He shoots people.

He wields meaty Victorian alternate-technology steampunk weapons. The game is set in shanty 19th-century London (specifically, Whitechapel), which, as we all know, was generally shaded bluey-gray.

This version of London is an alternative in the sense that it never really existed. But it is simultaneously not an alternative, in the sense that TV and movies are crammed with an infinity of 19th-century Londons featuring dashing, violent chaps wielding unlikely firearms against netherworld monstrosities. One such apparitioned onto my telly the other day, starring a cowboy and '80s James Bond. Alternative late-19th-century London is a jolly bowler hatful of tricks.

Isabeau is Galahad's female sidekick. She carries a large weapon and is, according to developer Ready at Dawn, a "badass."

At a recent pre-E3 media event, during which the game's release was announced as delayed from late this year to early 2015, I was given an opportunity to play a short (very, very short) section of The Order and I will say from the out that it was fun, in a Gears of War, strangulated options sort of way.

Galahad and Isabeau and some other fellows are holed up in splintered Dickensian squalor. Assailants are shooting at them from multiple directions, as the heroes attempt to exit a building. Galahad is trying to save the life of an injured copper, so we know he is both a nice guy and on the side of law and order.

There are a small number of standing pillars that I am given to use as cover. My allies do likewise, popping out from time to time to fire at the enemy and contribute to various flashes of standard shoot-out dialog.

My gun is terrific. It shoots multiple projectiles, which bury themselves in the woodwork around my targets. They do not seem to do much harm, until I augment them with a fireball, which lights up the projectiles. My enemies die horribly, soon to be replaced by new waves of roof-crawling baddies. We escape, move onto a new set of barricades and get down to some urgent exposition.

I play the scene again. This time I try different approaches to killing the enemies, but they all wind up with me being slain. So, stay behind immediately available cover, shoot, advance. Got it.

It's not terribly original, and the weapon's vast power is a cause for concern, but it is enjoyable. Why? Because it's tightly rendered and convincingly paced. Also, I like Galahad. He may seem like yet another nerd culture heroic archetype, but he displays an old-fashioned, sweaty, hairy Victorian masculinity that I find stirring. The tiny snatches of dialog that he speaks lead me to hope that he may even be that rare thing: a genuinely likeable central game character.

"We'll see him in a lot of different lights," said game director Dana Jan. "We'll see him snap, we'll see him upset. He's a character who is very multifaceted emotionally and doesn't have too much of a simple, singular exterior."

Jan said that the game is "trying to give value to life, to show emotion rather than combat all the time." This may be overstating the case somewhat, based on those flaming bad guys I torched, screeching their last tortured breath. But, like other violent games, such as Ryse: Son of Rome, it looks like noble effort has gone into the detail and drama of characters' faces, which itself acts as a cover for the raging mayhem these games are designed to deliver.

Preying on the Poor 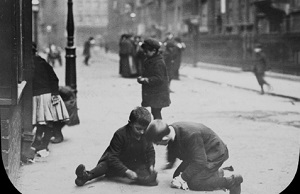 Leaving aside the supernatural stuff, I find the setting of 1886 interesting, personally. My great-grandfather was born in Whitechapel’s poor house in 1870 (my mum is an Ancestry.com nut). He spent his life unheroically maintaining the British Empire from a cushy barracks posting in Malta, getting into minor scrapes with his superiors.

He lived during a time of great injustice and upheaval that saw the stirrings of the social revolutions that were to follow. Ready at Dawn says the game will address some of those schisms.

"The struggling and the poor, they resent the Knights because they think they are really there to protect the aristocracy, the rich, the status quo," said Jan. "The rebels themselves have to deal with the half-breeds [monsters] because they're being preyed upon. We talk about there being diversions in human society. We ask, who would they feed on? Well, probably those who don't have anybody to look out for them."

Next-gen consoles, powerful PCs and advances in facial capturing technology have all allowed game-makers to bestow greater emotion on their characters, even when they are, essentially, killers. But it still takes skill to achieve the desired effect.

"When you see it done well you take it for granted, and when you try to do it yourself, you realize it's really very challenging," said Jan, who previously worked as a level designer at Blizzard. "You have to get designers and programmers to think about that because when it's not right, we're all very good at picking up on that at a subconscious level."

Despite my game section's lunar palette, it looks impressive, especially considering that Ready at Dawn's previous work has been mainly limited to PSP games, ports and remake collections. Still, the franchises that have passed through its doors include smart-looking efforts like Okami and God of War. The developer is also being supported by SCE Santa Monica, which has an impressive track record of collaborating with emotionally charged and pretty Sony-related projects like Journey and The Unfinished Swan.

"This particular demo is very gray," explained Jan. "We picked an overcast day. We wanted to have an atmosphere that suggested gloominess. This area is one of the more heightened war zone areas in London at the time, and we really wanted to feel the heaviness of the world. So we said, let's make it look a little bit more muted, let's get a little bit grittier, a little dirtier, and a little darker time of day.

"There are things that actually introduce a wealth of colors. So we have a full gamut of that, which I think also will be refreshing that you don't feel stuck in one look that might be restrictive."

In the game's story, Galahad and other members of The Order, including a fresh-faced French apprentice, a mentor and Isabeau, are locked in an age-old battle against human-beast creatures. At the same time, Industrial Revolution-era inventions are threatening to collapse a social order that The Order relies upon to maintain parity with its supernatural enemies. This creates a three-way fight between the aristocrats (The Order's historical allies), working poor and abominations.

"History is so interesting, in terms of why things are the way they are now and how things came to be, and the influences that really small things can have in terms of the future," said Jan. "This particular time period is so opportune for us because a lot of technologies are emerging. Tesla was said to have been dabbling in wireless technologies for communication, so there's a lot of things that we can pull from.

"People can do research after playing the game and see that we tapped into something that was kind of true and could have been reality. That starts a lot of discussions, it makes you think. As developers, we often struggle to really paint a vivid, realistic, believable backstory for things. So for us, to go in there and take what's available and just choose what we want to keep and what we want to throw away and what we really want to change and make you freaked out about, I think that's where it gets interesting."

The Order: 1886 looks like it's going for the PlayStation next-gen high-concept cover-based third-person shooter crown. It's one of those early-generation new IP attempts that aspires to franchise status. Jan says it's also about moving cover mechanics forward, creating shooting spaces that feel hostile, claustrophobic and, most importantly, fresh. Part of that is about realistic perspective and tight control over movement.

"We pulled the camera really close," he said. "You can still see over the cover somewhat, but you don't have free aim. You can look up over the cover or look around cover without sticking out too far. The enemies can't hit you very well when you do that. We also give you a lot of abilities to move around quickly in and out of cover.

"You can quickly detach, reattach, move, transfer to other objects very fluidly. All of the stuff we worked on was refinements to making it not feel very old school, where you'd press a button, and stuff would happen. We let you inch off and come back without doing anything more than just manipulating the analog sticks. I don't think we've revolutionized cover, we've taken things about cover and purposed them for our use specifically and then also massaged them to make them new."