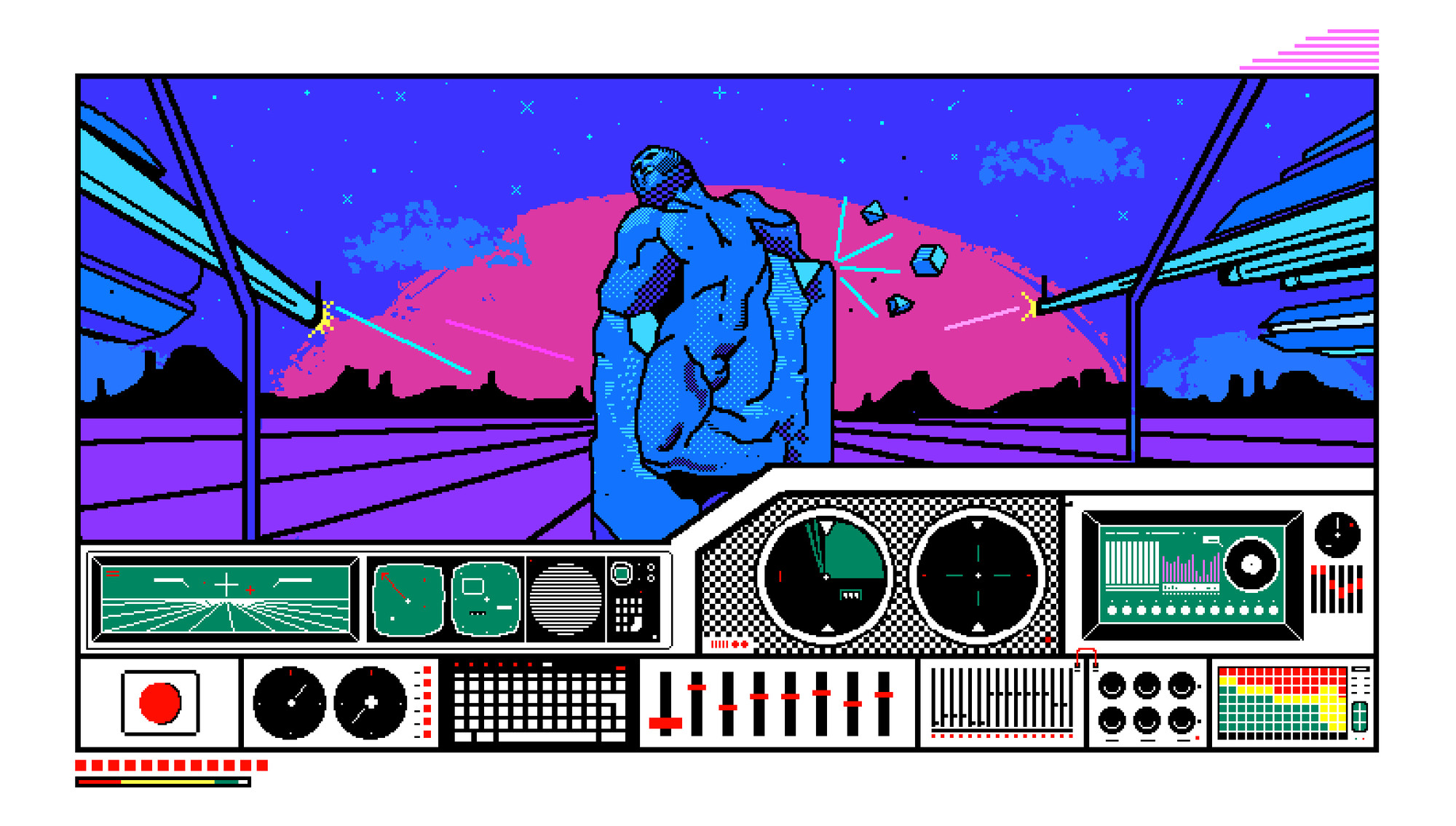 THE DREAM OF DEVELOPERS AS ARTISTS

Ray Kassar, Atari’s chief during its golden era, once compared game developers to workers on an assembly line. When Atari programmers demanded higher compensation for their work, Kassar, who came from the textile industry, said game makers were less like artists and more like people who design patterns on towels.

Hawkins, who had made games, held a contrary opinion. He believed a company that attracted the best game developers would publish the best games.

His interest was not in the console business, which he saw as oversaturated. Hawkins’ decision to stay clear of publishing on the Atari 2600 kept the company safe from the market’s collapse in 1983 and 1984. He was interested in personal computers, which were experiencing a massive boom in the early 1980s.

Many game developers were selling their games through mail order via magazine advertisements. Computer and software distributors sometimes carried games and sold them through mom-and-pop stores, but games were not treated seriously and were generally seen as far less profitable than productivity and educational software.

Nobody ever really talked about games or software development the way I was talking about it. I was using terms like ‘software artists.’

“I had this idea of the software artist,” says Hawkins. “I studied all of the business practices of all of the media industries: Hollywood, publishing and so on. I tried to just copy and steal everything that they were doing and to apply it to what we were doing.

“Nobody ever really talked about games or software development the way I was talking about it. I was using terms like ‘software artists.’”

Today, Hawkins talks about the original vision in terms of its application in practical terms, how it impacted on negotiating with artists, the way packaging was presented, how the company was represented to the media.

The first office was based near the San Francisco airport, because Hawkins believed that the company would be spending a lot of time playing host to visiting talent.

“I knew Trip at Apple in 1980, when he was product manager on the Lisa [an unsuccessful precursor to the Macintosh]. He was always a gamer, even though he seemed like this very slick marketing guy who wore a suit and was impeccably dressed.”

Budge originally self-published his game, not really seeing the advantage of a publisher. But as the game’s success grew, he started talking to two established companies: Brøderbund and Hawkins’ EA.

Budge had been making money by selling his games directly to small stores, but as the retail network became more sophisticated, retailers turned to distributors who worked on tight margins and refused to do business with single-product vendors. 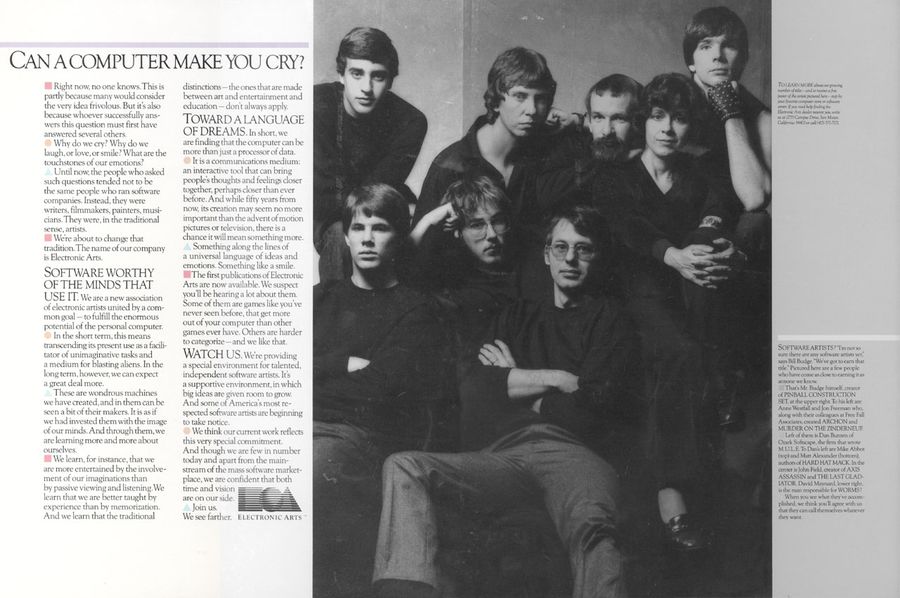 “The business was really changing,” he says. “It became clear that you needed to be a bigger company. Marketing and distribution were becoming really important. I wasn’t going to do that.”

EA wasn’t the only publisher operating in games. “Brøderbund was very informal. Ziploc bags, that model,” he recalls. “Electronic Arts was Trip’s vision. He said that software was going to be like records or any other media. We could up the level of packaging, of marketing and distribution. They even had a PR agency.”

Hawkins offered developers equity in the company if they signed, with bigger bonuses to come if they created more games for EA.

“Electronic Arts was really pushing hard and, in the end, I said yes to them.”

EA’s executive team believed that it was at the beginning of a process in which computer games would coalesce from a state of chaos to one that resembled the record business. They saw it as a business, but they were also believers. To EA, games would replace TV and movies as the entertainment medium of the future.

“Trip had a missionary zeal about games as a social movement,” says Gordon. “The vision was that one day, games would be a standard form of media as big as movies and music. And, furthermore, that interactive was better than passive because it got you engaged and it fired up more of the brain.

“We imagined that one day, half of all people would play games every month, people of all ages. We saw games as an art form.”

EA is known today for its vast studio network, but it was originally formed to service independent producers. Based on what Hawkins learned at Apple, he felt that external creators could bring more value than settled, internal teams. 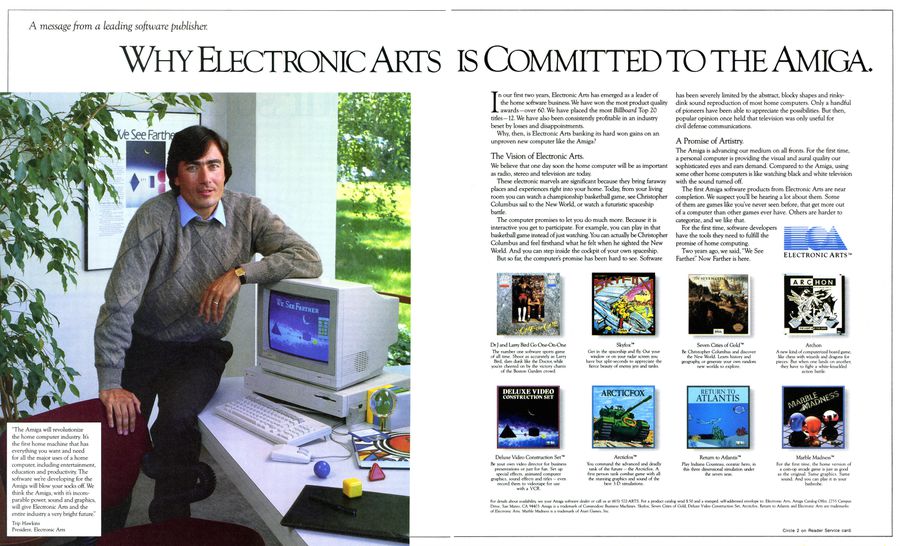 “Trip came away [from Apple] with his insight that employees don’t create the most innovative software; independents do,” says Gordon. “He saw that home computers were going to become powerful enough to play games and that an independent software artist could make the best stuff.”

In Hawkins’ view, the publisher was not merely a one-stop shop for sales and marketing, but also a facilitator of development. At a time when games were almost always made by individuals or very small teams, he believed that expensive tools and development kits provided by publishers could add value to the creative process. This all came from his observations of the music industry.

“The studios had all this great equipment, soundproof rooms and support that enabled the creative work to be done,” Hawkins says. “Back in 1982, most of the developers were doing the development on their Apple IIs. There really wasn’t much of anything in the way of good tools.

“So we said we’re going to elevate it to bigger, beefier PCs with a whole lot more memory and much more processing speed. We’re going to have compilers and assemblers and art tools.

“We really got that process started, and it’s remained important ever since. It’s turned into its own industry. It was a key thing to enable the developers to leverage their work, including being able to get it across more platforms.”

Hawkins’ big mission was attractive to people who believed in creativity. EA was like the Argo from Greek mythology, with Hawkins acting as its Jason.

At the time, Bonn was a computer science grad from Berkeley who worked at IBM and spent his spare time coding a computer game. When he heard about EA, he begged to join the company.

Trip had a missionary zeal about games as a social movement. The vision was that one day, games would be a standard form of media as big as movies and music.

“As soon as I heard what they were doing, I thought, wow, this is big,” he says. “They were thinking about it in precisely the right way, which was talent-centric. All media, all great media, is created by a collaboration of talented people. The difference between a great movie and a shitty movie is talent. A good book and a shitty book. It’s all about talent.”

Early employees at EA included talent like Don Daglow, Richard Hilleman, David Gardner, Joe Ybarra and Nancy Fong, all of whom would have a profound impact on the company or on gaming in a wider sense.

EA’s initial roster of releases shows that Hawkins was able to attract talent and to spot good work. As well as Budge’s Pinball Construction Set, the company launched M.U.L.E. and Archon: The Light and the Dark, both of which are still regarded as classics of the era.

There were also a couple of decent action platformers called Hard Hat Mack and Murder on the Zinderneuf, innovative adventures by such developers as Paul Reiche, who went on to co-create the Skylanders phenomenon.

In the very early days, Hawkins registered his start-up as Amazin’ Software. But it was generally agreed to be a weak moniker. The name of the company needed to convey the organization’s interest in creativity and independence. A PR agency came in to brainstorm a better name, along with Bing Gordon and other execs.

“Nobody was thinking of games or software as art,” says Gordon. “If you could name the company as the category, we would have massive power.”

It was agreed that Electronic Arts conveyed the right message.