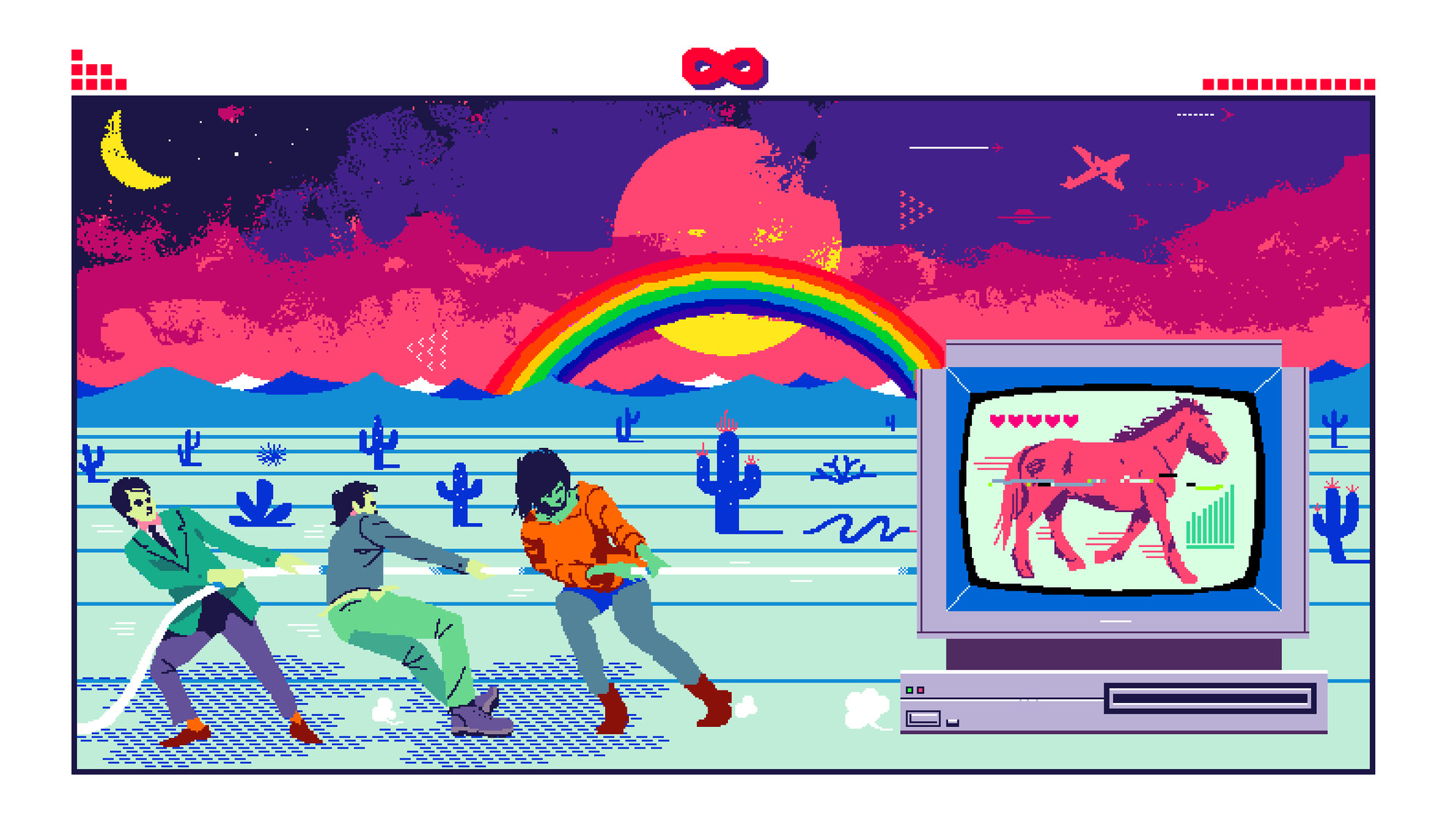 A TUG-OF-WAR WITH DEVELOPERS

Every now and again, team members at EA would hang out and play a game of basketball. The boss would show up to play.

“He was always a hard charger,” recalls Peterson. “He’d try to charge the basket and I’d just stand there. He bounced off. Then he came back. I don’t know if he really knew how to judge his battles.”

Peterson recalls company retreats during which Hawkins would become extremely animated about tug-of-war.

Hawkins always loved sports and was obsessed with the idea of simulating sports. He’d been playing with the idea of football and baseball simulations since he was a precocious kid. Sports games were always going to be part of the EA story.

Through 1983, he worked with a programmer named Eric Hammond to design a basketball action game. He brought in sports stars Julius Erving and Larry Bird to consult on the game’s design.

Dr. J and Larry Bird Go One on One was a good-looking mid-’80s sports game, nicely animated and offering defensive and offensive strategies. It sought to capture the magic of basketball and, within the limits of platforms like the Commodore 64, it succeeded.

This wasn’t just made by some engineers somewhere. This was about a collaboration with the players, the statistics and the rulebook for the sport.

C64 sales were booming and, with Atari in post-ET disarray, it looked like Hawkins’ belief in open computer platforms was paying off. One on One was a massive hit, pulling EA through its financial troubles, putting the company on the map with retailers and garnering positive press reviews in the burgeoning specialist press.

More importantly, it gave Hawkins an insight into the importance of involving real sports personalities in the development of games — and not just licensing their names and images.

“This wasn’t just made by some engineers somewhere,” he says. “This was about a collaboration with the players, the statistics and the rulebook for the sport. These experts, whether coaches or athletes, were working with us to do this in an authentic way. That really mattered to me.”

EA’s next few games included Boulder Dash, The Seven Cities of Gold and Music Construction Set. The company began to distribute games from other companies, including Lucasfilm Games, SSI and Interplay. More hits followed in 1985: Deluxe Paint and The Bard’s Tale.

A lot of developers were pulled in by EA’s way of doing business. They were attracted by the development tools, the inroads to retail, the sexy marketing, the nice packaging and, of course, the schmooze.

EA found that it was good at publishing video games because it had a better offering than its competitors, or than independence, which was increasingly becoming a non-option.

But this was a learning process. EA was still coming to grips with its relationships with developers.

Hawkins had dabbled with coding, but he wasn’t a developer. Gordon was attracted to creative people, but it took him a while to really get that their mindset was different from the writers and musicians who he assumed were their natural kin.

“Bing took me on about a 12-city tour,” he says. “We went to a bunch of stores and malls. Nobody would ever show up. 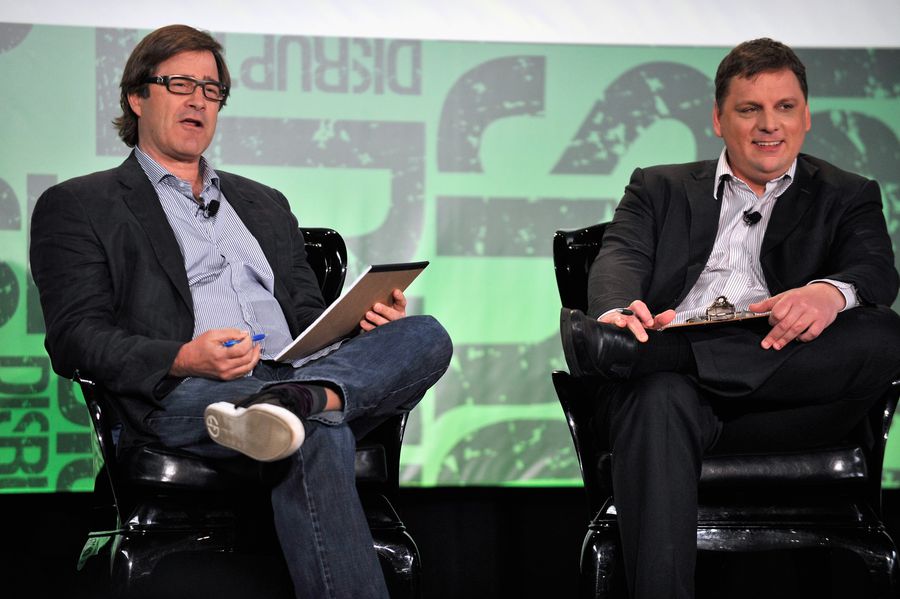 Bing Gordon (left) speaking at the TechCrunch Disrupt conference in 2011

“I remember we went to a department store in Boston. I went there as Bill Budge the star maker of Pinball Construction Set. I was in my usual nerd costume — sneakers, worn-out jeans, a T-shirt. The store manager saw me and said, ‘He’s not going to be in the store dressed like that selling games.’ He saw us as, like, extra help for the salespeople, working behind the counter trying to sell games.

“Bing took me through this department store and bought me a whole outfit, a really slick set of clothes. Bing was pretty hip. He got me some nice slacks. Not a suit, but slacks, a nice shirt, some cool gray shoes. Stuff I never wore again.”

After that, there were no more retail promotional tours. The developers were no longer being paraded around for the sake of marketing. By the mid-1980s, it was all about the contracts.

“We gave them very fair business terms,” says Bonn. “Our agreement was specifically fashioned to be understood by humans. The competition’s contracts had all this crap in them about deducting marketing costs. I said, ‘Nope, you and I, we all get paid the same out of the same dollar. I’m not going to deduct anything.’”

EA flew developers in for fun days. It handed out shiny jackets and other freebies sporting the EA logo. Bonn claims the Game Developers Conference was first organized by game designer Chris Crawford (then called CGDC) as a reaction to these jolly events, for non-EA developers.

Crawford denies this. He remembers EA differently. “I attended one EA powwow and it was almost entirely a promotional party,” he says. “There was little or no discussion of game design ideas, as far as I can recall. EA did play a distant role [in GDC’s formation] because there were a lot of developers who felt that they needed some sort of independent organization or union to help even things out. There was a lot of resentment against the publishers in those days.”

Something new was happening in game development that EA had not anticipated. Games became bigger, louder, prettier. They included writing and sound effects. They required larger teams and more specialization. EA found itself negotiating with companies, not just individuals.

“With the early games, we would introduce the developer to an artist,” says Bonn, recalling how projects first began to expand in scope. “I always had musicians and sound effects people that were independent contractors and I put them on these projects.

EA rented apartments in San Mateo and flew team members into town for deadline crunches, managing the process of getting games out the door. The transformation toward a company that developed its own games, rather than merely published games, had begun.

EA’s management was often frustrated that deadlines were missed or that developers went in creative directions that the company had not anticipated. Developers were put under pressure to deliver. Relationships became strained.

1987 was the year of big hits like Chuck Yeager’s Advanced Flight Trainer and Earl Weaver Baseball. It was also the year of a skateboarding title called Skate or Die!, the first game developed internally by EA. The game was part of a wave of 1980s multi-event titles, based loosely on Epyx’s Summer Games and its spin-offs. EA was now in the business of targeting genres.

Development and production chiefs at EA spent the next few years experimenting with internal development efforts, oscillating between the control of having its own studio efforts and the significant cost savings of using external developers. This conflict would lead, down the line, to a new and equally fraught strategy of identifying successful studios, buying them and seeking to incorporate them into the company fold.

One significant downside of the first internal developments, says Bonn, was that external developers assumed that EA would put more marketing effort into its own titles. Bonn says this wasn’t true — the only thing that mattered was hitting margin on all titles — but it became received wisdom among EA’s development clients.

In fact, internal development was expensive and difficult. EA struggled to find the right way to proceed with its internal efforts, but one thing came along that persuaded the company to persevere: annualized franchises.