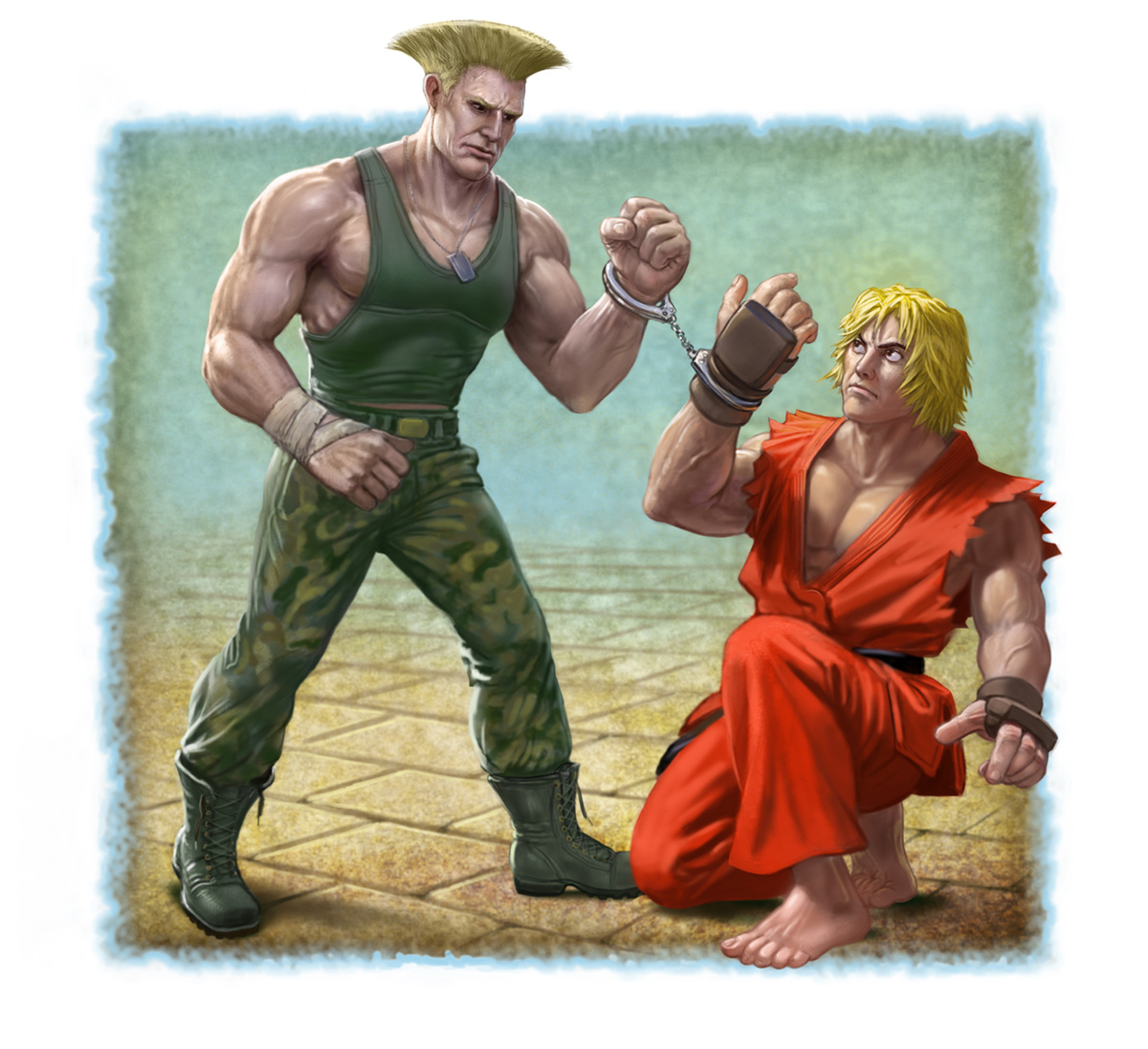 Despite widespread rumors at the time, Guile's handcuffs never actually appeared in Street Fighter 2 — they were instead a glitch that made it look like he had his opponent in handcuffs. So for this section, we asked Mick McGinty to draw Guile with Ken in literal handcuffs, figuring that would read better than a stunned opponent.

By any standard metric, Street Fighter 2 was a success in arcades. And success also meant issues with players discovering glitches — the more people playing, the more glitches they found. The most infamous of these centered on the character Guile. While using him, players could freeze the machine, stun their opponent (in a move nicknamed "Handcuffs"), grab their opponent from across the screen (nicknamed the "Air Throw" or "Magic Throw") and break the game.

For some players, these glitches made for fun trivia. Many at Capcom saw it differently.

To a developer, a bug is shameful. Total shame. And if the game sells a lot, that makes it even worse. Street Fighter 2 happened to be a game that went out with a lot of bugs. ...

One is that, most people didn't realize it, but Ken was stronger than Ryu. They were the exact same program, but because of one factor, Ken was stronger. We had this idea that after a player does a Shoryuken, we were thinking of adding a weak point so their guard would be down and the other player could inflict a lot of damage with a single hit. We were going back and forth on whether we should include that in the game, and we decided not to do it, but we forgot to take that out of Ryu's code. So in the end, Ryu and Ken had exactly the same code, except for that one point.

The same thing happened with Blanka as well. When he does his rolling attack, there's one weak point we forgot to take out so he took huge damage from a Hadouken.

Guile had a particular move where he would start a throw animation, and then you would be stuck — your sprites would be basically conjoined for the rest of the match . ... And likewise, he had something called the Air Throw where he would make a throwing motion, and it didn't matter where you were on the particular playfield — you would just immediately take throw damage and fall directly to the ground. And that was kind of disconcerting. ...

And then there was an even better one where a Guile player, if they knew what they were doing, was able to reset the machine right there on the spot with a particular command setup there between the joysticks and a couple of buttons.

I was extremely disappointed. There was an arcade game magazine called Gamest in Japan, and it seemed like somebody from Korea sent in a video called "The Horror of Guile," and it showed the glitches. When I first saw it, I thought, "No, this can't be true." And then I found out it was true. That was a very shocking moment.

That was actually my first programming job at Capcom when I joined the company. So the hardest thing was basically everything — getting used to the difference between what I learned in school as a programmer and the way you really do things on the ground. ...

I'll tell you the story of when I heard about [Guile's glitches]. We were having an event where we had invited players and journalists to come play Street Fighter 2. It was one of the first times it was even out there — it was just starting to get big — and the higher-ups picked me to play an exhibition match against some users. We were having the staff play against other people. And a journalist — a game journalist, a Japanese guy — approached me and said, "Hey, check this out. I found this crazy Magic Throw with Guile." And he showed it to me. When I first saw that, the first thing I thought was, "I have to quit. I can't do this anymore. I think I'm gonna quit my job." And luckily, Mr. Nishitani said, "Hey, if you're gonna let something like that bother you then you can't make games anymore period. You can't go to another company and do it either. This is part of the business." So he stopped me from making any drastic moves. But yeah, I felt terrible.

I remember Mr. Eshiro coming to me, yeah. He was new to the company at that time and there were processes he was supposed to take, but I don't think he went through all those, which led to the bugs. So because of that, he felt really responsible and came to me, but I didn't take it that seriously. I was like, "Oh, what are you talking about?" I never seriously considered letting him quit.

You know, in a game of this complexity, things were bound to crop up. ... Obviously you want a product to be perfect, but in the coin-op world there was no way to really do ROM upgrades. ... It's not like you could have a Wi-Fi enabled arcade cabinet that you could dump a new ROM to very easily. It was just a product of the time. There's bugs everywhere. It's just damn hard to fix them when you've got a static board.

It's more disappointment than anything else. I mean, glitches are gonna happen, but the fact that it was something so nasty that — depending on the rev of the board — that basically that'd be it, quarter over. I mean, the fact that it was ruining players' experiences and creating drama, that wasn't necessarily good for Capcom's reputation with the operators, because that was starting to impact money.

A lot of players would ban those moves and play a clean game, so I really appreciate how kind they were to support the game in that way.

While the discovery of glitches disappointed many at Capcom, a more expensive side effect of Street Fighter 2's success was that it led to counterfeiters producing illegal copies of the game. Counterfeiters poked a hole in the financial model of the coin-op industry, where games sell with high margins to offset low sales numbers, and sold games for less than a third of their official price — and in wider quantities than Capcom was able to manufacture.

After releasing the sequel Street Fighter 2: Champion Edition, Capcom even ran an ad in trade magazines warning arcade operators of "criminal prosecution and civil damages" for purchasing and operating counterfeit versions of the game. Within Capcom, much of that early work fell to General Counsel Ian Rose.

I joined Capcom in '92. ... They'd come to the conclusion that they were at the point now where they could save some money by bringing the legal function in house. ...

One of my big challenges in that period was to try to ... make it harder for the pirates, the copycats, to succeed.

And it was an interesting thing, because it's not piracy as we think of it these days with mostly pure digital assets. Instead, these were people who were coming up with pirated versions of the game on a piece of hardware — you know, a printed circuit board that had to be in some ways designed from scratch. So it was kind of a worldwide phenomenon that, as the game became as successful as it was in the arcades in the first instance, it became something that developed on an international level as we understood it, by folks in different countries playing a role in the design and manufacturing and distribution of these counterfeit Street Fighter 2 boards. ...

In a year let's say, or in a several month period in the early days of the Street Fighter 2 arcade game release, we might have sold 25,000 units for example. And we had reports and estimates of maybe several times that number of counterfeit versions out there in the marketplace.

Capcom itself didn't sell a single copy to Mexico, but there were like 200,000 copies in Mexico. So there was a whole bunch of illegal copies around the world.

We tried to get law enforcement involved [in tracking down illegal copies] where we could, both here and internationally. We hired law firms that could help us file lawsuits against those that we, through investigation, found to be distributing the games. ...

We had some successes. ... I remember that we had, for example, in Taiwan — which was probably where a lot of the hardware was originating — we had a law firm help us with the Taiwan police to go after a group over there that [was] at least a source on some level of the pirated boards. 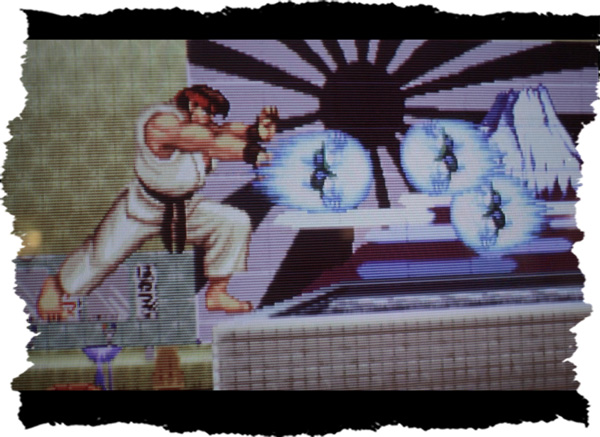 The hacked Street Fighter 2: Rainbow Edition allows players to throw multiple fireballs at a time while in midair. 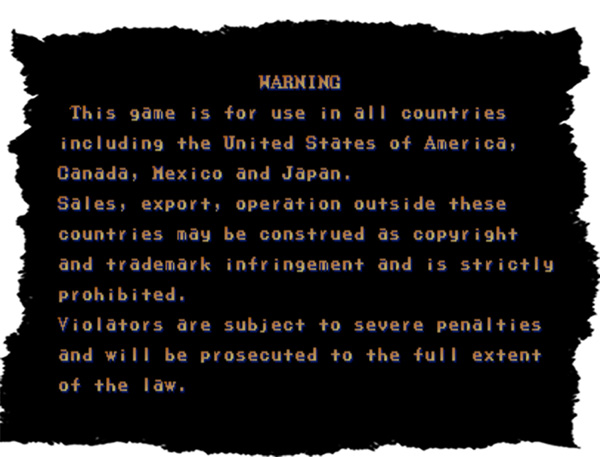 When arcade operators booted up the game, they saw this message warning against overseas sales.

And obviously we were on the U.S. side. We had our parent company in Japan. But I came into Capcom as legal counsel on the U.S. side before they had much of a legal department in Japan, at least with real lawyers. So we ended up running a lot of this anti-piracy program from the U.S. So even in Taiwan we were the ones working with our lawyers and the police over there. We sent one of our technical people over. There was a raid and a litigation and so on that, at least temporarily, put those folks out of business.

And we did similar raids on the U.S. side. We had everybody from the local police to the FBI to customs people involved at different times in doing raids or interceding shipments of games coming in through the border. ...

There was kind of a high-class problem, but a real problem, of limited supply. The demand was such that we couldn't keep up. And so that of course drove the counterfeit sales, and it meant that we had issues with how many we could sell.

I was turning away orders because we just couldn't place them. We couldn't get enough product.

[Ultimately, I'm not sure] whether it was productive or not. ... It was like Whac-A-Mole. You felt like it had to be done, but you knew you had no chance of being completely successful, or even significantly successful. There was such a profit incentive in doing the counterfeit stuff, and [it was] so hard to catch any big chunk of it. And you know, I remember having that discussion internally of [whether it was worth the effort]. ... We probably one year spent upward of a couple million dollars in legal fees — and maybe that included some of the Data East litigation; that was also very expensive. ... But it was a high-class problem, because the company was doing very well despite those problems. 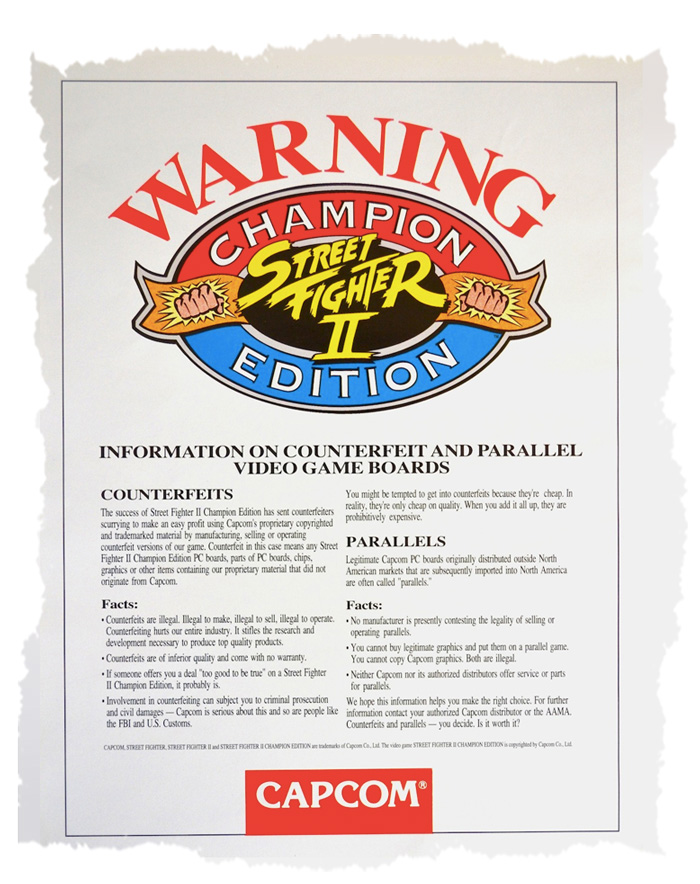 In an attempt to dissuade arcade manufacturers, distributors and operators from purchasing counterfeit Street Fighter games, Capcom placed an ad in trade magazines calling them "illegal to make, illegal to sell, illegal to operate."