Next week at E3, Sony will begin to show its hand for the launch of PlayStation 4 VR headset Project Morpheus. We know it’s coming by June 2016. We’ve seen a bunch of first party tech demos and third party games. And soon we should have a clearer picture of what the hardware’s launch will look like.

Ahead of the show, Polygon did a quick Q&A with two of the people behind the hardware — Richard Marks, director of Sony’s Magic Lab research group, and Jeff Stafford, senior staff software engineer — to get some background on Sony's plans.

Polygon: What do you see as Morpheus’ biggest advantages compared to the competition?

Richard Marks: Well, there’s a lot of technical advantages right now. But I think still the biggest advantage is the fact that we have this very known everything. We have a known set of controllers. We have a known platform, a graphics system that every single person that runs it will have. So this kind of controlled environment is really good right now, I think, for a developer. ... Just knowing exactly how it feels when somebody wears it is a huge thing that solves so many problems that other people have to worry about. And eventually, the hardware will get fast enough maybe that some of that will be less of an extreme problem than it is now. But for now, it’s [a pretty big thing].

And also, the controller’s still a really big deal. Every single person that would ever own a Morpheus definitely owns a DualShock, right? That controller’s just ubiquitous for PlayStation owners, so that’s a great thing for developers to have as a known. And also distribution ... everything like that. It’s just a very easy environment, I think, for developers.

I think it just all fits well together too. The amount of horsepower it takes to drive our headset is pretty well matched by the PS4, so you’re gonna have a good graphical experience. It feels like they were designed together, so they all go together. And other systems will probably iterate, and it’ll start to be that they get out of sync and stuff. You know, you might need a new PC if you get a new headset or something. 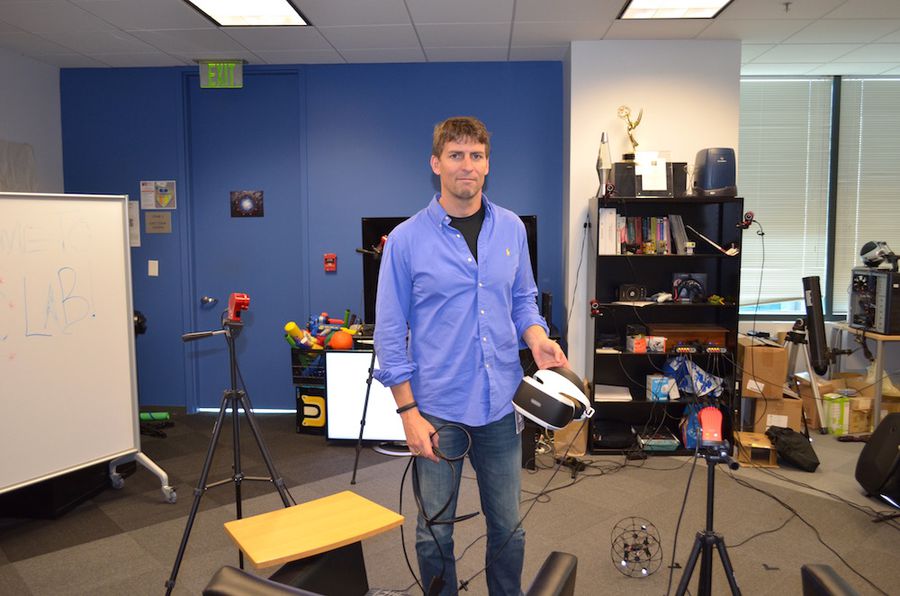 Ours I think just feels like a solid — it’s pretty much the same way a console feels all the time. If you like the way consoles work, where you know if you put a game in there it’ll just work — there’s no driver to download and stuff — we have that same VR experience. I know it’s not the hardcore tech argument. ...

It’s helping, I think, the whole VR community by having a kind of solid business story. There’s a solid story for business. We have an environment. There’s gonna be a store where you can buy things at. And it’s gonna run the same on every unit. So all that stuff is a known.

And I don’t think there’s a huge, “But it doesn’t do this” part either. There’s not a tech [shortcoming] that is clear right now either. We have a really — you know, we have the highest refresh rate on our display right now that anyone’s shown. We have positional tracking and you have a pretty good workspace. Yeah, so it just feels like it’s a very solid system and it has these extra business advantages.

Polygon: How many people at Sony are currently working on Morpheus?

Jeff Stafford: That’s a really hard one ... Most of the teams are in Japan. So the PS4 [software development kit] team — they’ve been working on the PS4 SDK for awhile and it’s mature, so a lot of that team is now working on the Morpheus SDK and supporting Morpheus. And there’s the system software guys that work on the PlayStation UI and system UI — again, that’s quite mature. Obviously they’re all still working on new features and things like that, but some of them are also working on Morpheus.

I can’t give you a number, because honestly, every time [there’s] some new thing that they’ve added and I talk to them, there’s two or three people who get on an email thread and I’m like, “Oh, I’ve never heard of these people before.” And it’s like, “Oh yeah, they’re working on this.” So it keeps growing. I would say hundreds. Globally, well over 100 easy. Probably easily over 100 just in Japan alone. ...

People actually involved in some way with Morpheus is huge right now. It’s on a much bigger scale than it ever was for PlayStation Move; I can tell you that. So always people have these fears like, “Oh, it’s not going to get supported like PlayStation Move.” I don’t think that’s the case. There are massive amounts of support internally. 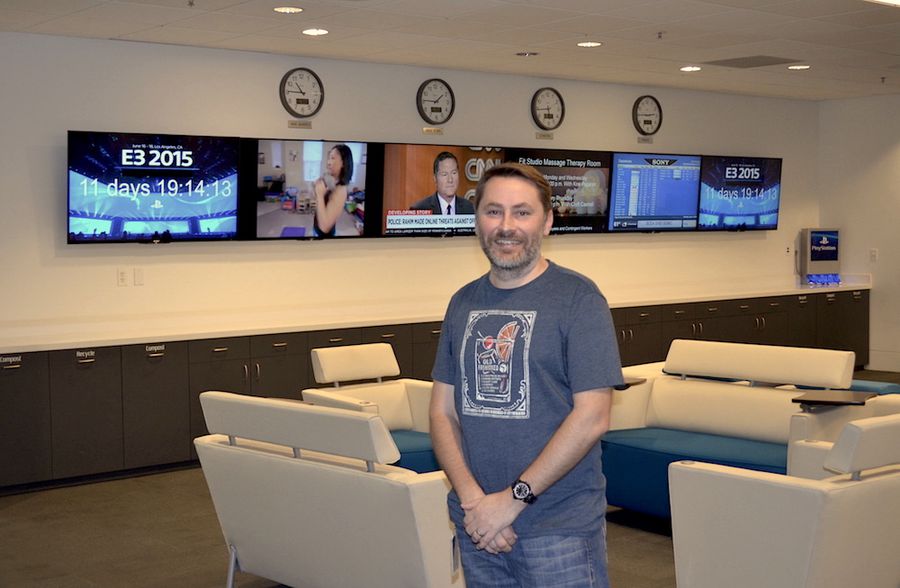 Polygon: Have you done any research towards a new Move controller?

RM: We’ve looked at it in the past, of what we’d be interested in. I mean, the Move was originally designed to work with the PS3 camera, the PlayStation Eye. And it works better with the PS4 camera, but it actually could be redesigned and have some of the restrictions we had before taken away. For example, the new camera’s higher resolution and it’s stereo, so you get 3-D automatically. So there’s some things we could change.

But it’s not like the Move currently — it’s not like there’s a thing that we know that we’re being held back by, I think, with the Move, that’s like, “Oh, this needs to be fixed.” So I think that’s why it’s not an urgent thing. It’s more like, “If we do change this, we want it to change in a pretty dramatic way,” because right now it is serving the purpose of what we want it to do. It’s like, a slightly better Move I don’t think would help very much.

Polygon: The Move isn’t very easy to find these days. [Is Sony planning] to produce more of them?

RM: I mean, we already currently support Move, and there are some PS4 products that support it. Exactly how it will be reentered into the market and stuff, we’re not really talking about that yet. Even how Morpheus will exactly go out we’re not talking about. 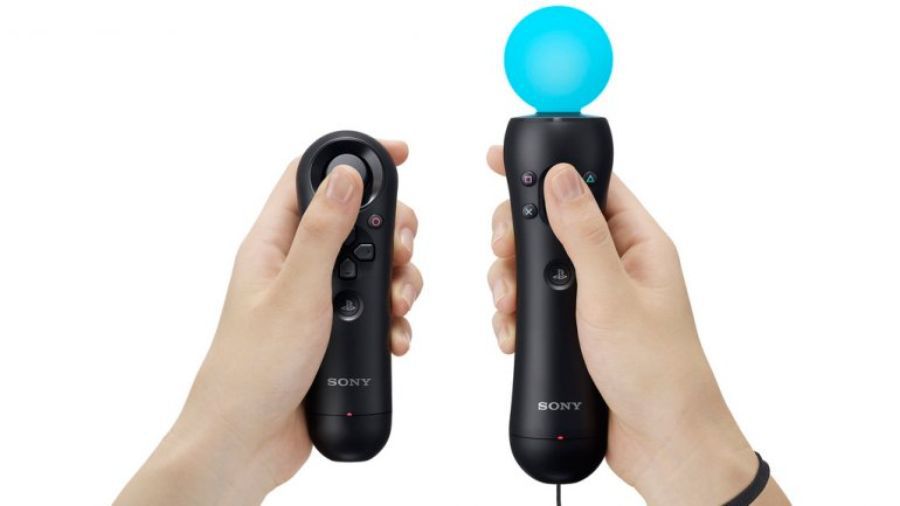 Polygon: Five years down the line, where do you want to see Morpheus that it’s not today?

RM: It’s hard because the curve of VR is so fast that it’s hard to know. I’m amazed that our hardware guys were able to get things all working with 120 frames per second like that, and the optics are so good right now to look at the screen and not see too much artifacts, so I expect if we stay on these kinds of paths that that will all get better.

I would like it to be that people do think about what you’re going to do in VR and give you really — I really like to do stuff in VR and not just look around. So for me, I really hope that we stay equal to the other kind of content that gets created for VR, which is more passive. Not just Sony, but as an industry I hope we don’t just sit back and say, “Oh it’s good enough to just look around.’ Because [I think] that’s undercutting what VR could be for games.

I expect we’ll have better interfaces. There’s a lot of stuff where when you look down you would want to see [your feet]. I think it would connect you to the experience better. And I don’t think we’re done. I think we have a really good system, and I feel like we passed this kind of threshold where now this can be a product. But I don’t feel the engineering is near the end of what can be done. So I expect you’ll see [more].

JS: Every aspect of it can be improved. We’re only just starting. The killer app of VR hasn’t really been discovered yet. I think Oculus has said this too. And you know, one thing I’ve found is like any experience, once you get a taste of it you want more. ... There’s so many experiences that can be created with the current technology. We haven’t really seen any of it yet. We’ll start to see it soon.