The men of Fireproof Games are on a decidedly different path to where they were just a few short years ago. Formed in 2008 by six former Criterion Games employees, the team first met while working together on Burnout 3, before eventually creating the critically-acclaimed puzzle game series The Room.

It’s an impressive resume; however, when asked how that experience has prepared the team for its recent foray into VR development, Commercial Director Barry Meade says that, in truth, it hasn’t.

Omega Agent is a jetpack and spy training simulator on Samsung’s Gear VR, a game that tasks you with perfecting the niche art of blowing-up robots while maneuvering the crystal VR skies via jetpack arabesques. According to Meade, coming up with the premise was easy. It was the result of discussion over the merits of James Bond, The Jetsons and Nintendo’s Pilotwings. But building the game for an entirely new platform was uncharted territory.

Speaking with Meade in the weeks following the launch of the team's first virtual reality title, he says that even the ordinary aspects of game creation are made "mind-bendingly weirder" when you’re developing in virtual reality. Despite the team's years in the game industry, he says the most challenging part of VR development is no one knows what they’re doing. 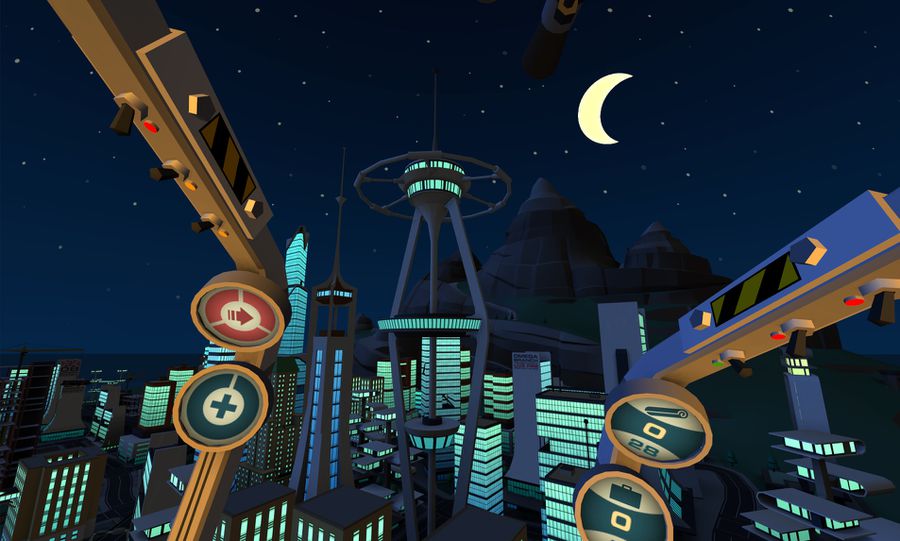 "VR is so visceral, so real that you have to worry unduly about how comfortable the player will be at any given point of gameplay, because at some stage their brain actually will believe they are half a kilometer above ground about to jump off a skyscraper," says Meade.

"For us as a team, making Omega Agent was also an attempt to find and map where the gaming territory of virtual reality might be," he says. "Because we're new to this and we just don't know. Making something on a standard platform you have a hundred classic games to draw ideas from and you can take that crutch for granted. But when a platform is all new like VR there are no standards yet, there's little to build on, so your task is that much more interesting/terrifying.

"Even recreating very familiar aspects of games, such as a usable HUD, is pretty bloody counter-intuitive on VR."

In Omega Agent you play one of those trainee secret agents left to maneuver their new Frankensteinian vehicle. Part mobile rocket, part death machine. A missile launcher and machine gun are mounted atop your virtual head, while jets sit either side of you.

"The idea for the game came from us chatting about outlandish possible VR situations and someone suggested being let lose in a virtual city with a jet pack would be stupid fun," says Meade.

"The idea grew from there really. Bond's jetpack in 'Thunderball' was cool so we imagined a 1960's world where MI5 built a secret island training facility for pilots of nuclear-powered jet packs. You play one of those trainee secret agents and your goal is to ace lots of different missions, rise through the ranks and blow up few robots as you go. We also threw in a visual dash of The Jetsons which worked well with the clean, bright, Pilotwings art style we were going for and the overall 1960's-of-the-future look to the game." 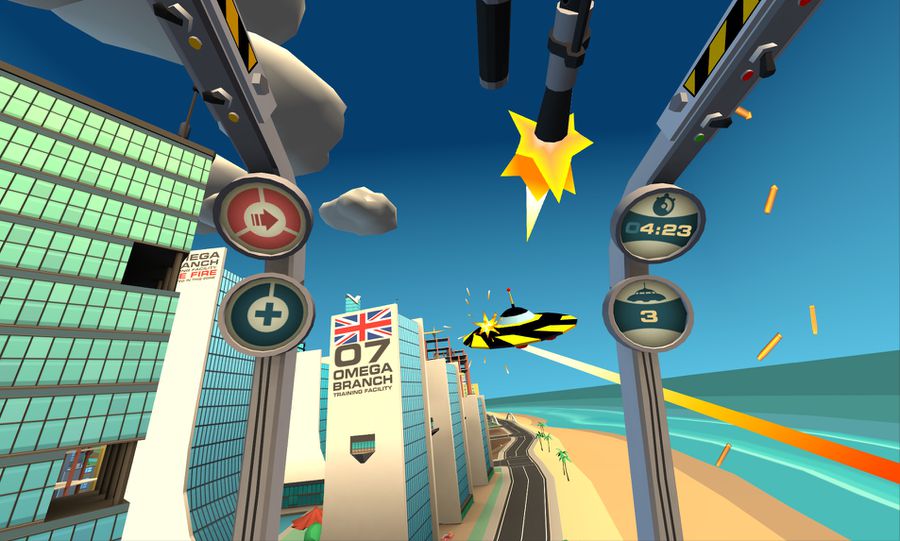 The game asks players to explore the grounds for top-secret documents, shoot down a barrage of robot scum, test their jetpack speed via waypoint race and so on, with a goal of climbing to the upper echelons of spydom.

To learn how to control the jetpack takes minutes, powered by the Gear VR’s attachable Bluetooth controller. Learning how to accurately turn and fire at your mission targets is more of a dedicated skill: You’re not only controlling a flying machine, you’re teaching your brain how to respond to being miles into the air, with the buildings growing small under your feet.

There are benefits that come from developing for a new technology, says Meade. "There are few pre-set expectations in VR, it's all wide open and there's so much more to play for. I suppose in a sea of potentials, Omega Agent is our attempt at shaping what a playable VR game might look like."

Omega Agent launched in May for the Samsung Galaxy S6 smartphone and its spin-off the Galaxy S6 edge, and is currently available for $9.99. The studio plans to bring the title to Oculus Rift, Project Morpheus and HTC Vive at a later date, according to Meade. "We plan a lot of graphical upgrades to match the power of the PS4/PC platforms," he says. "It'll be a different beast visually for sure."