But the real growth has been in the book store market

DC Rebirth has "more than 100 percent exceeded what our expectations were," DC Comics co-publisher Dan DiDio said at this morning’s DC Comics press breakfast at San Diego Comic-Con. "For us it was a reaffirmation of people’s belief in DC and what we’re able to accomplish."

DiDio was unable to share specific numbers, but he and fellow co-publisher Jim Lee still had some surprising details to share. For one, DC’s sales for the first week of August alone — which are available to the company due to the particular mechanics of comic book preordering — are nearly as big as their sales numbers for the entire month of April this year.

Rebirth is also defying expectations in its ability to hold on to readers. First issues of a new comic series generally sell three-to-four times better than their successive issues, but Lee told press that DC has been seeing Rebirth #2s outselling #1s, pushing the usual sales drop back an issue and more.

"But if you want to know where the real growth in comics is," DiDio stressed, "it’s in the book store market, the mass market," a fascinating thing to hear from one of the biggest publishers in a business that’s still very focused on month-to-month sales of single issues. "The collections, the graphic novels, that’s what we see growing bigger and bigger. Between Amazon and Barnes & Noble's, we see those expanding on a regular basis." 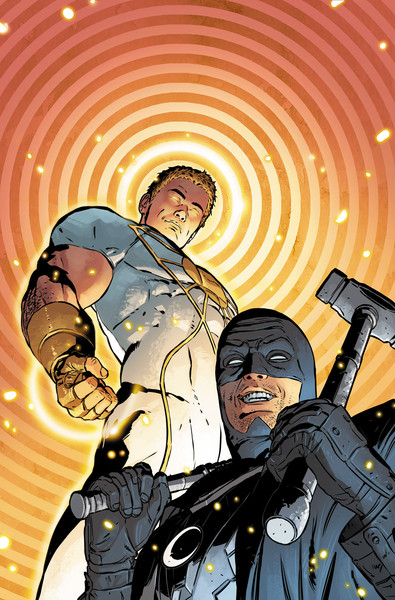 That expansion in the trade market has directly affected creative decisions at DC, particularly in the case of books with periodical sales numbers neither extraordinary or truly dismal, but that land strongly in the book market. DiDio cited the example of Midnighter specifically: a very well received and reviewed book that saw more life as collected graphic novels than as a monthly periodical. Midnighter recently saw its final issue hit shelves, but its periodical sales helped win the book a follow-up miniseries, Midnighter and Apollo, due to premiere in October.

Graphic novel sales for DC are also being bolstered by the current bumper crop of television and film adaptations based on DC Comics characters. And that may be one reason why we’re unlikely to see too many comics set in the Arrowverse, the Snyderverse or other big screen versions of the DC universe. When you compare tie-in titles to sales of the collected storylines that inspired adaptations, the message is clear, DiDio said: tie in books don’t sell. But in a year where the Joker is featured or referenced in no less than three highly anticipated films (Batman v Superman: Dawn of Justice, Suicide Squad and the animated The Killing Joke adaptation), The Killing Joke has been DC Comics’ best selling book.

Amid all the sales talk, DiDio did take a moment to address fears that Rebirth was fixing many of the problems of the New 52 while rolling back many of the progressive strides of recent initiatives like the DCYou and Convergence.

"[Last year] was difficult for us because we moved a company," he said. "And we hired basically a brand new company to run it and do it while not missing a single book. ... It was extraordinarily difficult. But we got through it. And we feel that we launched DCYou at particular point because it allowed us to concentrate on, focus on, diversity and different ideas and different styles of storytelling. ... And when we went back to Rebirth, it goes back to a lot of the core stuff, and we don’t want anyone to feel like we walked away from diversity. Quite the opposite, as a matter of fact. We feel that the more we build up the primary characters and we find ways to organically expand our universe, I think everybody wins because people get more invested in them and we grow our business from there."

With Rebirth still in the midst of its beginning, readers will have to wait a little longer to really get their own sense of the true shape of DC’s new expanding universe.

All the news from San Diego Comic-Con 2016