What happens when President Obama finds out about the Suicide Squad?

Share All sharing options for: What happens when President Obama finds out about the Suicide Squad?

President Obama has a cameo in this week’s Suicide Squad, and he’s not happy about it.

Suicide Squad Rebirth #1 hits shelves this week in order to set the stage for DC’s post-Rebirth incarnation of the notorious covert ops team, and gives readers a look at what happens when the government-sponsored team comes to the attention of our current commander in chief. Obama calls Amanda Waller, the director of Task Force X (the Suicide Squad’s official name) on the carpet of the Oval Office, saying her operatives are unhinged. He’s not wrong.

It’s not uncommon for celebrities and public figures to cameo in superhero comics, of course, but since the Suicide Squad is a government-funded illicit strike team of convicted supercriminals with an incredibly poor record of keeping its operatives alive, the comic has collected more than its fair share of not-so-veiled presidential cameos. Coming in a book that represents a new beginning for the Squad, Obama’s appearance can be considered a direct callback to 1987’s Secret Origins #14, in which none other than Ronald Reagan greenlights the formation of the Suicide Squad.

In fact, Obama joins a prestigious group of American presidents who’ve been written into issues of Suicide Squad, including not only Reagan but presidents Harry Truman and George H.W. Bush. And also Lex Luthor, you know, from that time that he was president. 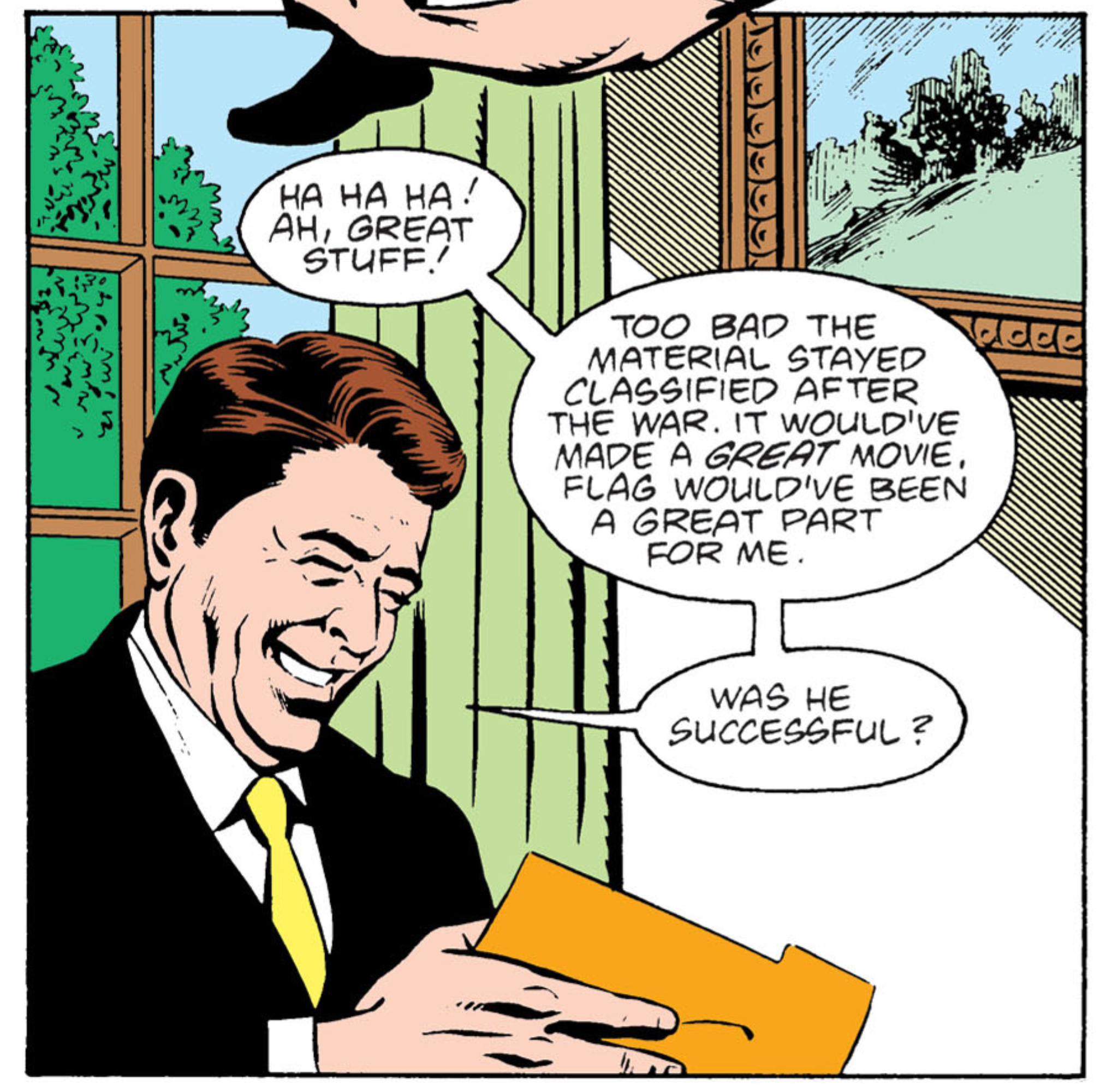 When Reagan appeared to approve the formation of the Suicide Squad, he wasn’t actually named — he was just drawn to look like Ronald Reagan, and some jokes were made about his past career as an actor. Obama’s cameo is similar: He is never named, but the likeness is clearly deliberate.

"You’ve managed to keep a lid on things by sheer force of will and bloody-mindedness, it seems," he tells Waller, brandishing photos of Killer Croc in chains and Harley Quinn biting a guard’s ear off, "but can you imagine what would happen if the world discovered your team’s actions were covert missions for the United States?"

To the President’s credit, he states in the issue that he was not even made aware of the existence of the Squad until his second term in office. Over Waller’s insistence that the United States needs the ugly reality of the Suicide Squad in order to protect its ideals, Obama orders her to find a better representative than herself to hold the group accountable. Ever ready, she proposes decorated Colonel Rick Flagg, a character who has a long history playing the Squad’s governmental minder (Joel Kinnaman is playing him in the film adaptation).

For what happens next, you’ll have to check out the whole comic. Suicide Squad Rebirth #1 is written by Rob Williams and drawn by Philip Tan, and it’ll hit shelves tomorrow on Aug. 3.