Yes, that is Bane, and he’s riding a tyrannosaur

Share All sharing options for: Here’s the one Suicide Squad comic no one else will recommend to you

Ok, I admit, that title is a trick. I’m here to tell you about Secret Six. But wait, hear me out!

The Secret Six and the Suicide Squad are both teams who specialize in illicit, international covert operations and feature:

The Six and the Squad have a lot of superficial similarities, but they differ in ways that say interesting things about superheroic morality.

The story of the Secret Six begins proper with writer Gail Simone, who remade the Silver Age version of the team from a group of spies and operatives lead by the mysterious, anonymous ‘Mockingbird,’ to a group of supervillains and mercenaries lead by the same. Formed during a 2005 DC Comics event in which nearly all of the world’s supervillains united to form a single conspiracy, the Secret Six were a group made of the only villains who refused to be coerced or intimidated into joining up. 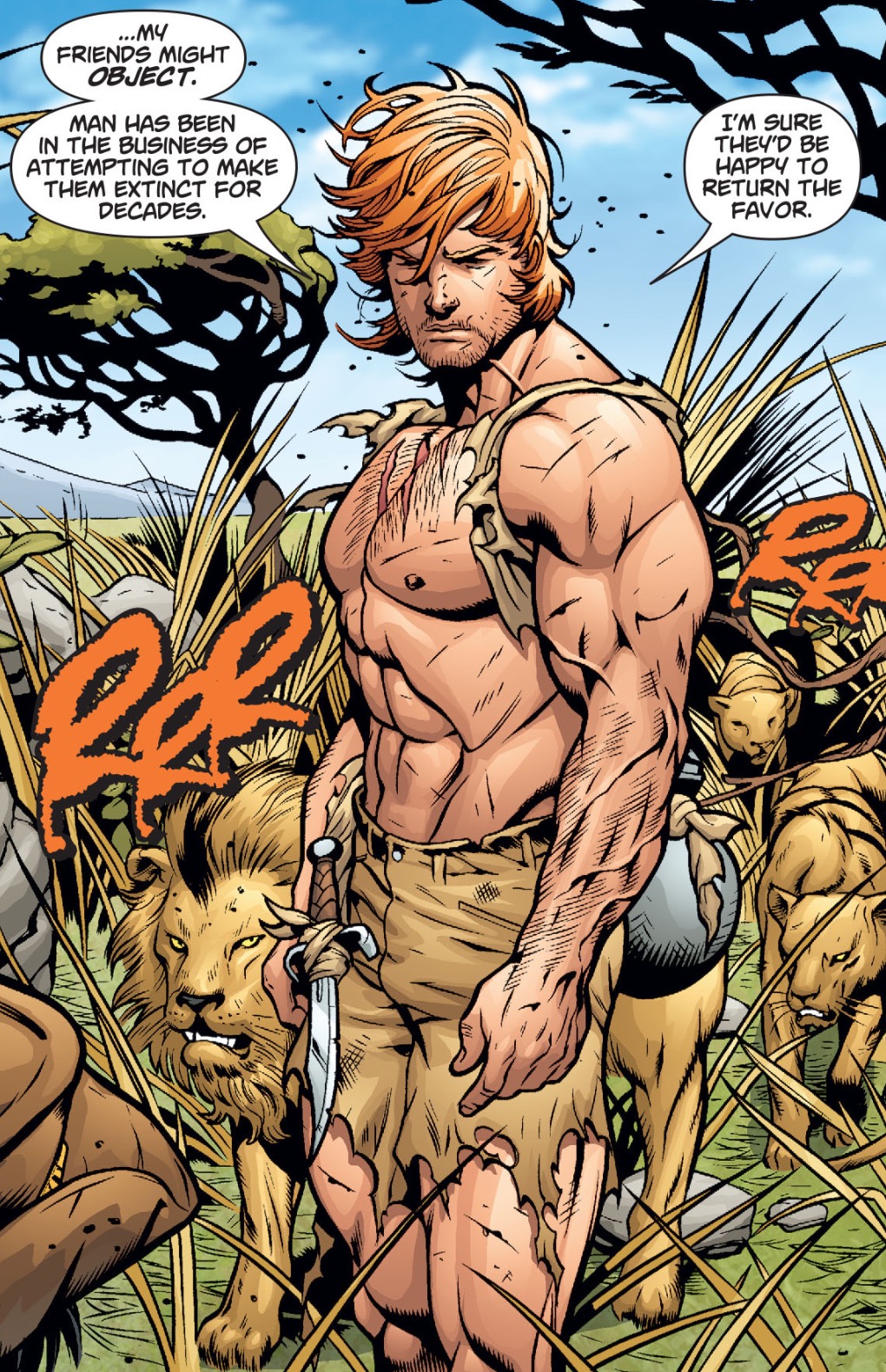 The team’s ability to walk the line between superheroism and supervillainy without ever completely falling into one or the other is perhaps best embodied by its most consistent member, Thomas Blake, alias Catman. (Yes, in the DCU there’s a Catman, a Catwoman and a Wildcat, they all dress like cats and they all have unrelated origins.) Catman was a flash in the pan ‘60s era Batman villain with only two appearances under his utility belt. He wouldn’t be picked up again until the ‘90s, as part of a self-described loser supervillain teamup, and wouldn’t be featured again after that for another decade. In the ‘00s, he was revealed to have significantly let himself go from his rooftop running days, was easily defeated by Green Arrow, and was eventually abducted and eaten by an intelligent gorilla. (But not Gorilla Grodd. Yes, in the DCU there are two intelligent gorilla villains and their origins are unrelated.)

Then Gail Simone brought Catman back for her Secret Six. In the ensuing years, Blake had traveled to Africa and gotten his life, his skills and all of his muscles back, partially by befriending and living among a pride of actual lions. The whole eaten by a gorilla thing? Retconned to be part metaphor and part lie. Simone rebranded Blake as an expert tracker and hand-to-hand combatant, and he forms the moral center of the Secret Six, such as it exists.

Which is to say, when he comes across humans treating other human beings like garbage, he murders them. Especially if he’s being paid to do so. And he doesn’t understand why that should make him persona non grata in the superhero world. Frankly, he thinks its kind of bullshit that superheroes get to be all high and mighty while they beat people to within an inch of their lives and let people like the Joker stay alive.

Catman (with the crutch), Green Arrow (on the ground) and Deadshot

Yeah. That’s the nicest guy in the Secret Six, a Z-list supervillain with a bug up his butt about superhero morality. He’s joined by Deadshot, a guy who goes to see a psychiatrist not because he has a desire to kill everyone around him, but when he feels like he’s not in control of his normal, baseline desire to kill everyone around him; the assassin Scandal Savage, prodigal daughter of megalomaniac Vandal Savage; her wife, Knockout, an Apokoliptian war goddess; Black Alice, a messed up teenager who can steal the powers of any magic-user in the DC Universe; Jeannette, an actual banshee; King Shark, Bane and more. And Ragdoll.

I’m not even going to try to concisely describe Ragdoll.

(If you’re thinking "Hey, that’s more than six people," have an A+ for attentiveness. Like the Suicide Squad, the Secret Six have a certain amount of member turnover, and also sometimes just wind up having extra members on the team.)

The Suicide Squad is kept together only by the iron will of Amanda Waller and her numerous surgically implanted bombs. Otherwise, it’s a team where practically every member hates every other member’s guts. But the Secret Six are a group of equally amoral criminal loners, kept together by nothing but the slow realization that there’s no one else in the DC Universe who understands their unique place in it as well as their teammates do.

Not that any of them would ever admit it.

Each relationship in the Six seems like it should include the phrase "of all people." Deadshot and Catman, of all people, are the best friends either of them will ever know. Bane, of all people, appoints himself the unconditionally loving and supportive surrogate father of, of all people, Scandal Savage. There’s a moment in Secret Six when one character realizes that they have it in them to torture someone for the life of their beloved, but not to kill a prisoner in cold blood. When another character kills the prisoner for them, before he can be stopped, he is rewarded with the first character’s sincere thanks. 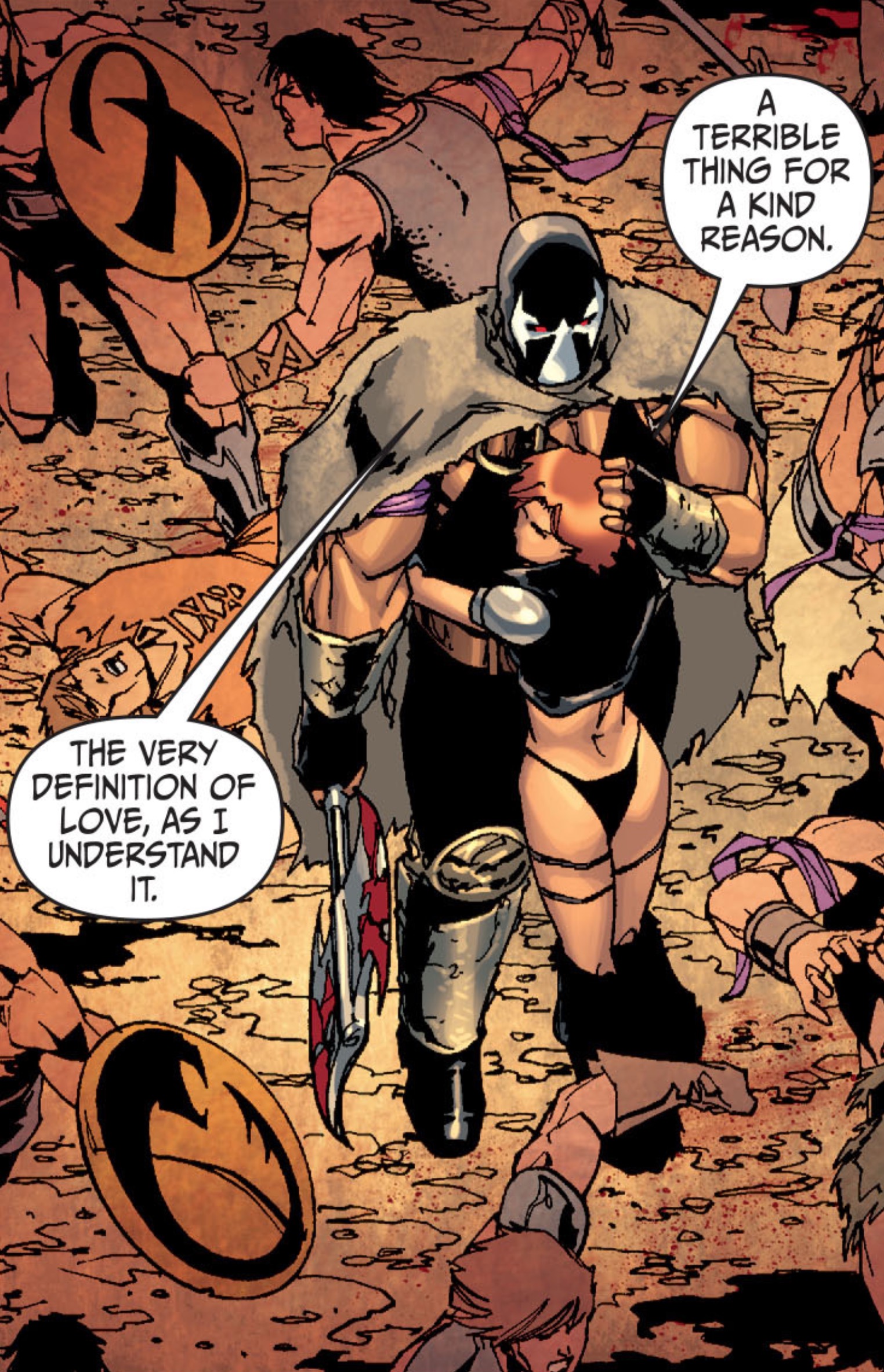 In nearly every arc of Simone’s Secret Six, the group disbands halfway through their mission due to irreconcilable ethical differences, betrayal, or something else, and yet, when those bonds come close to breaking, you feel it. This is a group of horrifyingly efficient killers and sociopaths, but you find yourself just pleading with them to be more aware of their feelings. And by the end of the story circumstances inevitably, and believably, bring them back together again. Losers gotta stick with other losers.

And that’s, ultimately, why I enjoy reading and re-reading Secret Six, while Suicide Squad — brilliant concept as it is — sort of feels like a series of relatively interchangable missions. The Secret Six is a team that shouldn’t work, but it does — and it does precisely because of how Secret Six stories wrestle with the practical consequences of a setting whose social structures are based around adherence to metatextually necessary black and white moral rules. Ultimately, the Six are aligned by how much their universe forces them to need each other, not by how many years they need knocked off their prison sentences, and that’s far more compelling.

So if you’re done reading up on Suicide Squad and want more, I highly recommend getting your hands on Secret Six Vol. 1: Villains United, which collects the two stand-alone miniseries the team had before the beginning of their ongoing series (handily collected in another three trades). And then maybe check out the team’s New 52 title, which uses the same concept with a largely different cast of characters and a more surreally humorous tone.

You, too, can become a giant fan of Catman, of all people.