11 things we wish we knew when we were getting started

Part of Everything we know about Cyberpunk 2077

It took us a while to wrap our minds around Cyberpunk 2077, because it’s … different. It unfurls more like a pen-and-paper role-playing game than a video game. Some things will seem familiar. Others will have you fighting against your instincts.

Polygon’s Cyberpunk 2077 beginner’s guide is full of tips and tricks and advice and explanations that we wish we could’ve read before we started. We’ll demystify the game, teaching you what it took us hours to learn about its pace, conversations, classes, skills, headshots, side missions, finding loot, and why you should totally do optional objectives.

Cyberpunk 2077 is both an action game and a role-playing game, but not at the same time. You can spend hours investigating, traveling, building relationships, infiltrating, hacking, and discovering Night City and follow that with action scenes that rival Hollywood blockbusters.

Expect a campaign heavily weighted toward role-playing along the critical path. If you’re familiar with pen-and-paper RPGs, think of it as a campaign, rather than a one-shot.

We’re writing this first because it’s kind of jarring, and we wish we’d have known this before we started. Cyberpunk 2077 is in no hurry, and you shouldn’t be, either.

Role-play as a conversationalist, taking every opportunity to ask the optional questions highlighted in blue. You’ll learn a lot more about the world, which is where you’ll spend all of your time. Knowledge is the antidote for confusion, and the world of Cyberpunk 2077 is confusing, if only because it’s so different than ours.

No classes but what you make

At the beginning of the game, you must choose between three backstories. Nomad, Streetkid, and Corpo are V’s Lifepath. In any other game, you’d think of them as classes. They aren’t. They’re just backstories, each of which informs your version of V, the main character.

Each has its own introductory prologue mission, but every version of V begins with the same build. The only difference is the backstory, which gives a bit of flavor to your character.

Attribute Points and Perk Points let you buy options. Spend more of these on V, and you’ll increase the variety of things they can do.

If you want to play stealthily, for example, pump Attribute Points into Cool, which increases Crit Damages, Resistances, and Detection Time. If you want more cool stealth-focused moves, spend a Perk Point on Hidden Dragon, which is a perk available in the Stealth skill (Cool > Stealth > Perk), and then you can “perform non-lethal aerial takedowns on unaware targets.”

Want to unlock every door you see? Pump points into Body (strength) to force them open or Technical Ability to pick the locks. Want to hack bad guys on the street instead of busting in with guns blazing? Put points into Intelligence, which increases your cyberdeck RAM capacity (think of this as mana/magic points/MP) with each level.

Spend Attribute Points and Perk Points when they make a difference

Cyberpunk 2077 asks you to spend points during character creation, a moment at which you know almost nothing about the game. There really aren’t any wrong answers, so go with your gut. Your earliest decisions won’t stick you in a play style.

You’ll keep accumulating points as you play, earn XP, and level up, and if you’re anything like us, you won’t have particularly strong feelings about how to spend them for a while.

Our solution: Hoard them until you know that they’ll make a difference.

For example, you’ll spend a lot of time in conversation, and occasionally a dialogue option requires a certain Attribute value. As you can see in the image above, an icon appears to the right of the dialogue, showing you the minimum requirement for speaking your mind. That icon corresponds to the Attribute categories in the Character. In almost every situation, you can enter the menu, and pour points into the relevant category — Body, Reflexes, Technical Ability, Intelligence, and Cool — mid-conversation. Return to the game, and you’re free to speak.

This applies to way more than conversation.

If you’ve got points burning a hole in your virtual pocket, spend them on immediately relevant options. When you spot a locked door, spend Attribute Points on Technical Ability, which (among other things), “allows you to unlock doors.” If you’re wrestling with a particularly complex terminal, spend a Perk Point on Almost In!, which “increases the breach time for Breach Protocol by 20%.”

Headshots will disappoint you

Every other game: Headshots are one-hit kills.

This is confusing, but it makes sense if you understand how Cyberpunk 2077 calculates damage. Upgrade your weapons, pour points into whatever skill is associated with the weapon you’re using, and look for perks that’ll increase damage. They're all related.

With enough time, leveling, and upgrading, you’ll turn your headshots into one-hit kills under the right circumstances. The trick is knowing that there is a lot of math behind the scenes that determines your damage at any given moment.

Side Jobs are everywhere, but they’re manageable

From early in the game, you’ll start getting phone calls and text messages about things people want you to do around Night City. These are Side Jobs, Gigs, and Hustles. They’ll come in constantly.

They’ll pile up and keep piling up, but don’t let the ever-growing list make you anxious. We knew that we were free to ignore them, but felt weird watching them pile up in our Journal menu. Don’t stress about keeping track of it all. Let them pile up.

Cyberpunk 2077 alerts you to Side Jobs based on your location. Say you’re driving around Night City on your way to a Main Job, and you get a phone call about a Side Job. Odds are if you stop and look at your Journal, you’ll discover that the Side Job is only a few blocks away. And at that point, it’ll be easy to knock off.

So let them pile up if you like. The game will give you a heads up when can peel off and take care of them.

Wow, is this ever some Captain Slow advice but hear us out: Driving in open-world cities is always, well … it kind of sucks. If you don’t care about mowing down pedestrians and outrunning the NCPD constantly, then by all means speed through the city. If you care about actually getting somewhere without incident, slow down.

Cyberpunk 2077 is coming in hot, and it’s kind of buggy. Get in the habit of saving your game, just in case something goes haywire. You wouldn’t want to, say, take out your gun after five minutes of driving across the city, just to discover that it randomly starts firing, and the whole place now hates you. Save every time you think “I’d rather not do that again.”

To Quicksave, enter the menu, and tap Triangle/Y/F5. That’s it. If (when?) something goes pear-shaped, reload.

Quick Scan every time you walk into a new building, a new room, a new street — actually, press L2/LB/Tab pretty much every time you think of it. We’re saying scan everything because you’ll basically always find something. It’ll sound like you’re taking a picture, and then you’ll see what you can interact with around you. 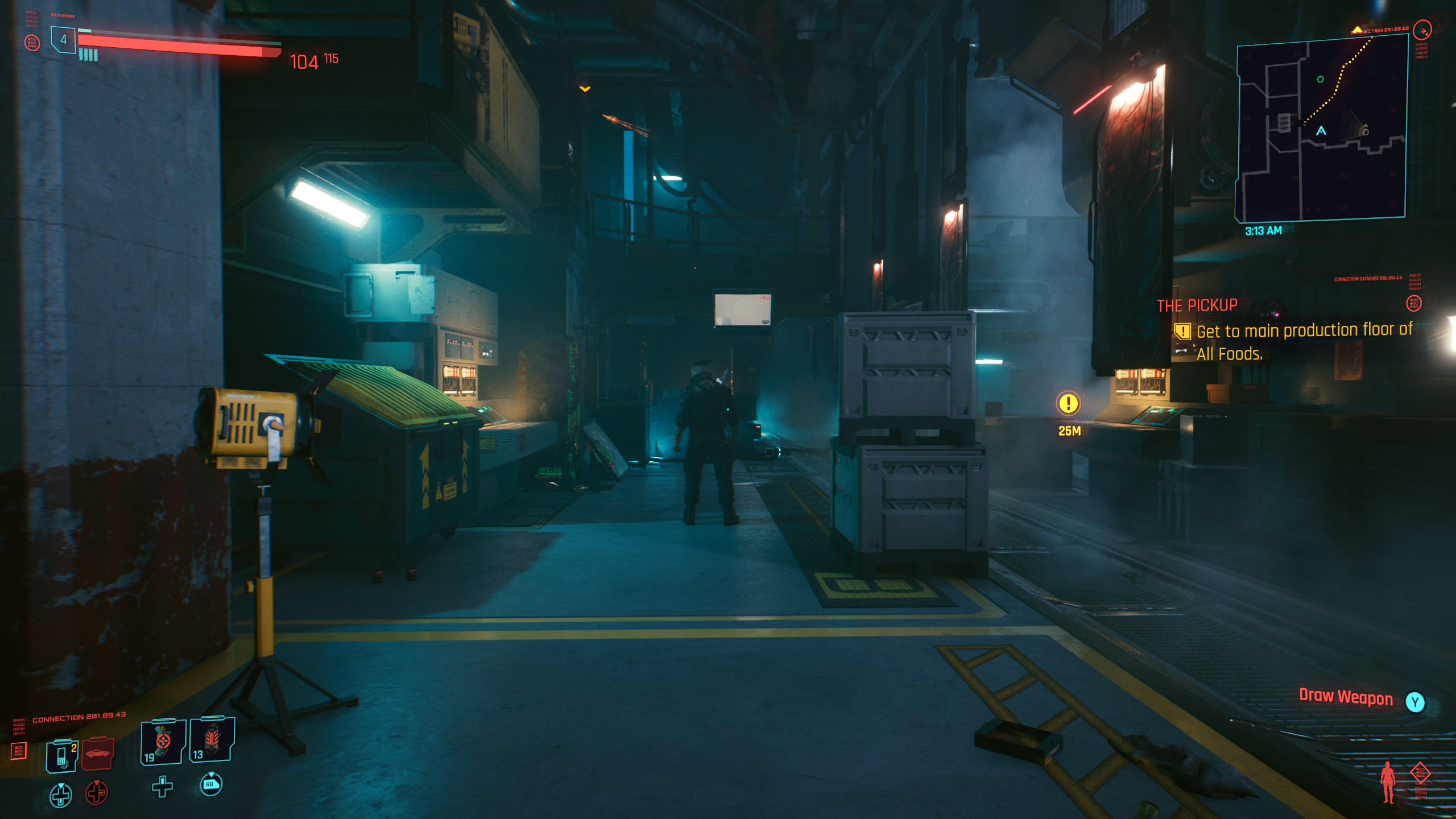 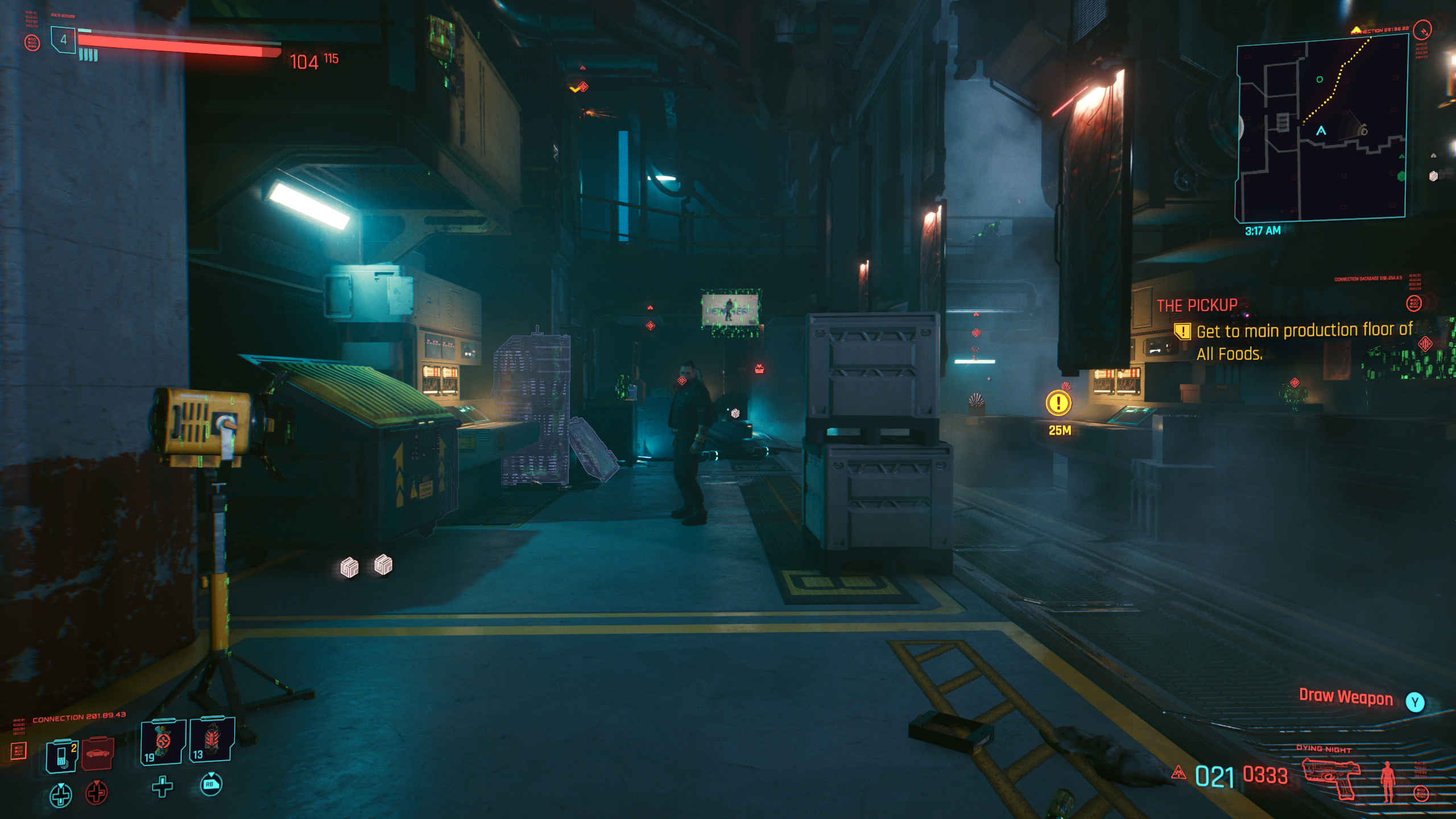 Sometimes that’s literal in-game junk. Sometimes that’s mission-specific flavor text. More often that we expected, it was a crate holding some solid loot that we wouldn’t have noticed if we hadn’t pressed the button incessantly like it was 1996, and we were trying to save a Works document in the high school Media Center.

No spoilers, but they have an impact on the game. And those impacts aren’t easy to anticipate.

Here’s a spoiler-free example. An early game main mission (Main Job) tells you that you can either meet your buddy or take a detour to meet someone you’ve never met yet. Both objectives are related to the mission. Do the optional one, and you’ll meet a couple of characters, one of which has an impact on the end of the main mission.

You won’t likely know what effect completing an optional objective will have, but go ahead and assume that it’ll change the game in some way (or at least open up some new options), so you might as well burn a few calories and get it done. Later, optional objectives will earn you some (unannounced) extra cash for completing jobs and gigs.

Everything we know about Cyberpunk 2077