Share All sharing options for: Dark Souls 3: Ashes of Ariandel walkthrough 3. Depths of the Painting bonfire

Dark Souls 3: Ashes of Ariandel's Depths of the Painting bonfire is your base of operations for a hidden area in the downloadable content. Here, you'll find items, a new spell and an optional boss fight.

If you're rather stick to the critical path, head to the Corvian Settlement bonfire. 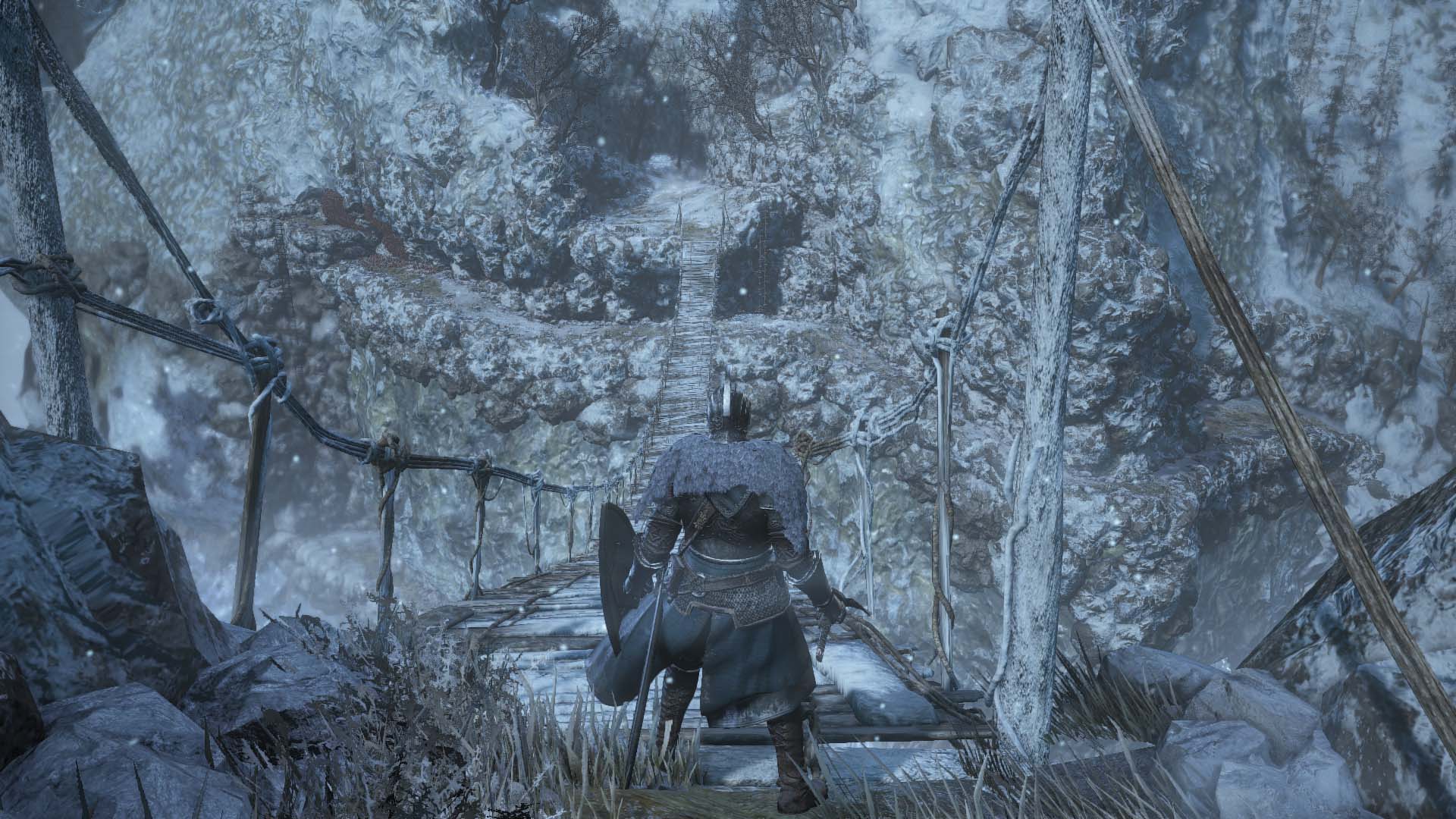 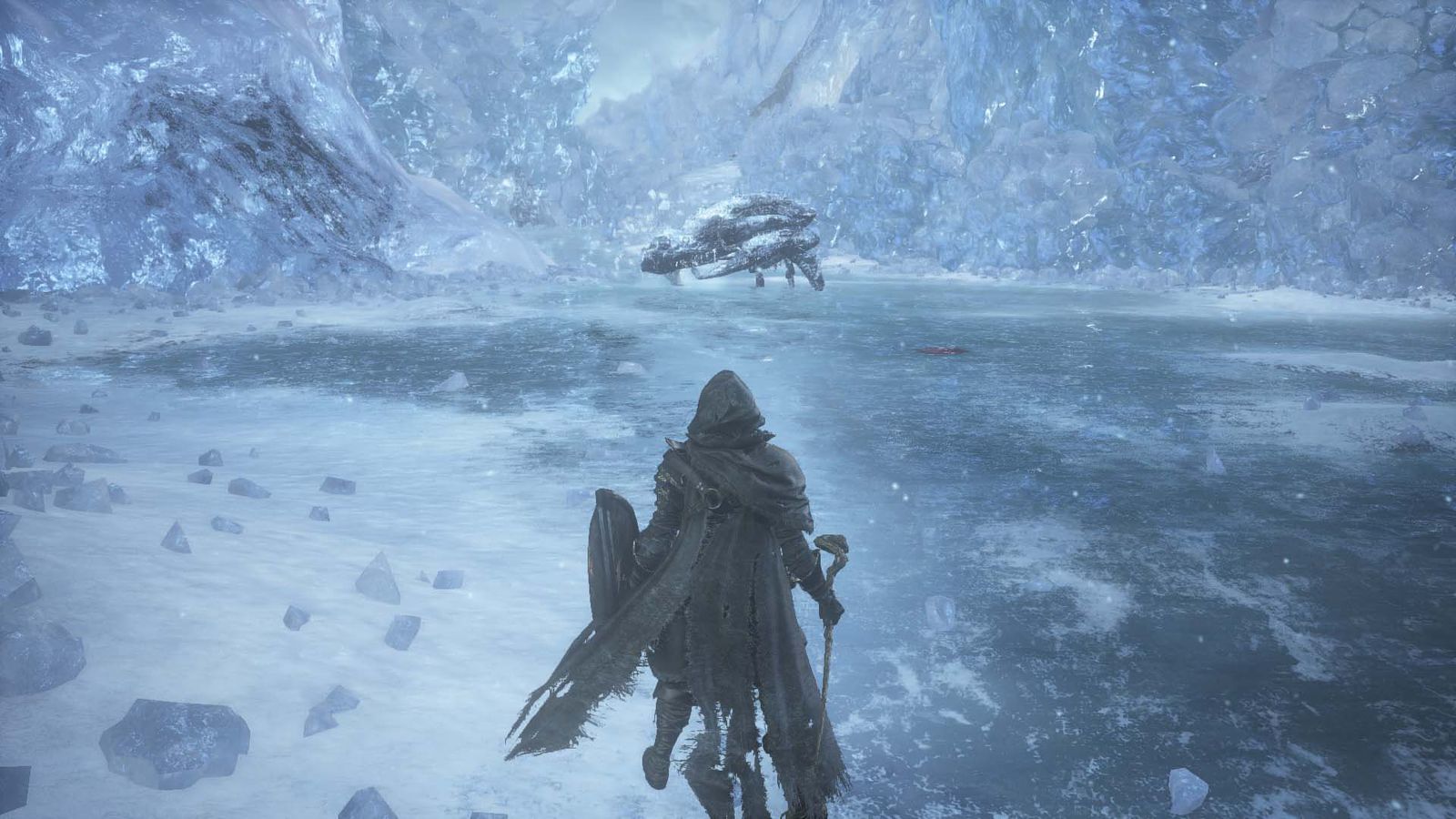 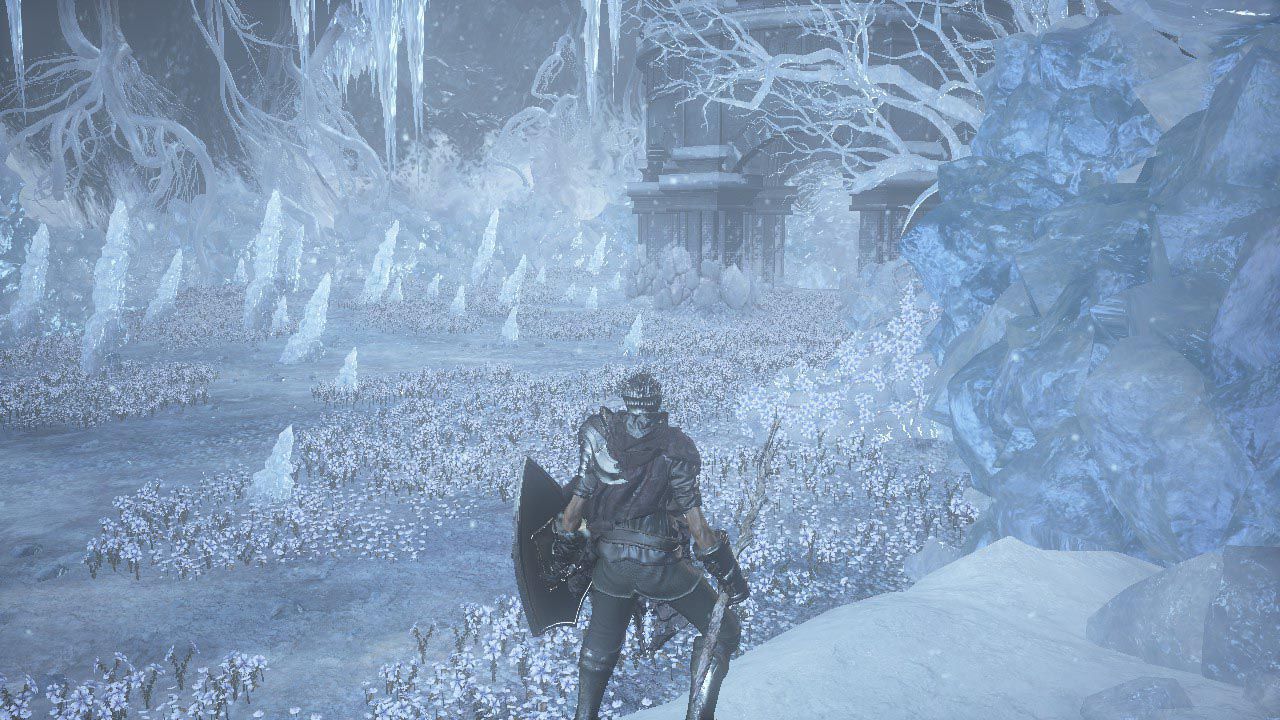 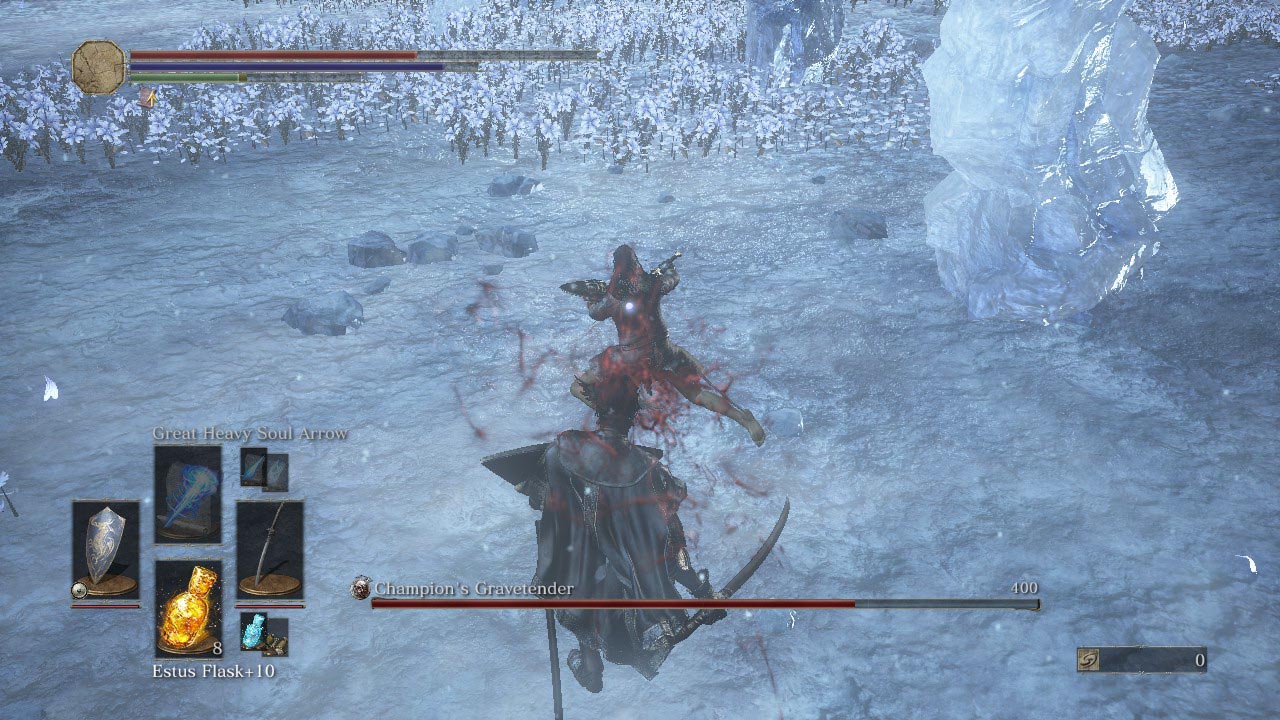 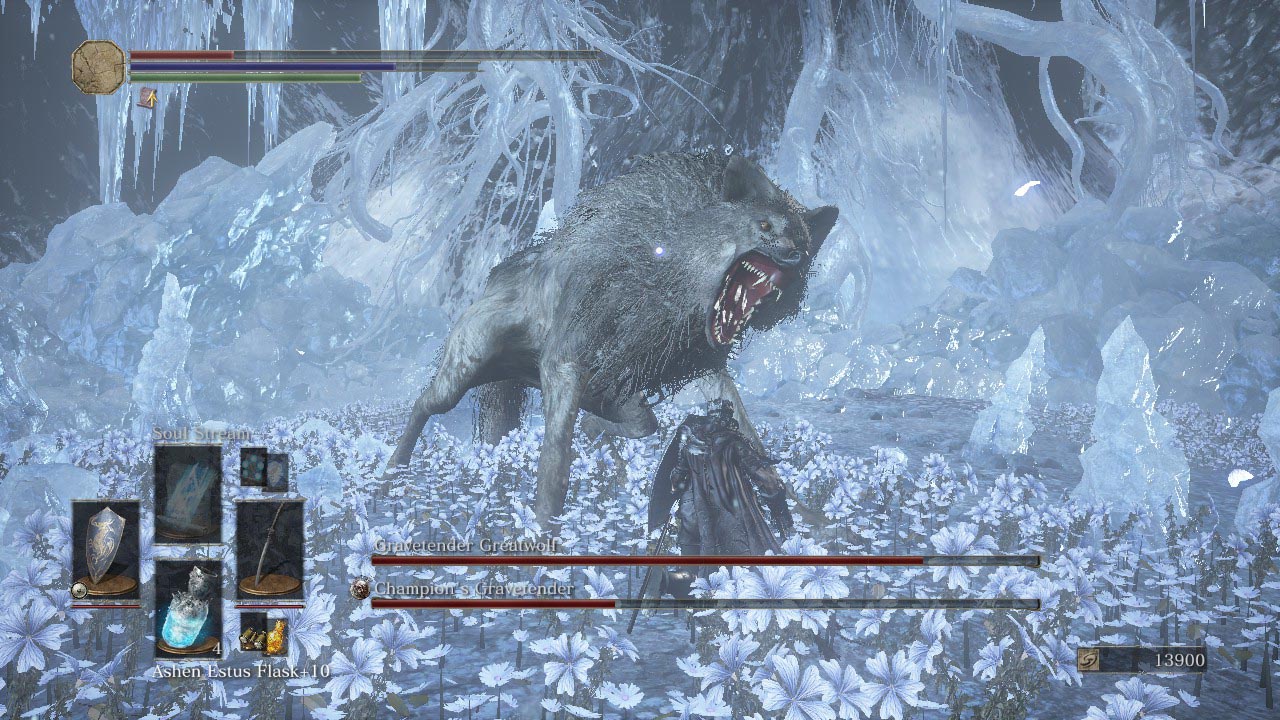 Your goal is to get to the chapel side of the Rope Bridge — you can get there from either the Rope Bridge Cave or Ariandel Chapel bonfires. Attack the bridge a couple times and it will collapse, creating a ladder down — just like in the Catacombs of Carthus. Take the ladder down and follow the path to the left. 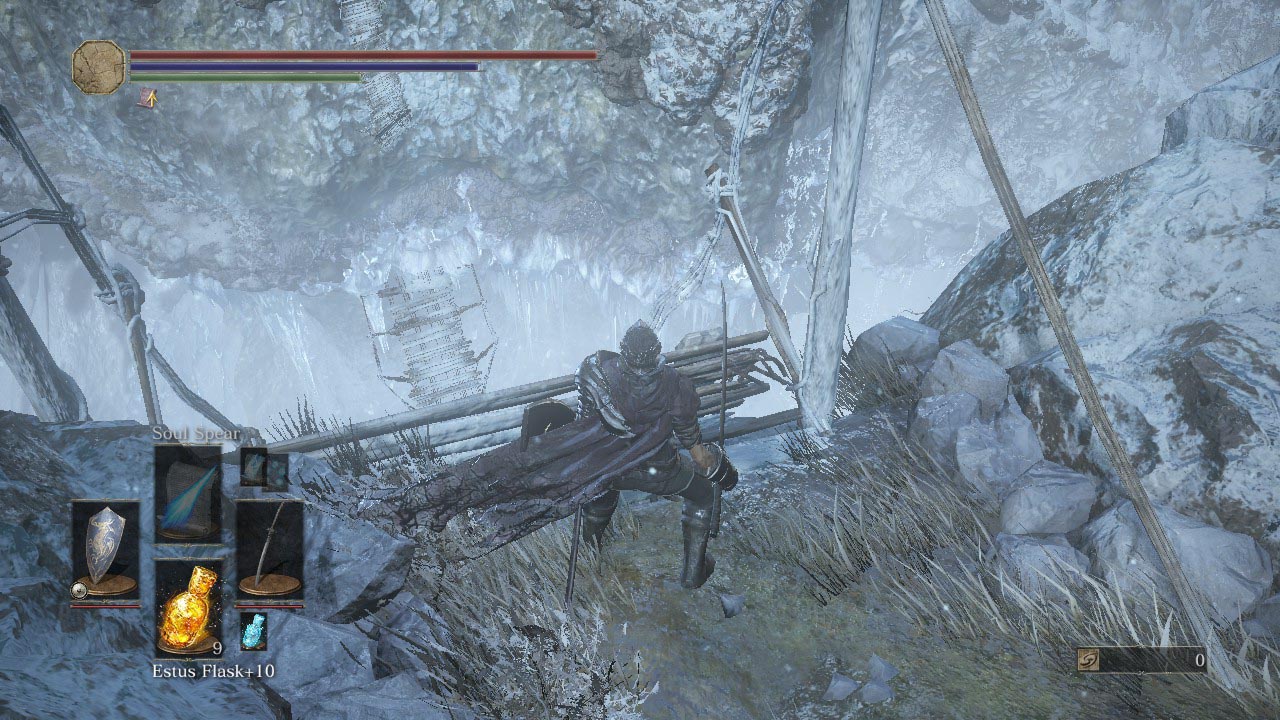 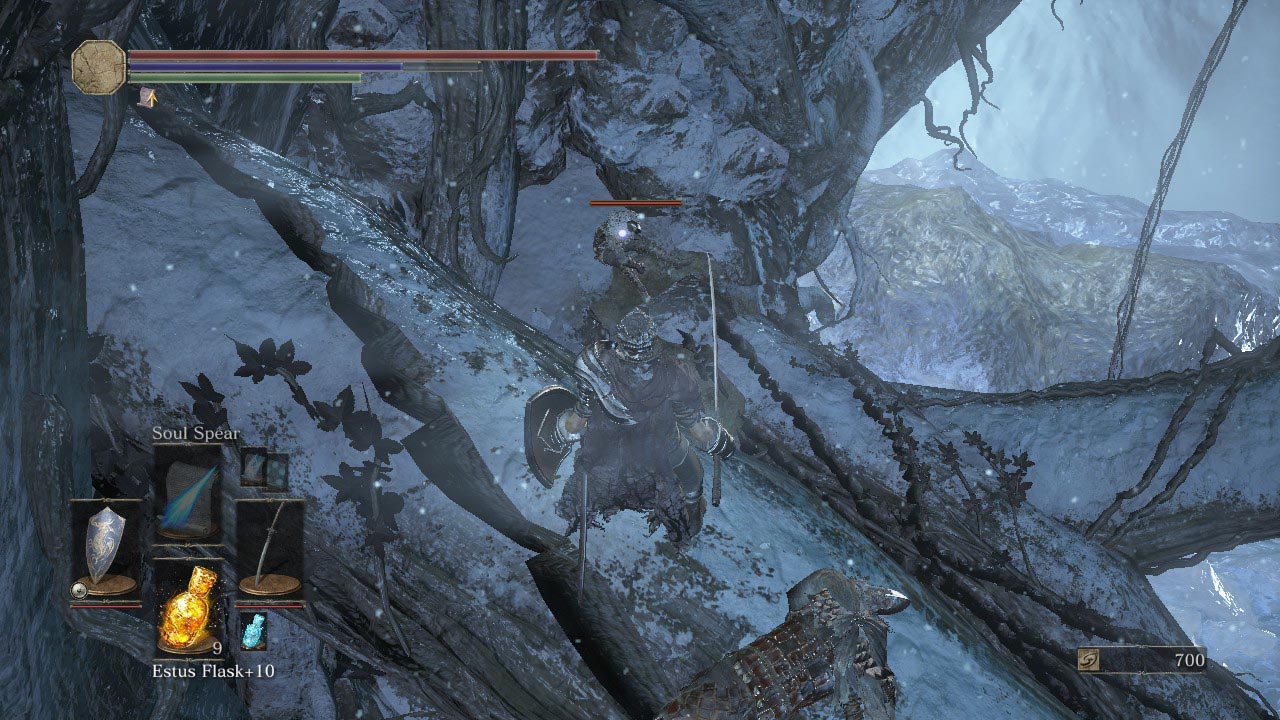 You'll enter another series of ledges, roots and branches. There are a couple Followers waiting for you against the cliff wall. Take them out from a distance if you can — it's hard to maneuver here without falling to your death. 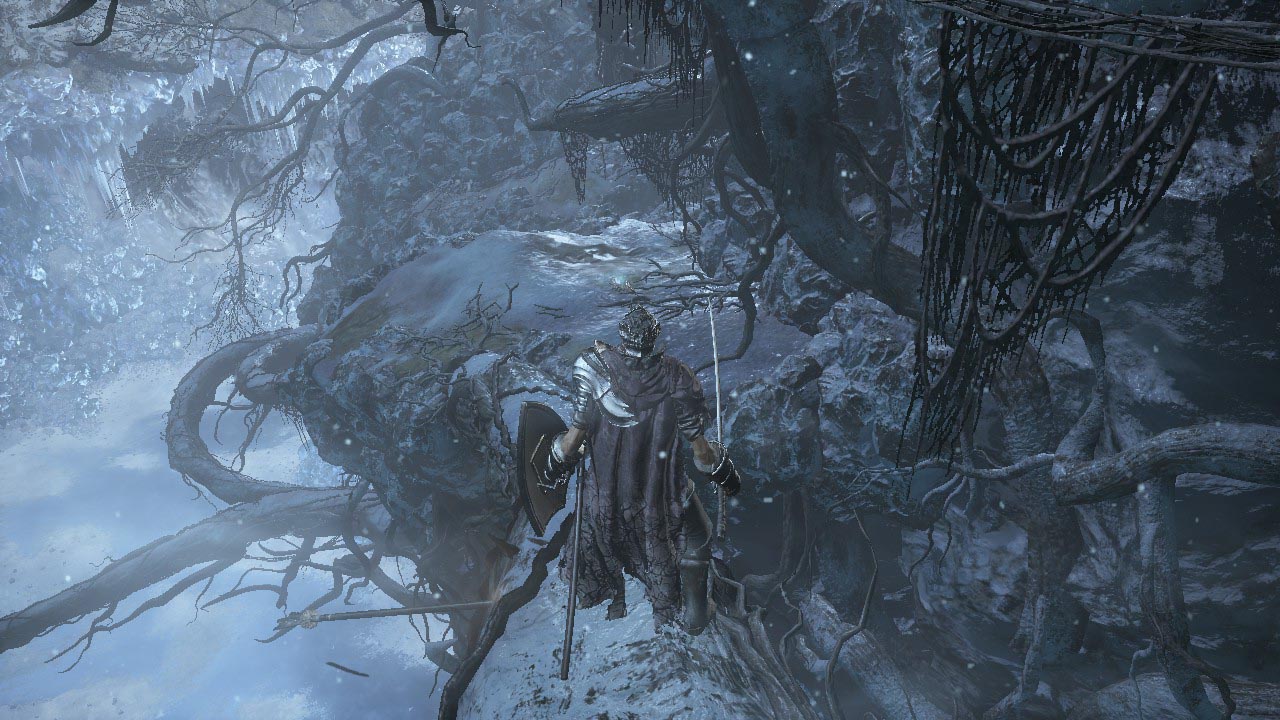 Keep working your way down along the roots — look for the ones that look wide enough to walk on — until you come to a ledge. There's a Crystal Lizard on the ledge that will drop some Twinkling Titanite, but there's also two Followers around the corner and a Millwood Knight archer above you. Attack the Crystal Lizard and then turn your attention to the Follower with the shield and spear. Try to bring the fight back into the corner on the right to avoid the Millwood Knight archer. Get rid of the javelin-throwing Follower next to pick up an Ember. 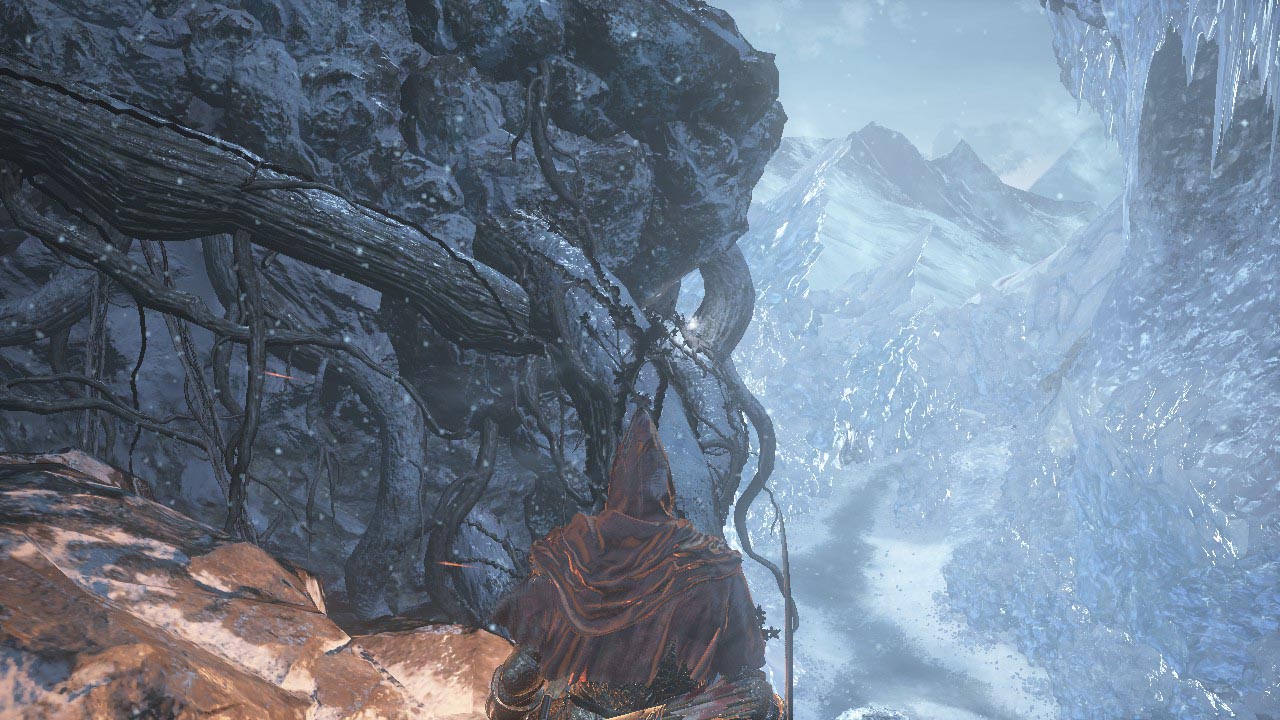 Back across the cliff, past the Millwood Knight archer from where you are, is another weapon to pick up. You can snipe at the Millwood Knight using the branches for cover or lure him down to fight on the cliff. Once he's out of the way, head to the far right of the cliff. You can see the item you're going for from here. Make your way across, drop down one level and work your way back up to the Follower Sabre. 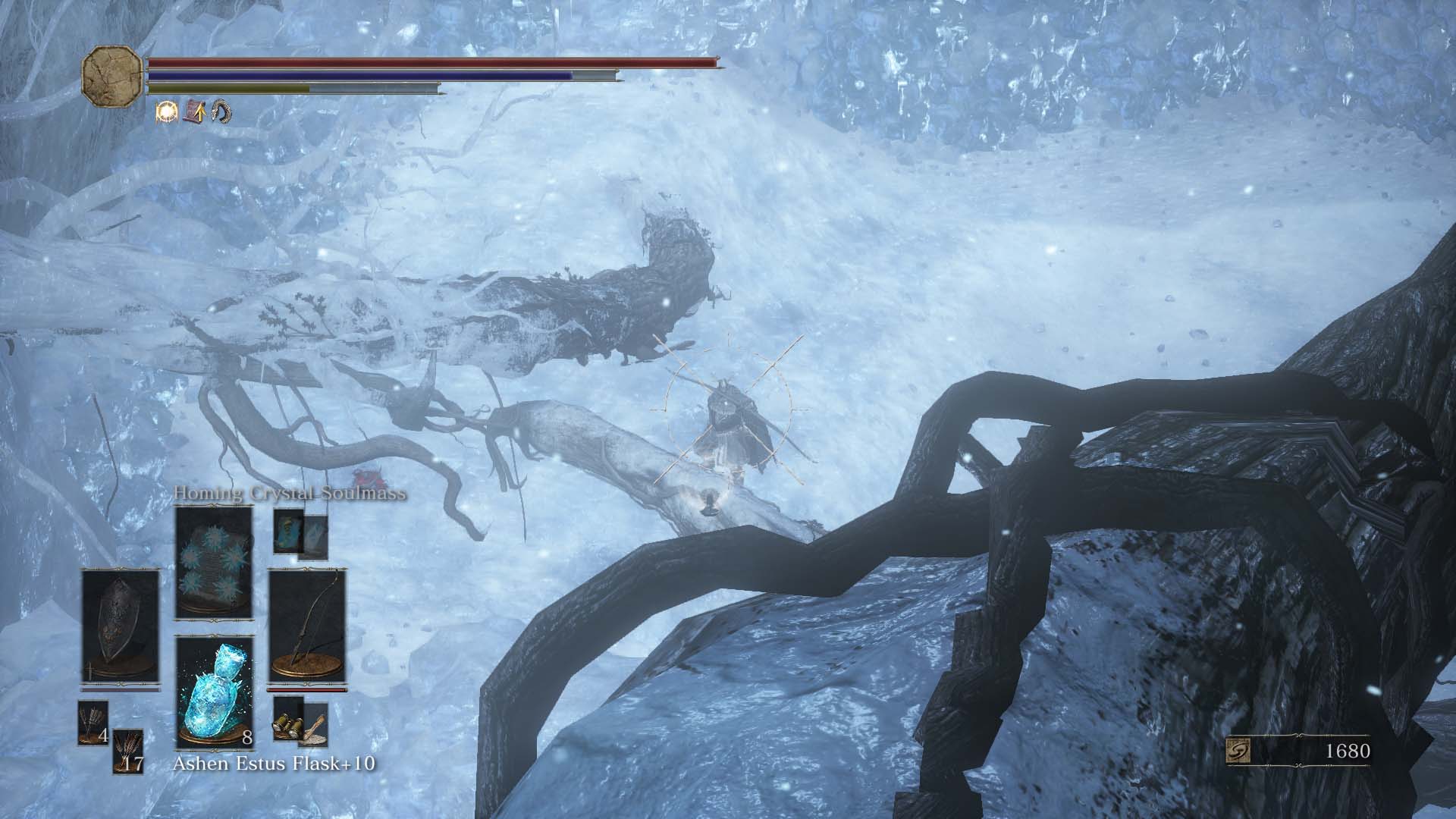 Resume your trip down towards the ground. There's another Millwood Knight archer guarding the end of your trip. If you can deal some damage from a distance, he'll drop his bow and give you a little breathing room while you approach him. Knock him off his perch and drop to the ground. 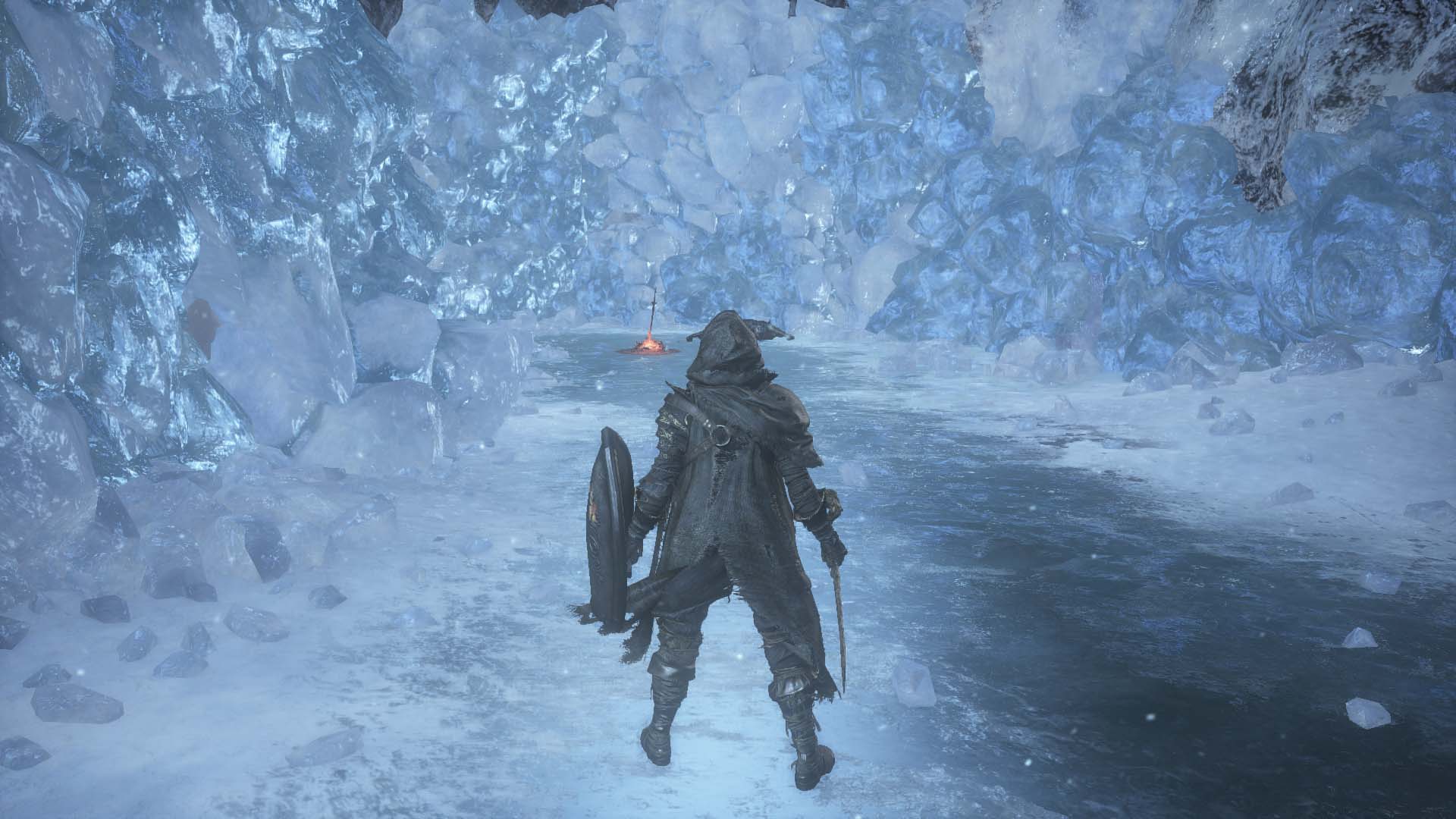 Under where you just came from is an ice cave with the Depths of the Painting bonfire. 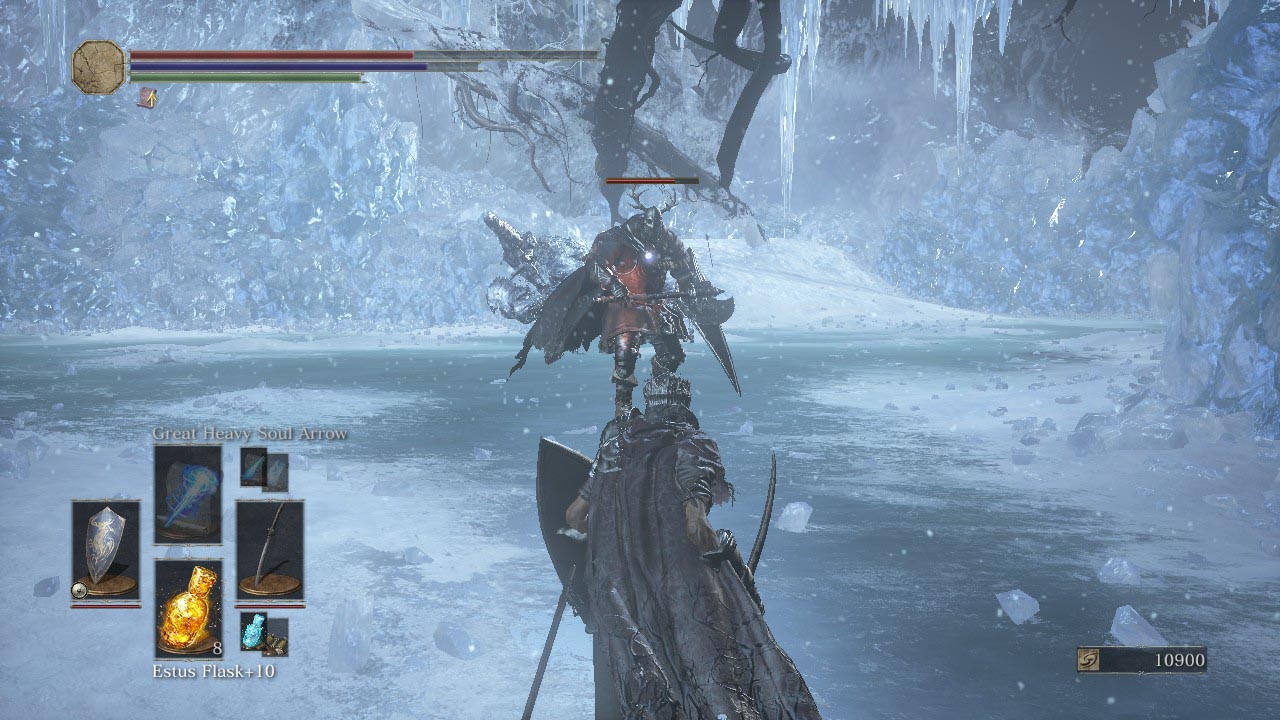 Head straight out of the ice cave and away from the bonfire. Since you'll be running around, it's a good idea to take out the Millwood Knight with the bow and arrow on the branch above you. Lure him down off his branch to make the fight easier. 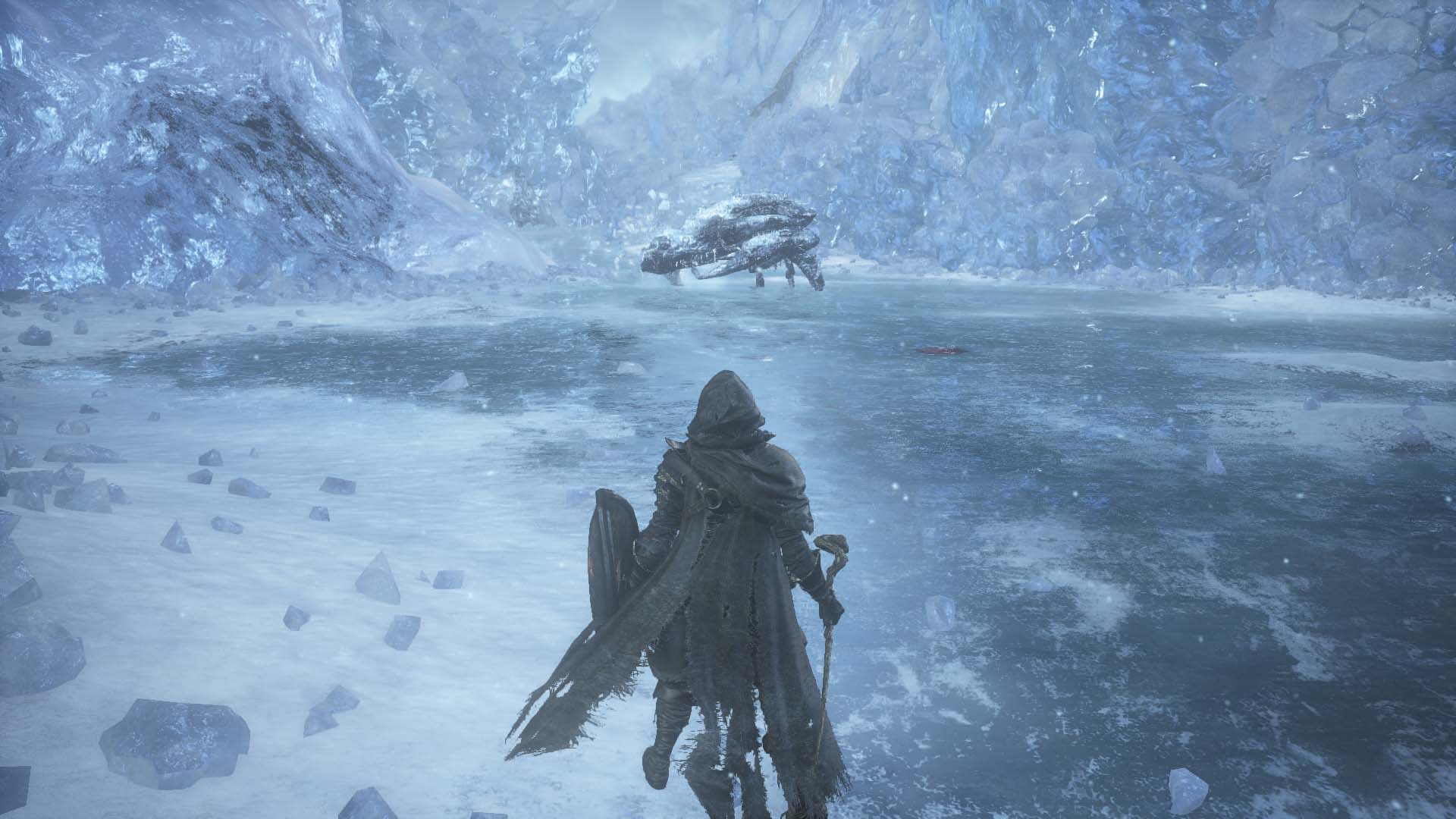 After he's handled, head toward the dozing Giant Ice Crab. When it notices you, its friend will emerge from the ice and join the fight as well.

Handle the crabs the same way you handled the giant crabs in the Road of Sacrifices area — avoid their smashing claw attacks and attack their unarmored front. 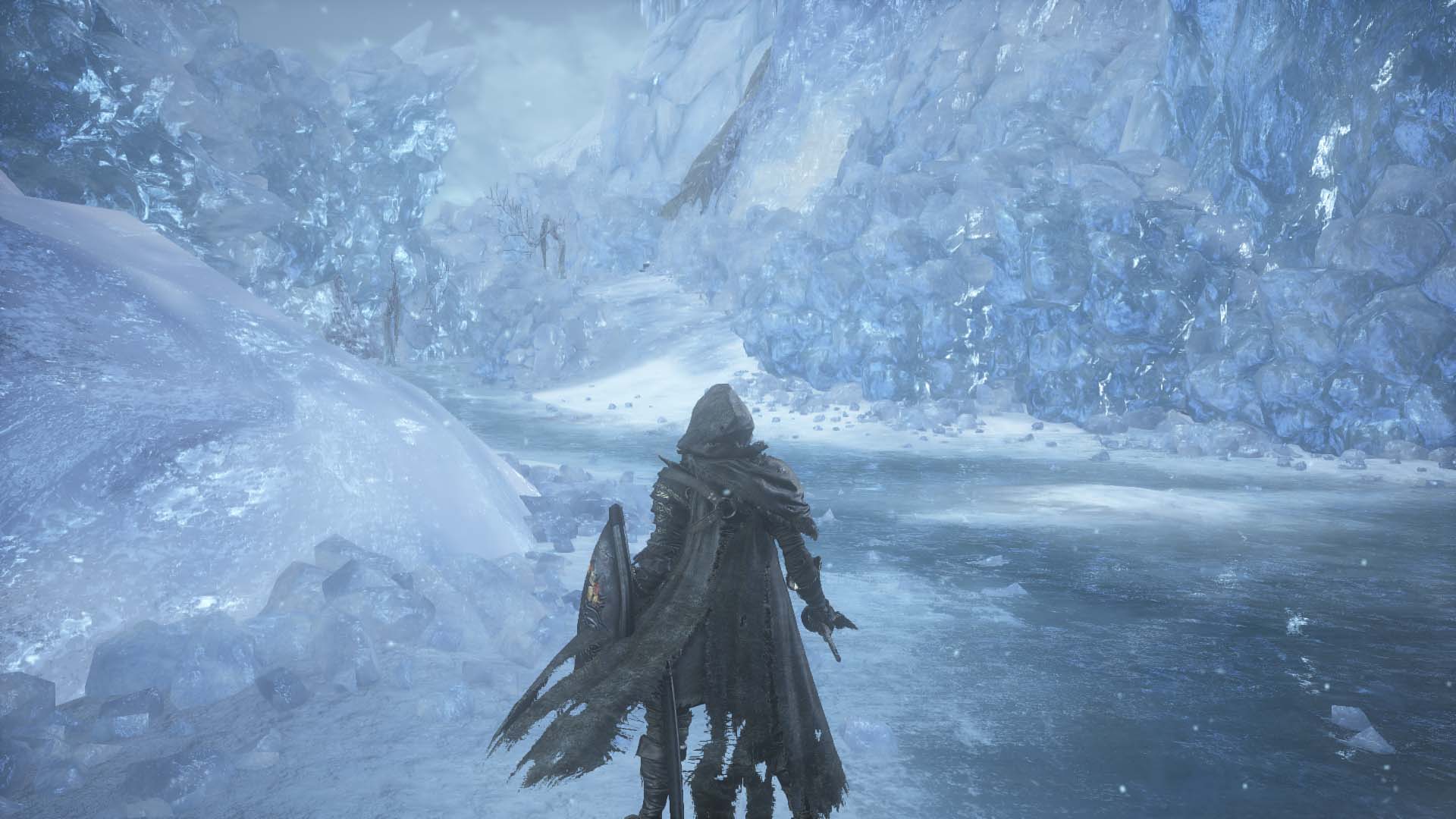 Follow the path that the crab was guarding up a ramp to find Homeward Bones, but be careful: There's a Witchtree at the end of the ramp. From your perch on top of the ramp, look over the side and, if you have ranged weapons, attack the tree women below. If you don't have ranged weapons, walk down the ramp and onto the path leading away from the bonfire, where you can fight.

At the end of the path ahead of you, there's a final Witchtree. Defeat defeat her, and she'll disappear. In her place, you'll find a corpse. Pillage it to find Snap Freeze, which lets you emit "a cloud of near-freezing mist," according to its description.

There's one more thing to find, and you're in the right place. As Polygon reader BlackBoxTheme points out, as soon as you kill the final Witchtree, a ladder will appear on the ramp where you picked up the Homeward Bones.

Retrace your steps, climb a couple of ladders, and you'll find a corpse to pillage for a Titanite Slab. If you continue along the path past the corpse, you'll find a giant bug and the path that leads back to the Rope Bridge Cave bonfire.

Rest up at the bonfire. The boss fight you're about to have is decidedly hand-to-hand-focused (with some frost thrown in for fun), so browse your closet for your best physical protection, with an eye on the frost and poise stats as well. 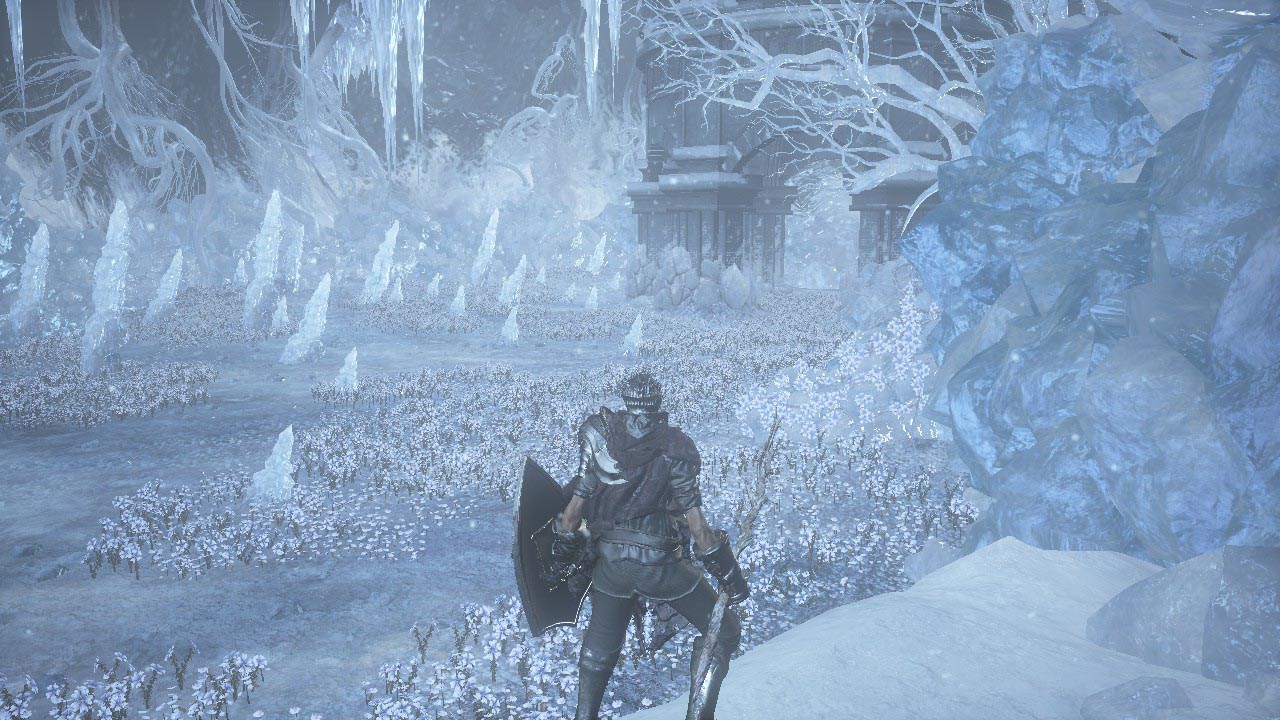 When you're properly dressed, follow the wall around to the right. You'll drop off a ledge into a wide, open field at the base of the tower you explored earlier. 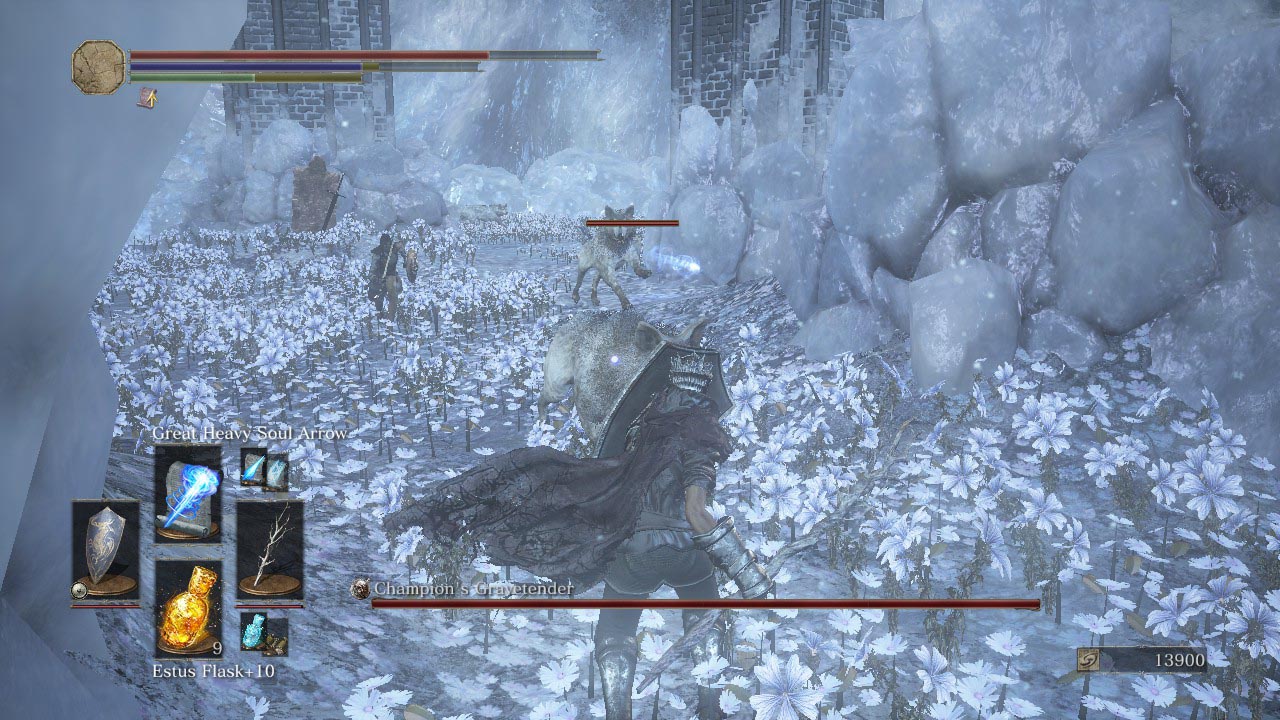 As you pass under the tower, the Champion's Gravetender and her guard wolf will take notice of you and the fight will begin.

Like most boss fights, this one has two stages. Two more wolves (making three in total) join the fight immediately. Take them out quickly while keeping distance between you and the Gravetender. No more help is coming (for a minute at least), so you can focus on her with the wolves taken care of.

The Gravetender is fast, just like most of the enemies you've met in Ariandel, making ranged and spell attacks difficult, but not impossible. Wait for her recovery moments after she jumps or rolls to catch her off-guard. This isn't an easy fight to pull of from a distance, though. If you've equipped, take the fight to her. She has a jumping attack that is both telegraphed and easy to side-step. Use this opening to get behind her for a backstab or a multi-hit combo.

Once you reduce the Champion's Gravetender's health to about half, the second phase of the fight begins. Consistent with Dark Souls 3: Ashes of Ariandel's theme, this means that enemies will gang up on you. So, obviously, the superpowered Gravetender Greatwolf now joins the fight.

You don't have to defeat them in any order, so ignore the Gravetender Greatwolf and keep pressing the fight with the Champion's Gravetender.

The Gravetender Greatwolf has a freight train-like attack that covers a lot of distance (and deals a lot of damage), so keep moving. Just use the same tactics you have been against the Gravetender until she's out of your way, then turn your attention to the wolf.

The Gravetender Greatwolf doesn't have any surprises other than the freight train impression. Get out of its way when you have to, but generally treat it like the other wolves and greatwolves you've fought here. 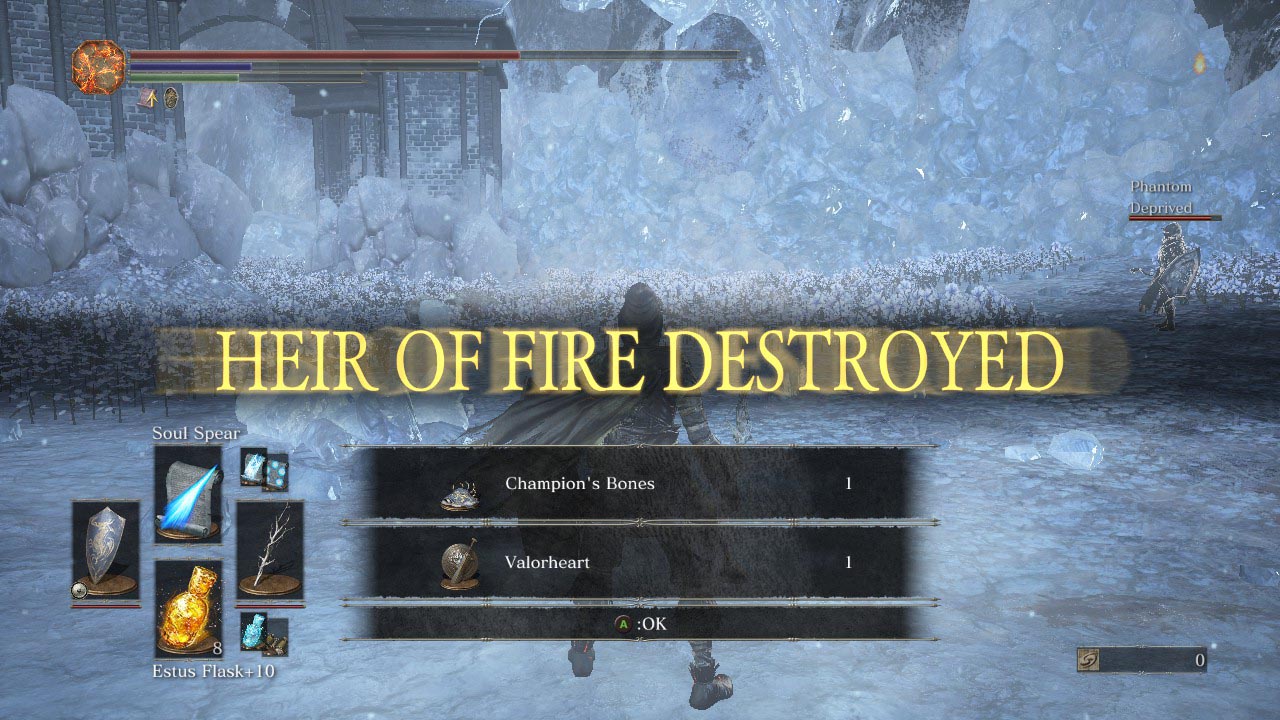 After the fight, you'll receive the Champion's Bones and the Valorheart sword and shield combo that the Gravetender used. 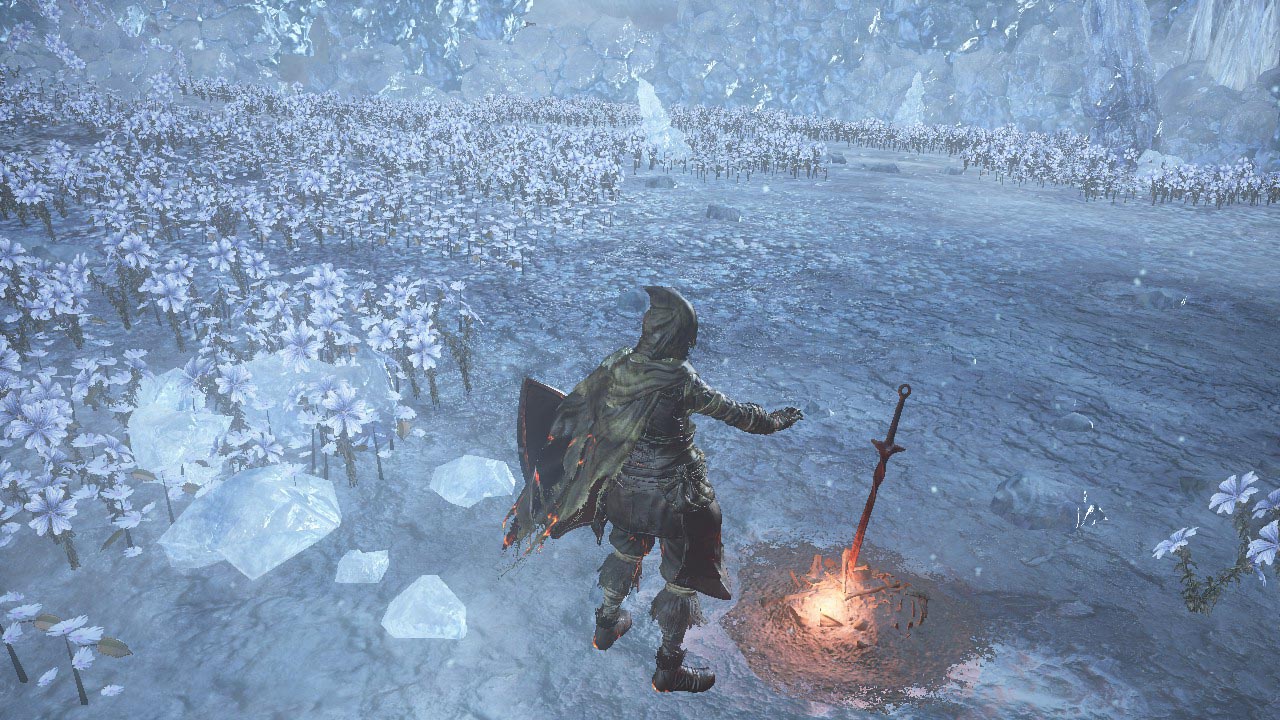 There's a bonfire in the field on the far side of the tower. Light it up and warp to continue your journey.