This is it: The end of Dark Souls 3: Ashes of Ariandel. Beyond the Snowy Mountain Pass bonfire, the path that you opened with the wheel in the basement opens right behind Lady Friede in Ariandel Chapel. Travel to the bonfire there to have direct access. 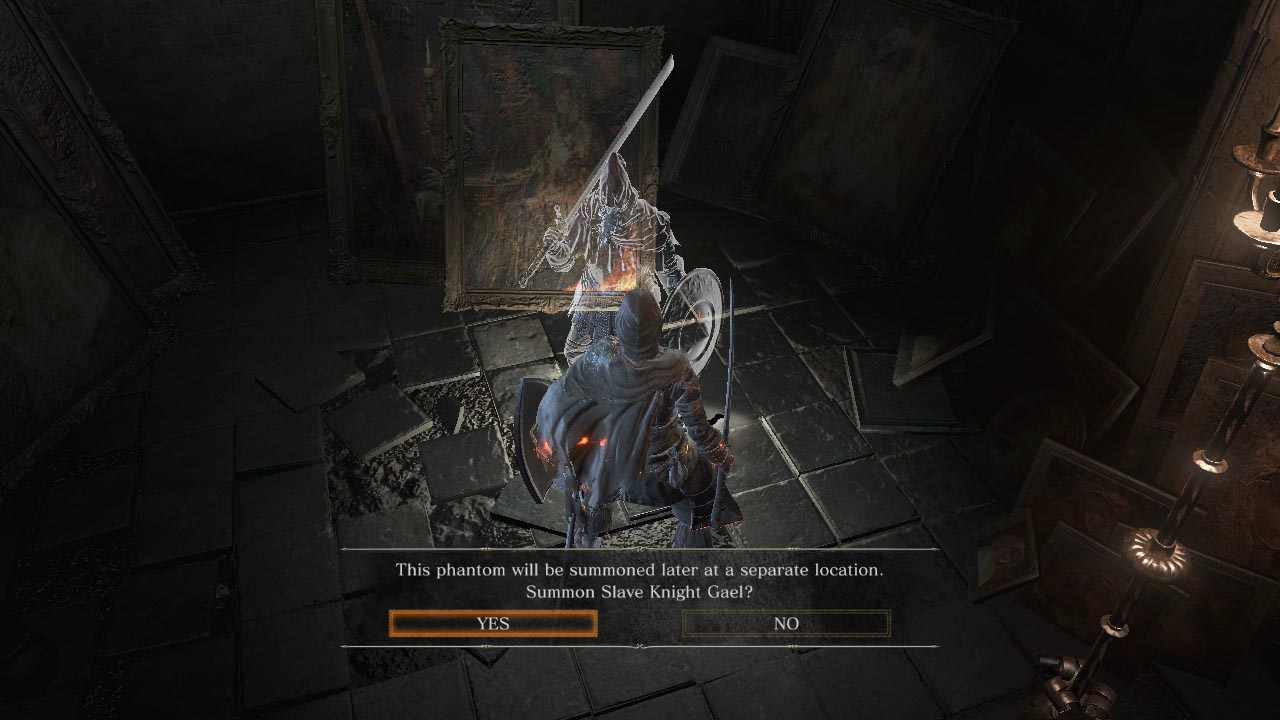 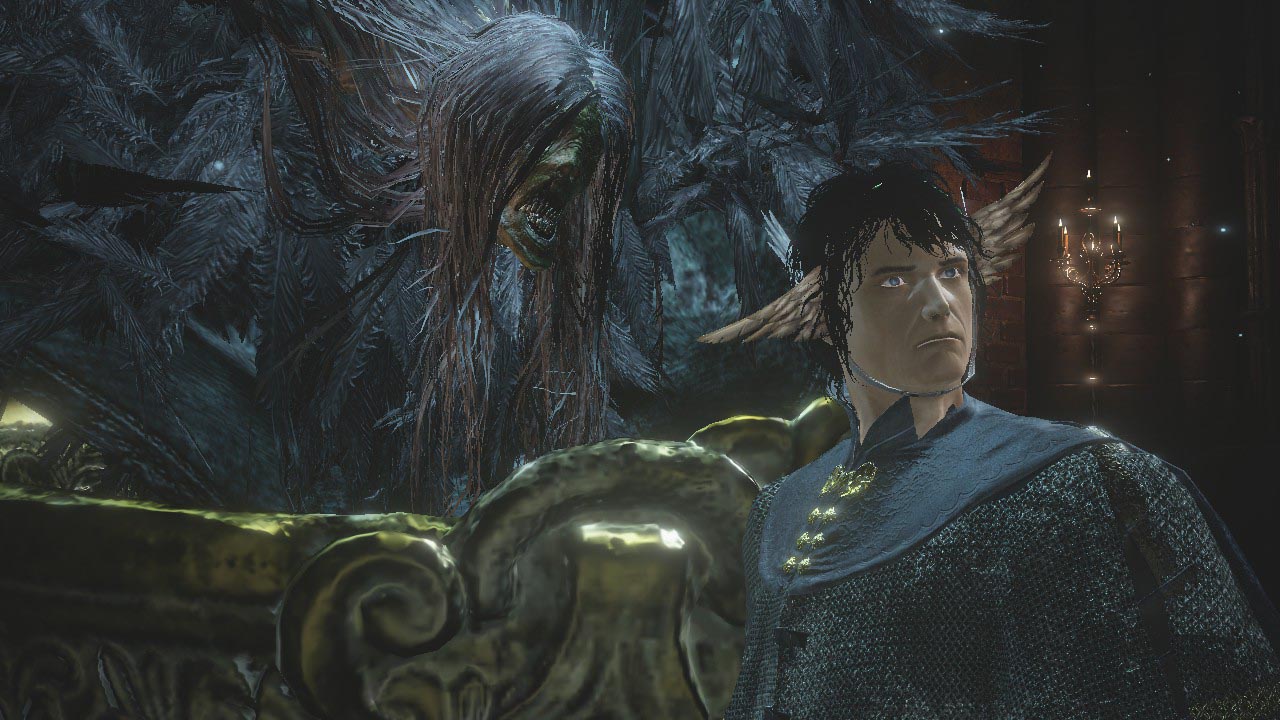 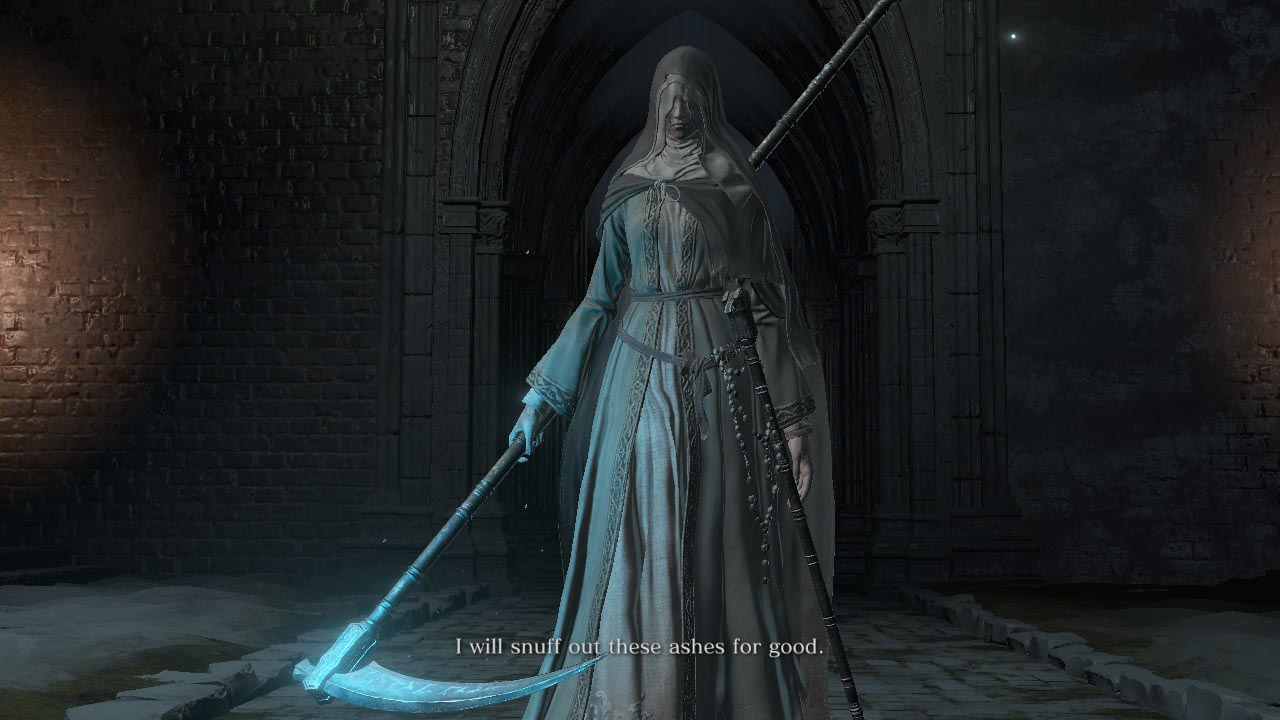 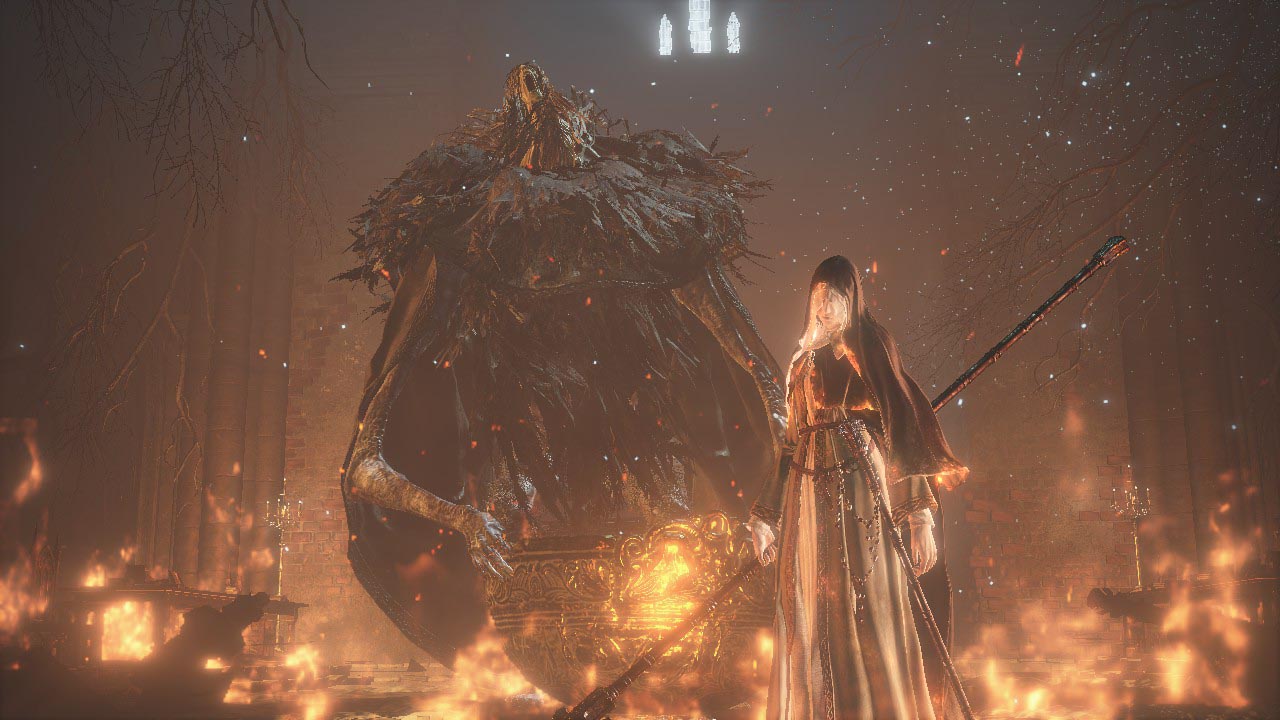 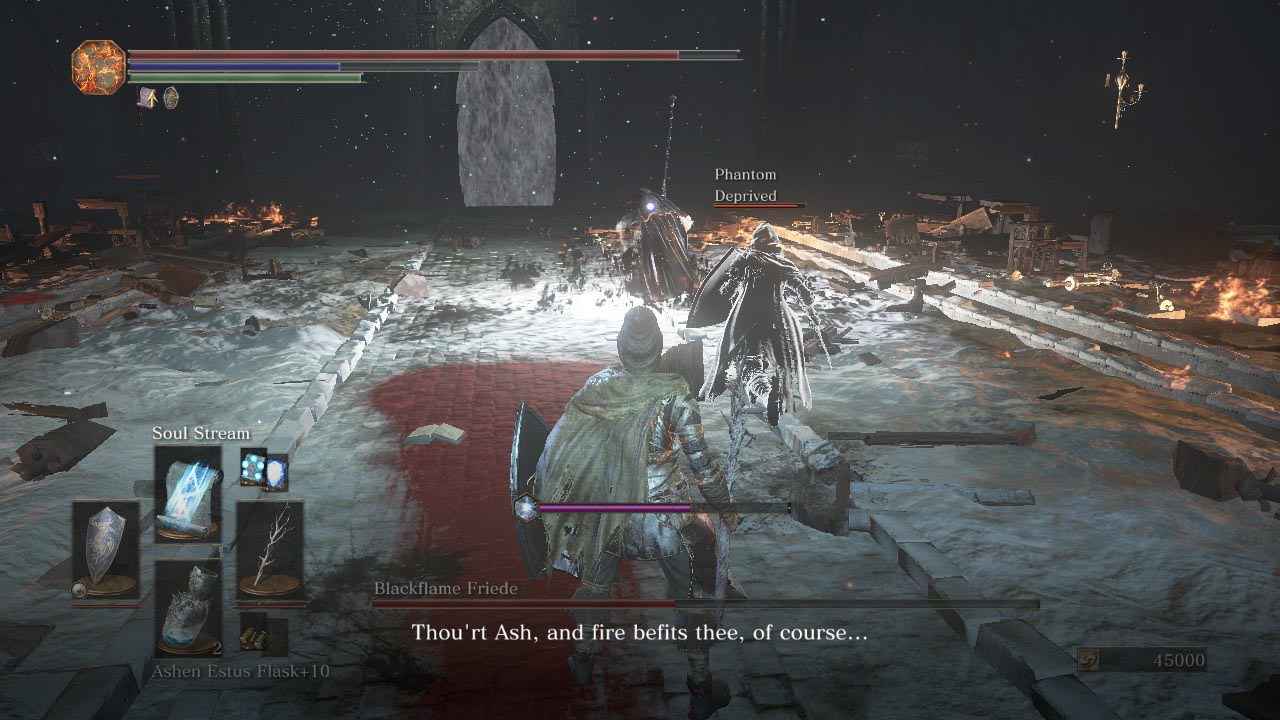 Dress for fire and dark, hit with fire

This is a big fight. Take a moment to dress appropriately. Mix and match Frost and Fire protection in your outfit. (Remember the first time you met Lady Friede? She gave you the Chillbite Ring. Now would be a great time to equip it.)

If you've got them, Charcoal Pine Bundles and Resins will come in handy in the coming fight as well. Or, you know, if you have a weapon with fire damage built in, try that.

Almost every fight you engage in during your journey through the Painted World of Ariandel involves your enemies ganging up on you. For the boss fights — both here and in Depths of the Painting — it's a good idea to do the same. Having at least one ally means that you can turn the tables on solo enemies or divide and conquer when there's more than one.

To the left of the stairs down, you'll find a summon sign for the old man that brought you here in the first place, Slave Knight Gael. He won't show up right away, but he'll join the fight when he's ready.

Head down the stairs when you're ready and have a quick conversation with Father Ariandel.

But what's this!? Turns out Lady Friede hasn't been completely honest with you. She's also done messing around, apparently.

Ranged attacks work well here if you wait for your opening — just like everyone else in Ariandel, she's got the annoying habit of stepping out of the way of spells. Lady Friede's three-swing attacks with her scythe are deadly, but slow. Use the time to get some distance between you. 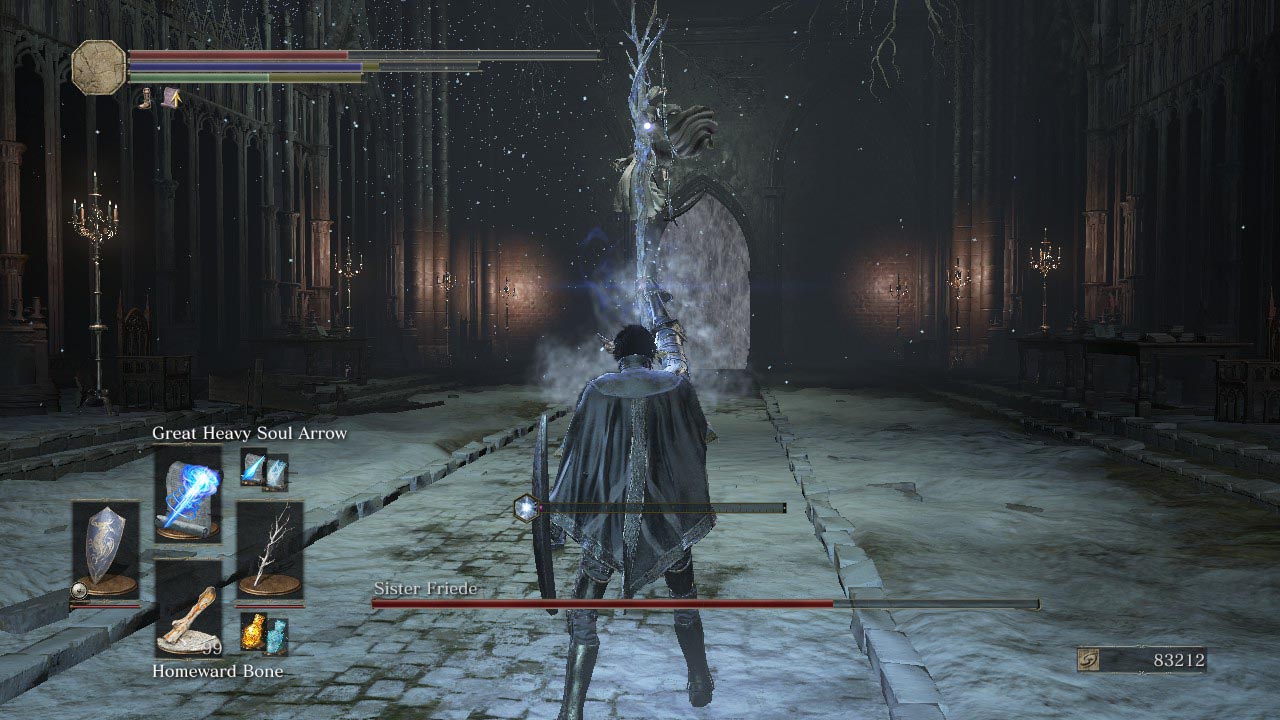 Keep her off-balance to prevent a jumping attack, but even if she manages one, you'll have plenty of time to get out of the way. If you prefer melee, we recommend adding fire to your attack with the Charcoal Pine items. 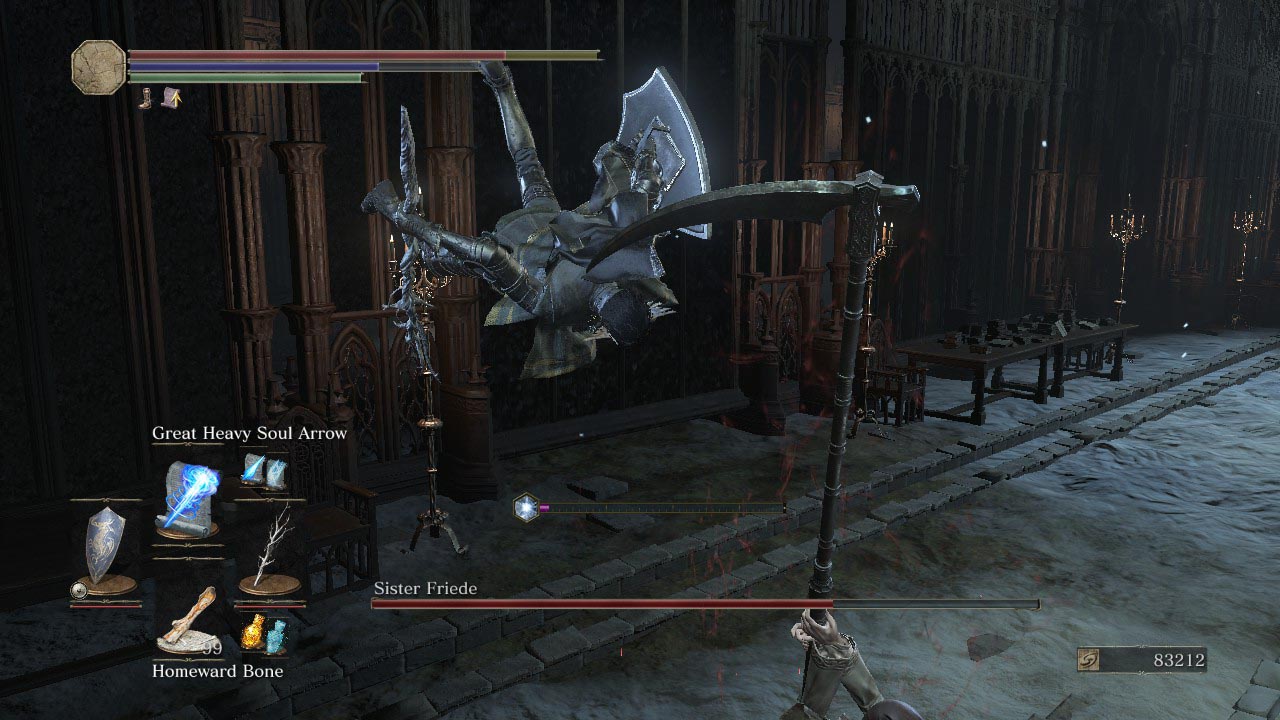 Her biggest surprise is that she'll occasionally become invisible and fly around the room. If you let your guard down, she'll reappear behind you with her scythe and attack. The trick to avoiding her is to listen. She makes noise while invisible, specifically the sound of her scythe scratching along the floor and sometimes a laugh. Right after this starts, start rolling. She'll reappear shortly and you can resume the fight.

Once you've defeated Lady Friede, the fight enters its second phase, Lady Friede gets her second wind, and Father Ariandel joins the fight. They share a health meter, so you can pick which one you'd like to fight and focus on them throughout the fight.

As always, the choice is yours, but consider targeting Father Ariandel and ignoring Lady Friede. His attacks are brutal, but they're also easy to avoid. Lock on, stick to his back (because that's where he's most vulnerable, and he has no backward attack) and fire away. Lady Friede, on the other hand, is way more complicated and has far more attacks. 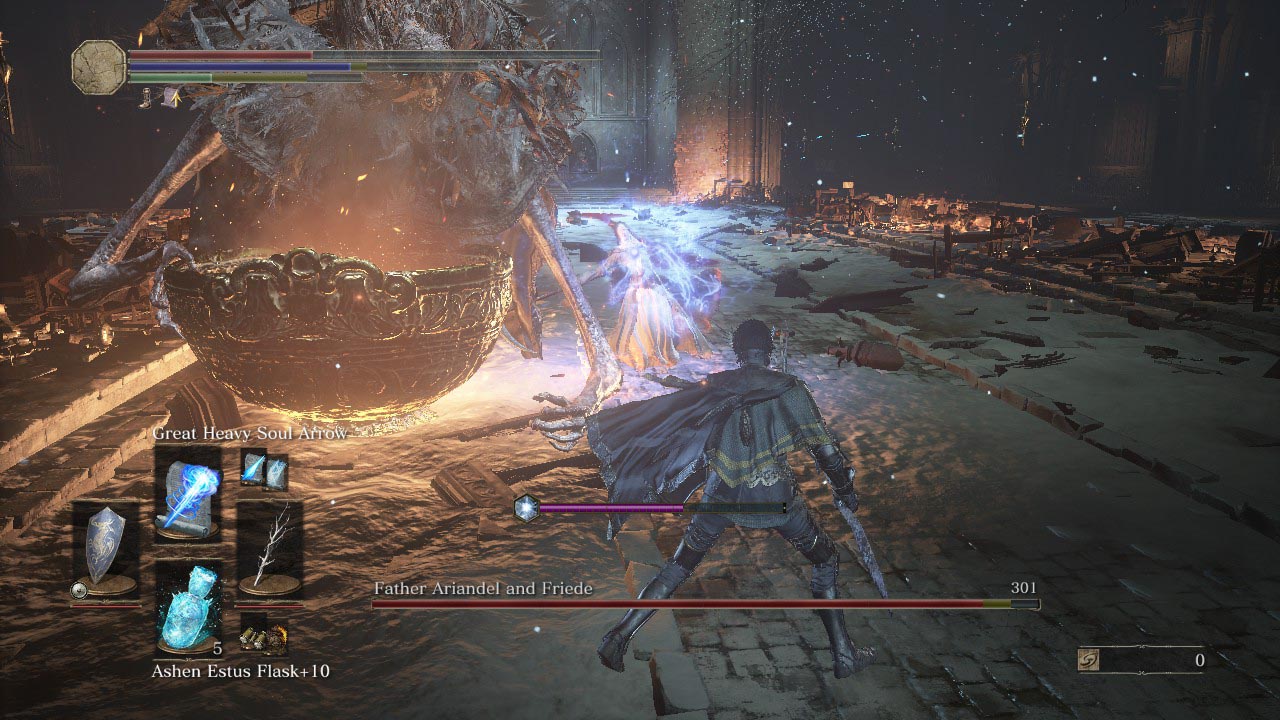 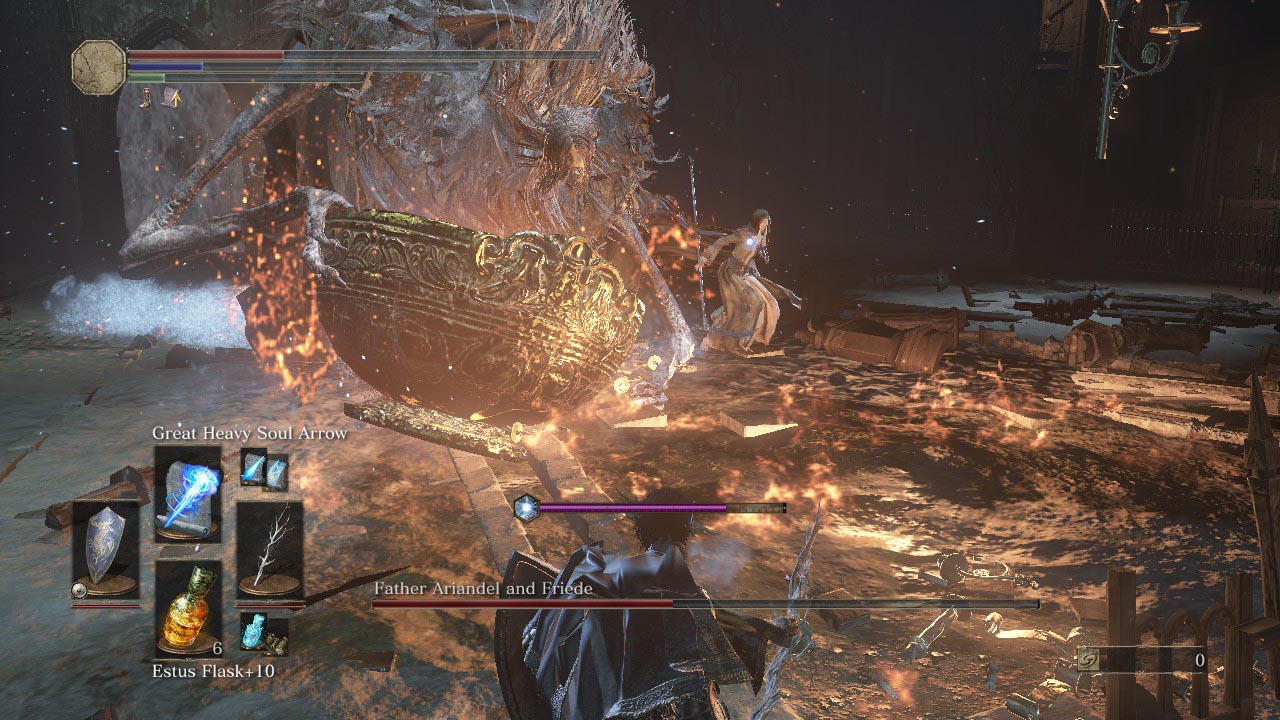 Father Friede has a fire-breathing area attack and will charge you, smashing his cauldron on the ground as he goes. These are a bit easier to avoid than the Lady's scythe and frostbite attacks, so we recommend focusing on her as much as you can.

After they're defeated, the fight enters a third phase. Lady Friede gets her third wind and adds Dark attacks to her repertoire, but the tactics remain largely the same.

Defeat her this third and final time to receive a Titanite Slab and the Soul of Sister Friede.