How to get the best SMG in the game, and an excellent scout rifle to boot

Our Destiny 2 guide explains everything you need to know, including choosing a class, a guide to Exotic armor, emotes, weapons, sparrows and ships, how to trigger Heroic Public Events and much more.

Every multiplayer game has its one-two punch. For Gears of War, it’s a melee strike and a shotgun blast to the face. Get the timing right, and it’s curtains for your enemy.

Things are a little more complex in Destiny 2, but the overall strategy is the same. The one-two combo this time is the MIDA Mini-Tool and the MIDA Multi-Tool. Here’s how to get both with the least amount of effort. In my estimation, it’s the best postgame upgrade you can make, and will instantly make you a force to be reckoned with in the Crucible and in open-world events.

First things first, finish the main campaign and reach level 20. Then head to the European Dead Zone (EDZ) on Earth and look up gentleman sniper Devrim Kay. Do what he says. Fulfill every quest, and he will reward you with the MIDA Mini-Tool, a Legendary (purple) submachine gun.

I’ve used a lot of SMGs so far, and there’s almost nothing in the game right now that puts more rounds down range with less recoil than the MIDA Mini-Tool. And it’s not an exotic, which is actually an advantage. You can always have it slotted when you need it, ready to push back a clutch of Fallen or a horde of ravaging Thralls.

Sight, Shoot, Repeat and The Fall Will Kill You

Now head over to the Traveler and see the Gunsmith, Banshee-44. He’ll set you up with the Sight, Shoot, Repeat quest. To fulfill it, you’ll need to take your new toy on a victory lap. First take out 50 enemies with precision shots using a scout rifle, and then take out 25 groups of enemies without reloading.

I had some technical issues with the second part of this quest. As written, it seems to indicate that two kills before a reload will fulfill the requirement, but it could just as easily require three. Either way, it seemed like when I was running it that the required multi-kills weren’t giving the right feedback. I spent a good hour, maybe more, doing loops on Titan shooting Vex in their shiny tummies before I got it taken care of. 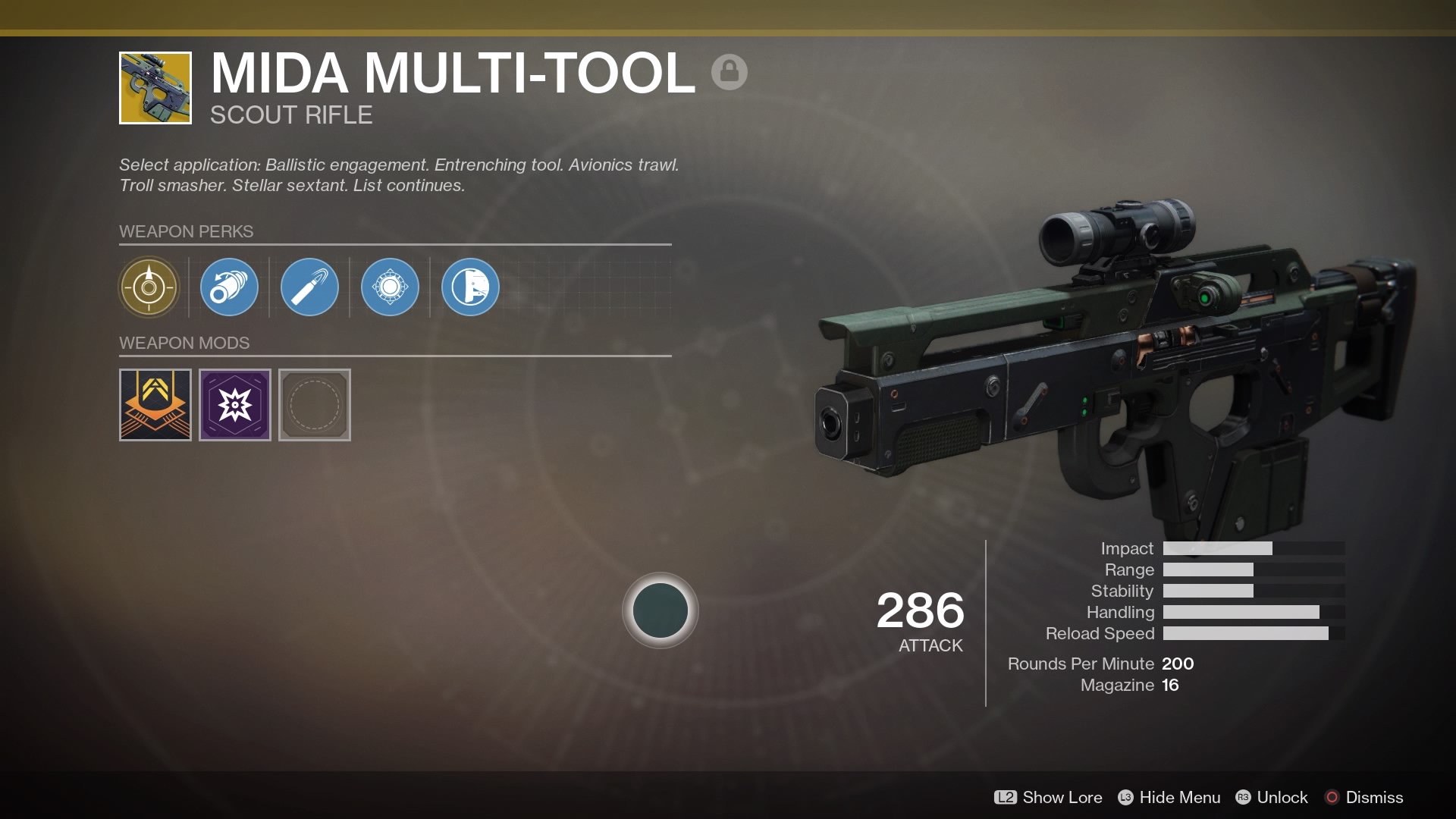 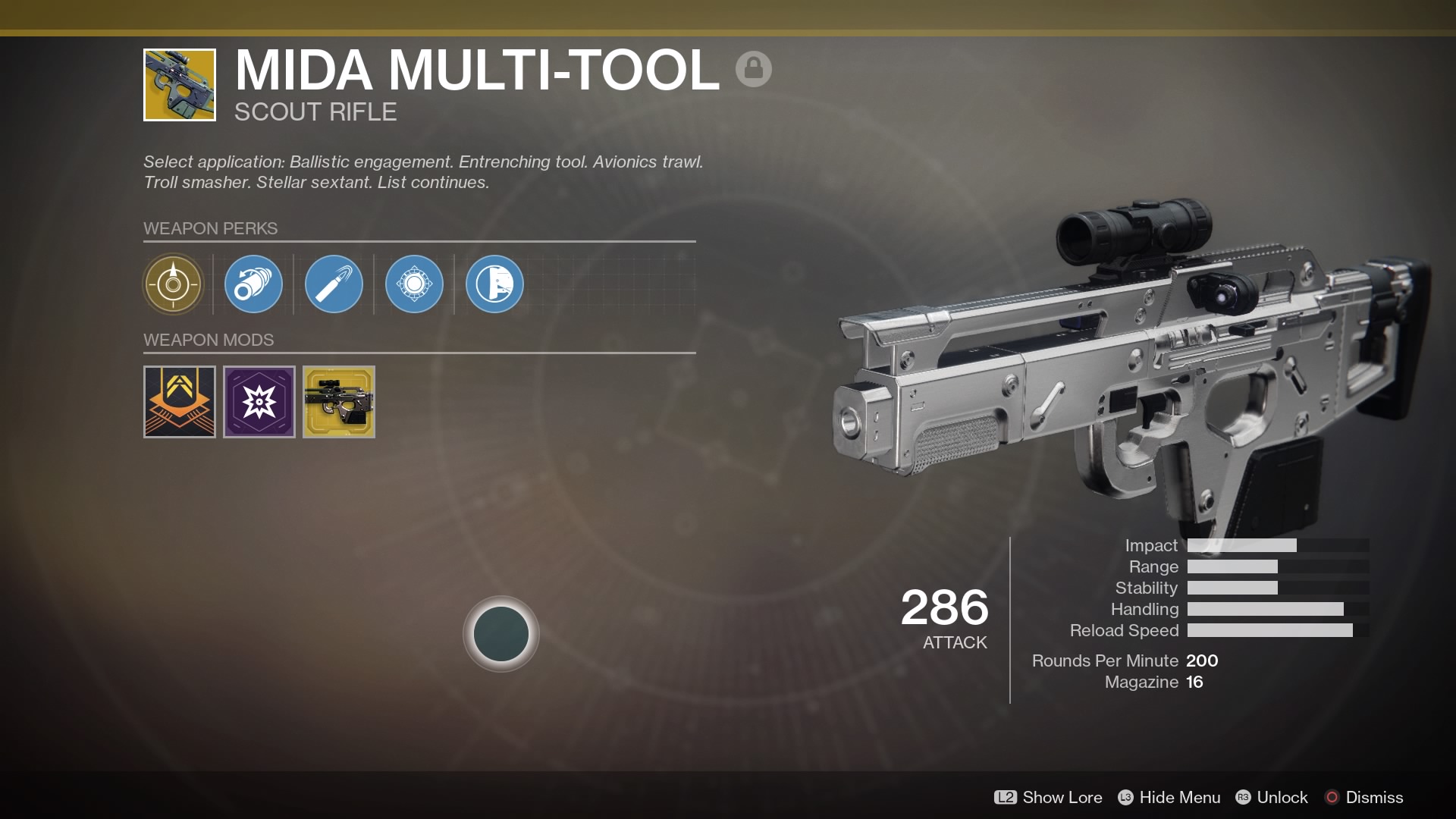 Next, you’ll need to dismantle five Rare (blue) or Legendary (purple) scout rifles. If you can, stock up ahead of time and store your extras in the vault. Infusing doesn’t count.

Next, return to Banshee-44 to get the next quest, which is called The Fall Will Kill You. Equip the MIDA Mini-Tool (or your SMG of choice) and kill 50 enemies while airborne.

Return the Banshee-44 and take possession of your new toy, the MIDA Multi-Tool. There are better scout rifles in the game, but not many.

Everything you need to know about Bungie’s new game
Guide