Get inside the facility

This is the first mission where you won't be dropped into a decaying cityscape. You're in the snowy mountains. Make your way to the waypoint to get started. Hack the door and walk inside. Oh, wait! Viktor kicks in the door and hits you with a jump scare. This triggers a cutscene as Jensen is drugged and dragged into the facility.

You have the option to contact Vega or Miller once you come to. Viktor's men think they killed you, but you're alive and you still have all of your gear, so that's convenient. Climb the snowy bluffs until you reach the door marked by the waypoint.

Head down the hallway. Watch out for the camera on the wall. Duck under its vision cone to reach the door on the other side. There's a control panel on the left side of the room when you come in. Activate it, and move the crane to the left. Someone will get on the intercom and yell at you for moving it. Choose the Omega dialog choice to calm him down. You can use the drill to unlock a trophy or achievement, but it doesn't do much else. 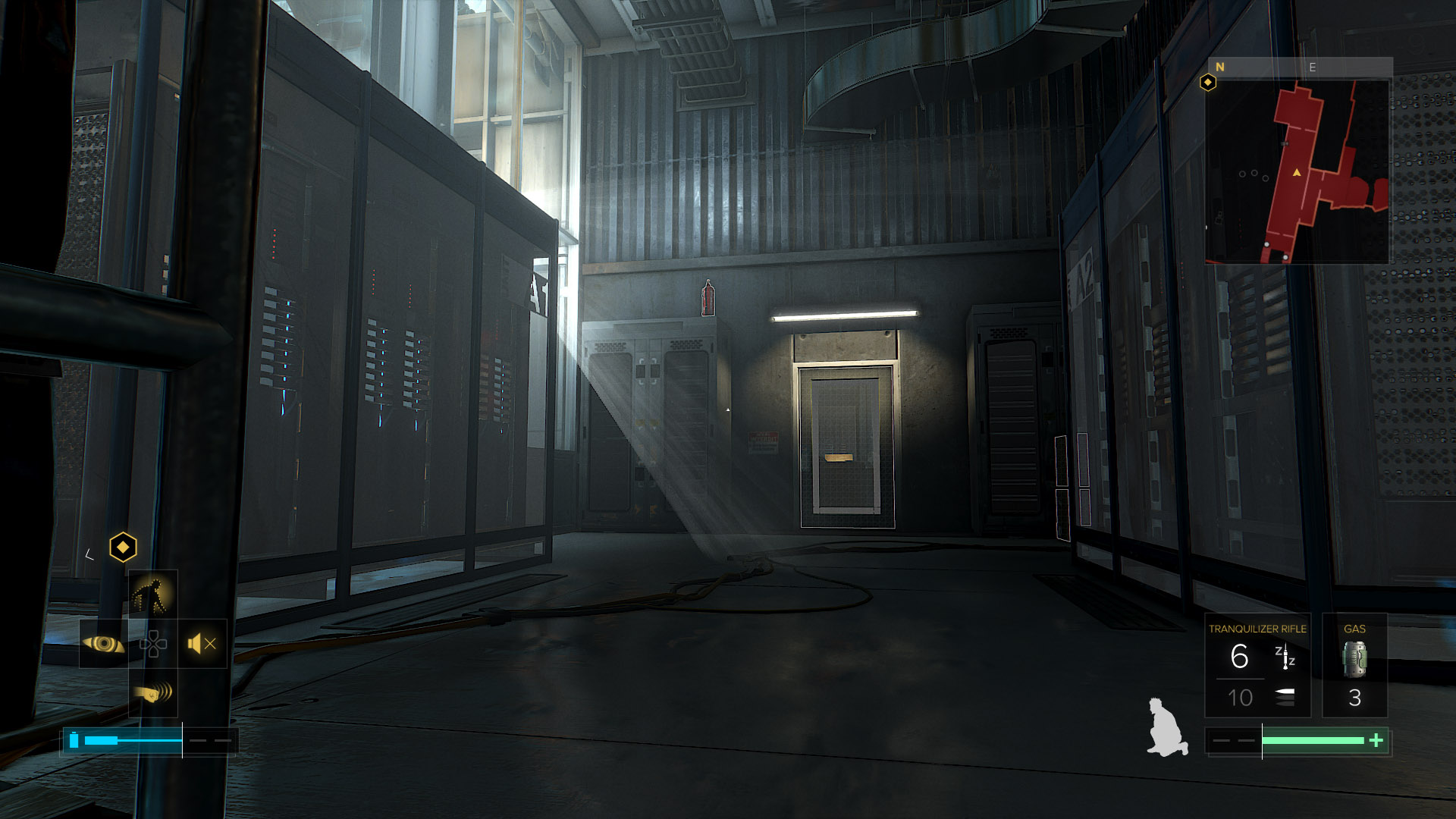 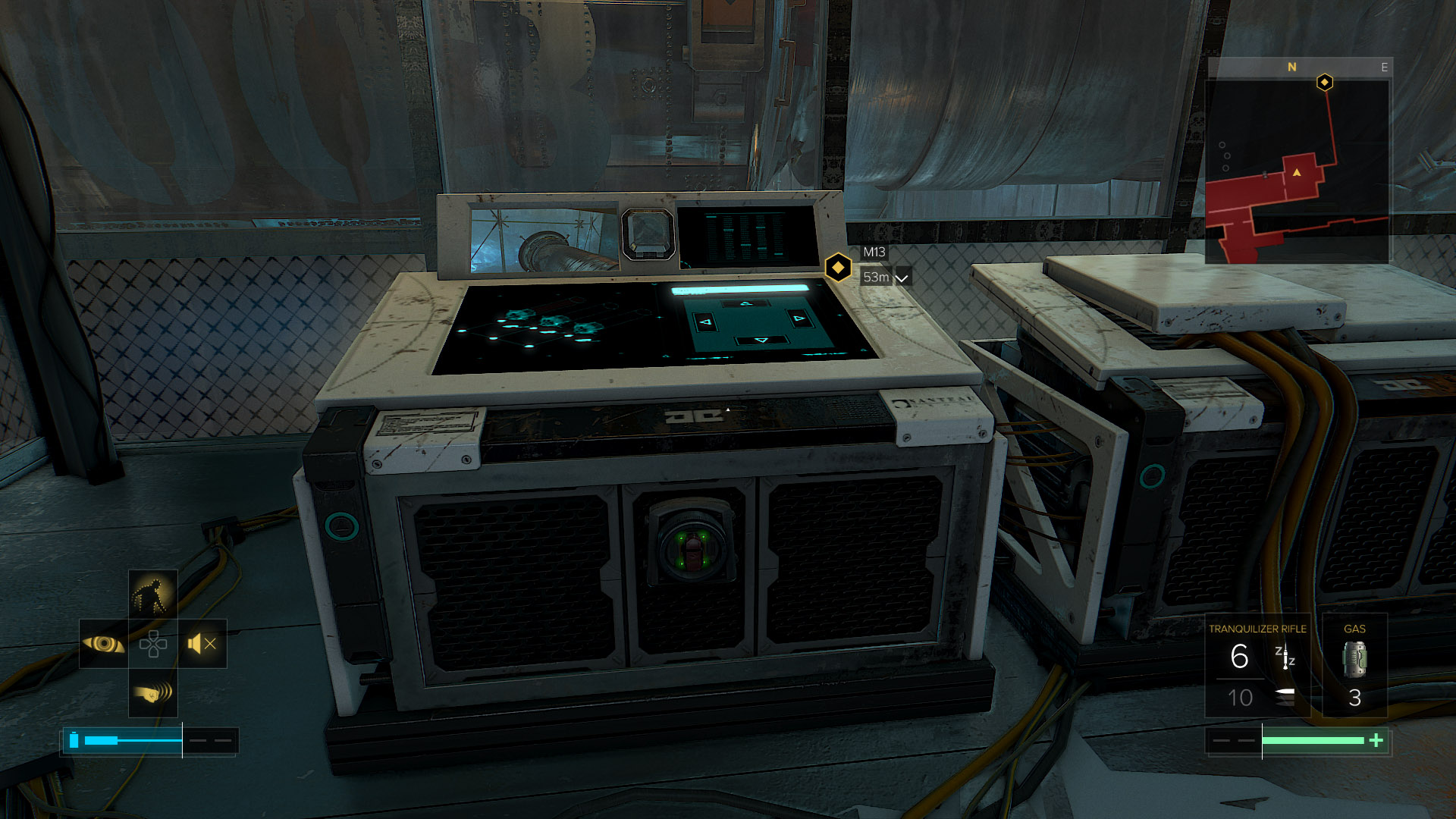 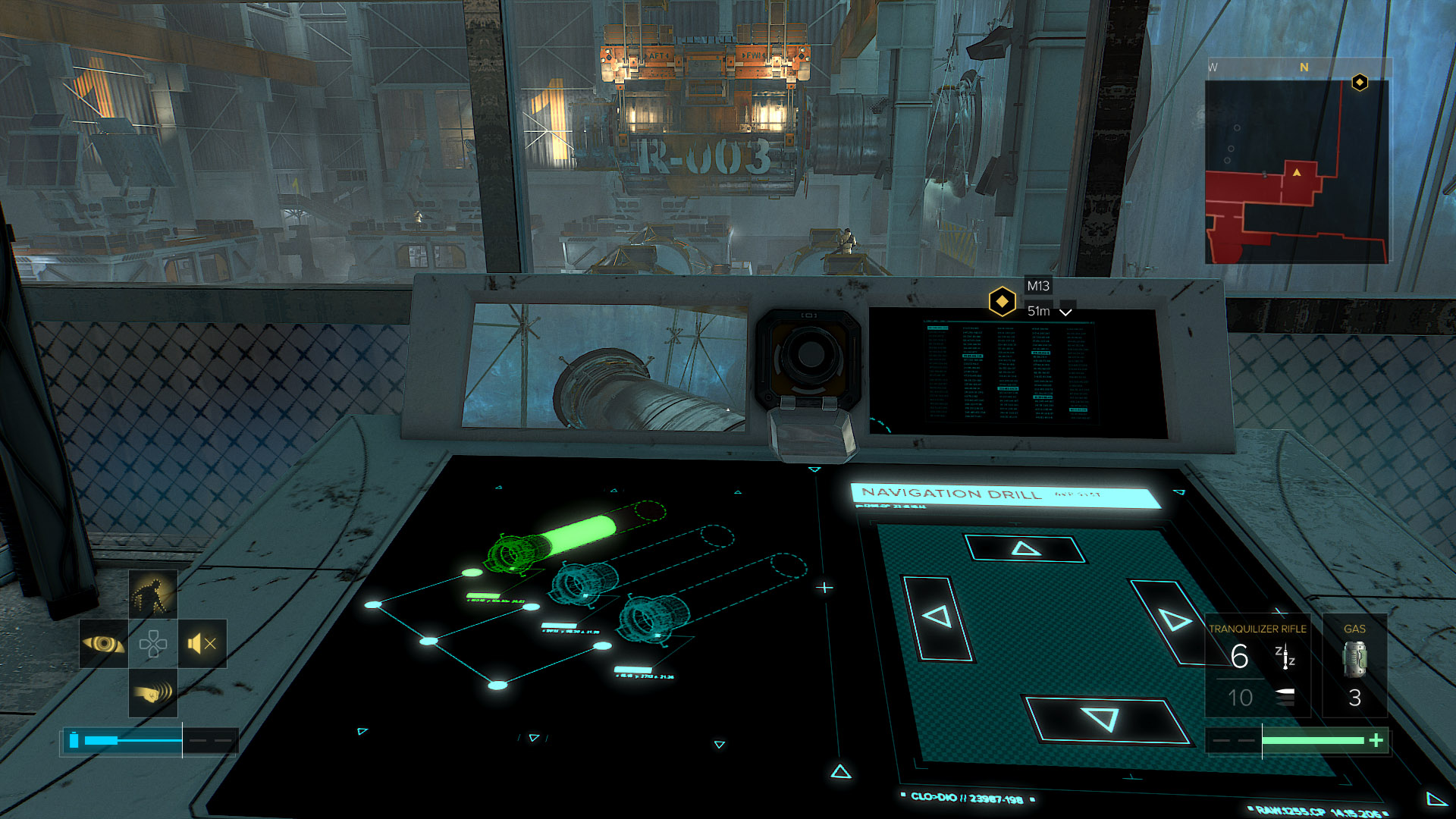 Head back the way you came and down the opposite end of the hallway. There's a guard leaning against the railing on the other side of the door. Knock him out and head down the stairs.

Hug the perimeter wall and use the vent system to make your way to the other side of the large room. Pass through a smaller room and into another vent until you're on the other end of the larger room. It looks like it's going to be more difficult than it is.

You'll see a camera attached to a wall and a patrolling guard. Wait for the guard to pass and the camera to look away from you. Don't go into the trailer since there's a guard in there. Instead, climb to the top of it. There's another guard on top, but you'll approach him in a position where he won't see you. Knock him out and proceed to the waypoint. 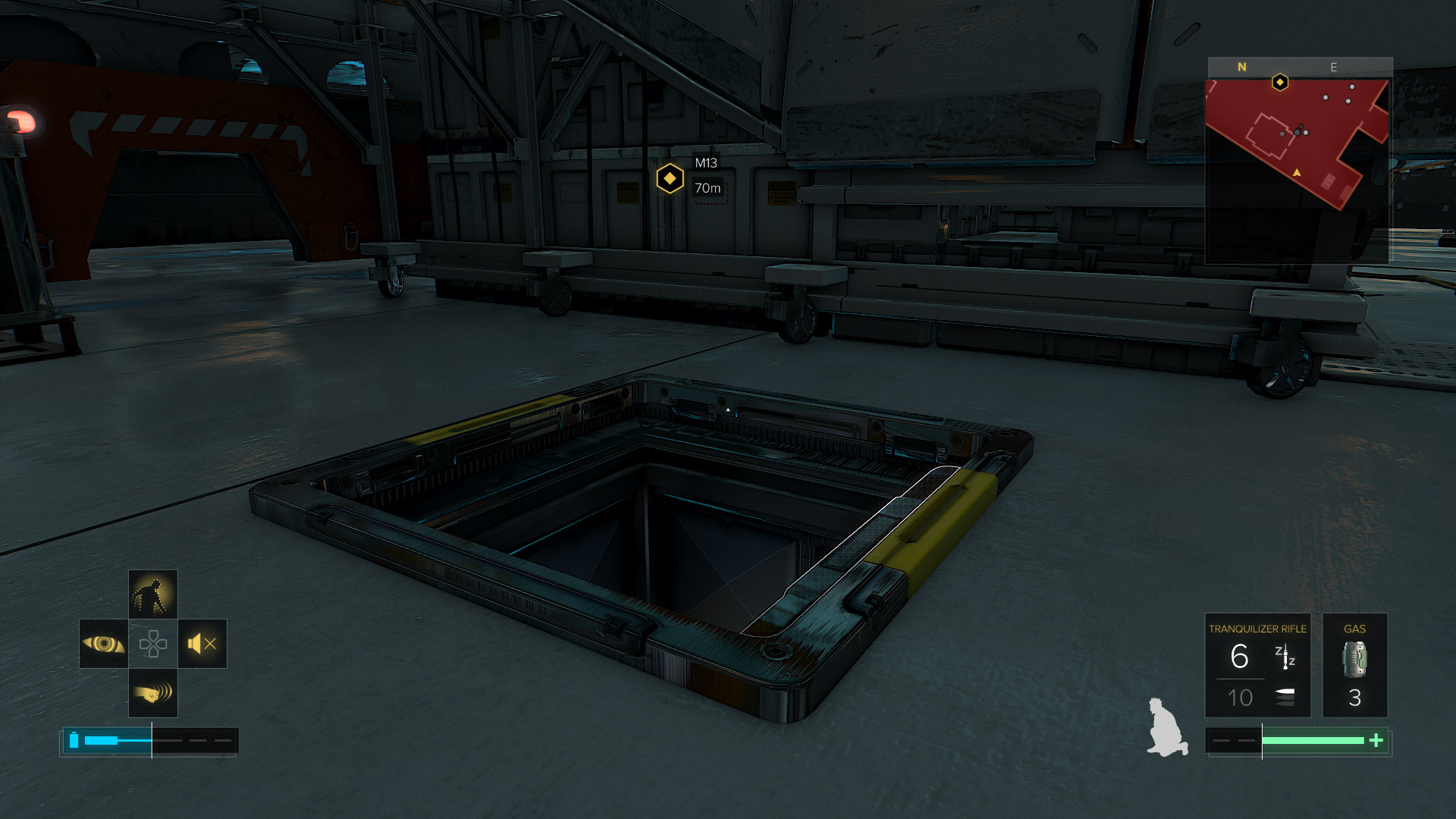 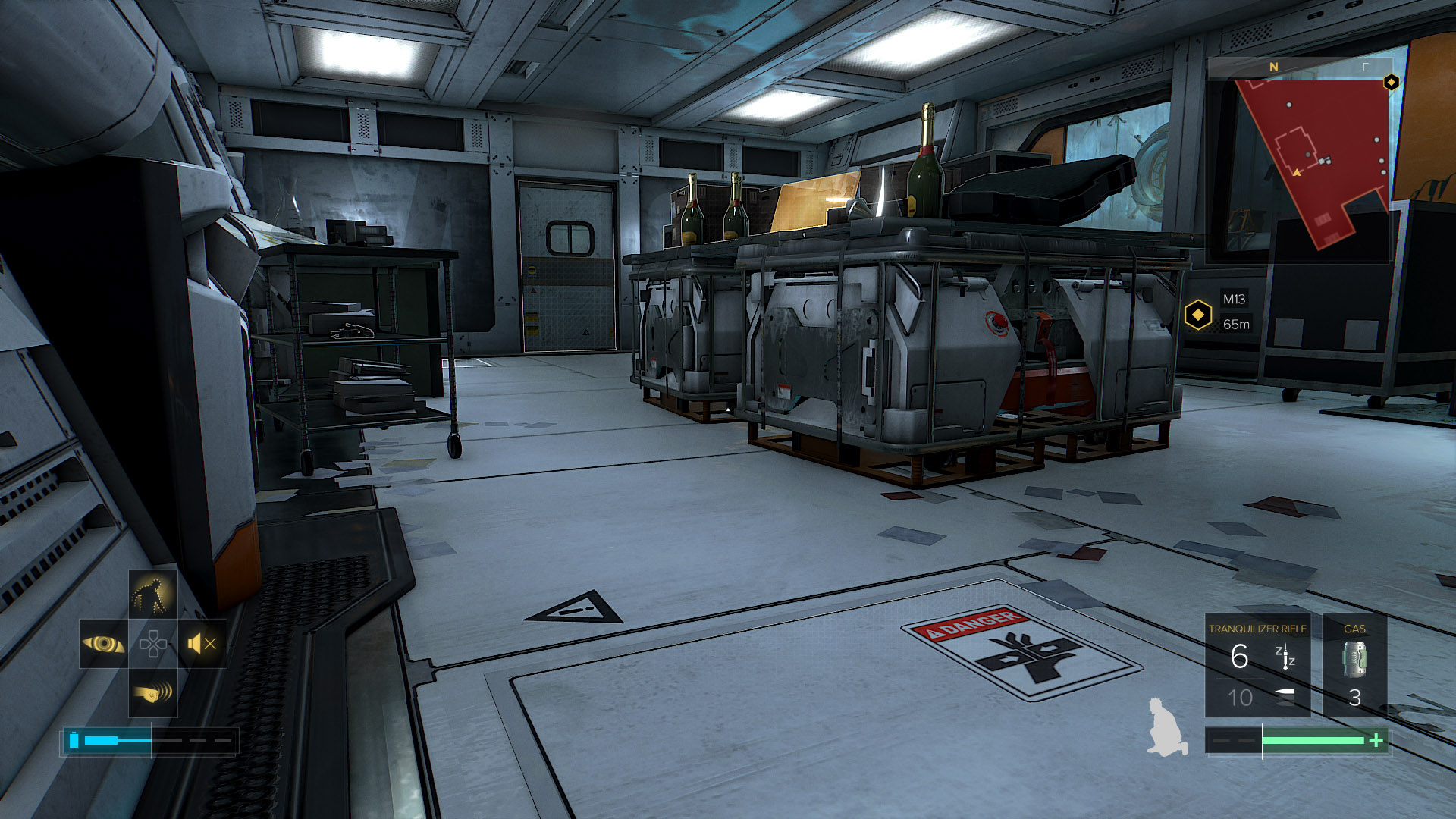 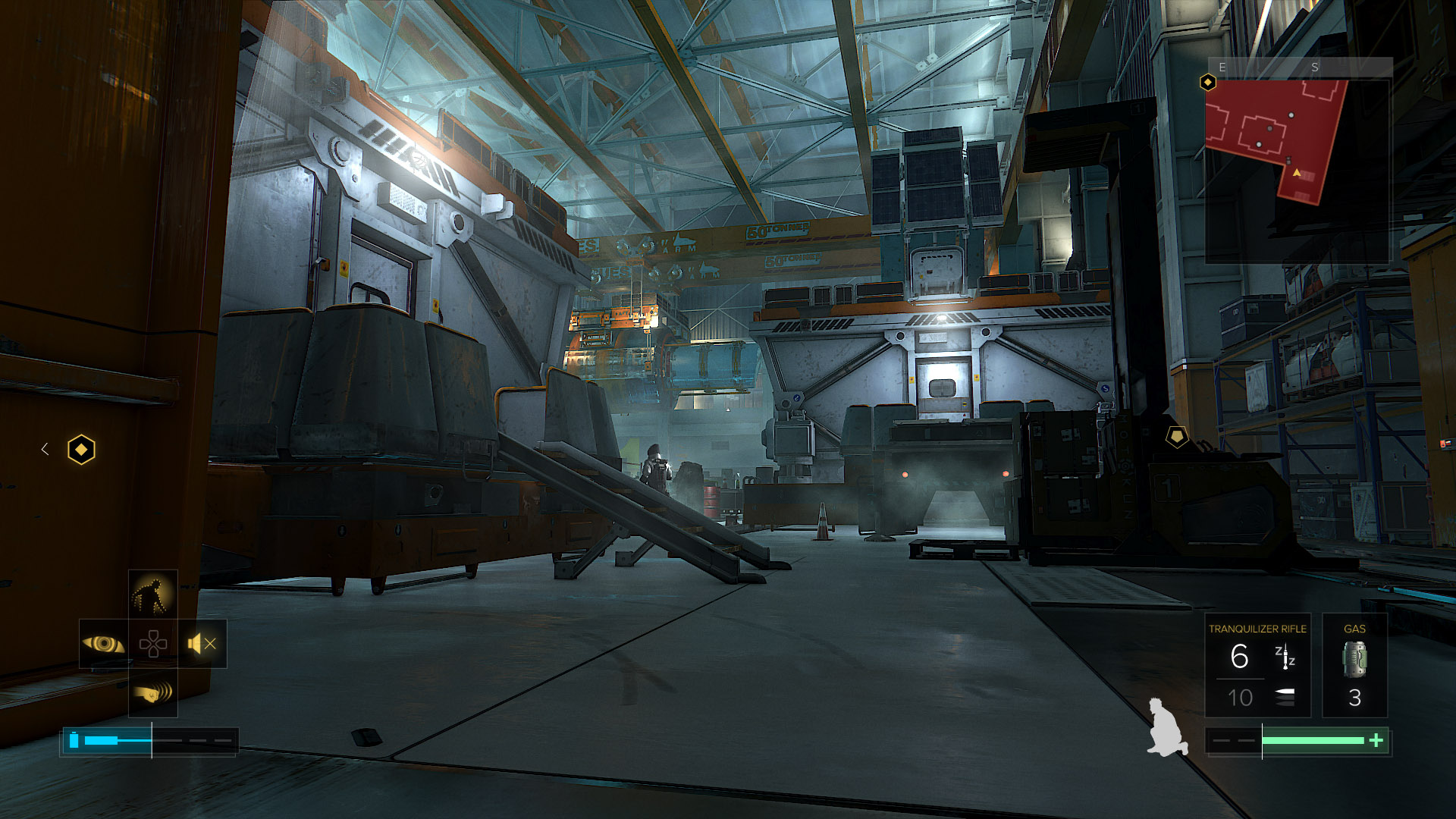 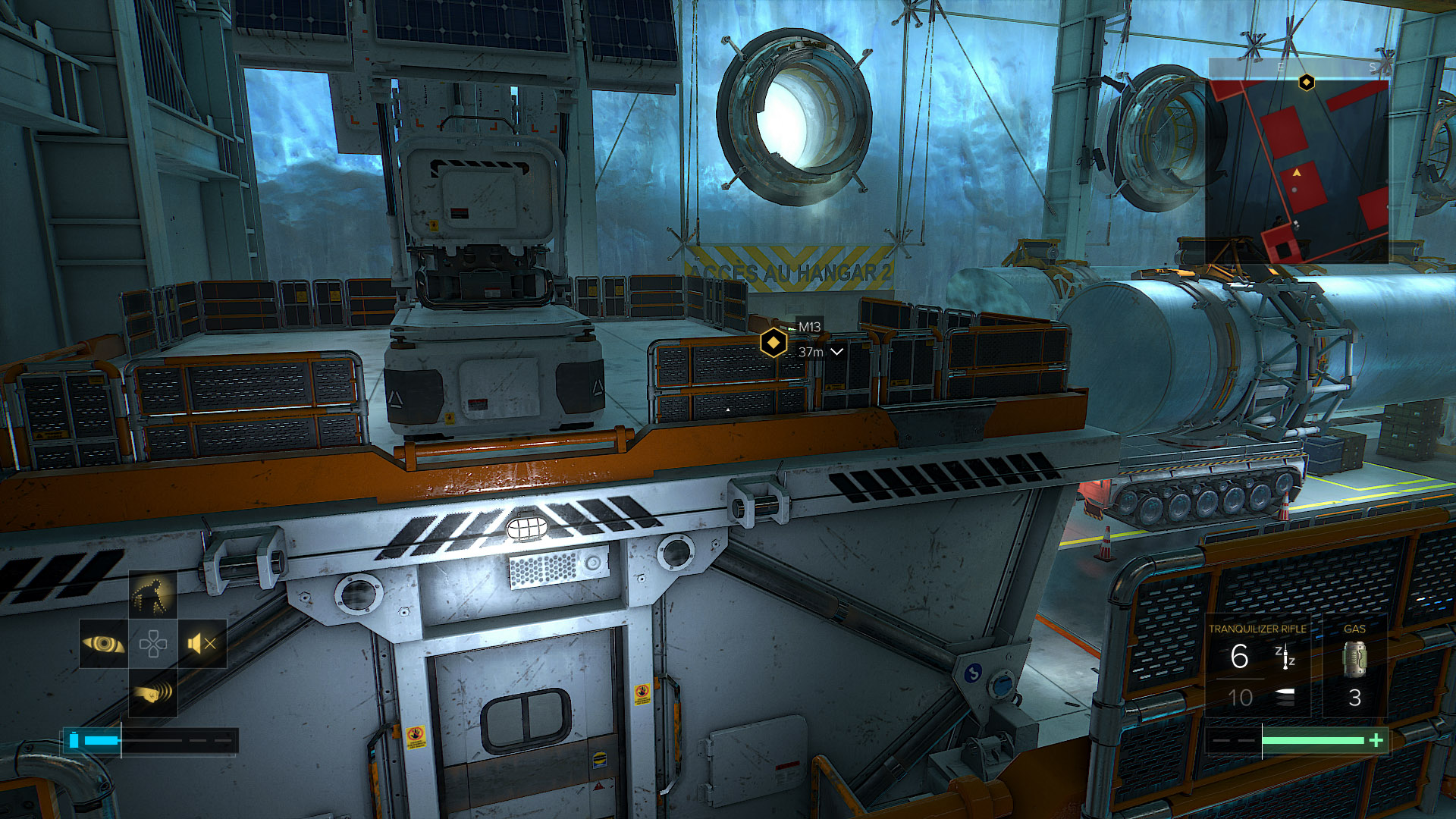 Once you jump up on the structures to get you closer to the waypoint, there's one more guard between you and the door. Wait for him to walk away, and then slink your way to the door. Or you can always tranq him. You'll have to hack into the waypoint door, so it's easier with him out of the picture. 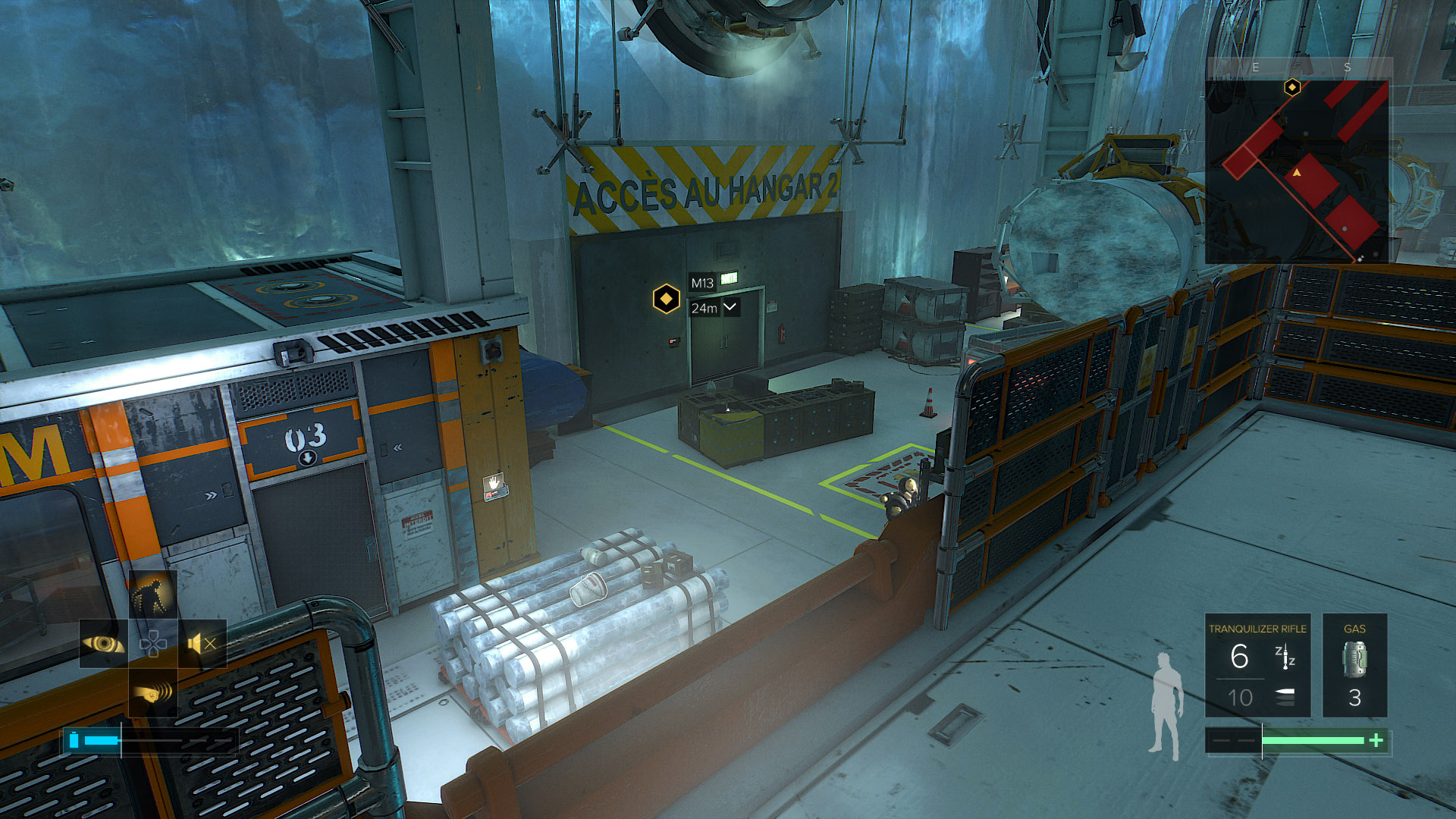 There are four guards in the long hallway. Lure the two closer guards into the entryway one at a time to knock them out and drag them out of sight, or tranq them one at a time. Either way works.

Hug the right side of the room. There's a trench you can crouch in to stay out of site, but watch out for mines. When you see them, head inside the vent on your left to go around them and reach the other end of the area.

The other two guards are in your way. While crouched in the trench, grab and throw one of the boxes above you. That will get them searching. Then you can crouch by them and into the next large room. 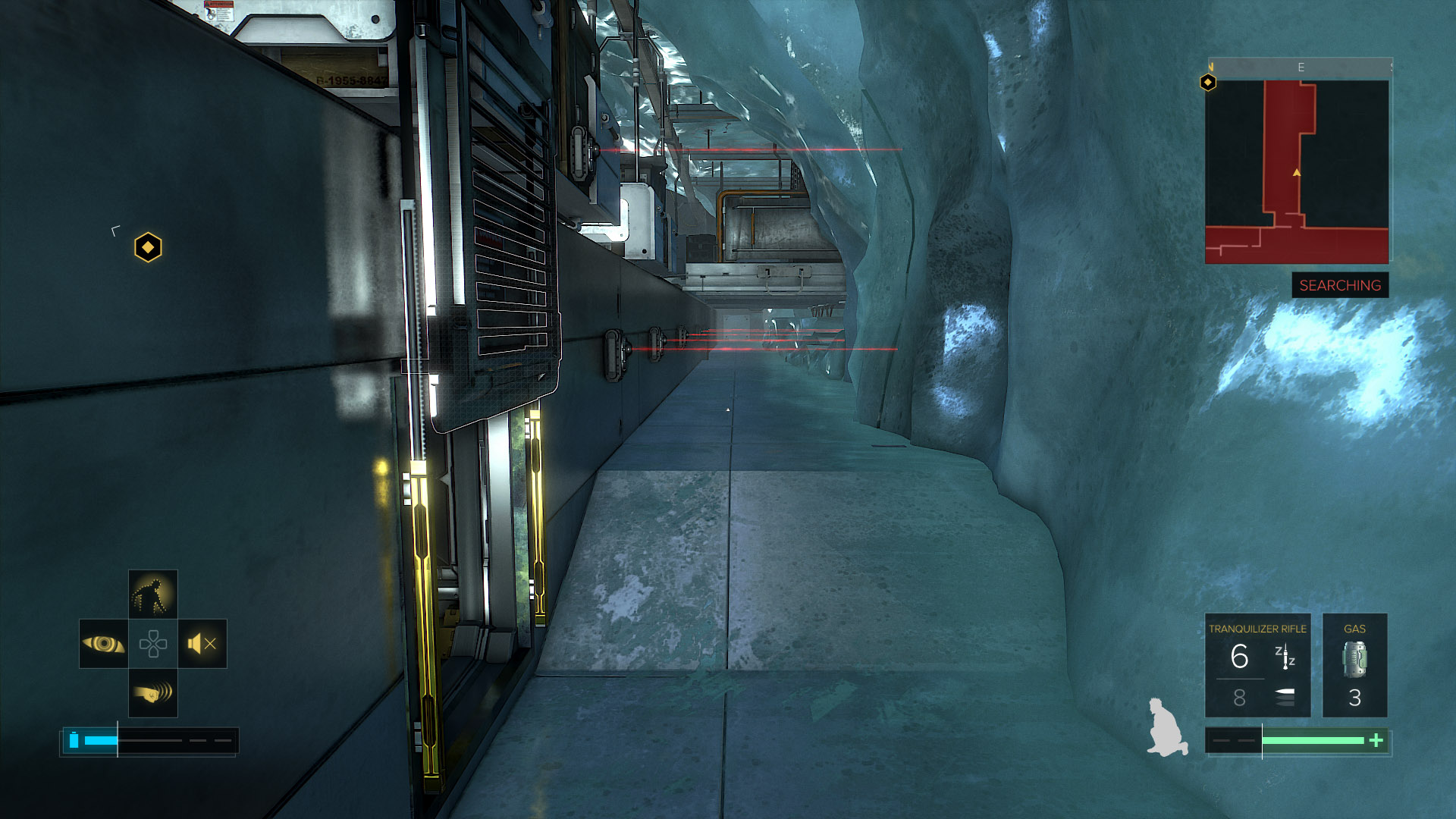 Crouch walk to the corner of the room and near the next waypoint. Use the Glass-Shield Cloak to slip by the guards and cameras to reach the stairs. You'll only need it to be active for about two or three seconds. 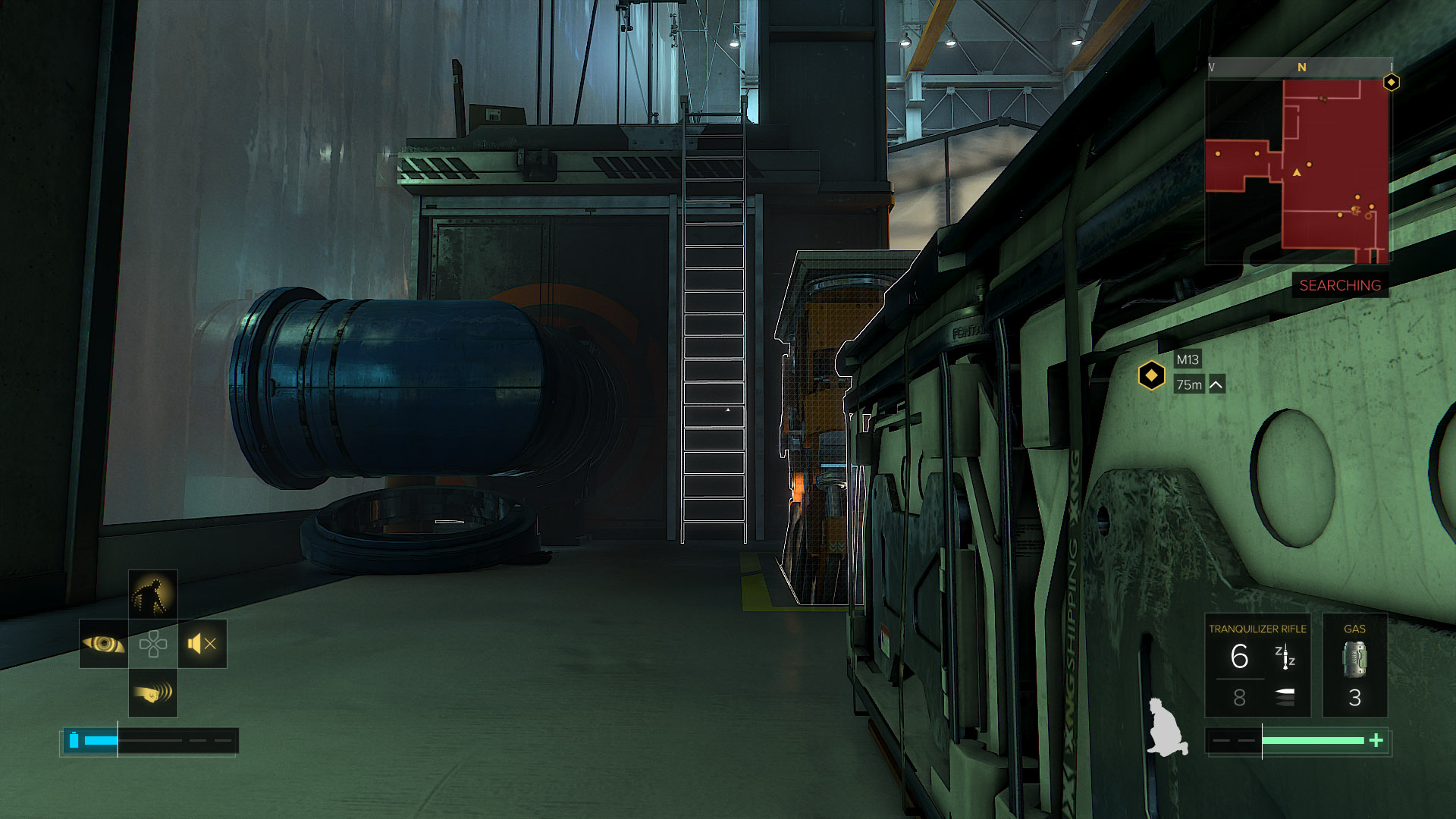 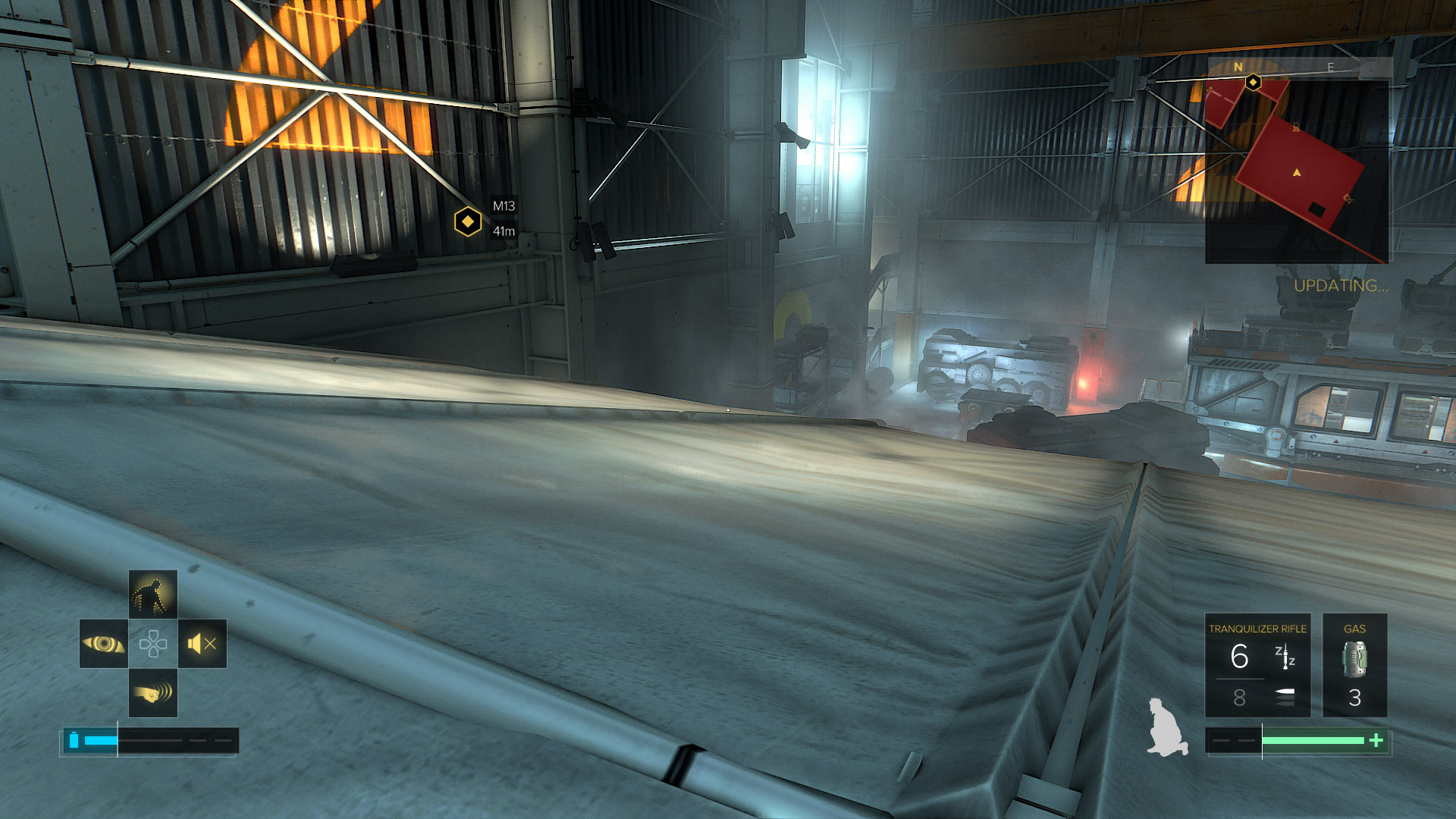 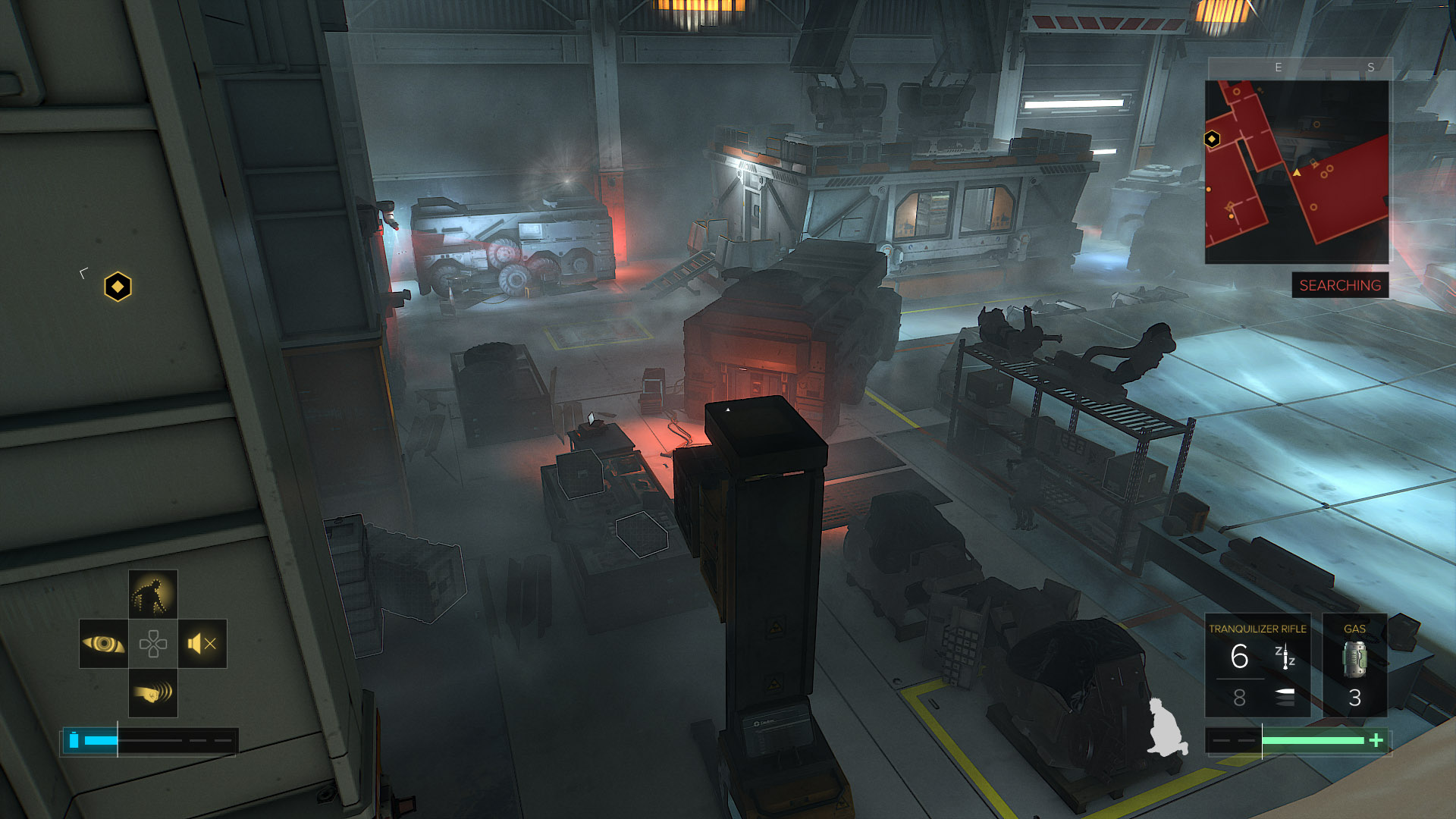 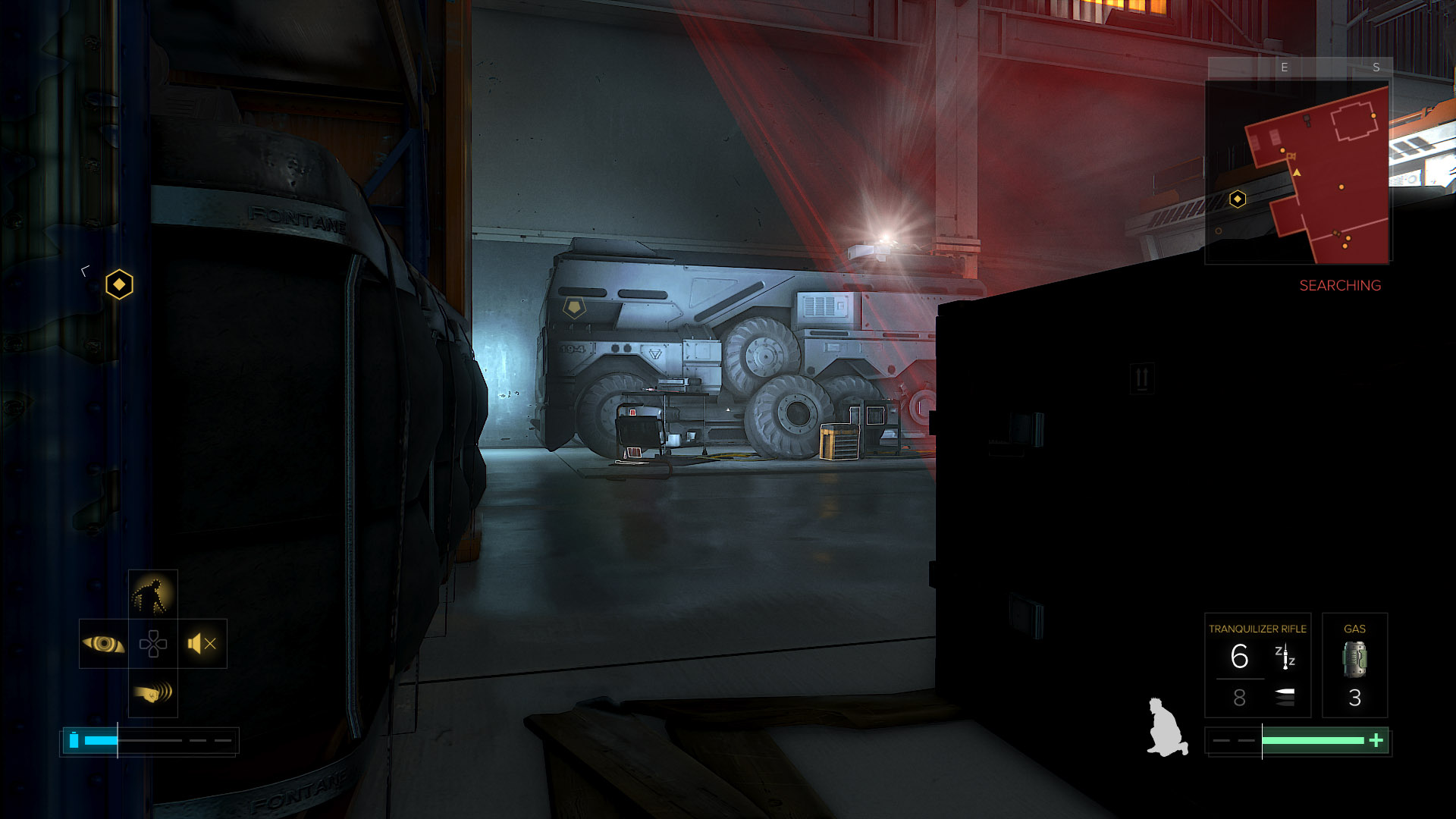 Crouch up the stairs and into the next room. Each room in this area has an EG switch next to the windows that looks black and green, which blacks out the glass windows. Press any of those switches you can find.

There's a vent that you can access if you have the strength aug, but going through the main door is the easier route. 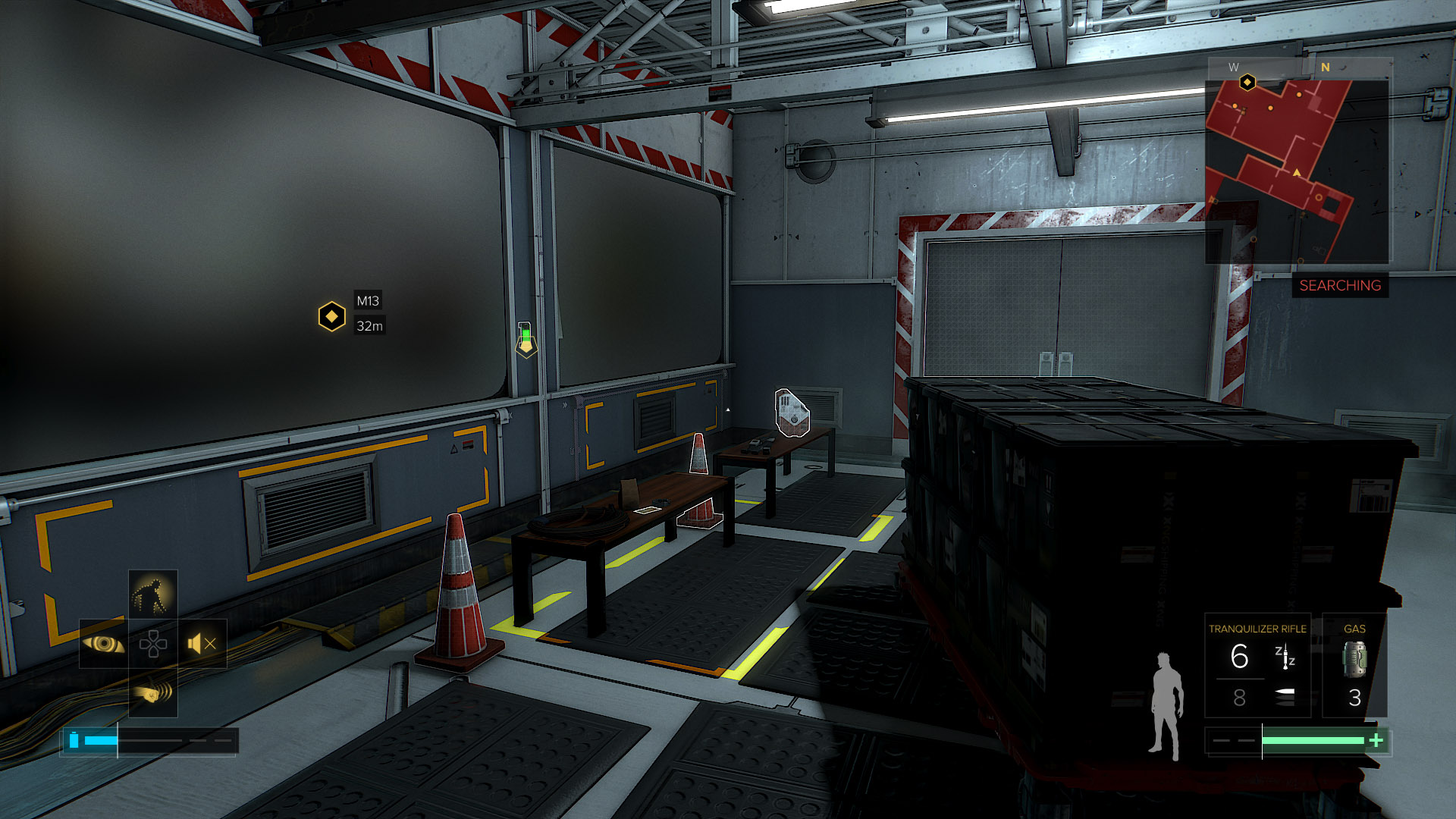 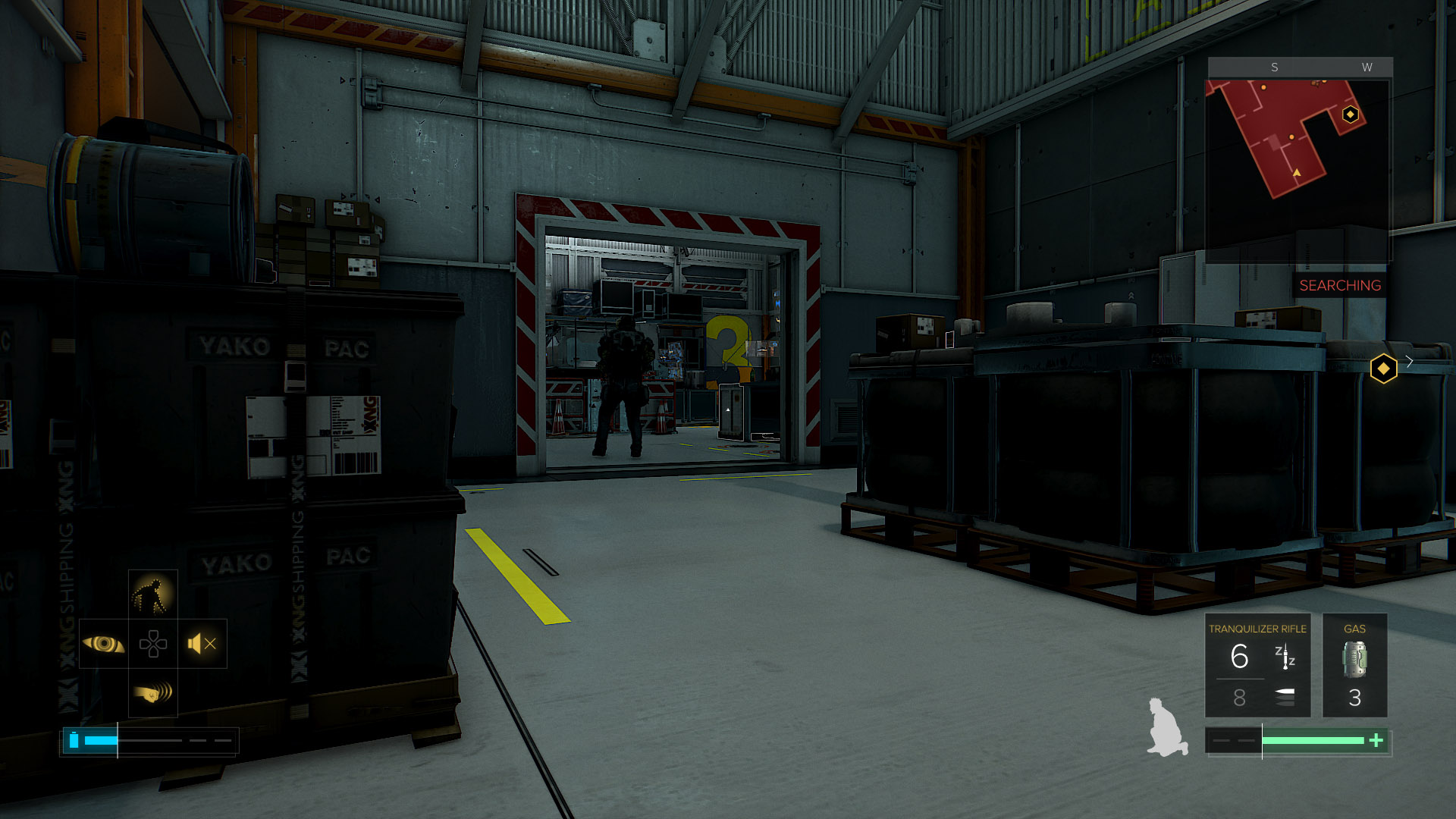 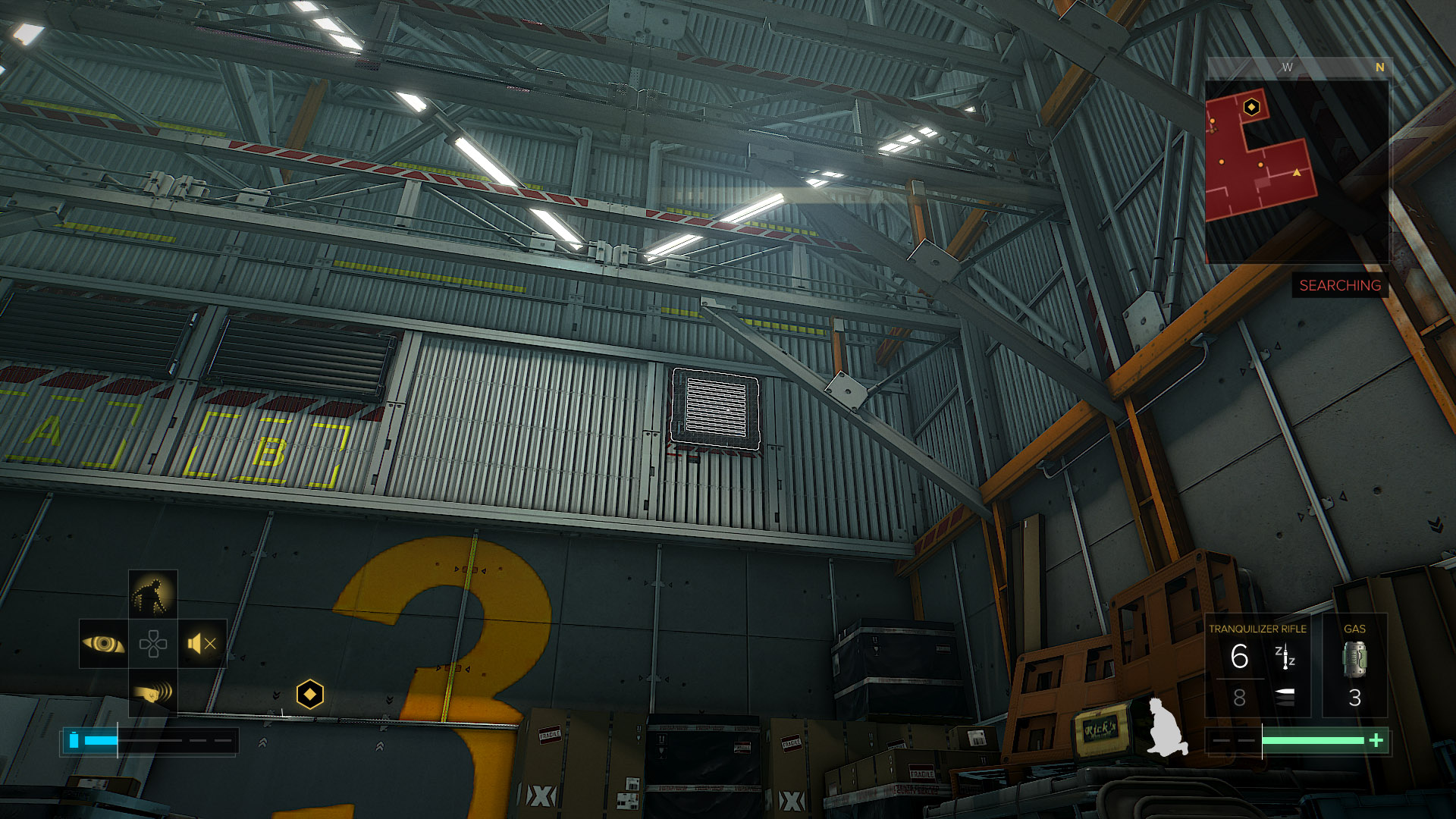 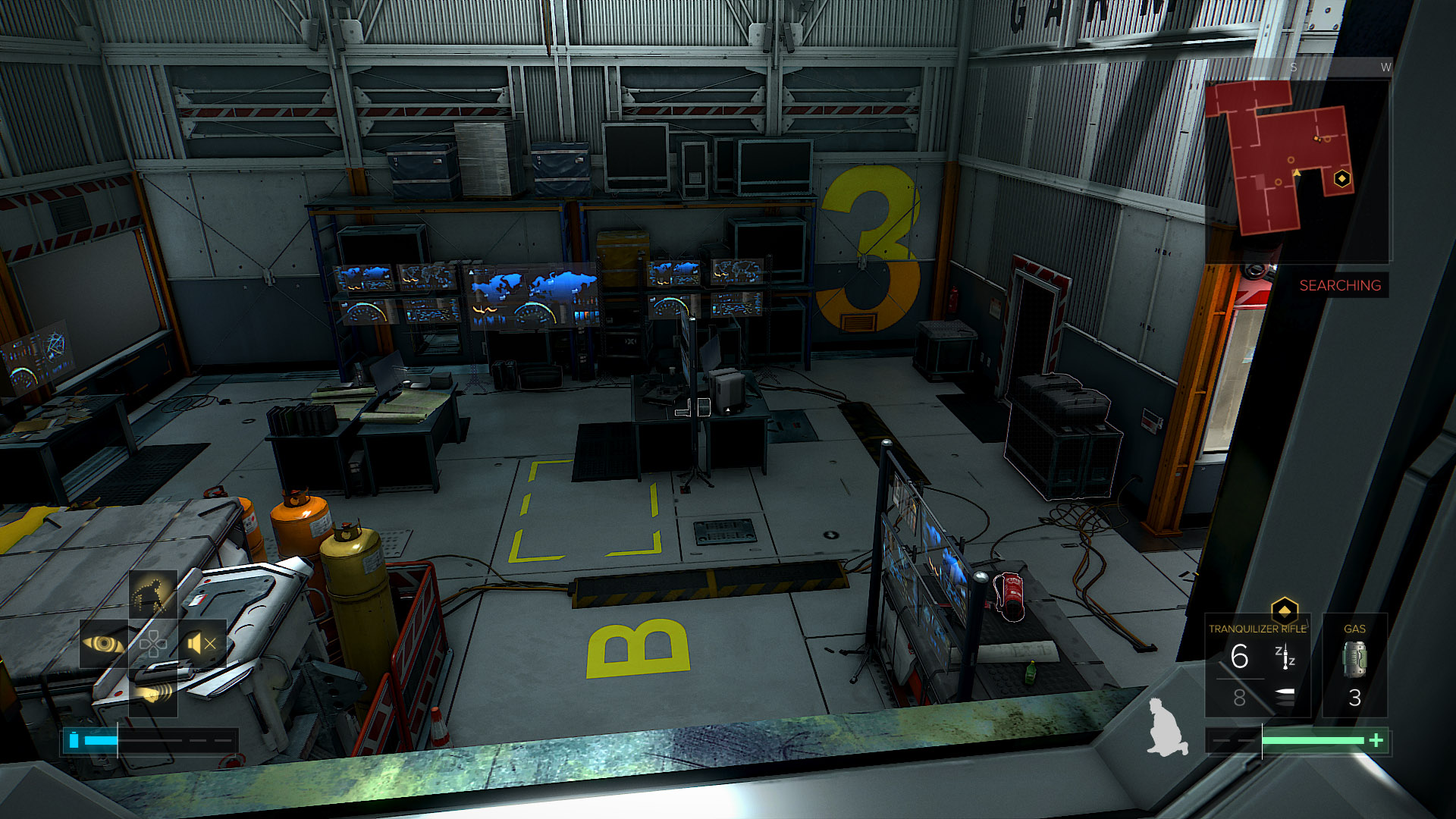 Open the door, and head to the room directly across the area with the red and white door frame. Head through the room while blacking out the glass on your way.

The next room has a guard with his back to you. Leave him alone, and head to the vent that's high off the ground on the wall. It can be tricky to open mid-jump. Jump and mash the interact button while you're in the air. Get in there and follow the vent's path.

The vent will take you just above and next to the waypoint. Activate your Glass-Shield Cloak and head straight for the waypoint. You won't need to hack anything. Just press the button, and get into the elevator. Hop on the jet and get out of there. 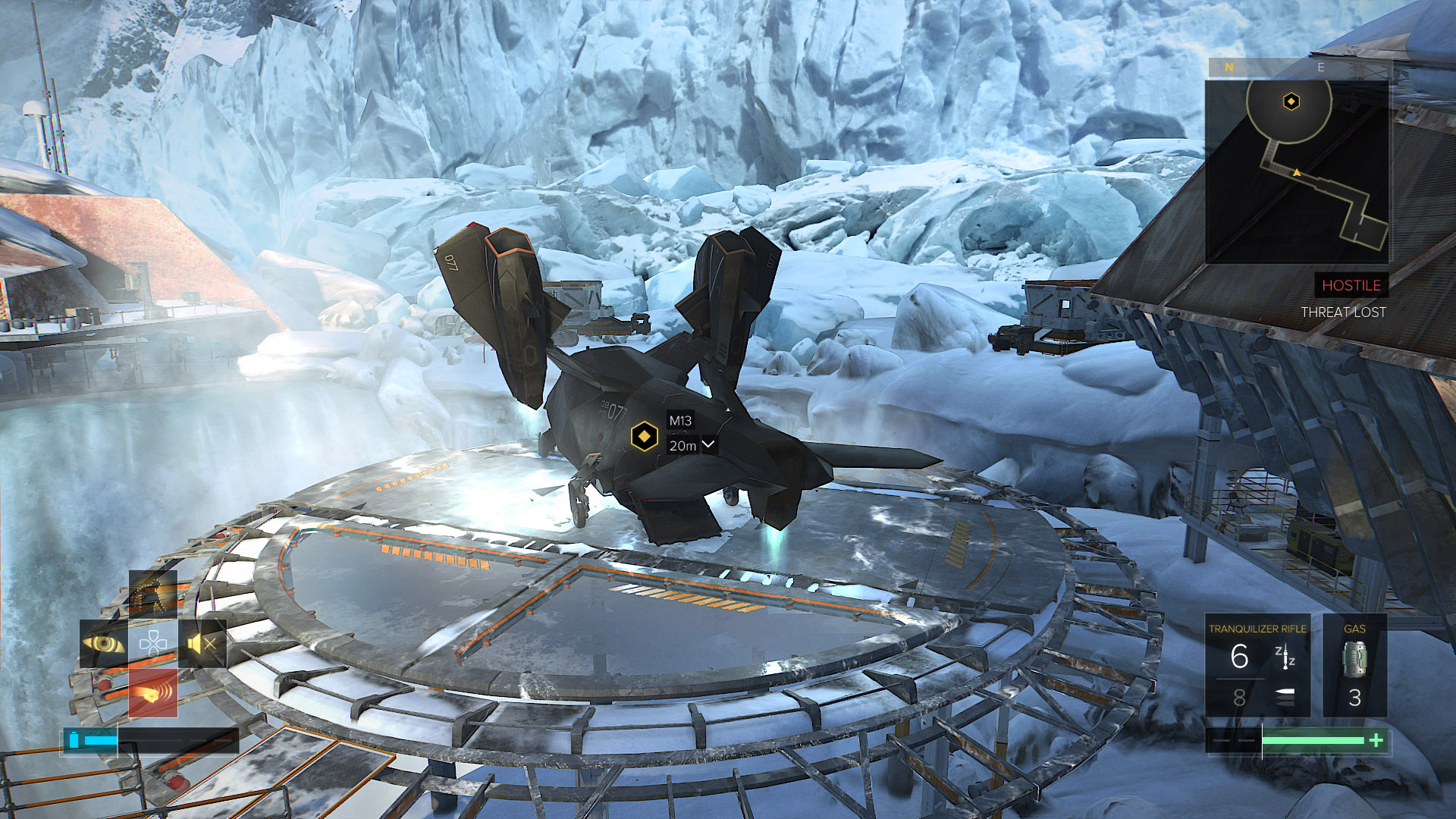