Once you're back in the city, you can meet with Vega and Miller. Traveling on the streets is not as easy as it once was. Martial law is in effect. Police are executing anyone found on the streets. Tread lightly. Fortunately, you don't actually need to do any sneaking. A cutscene handles the heavy lifting. Head to see Vega first to trigger a conversation with her.

Now you'll actually have to sneak around to see Miller. A cutscene isn't going to help you this time. To make things easy, the cops are really only patrolling solo or in teams of two. There are cars and barriers everywhere that provide cover. Stick to perimeters. Hug the walls and buildings and crouch your way toward the waypoint. You shouldn't have to engage any of the officers along the way. Use the Glass-Shield Cloak if it gets hairy. Head down the elevator to reach HQ, and trigger the cutscene. After speaking to the therapist, head upstairs to talk to Miller. 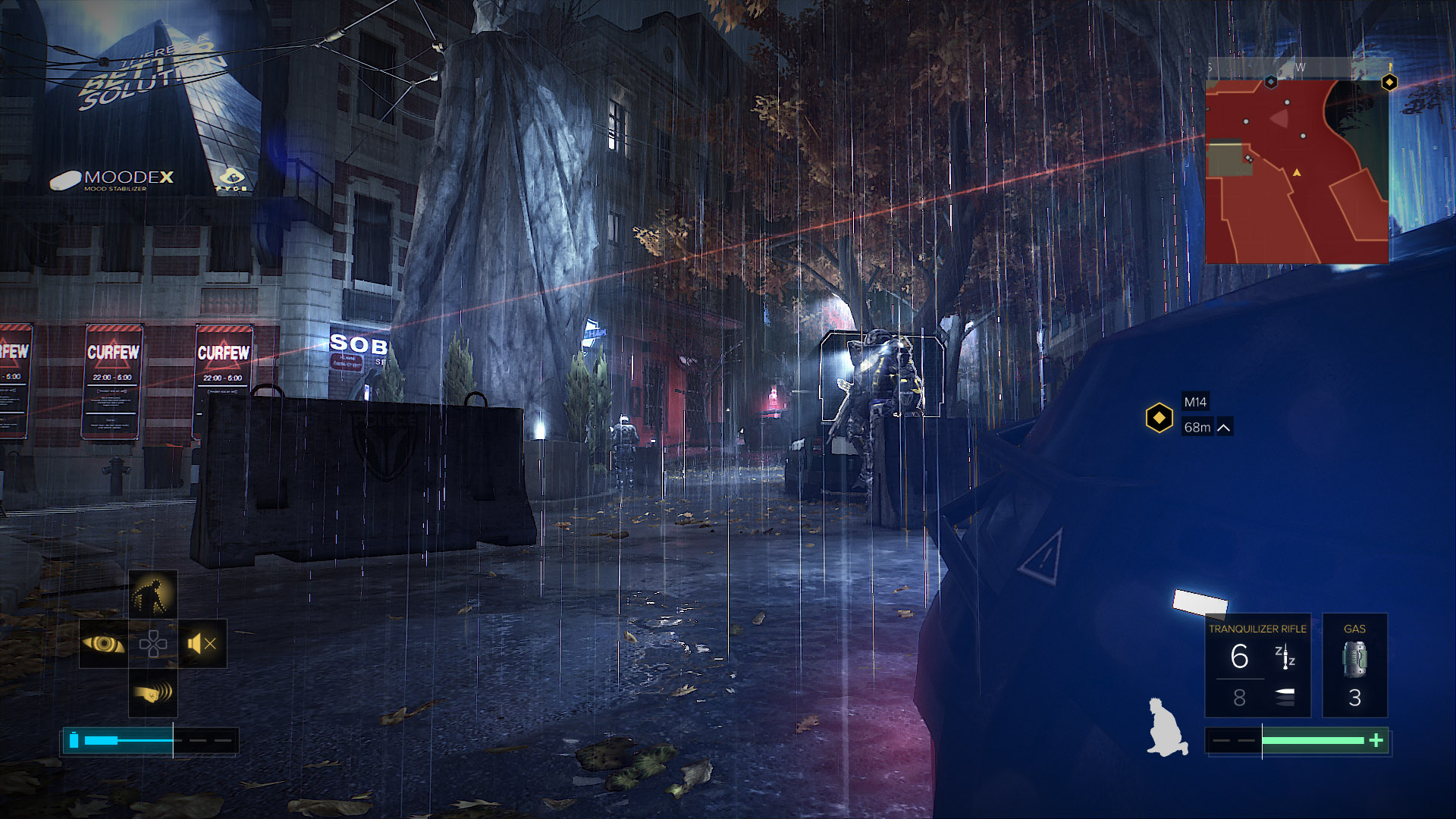 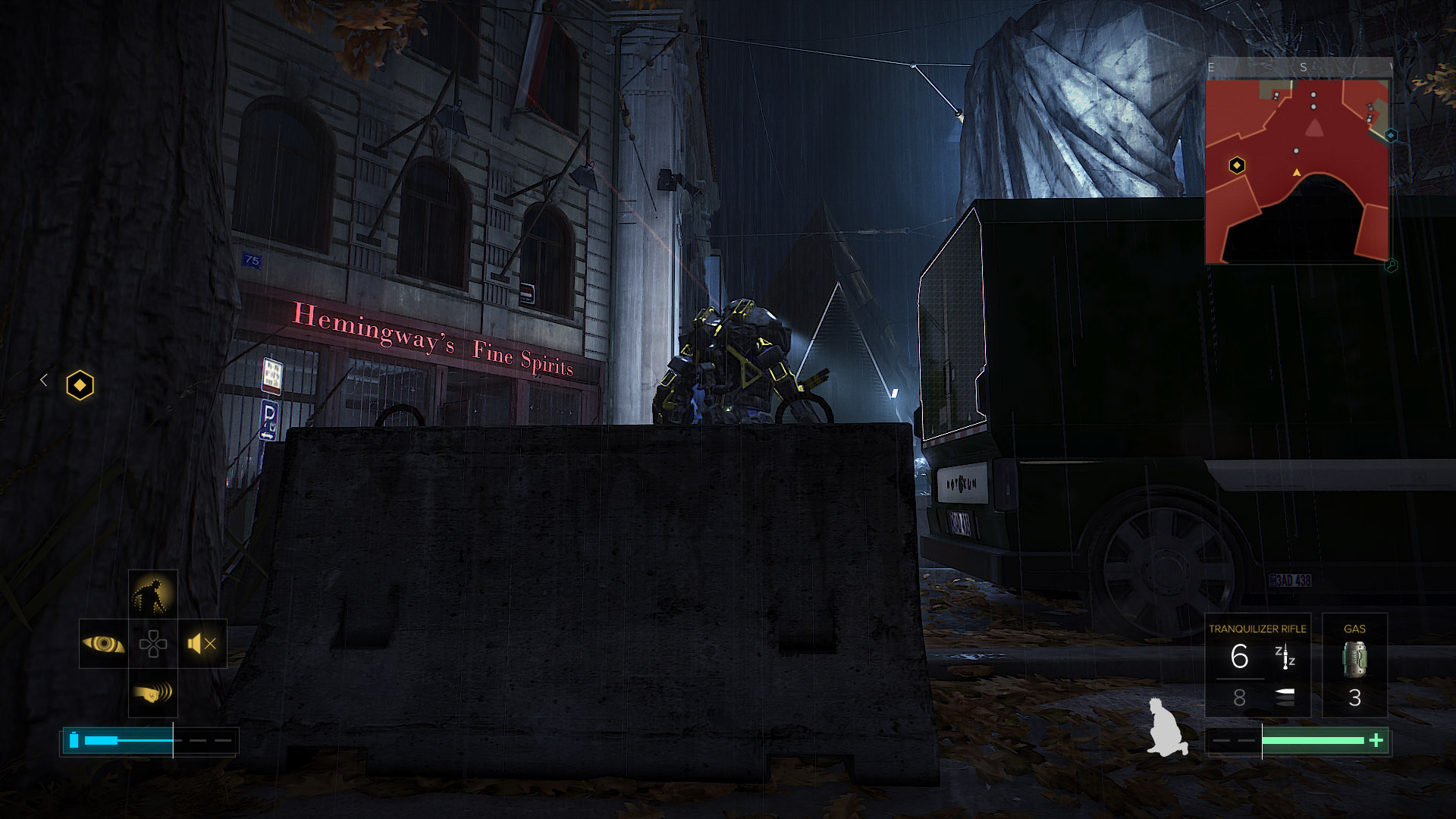 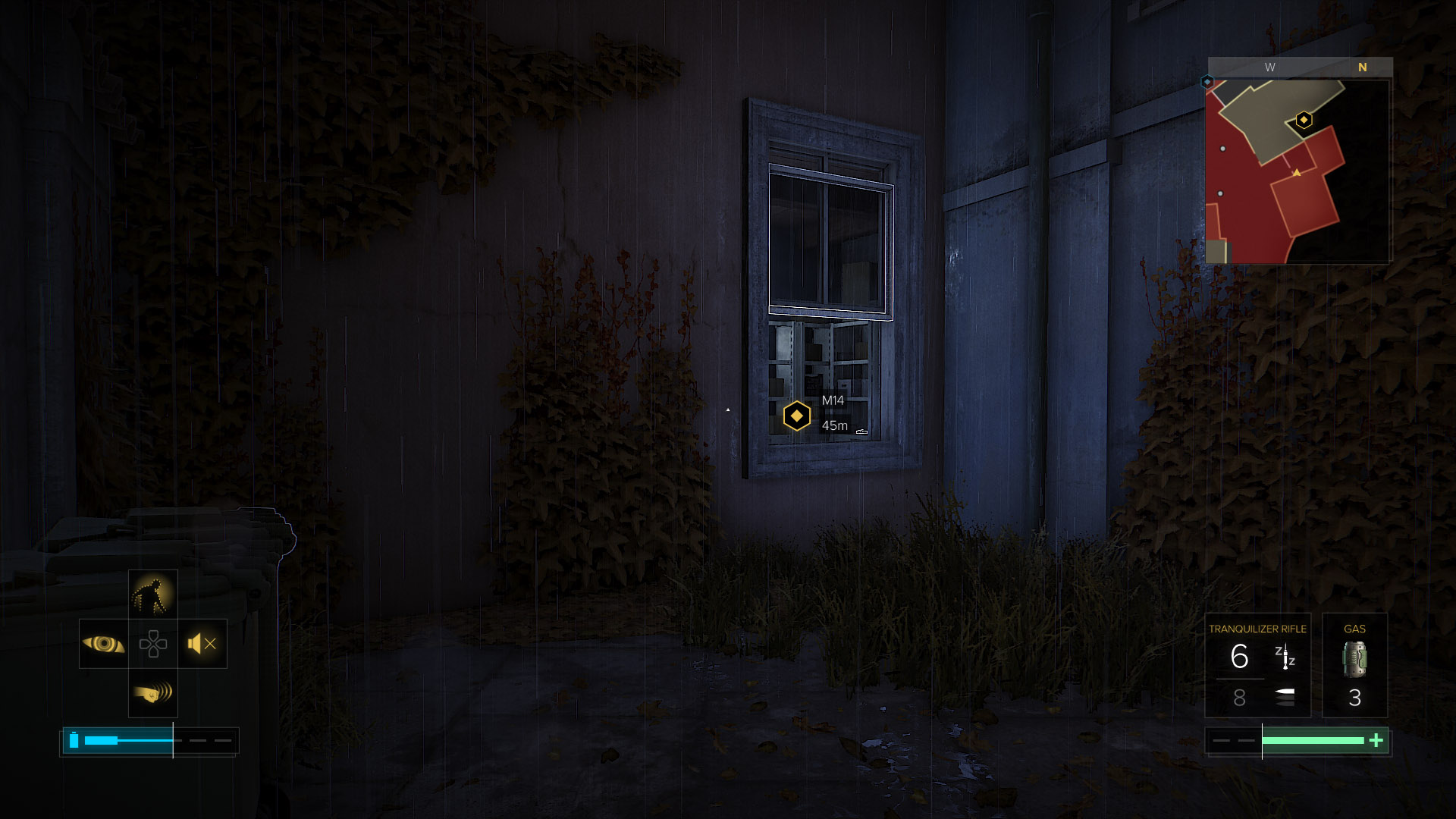 After the cutscene, Jensen is sent back to the streets to sneak to the next waypoint. You have to travel back to where you came from, so just take the same route. Hug the corners and walls. There's one tricky part with one heavily armored officer and a typical officer. Use your Glass-Shield Cloak to sneak by them. You won't need to use much juice for it. 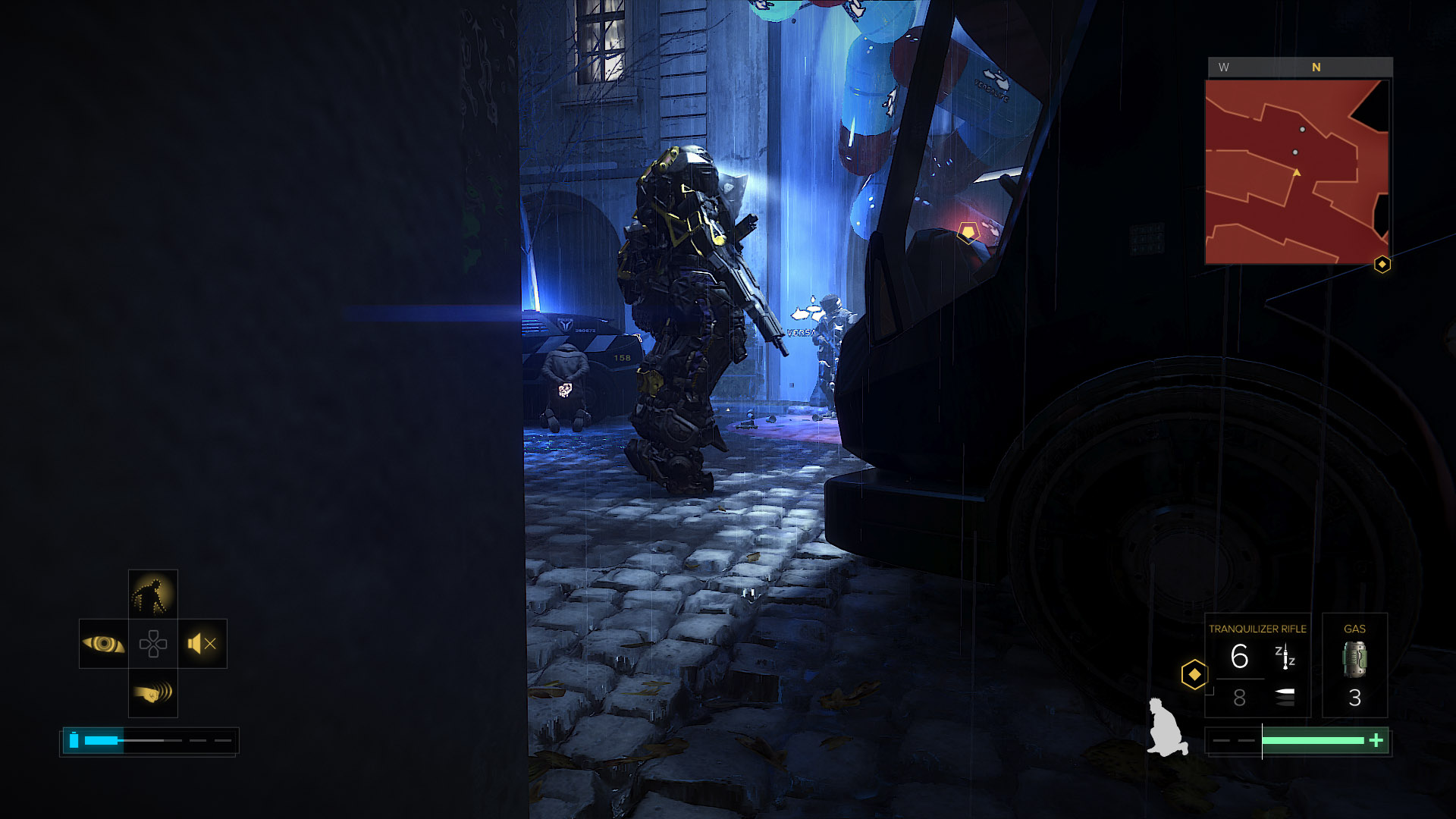 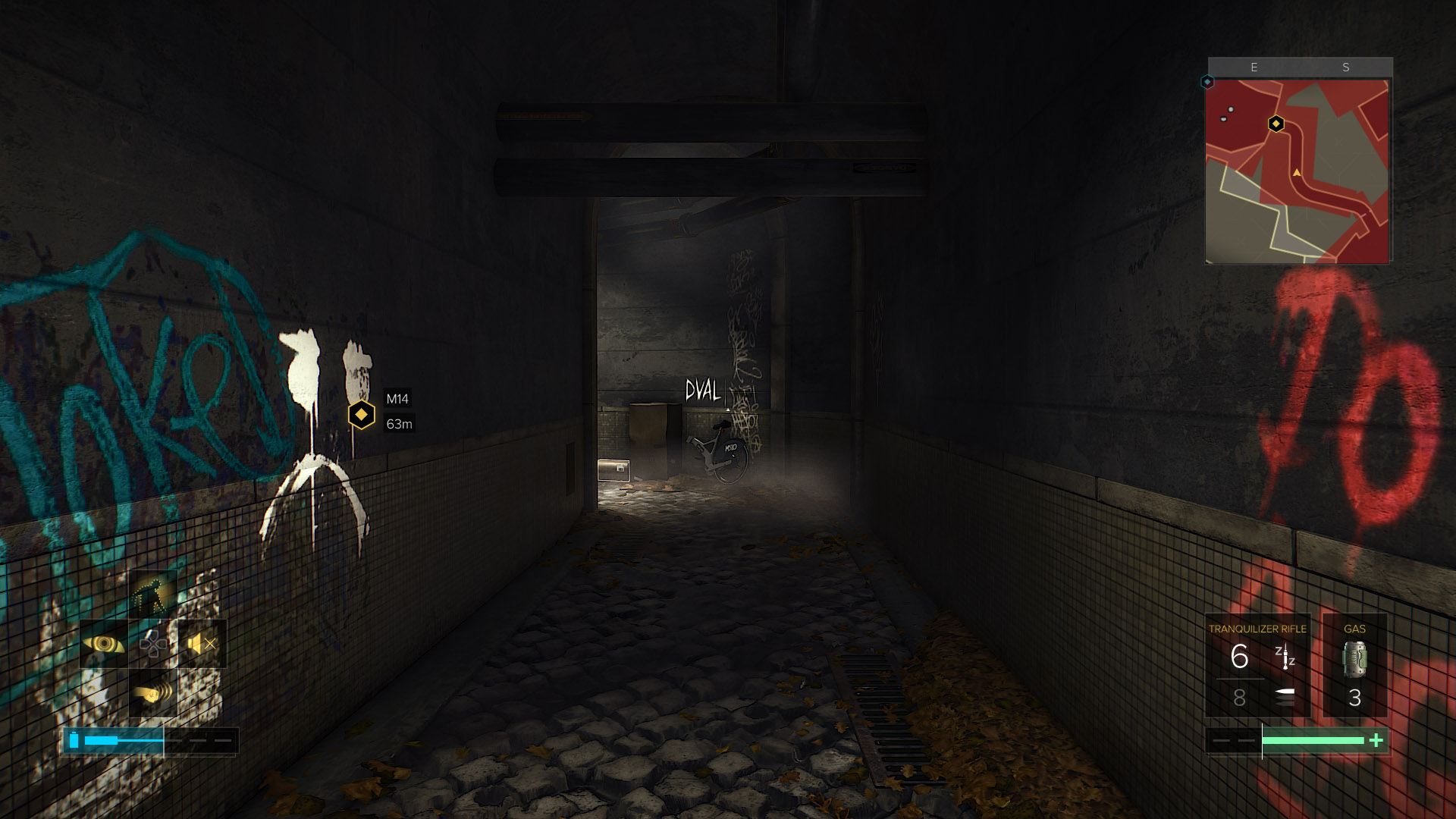 The Red Light district has more patrols but also more cover. Stick to the left once Miller contacts you on the radio. There's an oscillating turret. Just wait until it looks away to sneak by. Officers' yellow meters will spike from time to time on this route, but you'll find fresh cover before it fills up and they start getting suspicious.

But wait, you'll need the Dvali keycard before you can continue. Head inside the Red Queen, which is just the left of the hallway that leads to Dvali territory. There's a longhaired Dvali henchman there. Make sure he's by himself, then knock him out and search him for the keycard. Now head back out and down the alley. 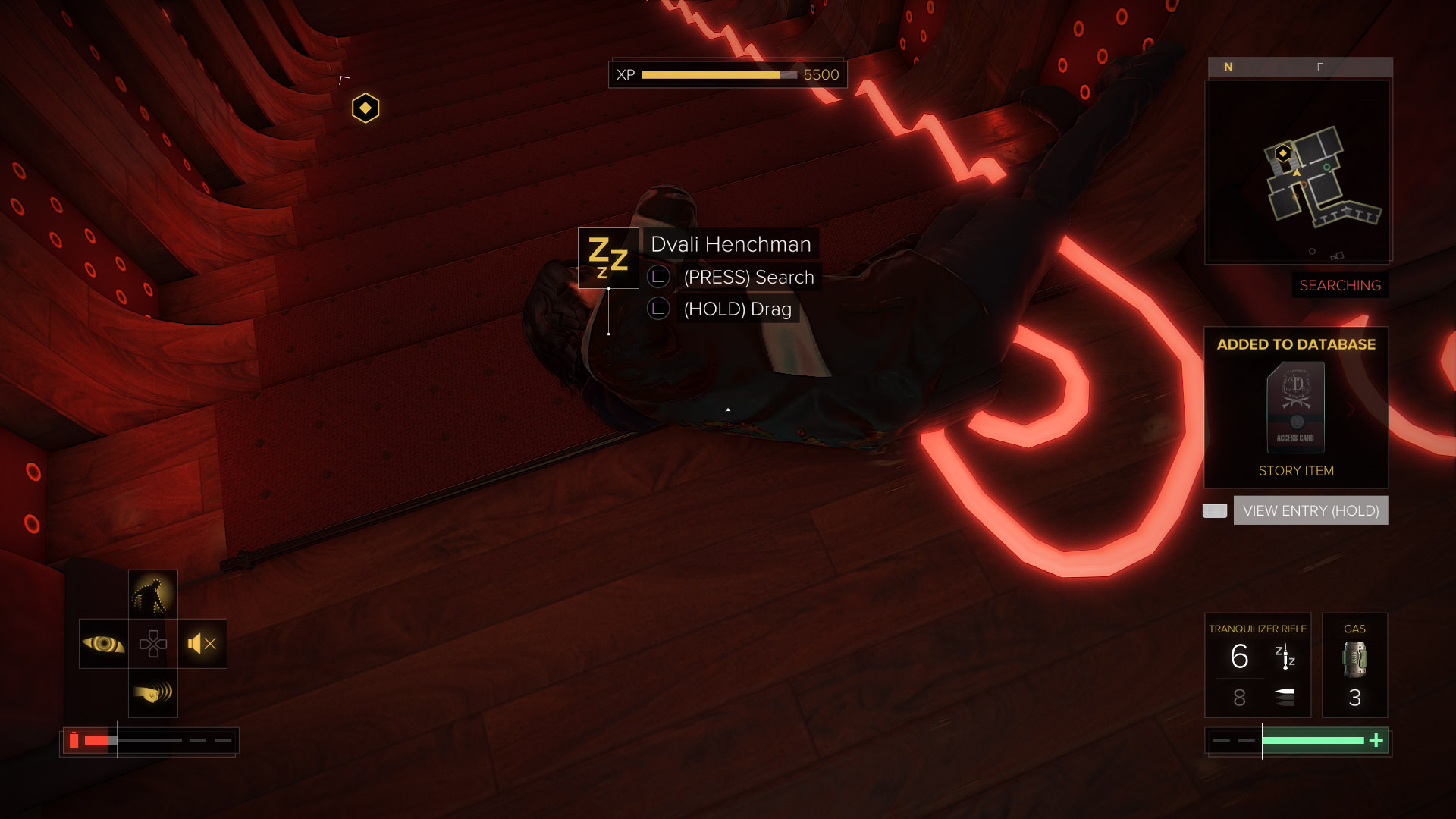 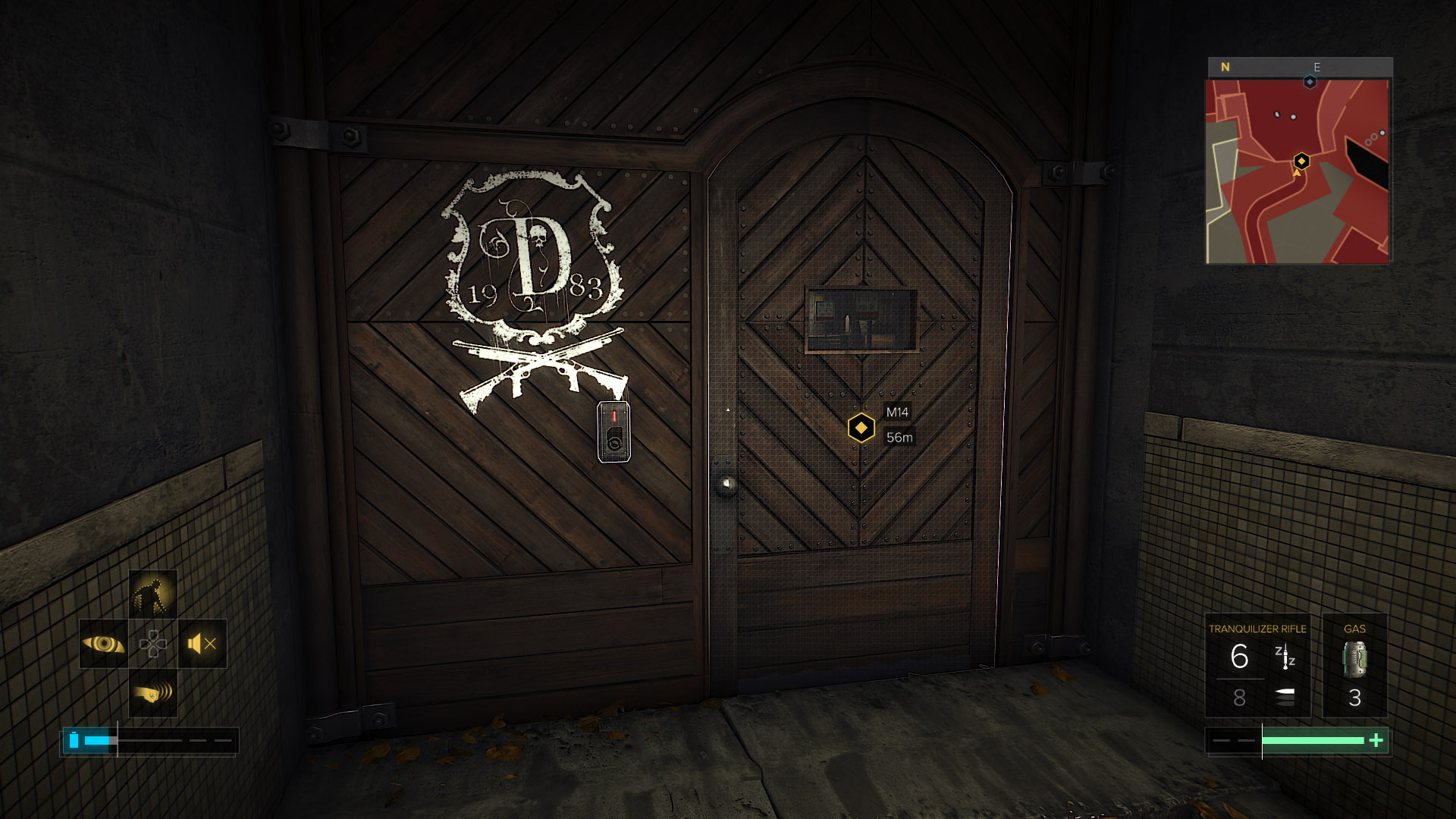 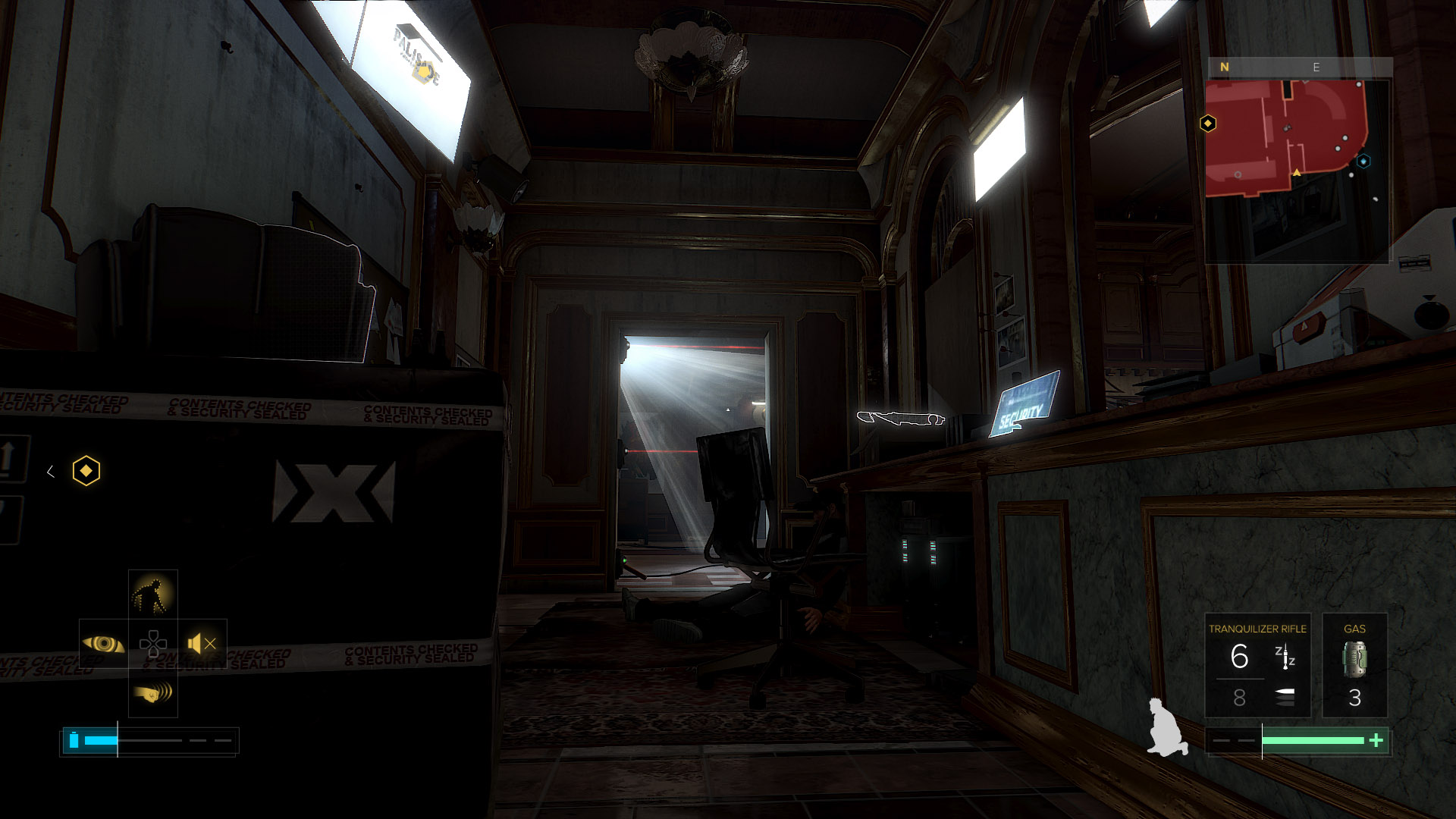 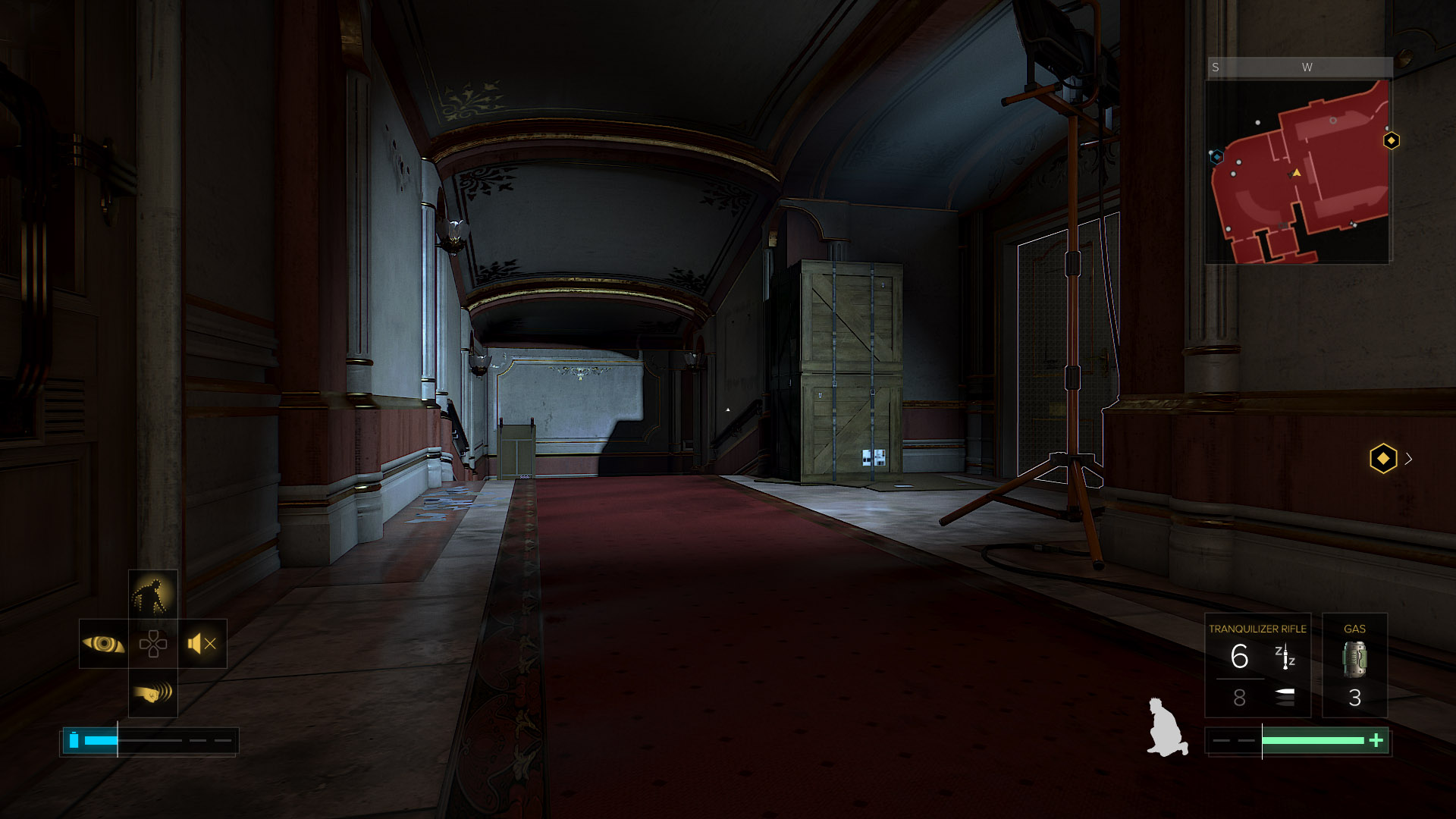 Head out the door from the office, and crouch under the mines. Enter the door to the left, which leads to a large auditorium that is crawling with guards. And the waypoint is behind the main stage. Don't try to to charge the main stage while cloaked. A laser grid blocks the path to the waypoint. You'll have to find a smarter entrance.

Head back to the main doors where you came into this area. A pile of boxes blocks the area to the right of those doors. Jump up and squeeze through those boxes. Watch out for the cameras on the other side. Glass-Shield Cloak your way down the hall, past the cameras and through the door with the hackable lock. You're now behind the stage. Head down the stairs to the right and closer to the waypoint. 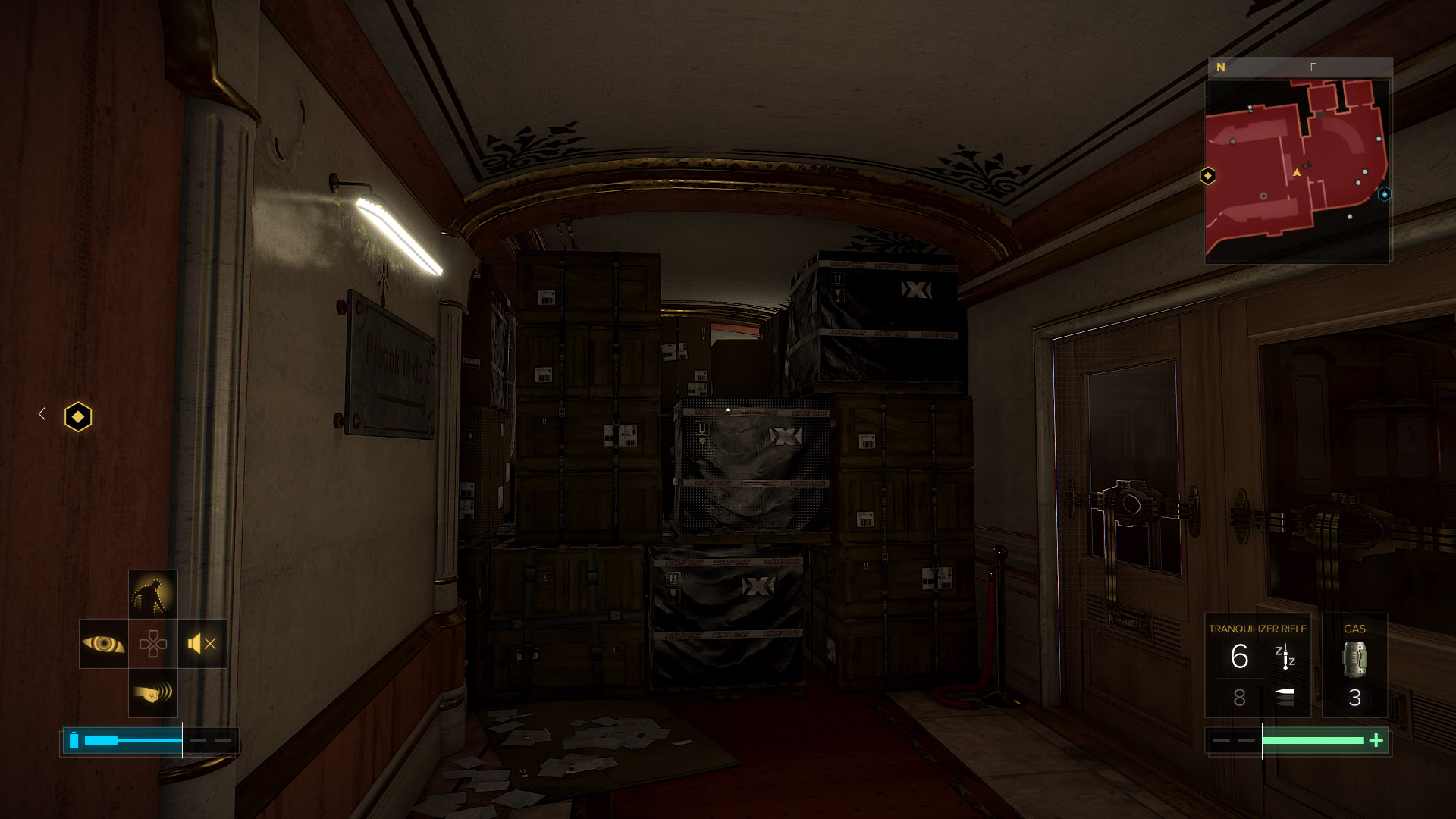 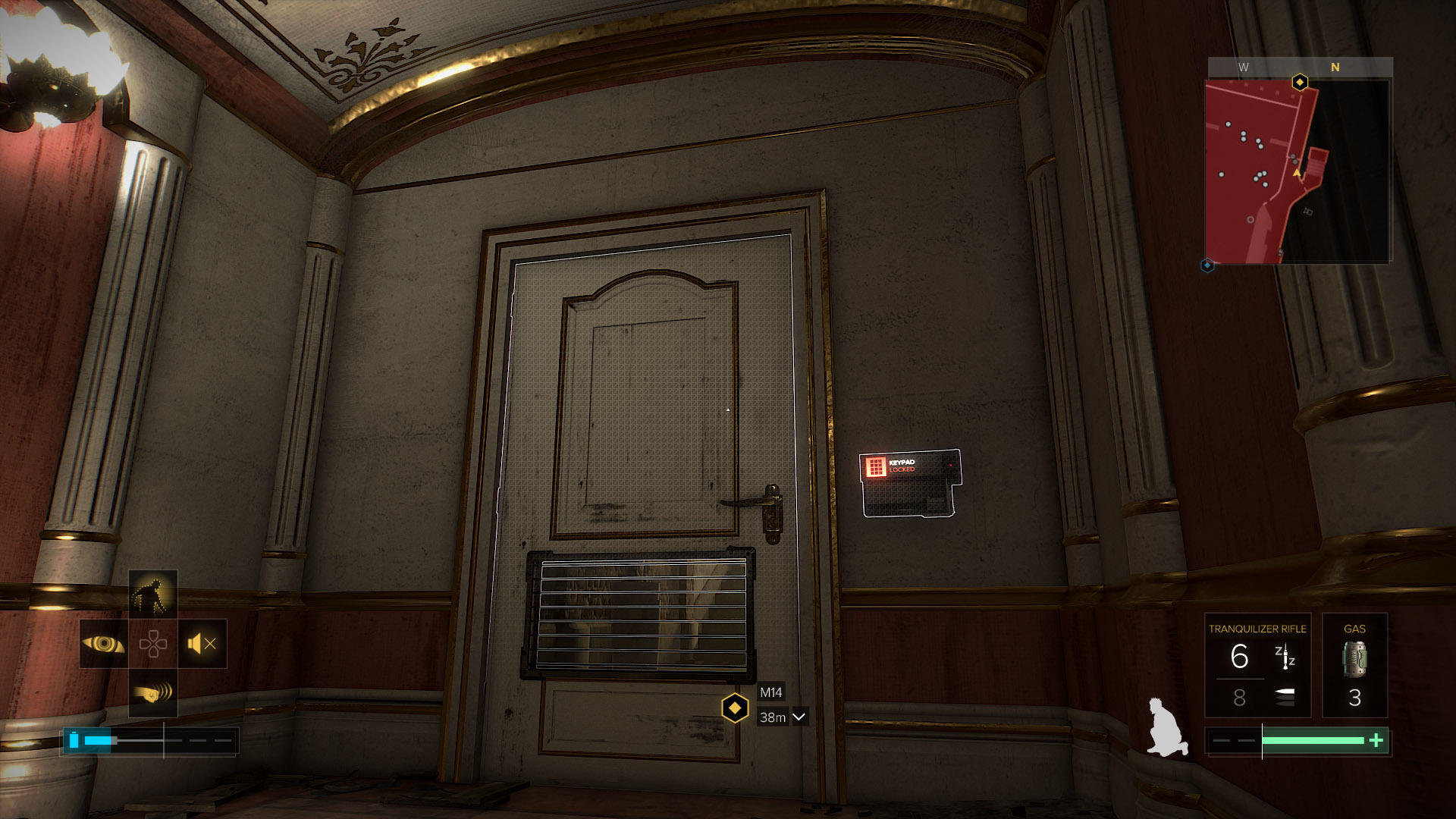 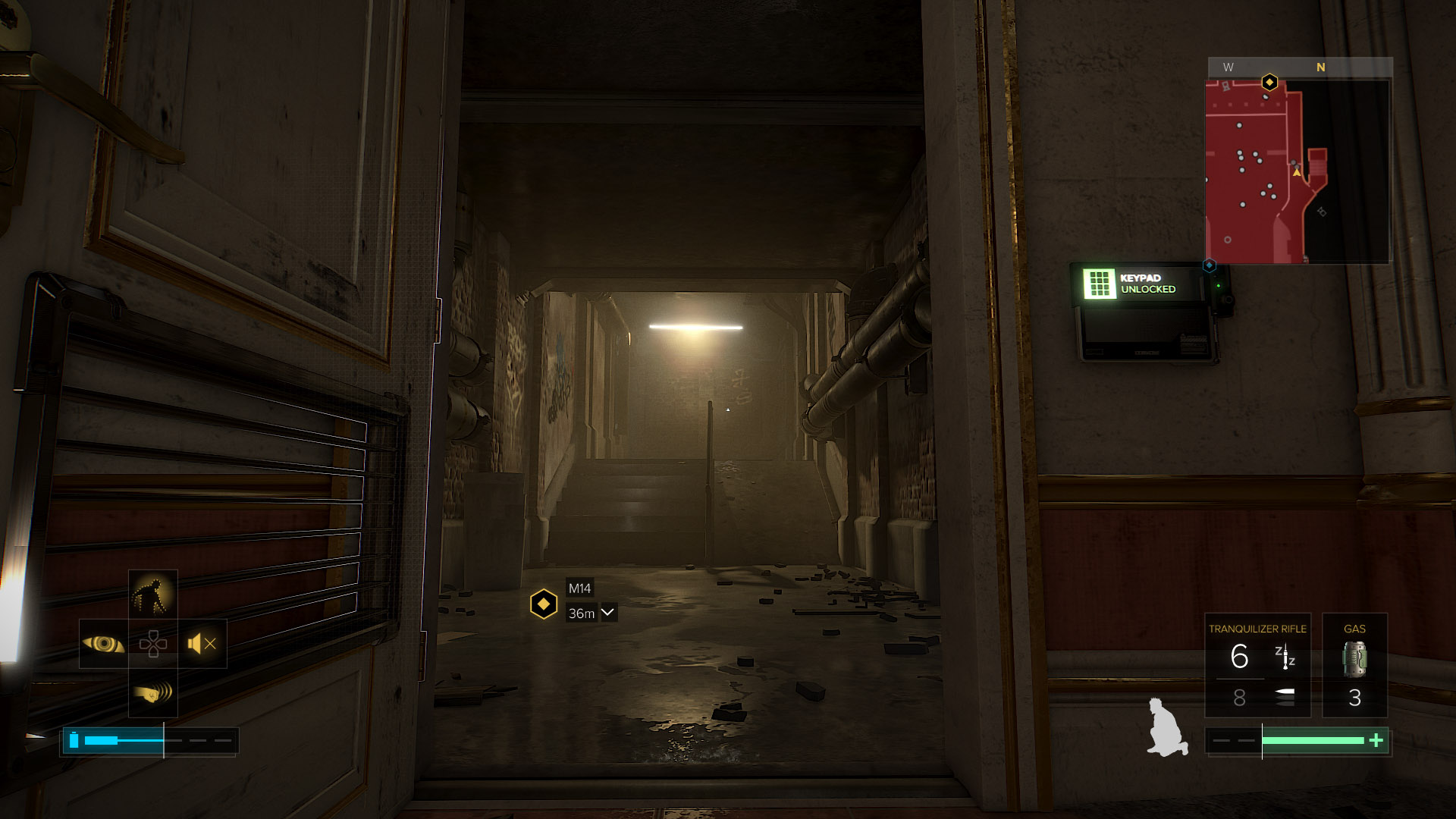 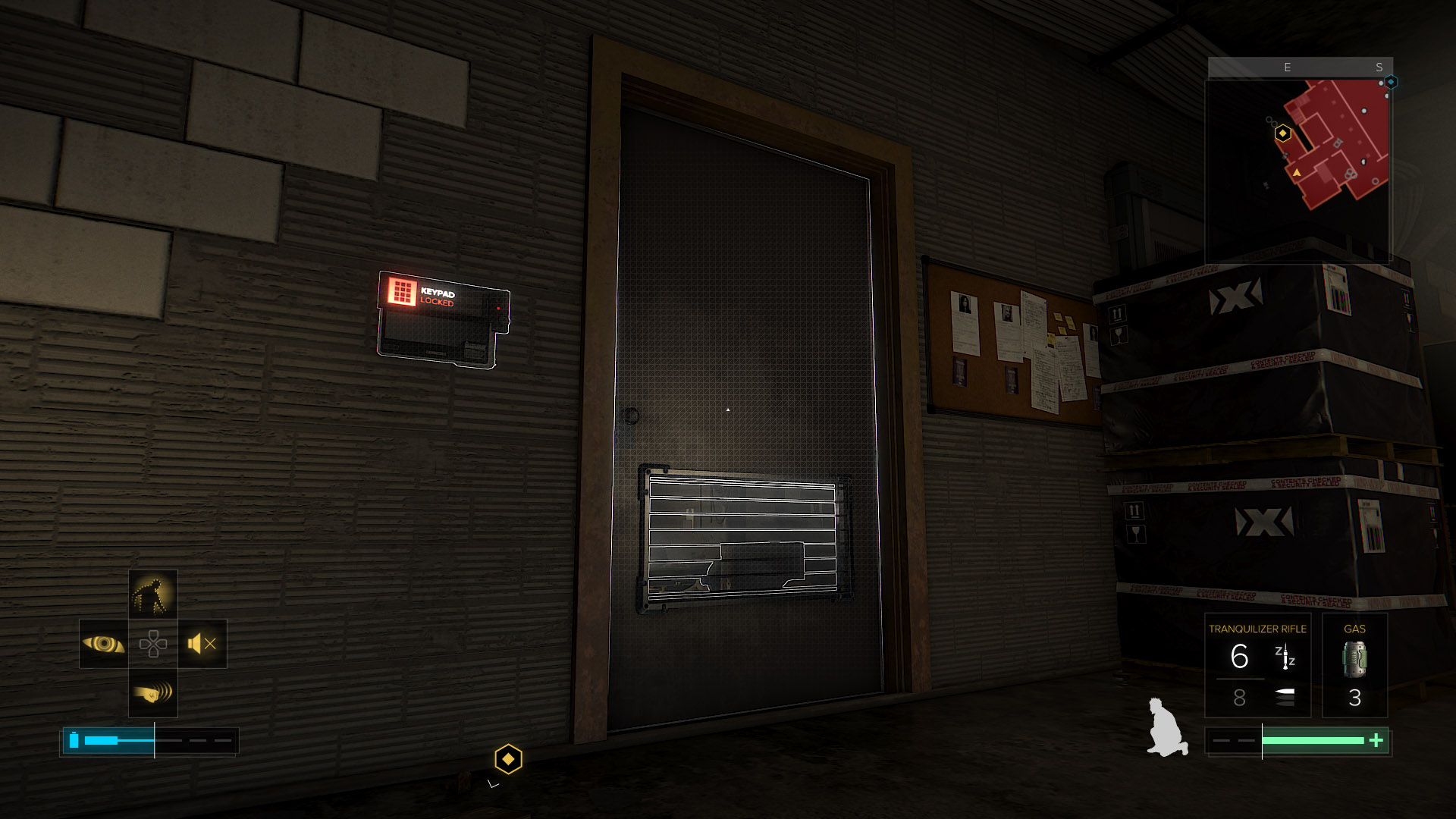 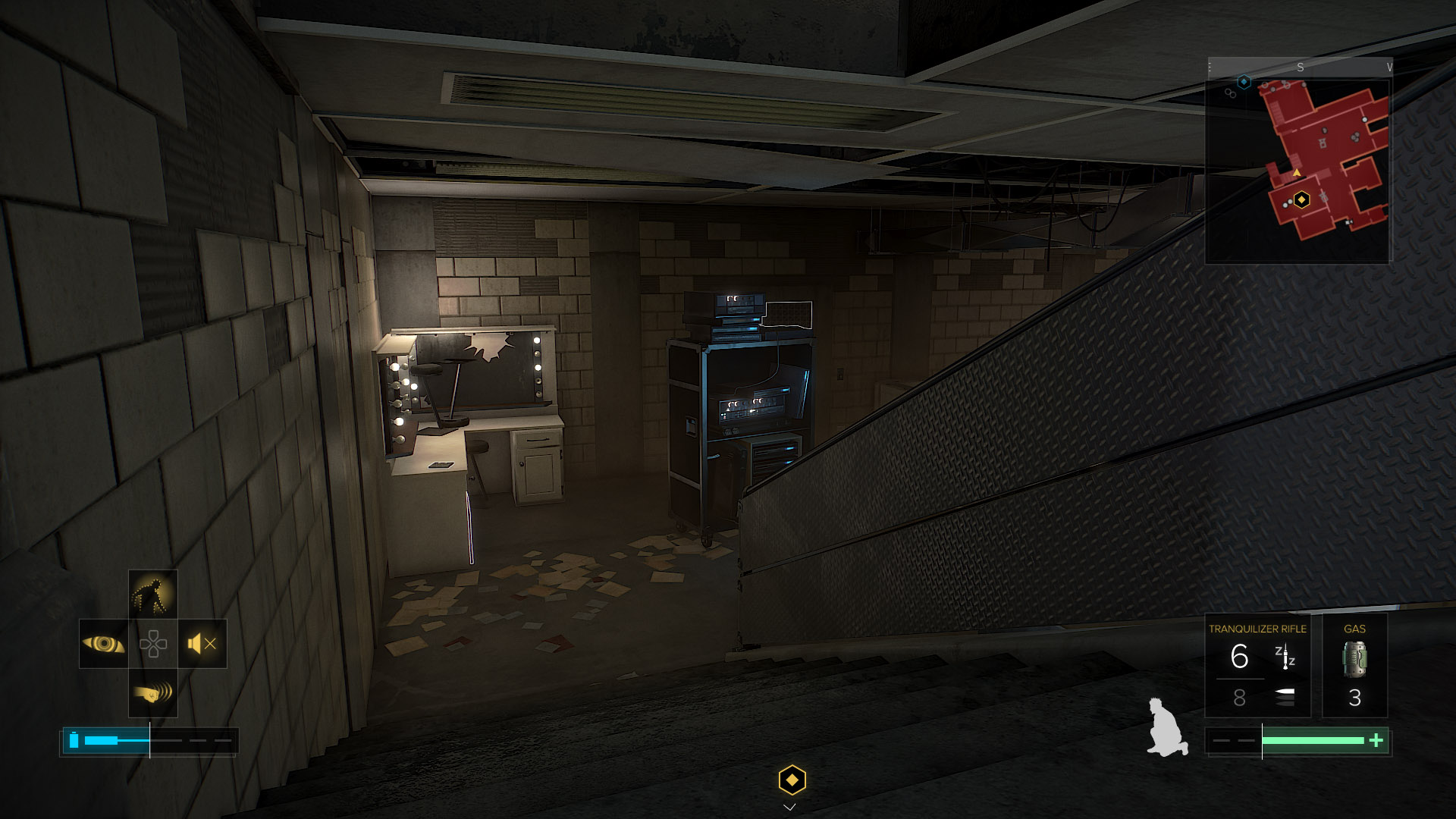 There are several guards sitting at a table. You can slip by them without a Glass-Shield Cloak if you're crouching. Head near the waypoint to trigger the next cutscene.

This gives you more information on a possible future terrorist attack. Now you have to get out of the building and head back to your apartment. It's simple enough. Just retrace your steps. Or you can pop a biocell and Glass-Shield Cloak your way out the front door. Dodge the police forces once you're out of gang territory. Follow the waypoints to the metro. No, the metro isn't running when the streets are locked down. It triggers a cutscene of Jensen walking the rails back to his apartment.

You're not out of the woods yet. You still have to get through the streets in the new area back to the apartment. As usual, stick to the walls and slink by the enforcers. You don't have too far to go. There isn't a secret path that makes it any easier. Just stay on the outskirts of the streets to get where you need to go. Speak to Vega once you reach your apartment. 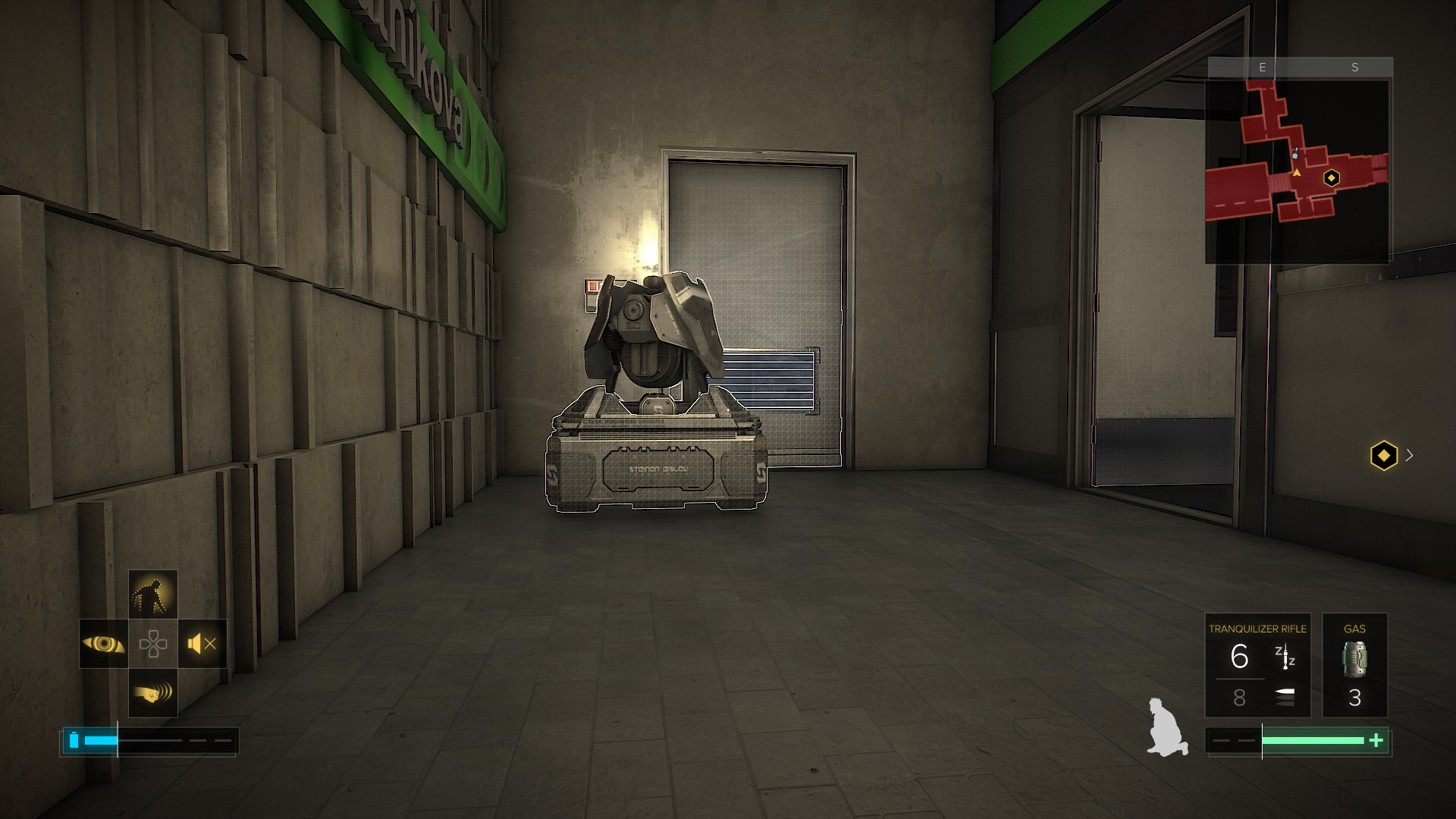 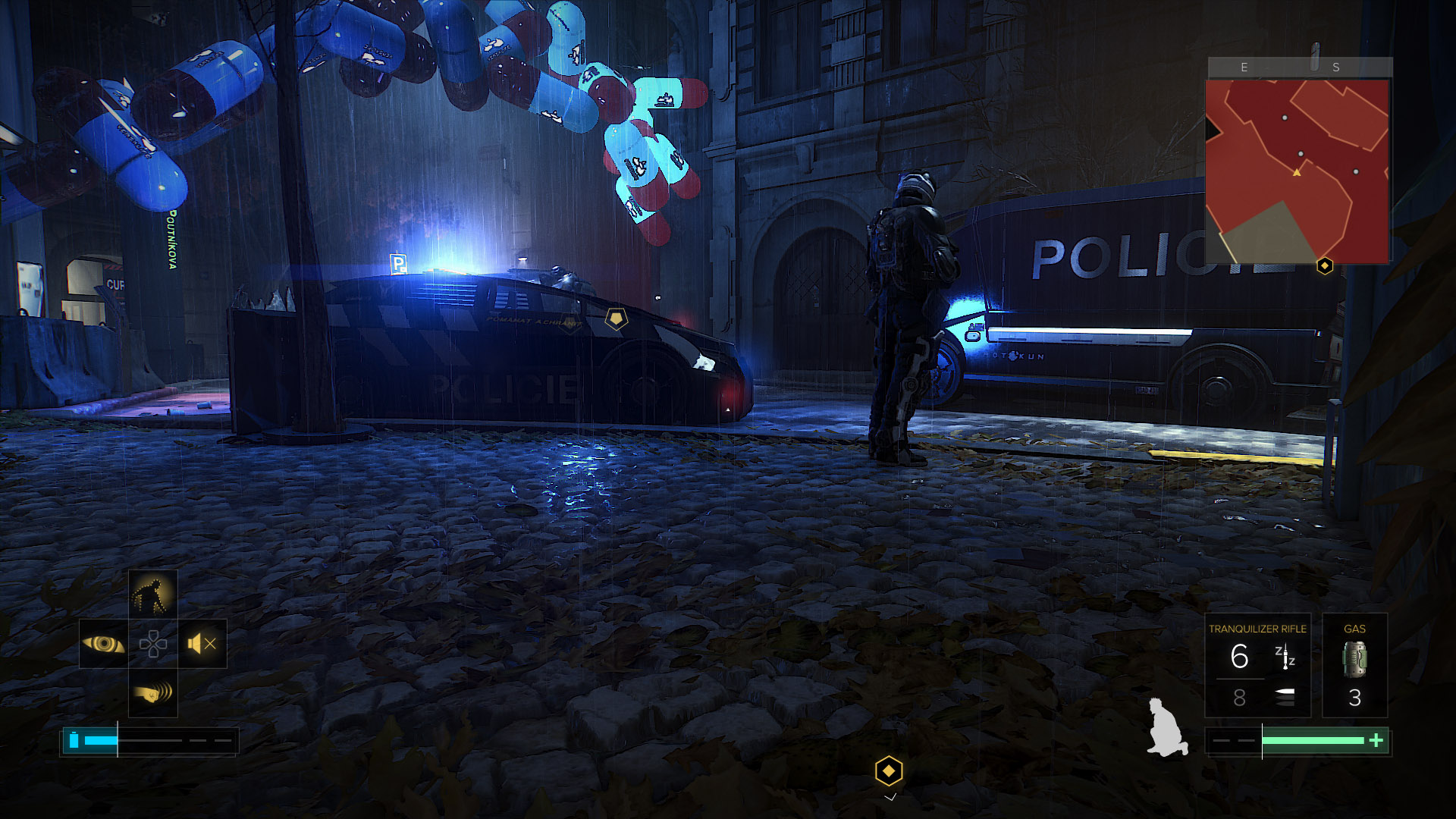 You have to get back to the bird to take you to a new area. Of course, that means more sneaking around the streets. You have to go the exact same place you just came from: the metro. Sneak back down there, and head to the new area where Miller is waiting with the plane.

There’s a turret guarding the entrance to the metro once you arrive, but it’s not guarding where you’re coming from. Simply pick it up and face it against a wall. Problem solved. Once you’re topside, stick to the right side of the streets. The left side is a no-go. Crouch your way to the waypoint. As usual, stepping onto the plane will cancel any side quests.