Follow the waypoint and speak to the guard at the glass. To trigger the next cutscene. Choose to trick the guard, and he'll leave his post. Don't attack him. Everyone will open fire, and you'll be dead in seconds. 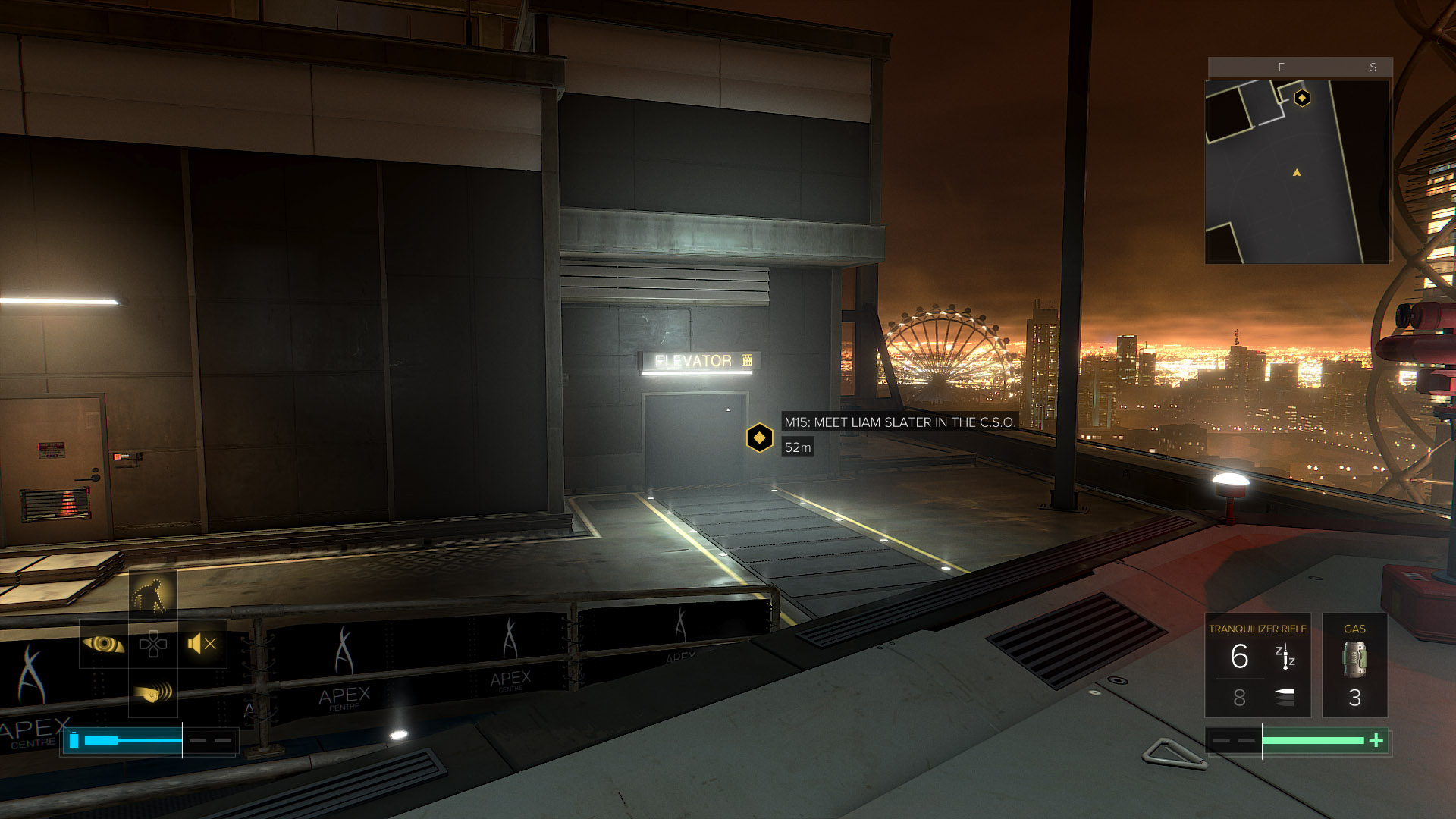 There aren't a lot of areas you can go to in here because everything is heavily guarded, and there are cameras and laser grids everywhere. Search until you find two vending machines. Move them out of the way to find a vent. Crawl through the vent until you find an opening that leads to yet another vent. This will take you farther into the restricted area. 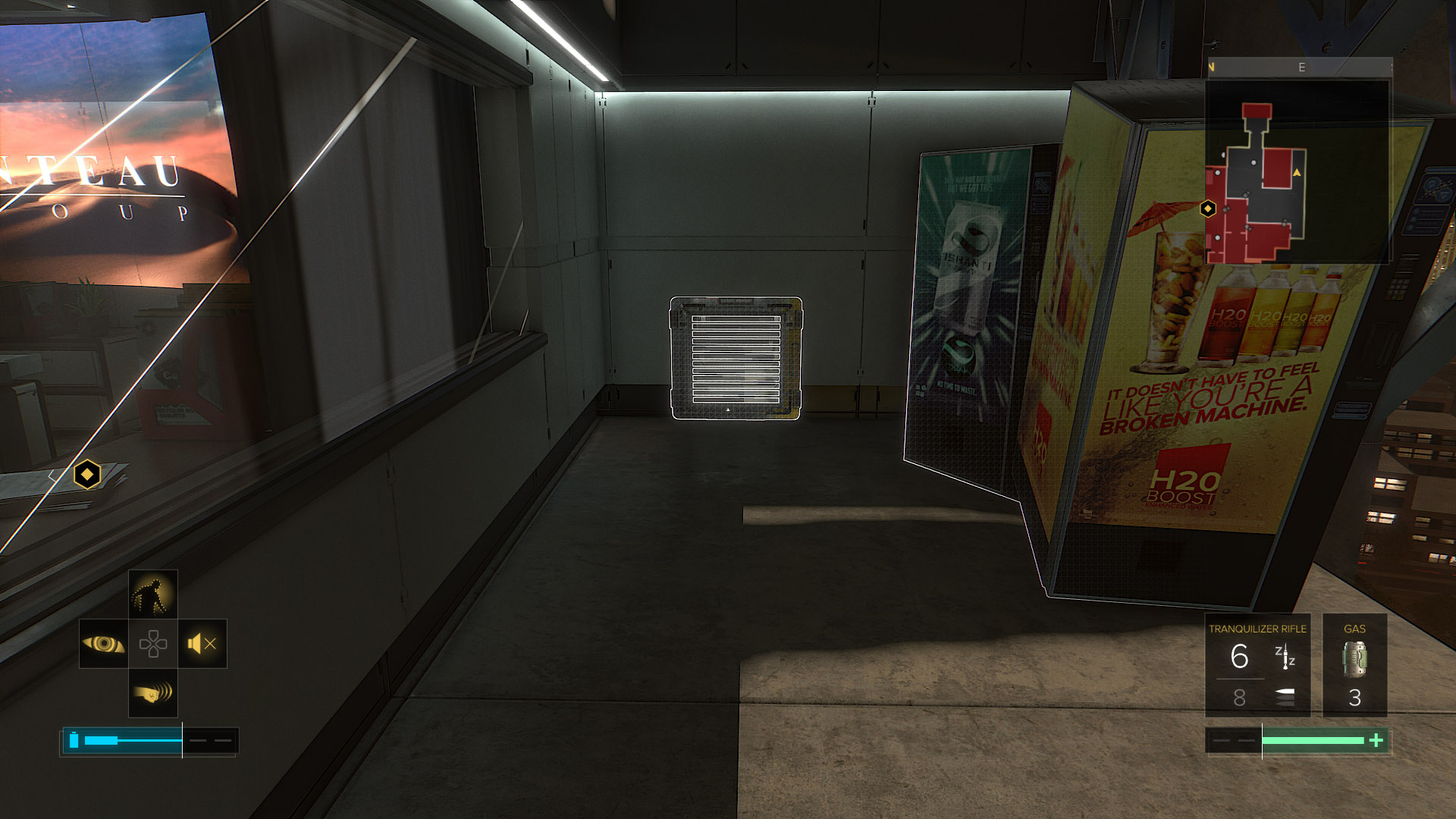 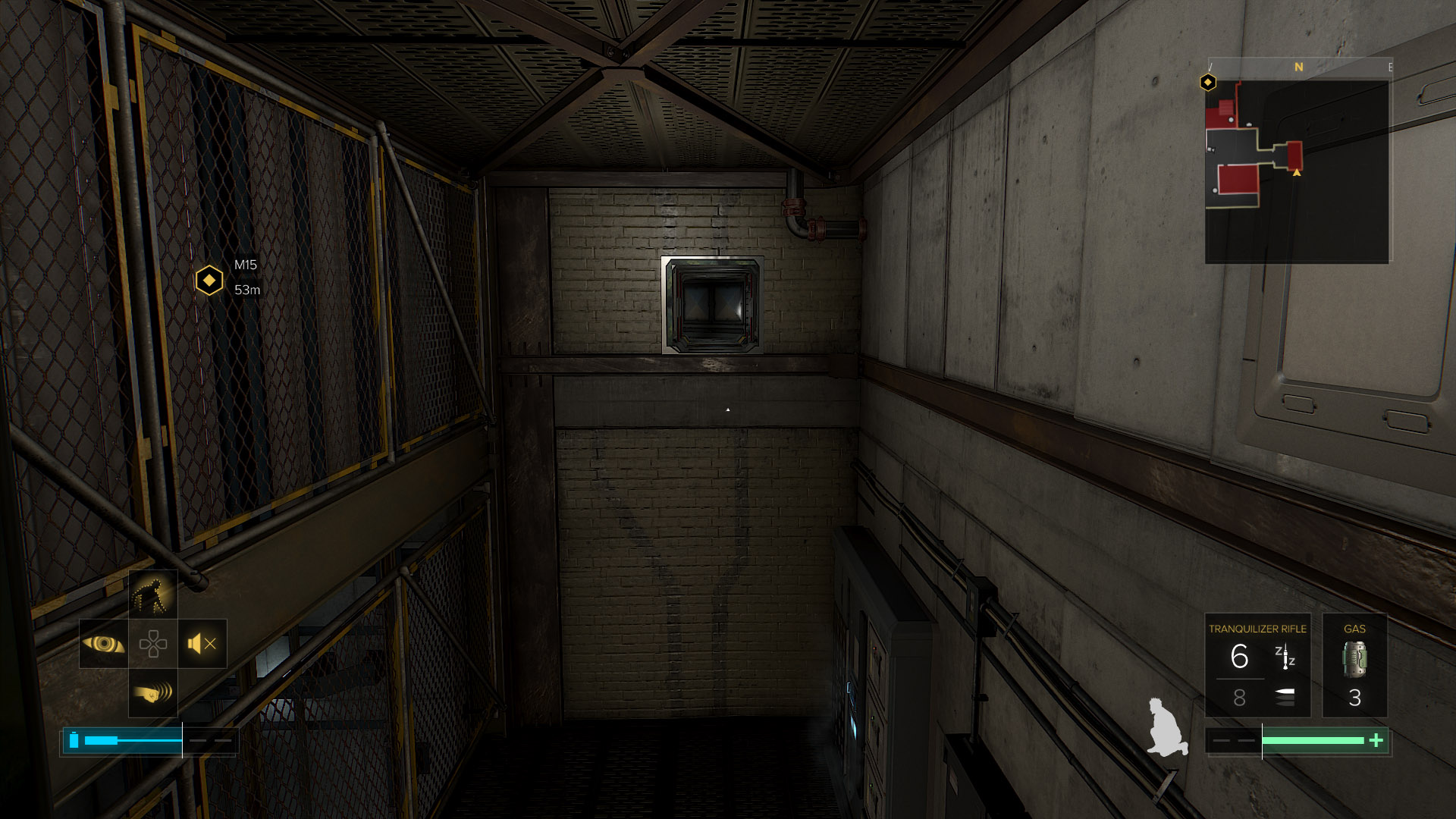 Slip out of the vent with the help of your Glass-Shield Cloak and head straight across the room into the door that leads to a closet. There's another vent in there that will take you exactly where you want to go. Head through the office that is right in front of the vent exit. Open the door on the other side. Put on your Glass-Shield Cloak, and book it to the staircase. Crouch down once you're at the top of the stairs. Wait until the guards stop their conversation. Head to the door past the columns that look like servers. You'll be able to safely hack your way in. There's a security laptop inside that room. Use it to disable cameras and laser grids. Now you can make it to the right at the top of the stairs you just climbed. 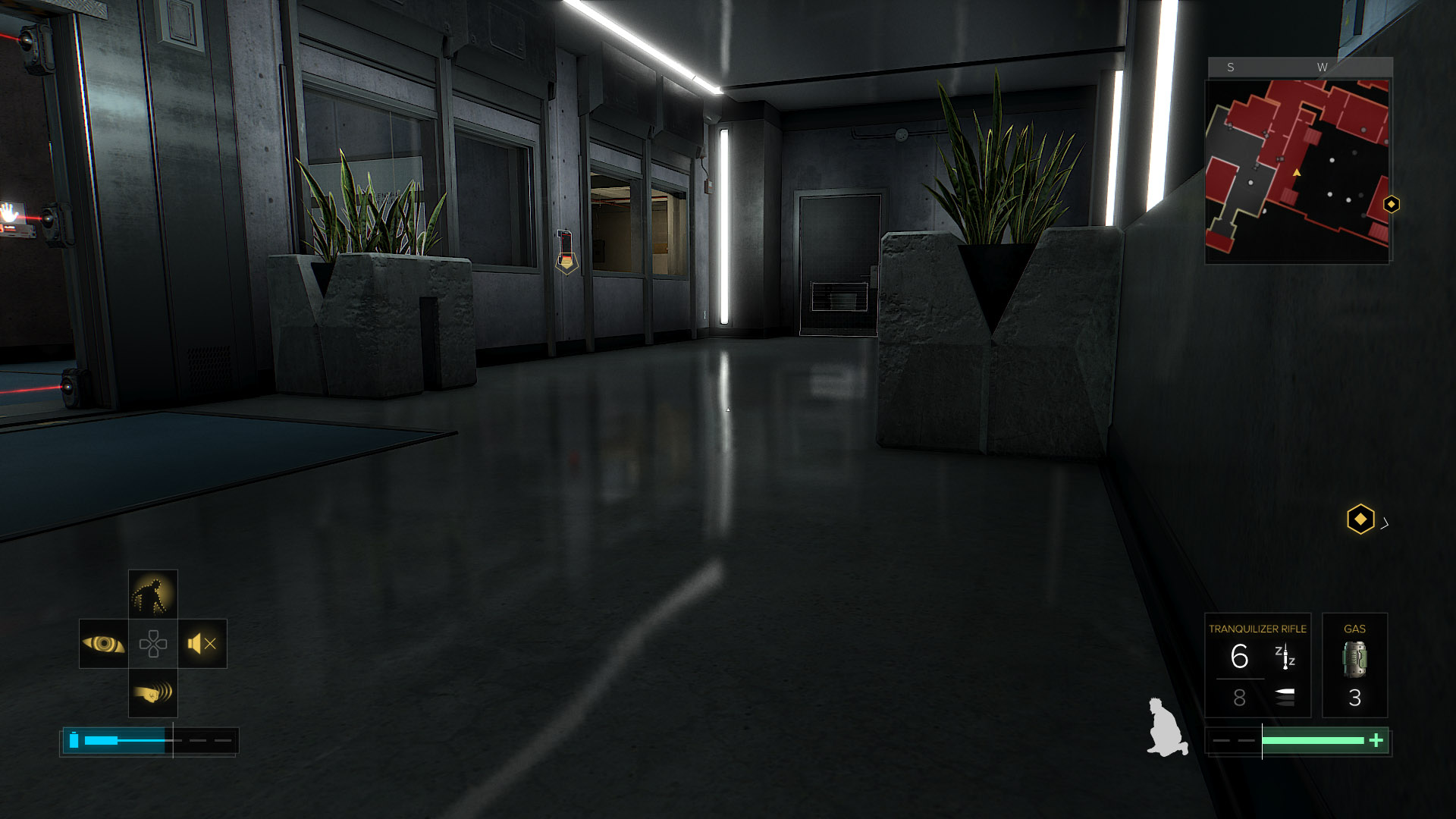 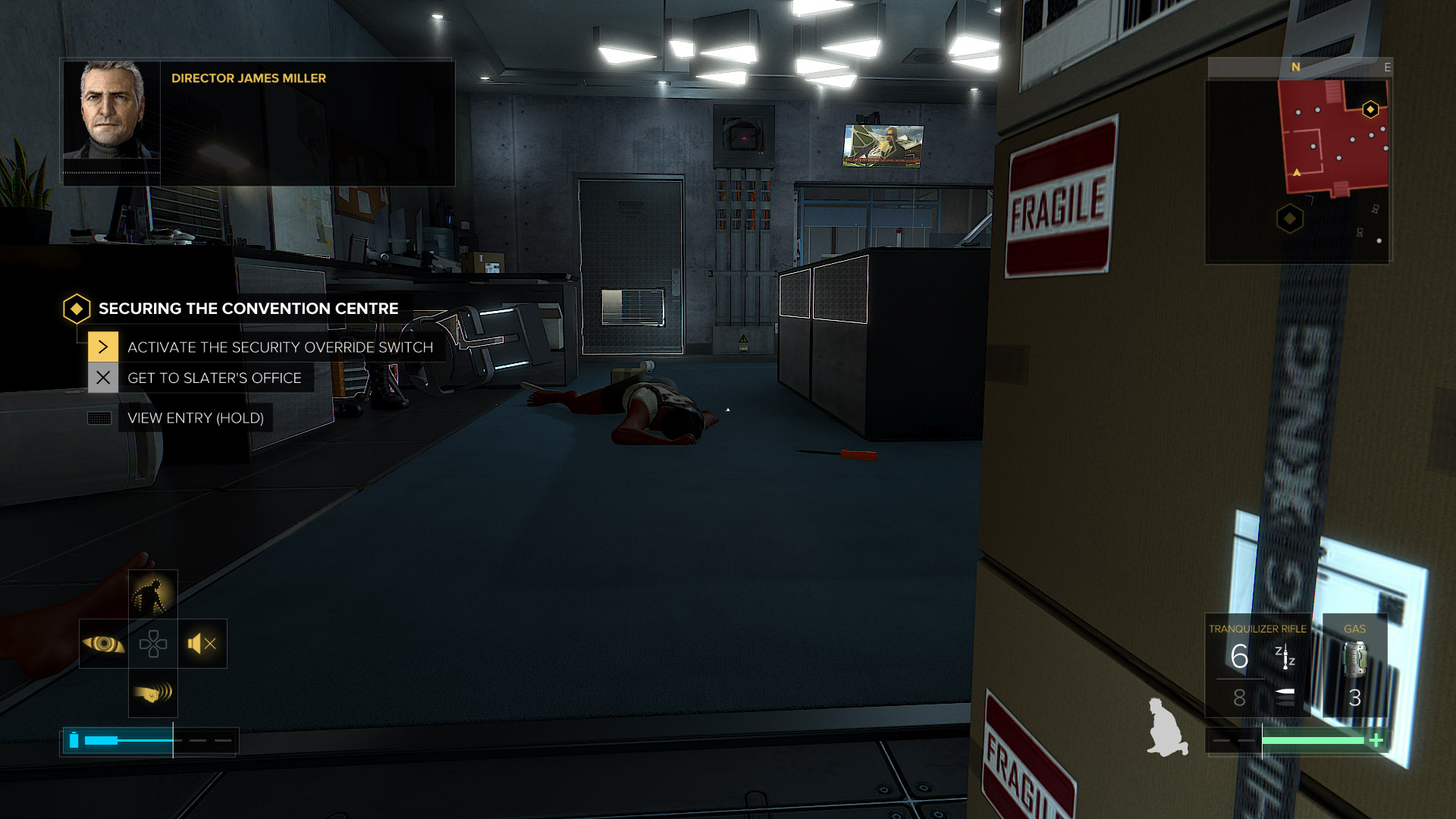 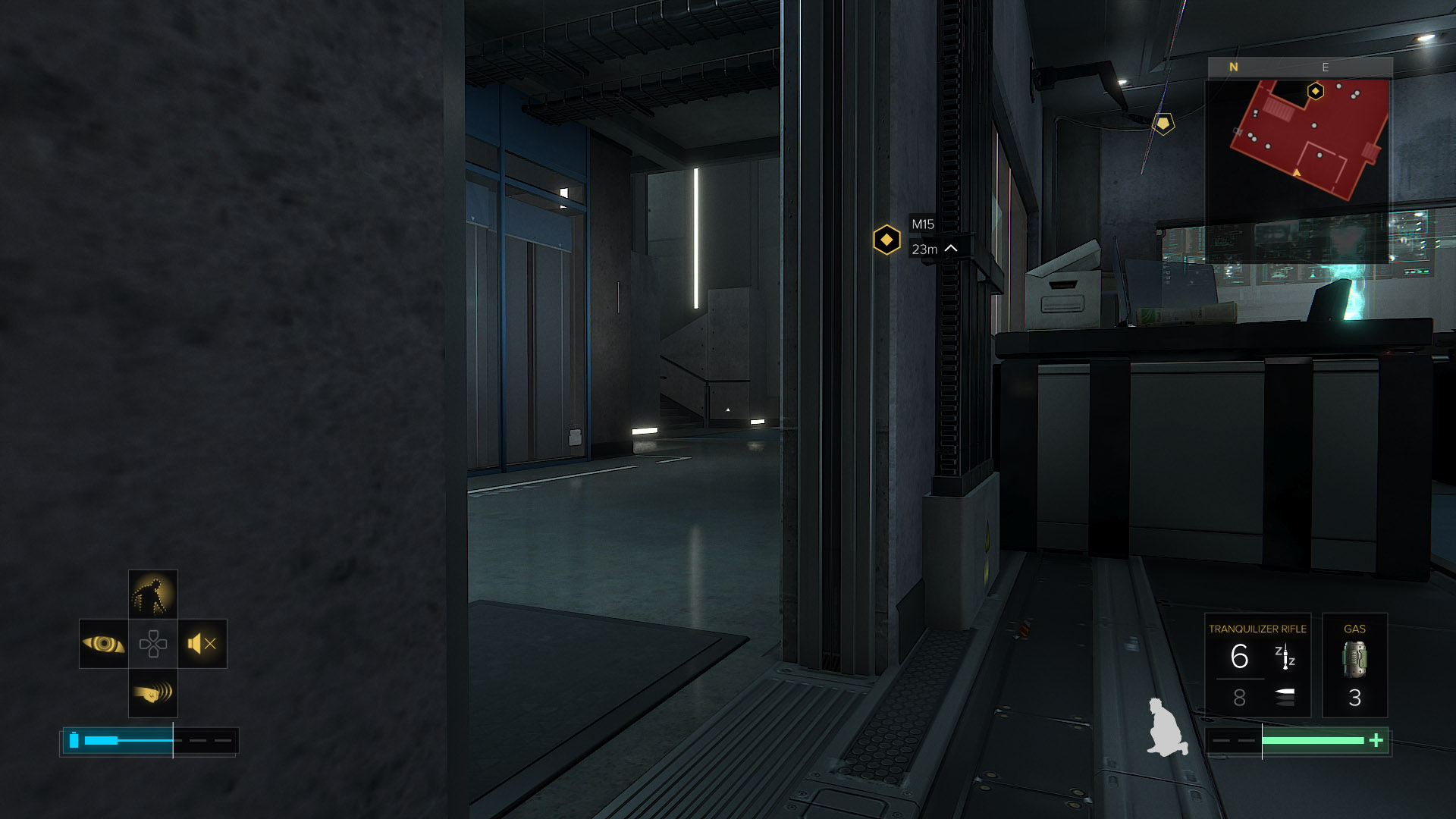 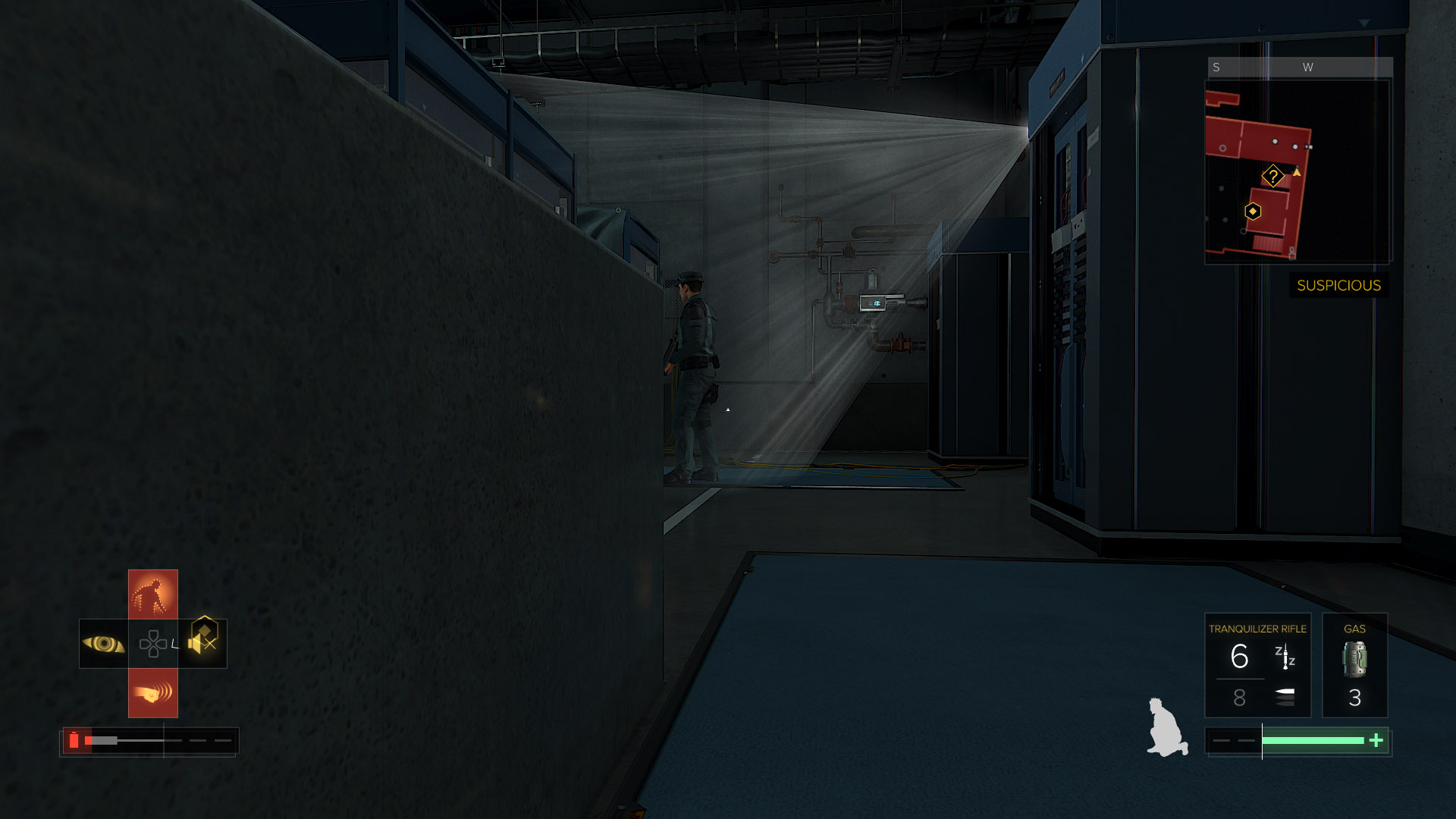 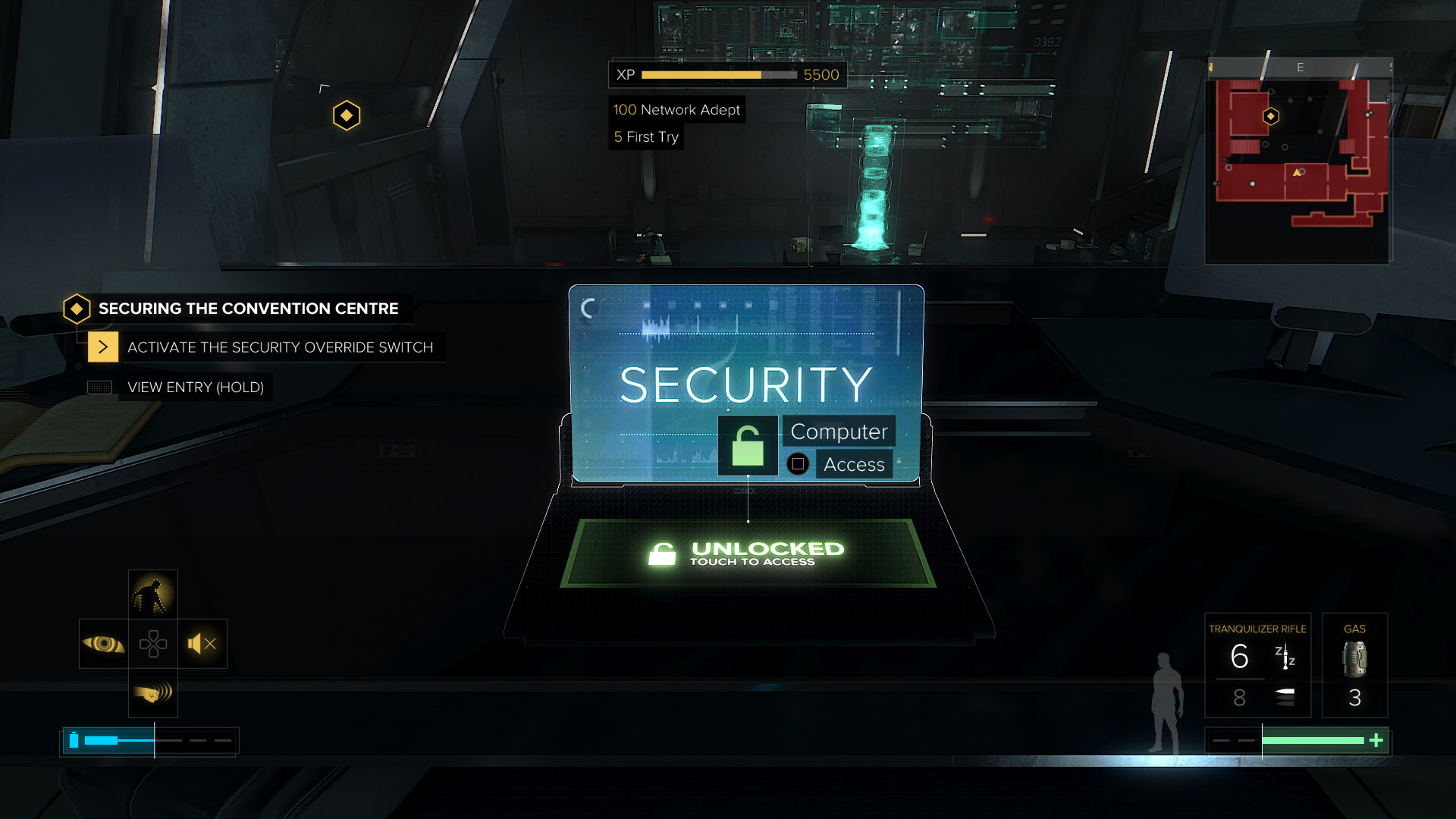 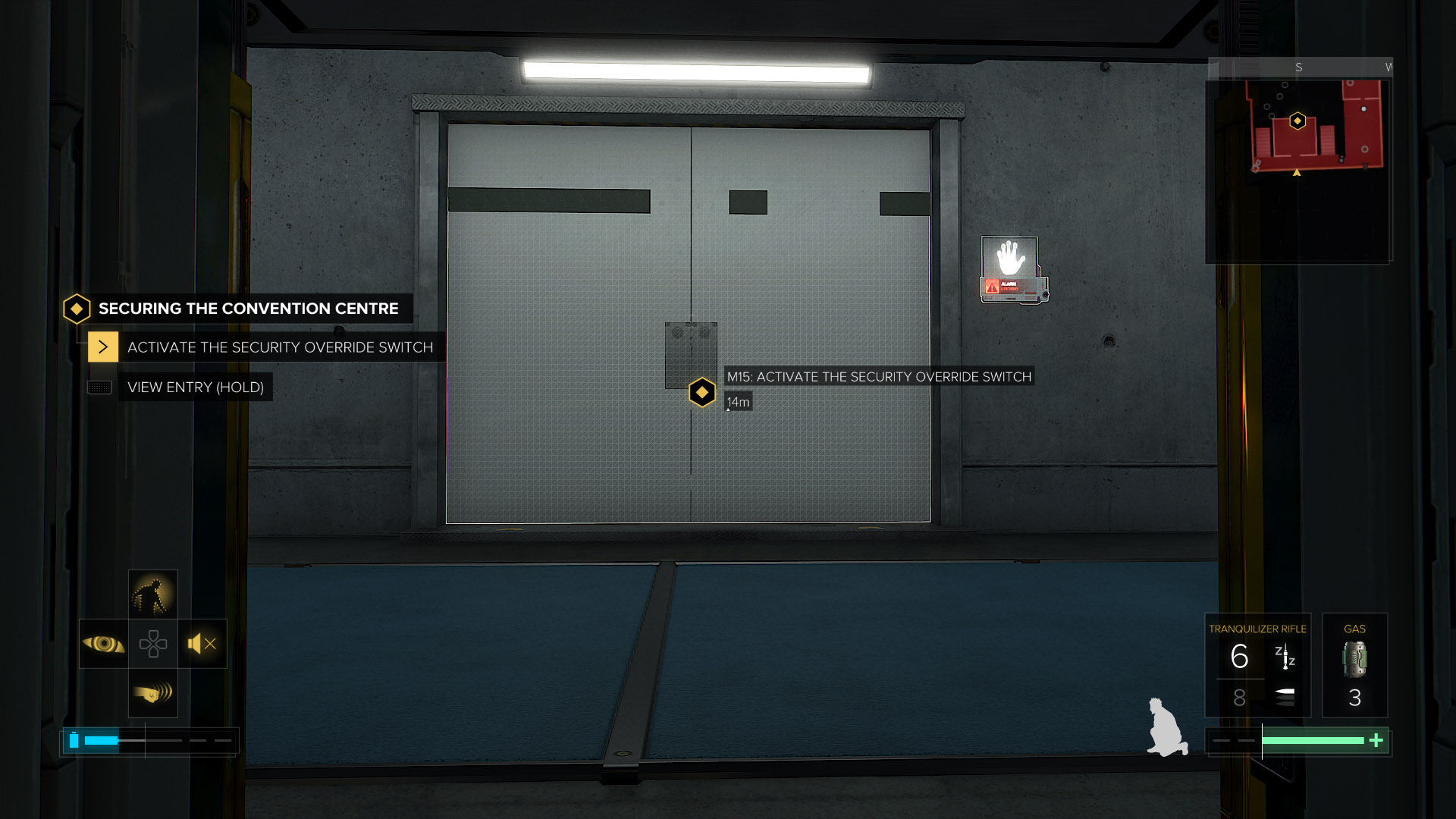 Head that way and reach the door at the waypoint. There's no hacking involved, so just go right in. Once you're in the office, hack into the terminal. It's a level 1, so it's pretty easy. After a quick cutscene you'll have to head out of the room and make your way to catering. Again, it's not as difficult as it seems. Just retrace your steps, and head to the elevator where you came in. This time, take the elevator down to reception. Now you get to have some fun.

There's no way to tell which guard has the keycard, so Miller instructs you to take them all out quietly. If you get caught once, the alarms will sound, and Viktor will know you're snooping around. Be sure to save after you take out each guard. It will make failure easier on you.

Guard 1: He's easy. He's by himself at the beginning of the area, and the camera stays off of him for long enough to knock him out, hack the door and stash the body. While you're in there, darken the windows with the EG Switch, and hack into the security laptop. This will shut down all the cameras. 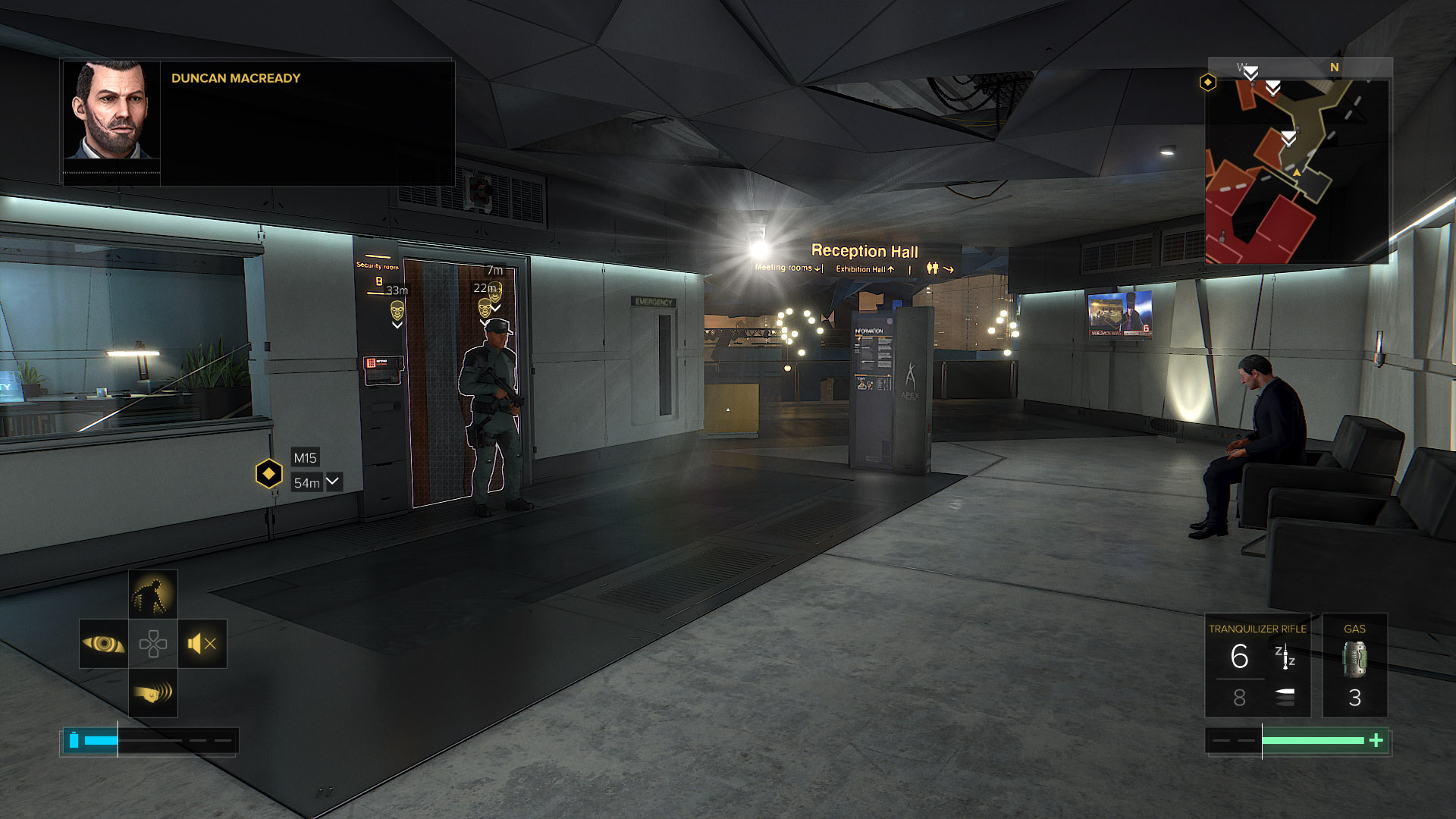 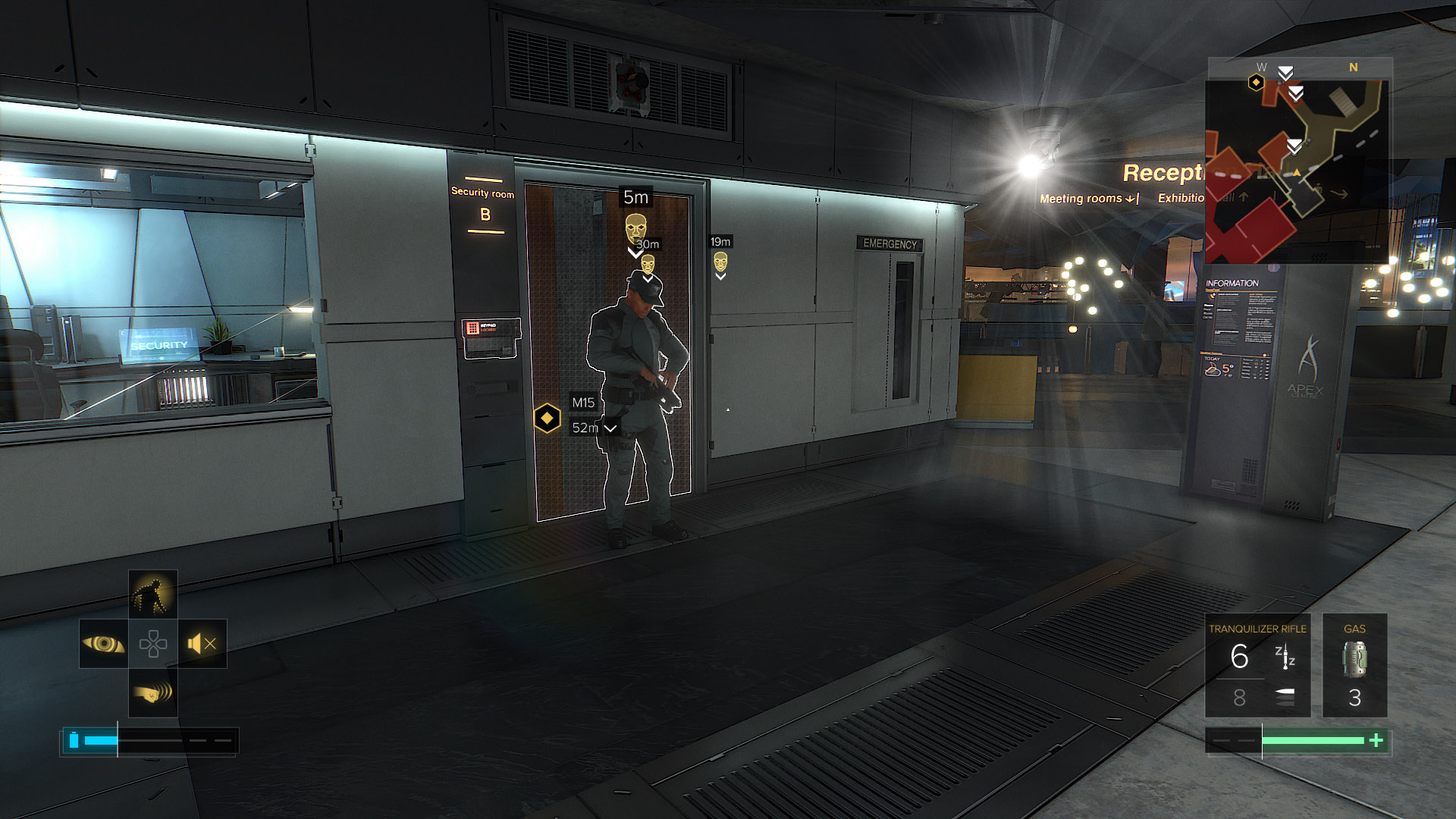 Guard 2: Check under the desk to find a vent. Head through it. Go all the way until you come out on an end with a shut door on your right. Don't open it. Instead, crouch down the steps to your left. Two guards will have a conversation. Take one out when they separate, and drag the body into the vent to hide it. 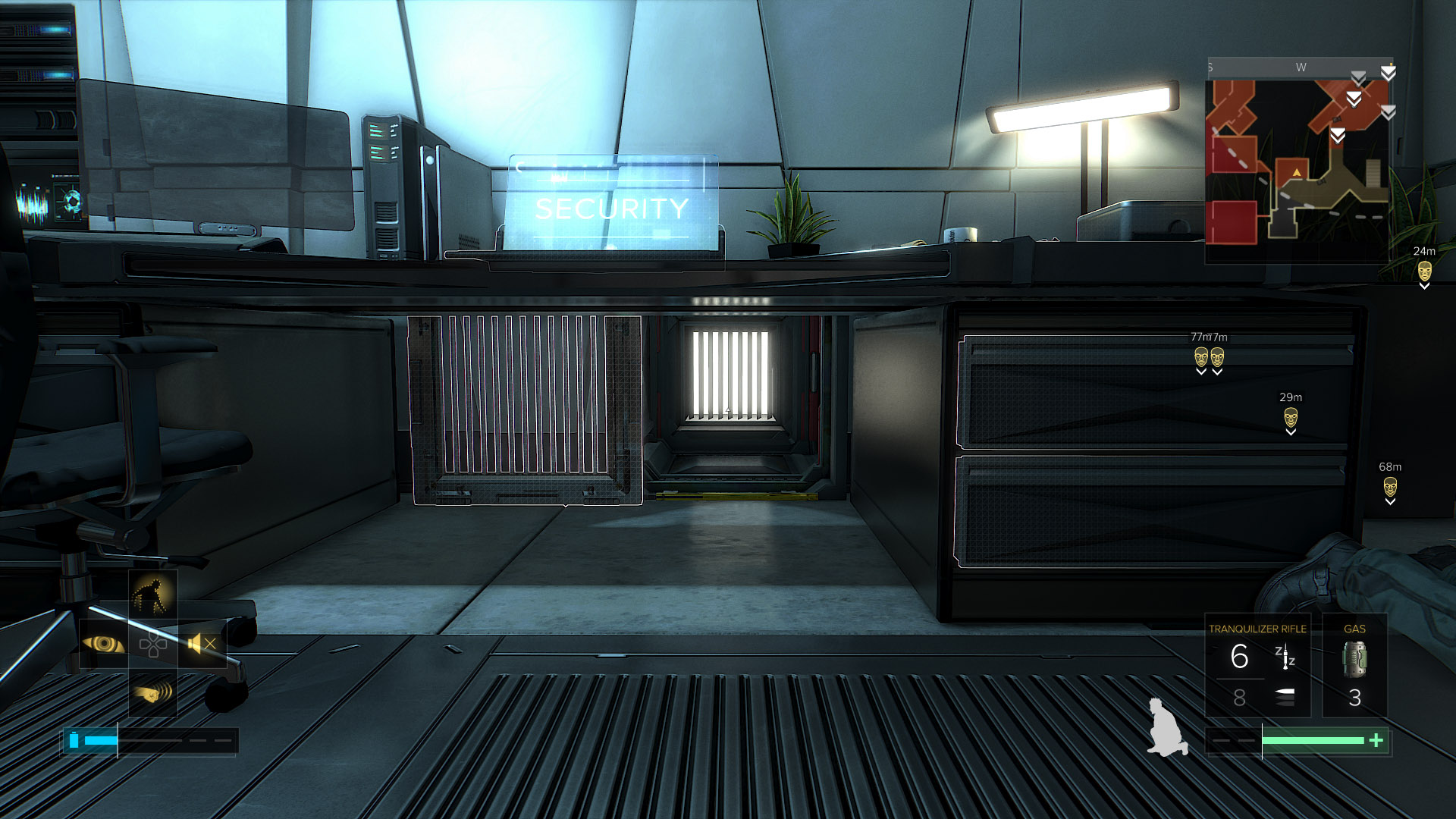 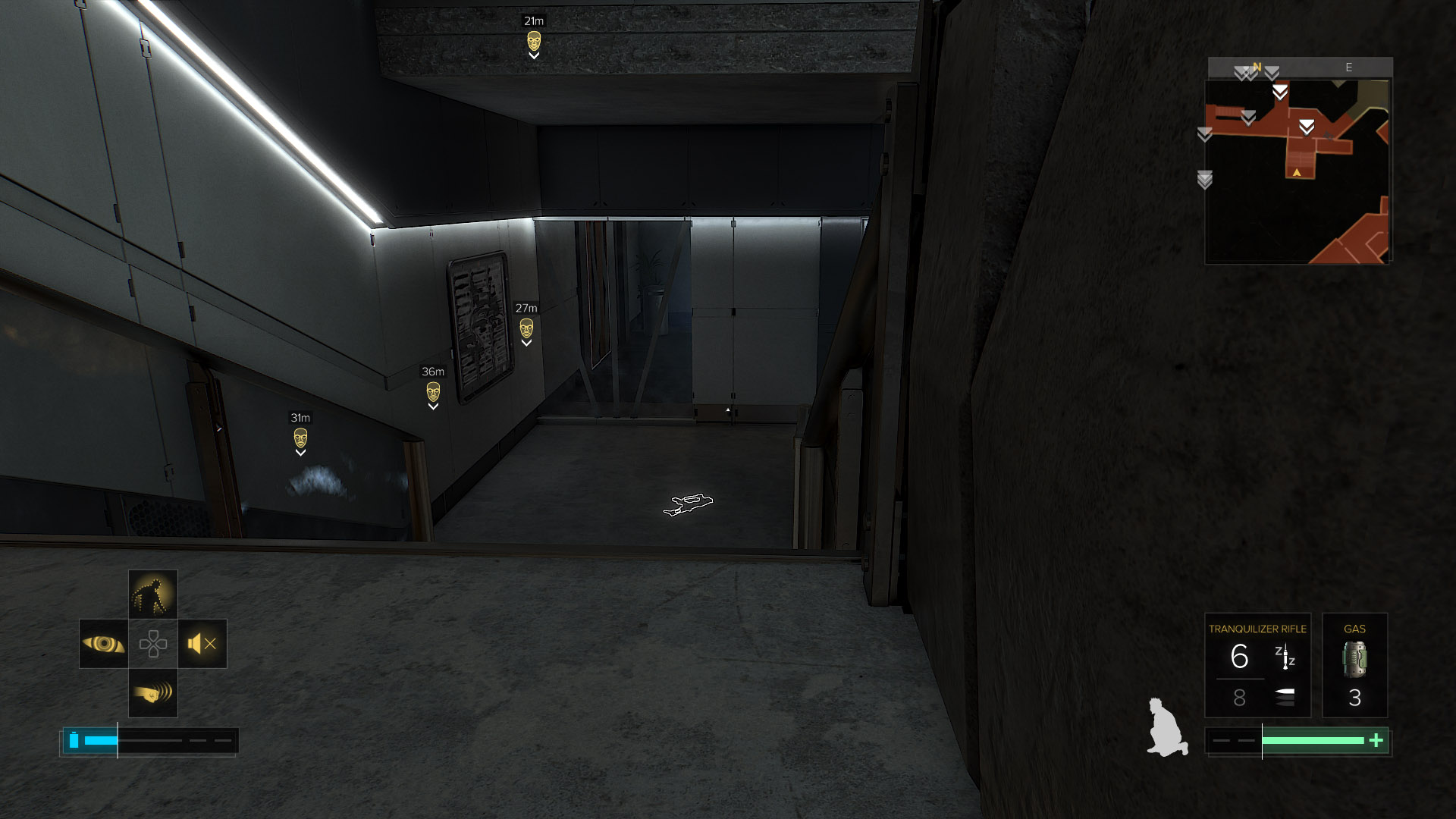 Guard 3: Now head back up the stairs, and open the door. There's a guard with his back to the door on the other side. You're going to take that one out, but be careful not to alert the other guard who is walking back and forth in the same area. Wait for him to pass, open the door, knock him out, and drag his body back into the vent. 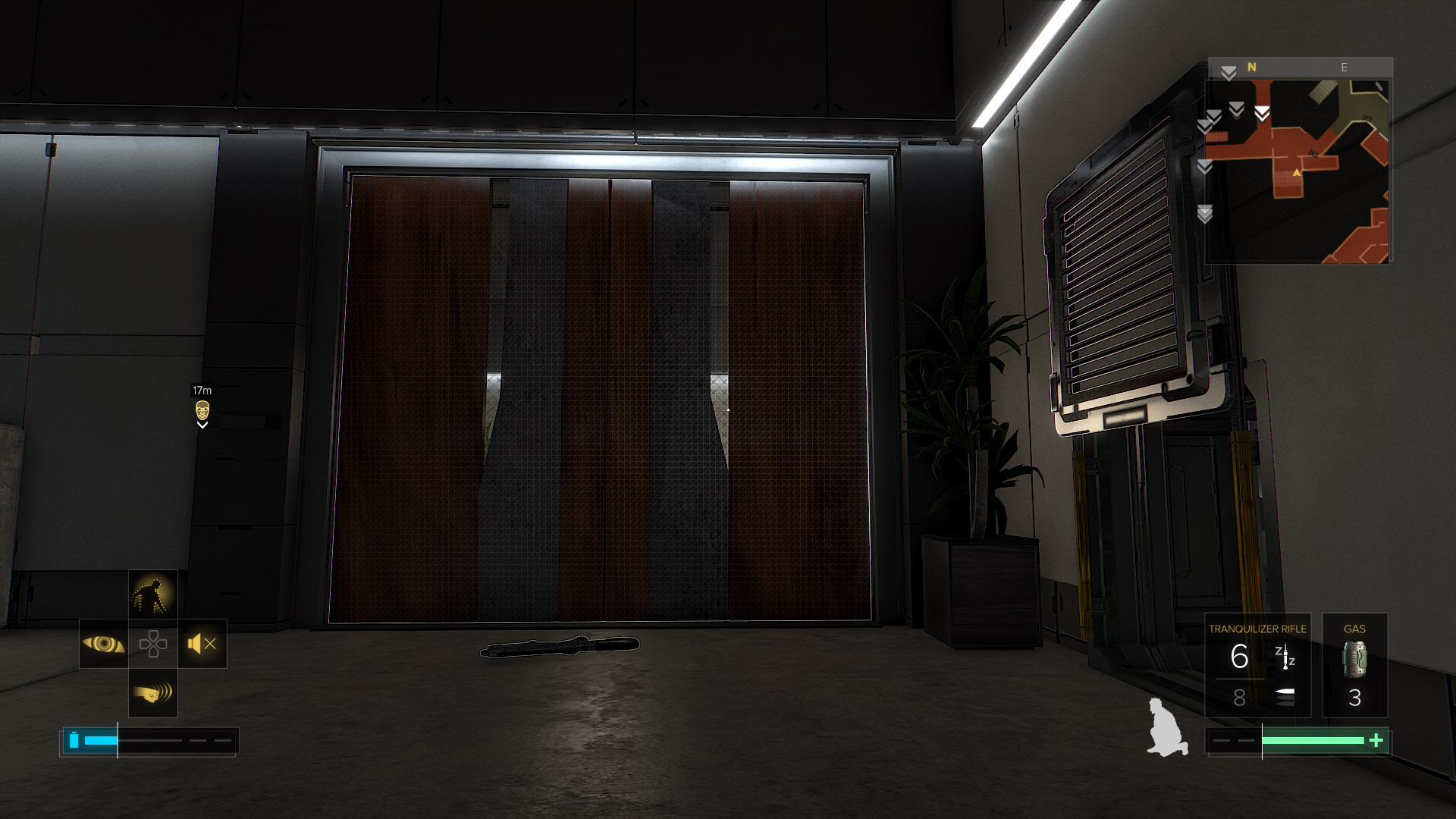 Guard 4: Now target the guard that is walking back and forth in the same area. Then drag him back into the vent. It's getting crowded in there.

Guard 5: Head back down the stairs, and break the structural weakness on the left wall. Climb through the hole you made, and open the door. Peak out to lure a guard into the room. Knock him out, and keep his body in there.

Guard 6: With Guard 5 out of the picture, you can walk out the door and there won't be any guards nearby. Head out that door and down the stairs to the left. You're now out of the restricted area, and you can walk around freely. There are guards mingling around with the citizens, which makes it difficult to do your job. There's one guard patrolling the Safe Harbor sign. He's easy. Wait until he stops moving. Take him out, and drag the body back to a corner. 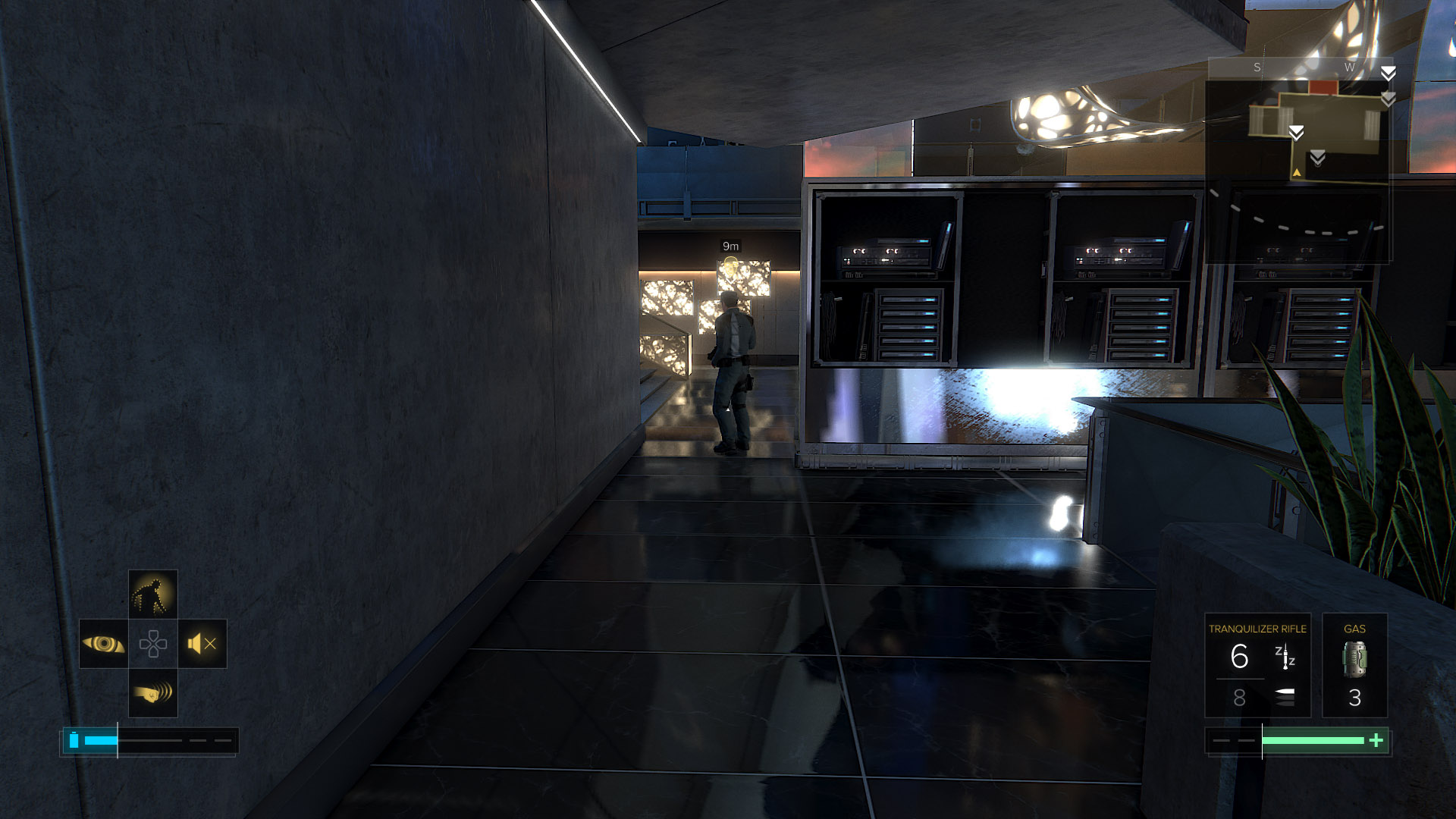 Guard 7: Just below that area, there's a guard standing by a couch. Wait until nobody is around and knock him out. Drag the body behind the couch. 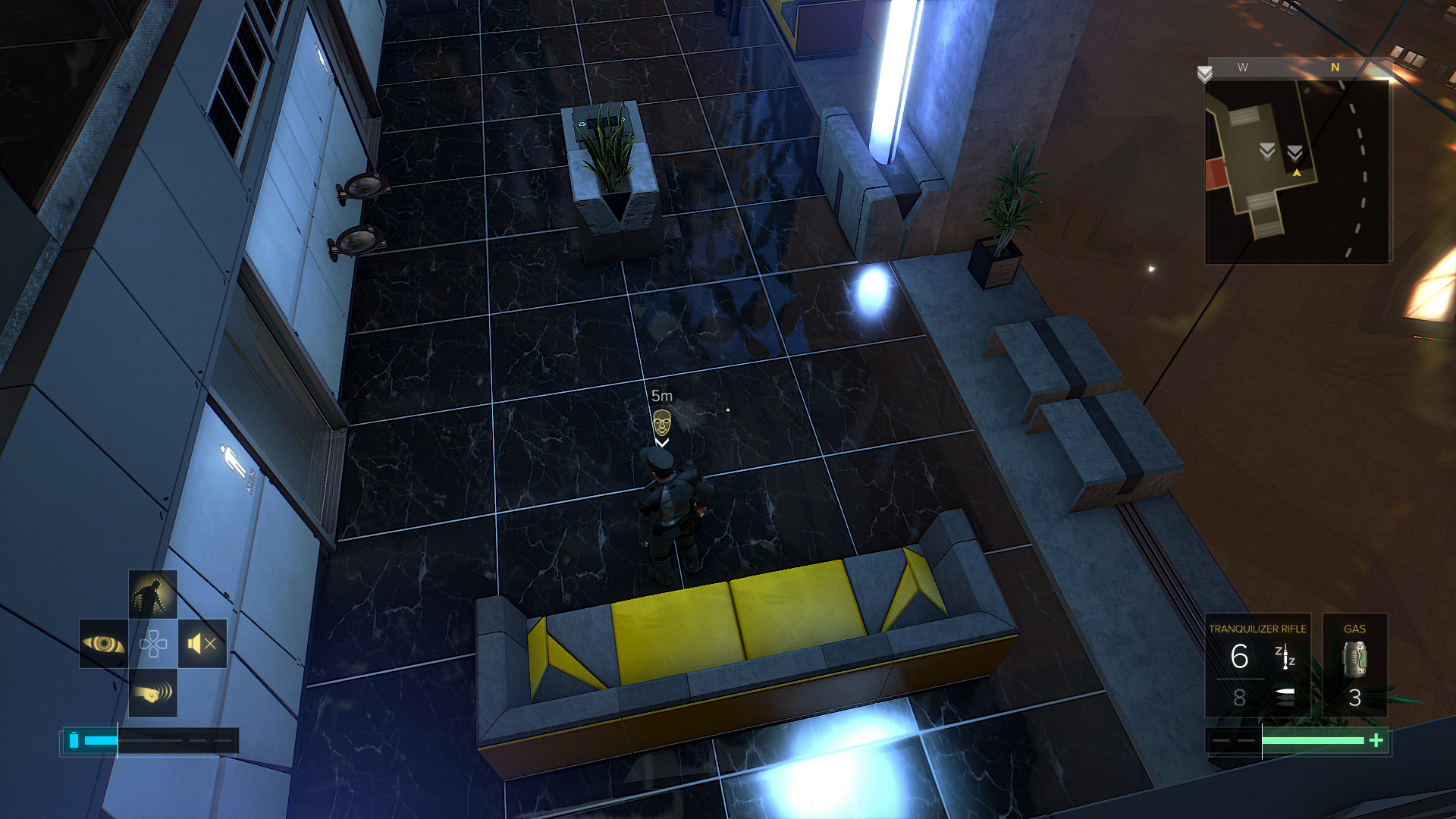 Guard 8: There's another guard who keeps patrolling that same area. As one does, he goes from the bar to the bathroom and back again. Wait until he's back at the bathroom, and take him out. Stash the body behind the same couch as Guard 7. This is the one with the keycard. Be sure to search him.

Guards 9 and 10: There are three guards left, and they are all back in the restricted zone. Head back up the stairs where you came from to get back in the restricted zone. Take the other staircase to the third floor. At the top of the stairs, there's a hackable door. Hack into it. In the next room you can jump down onto the second floor balcony. There are two patrolling guards on that level. Take them out one by one, and hide the bodies in the corners. 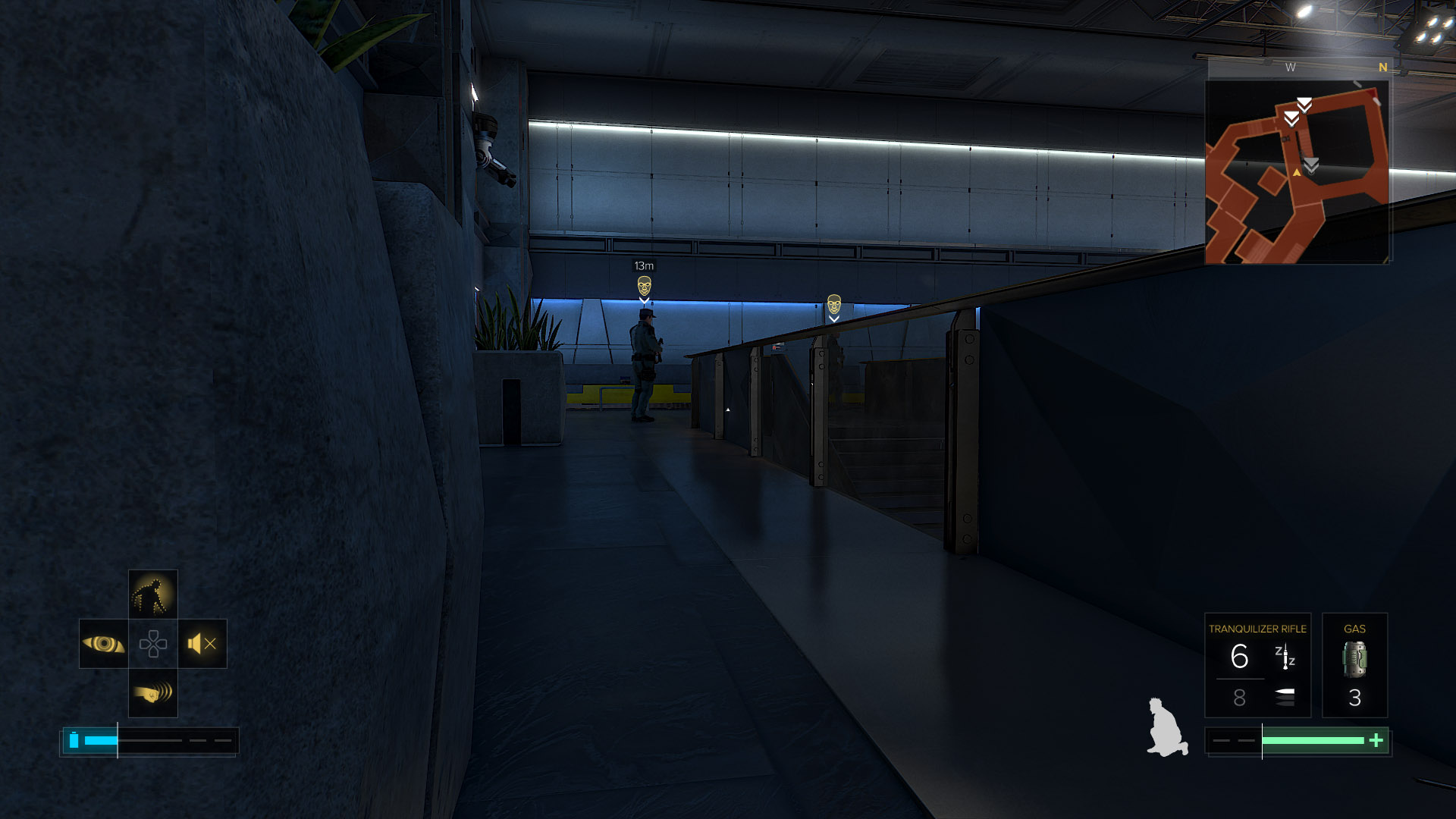 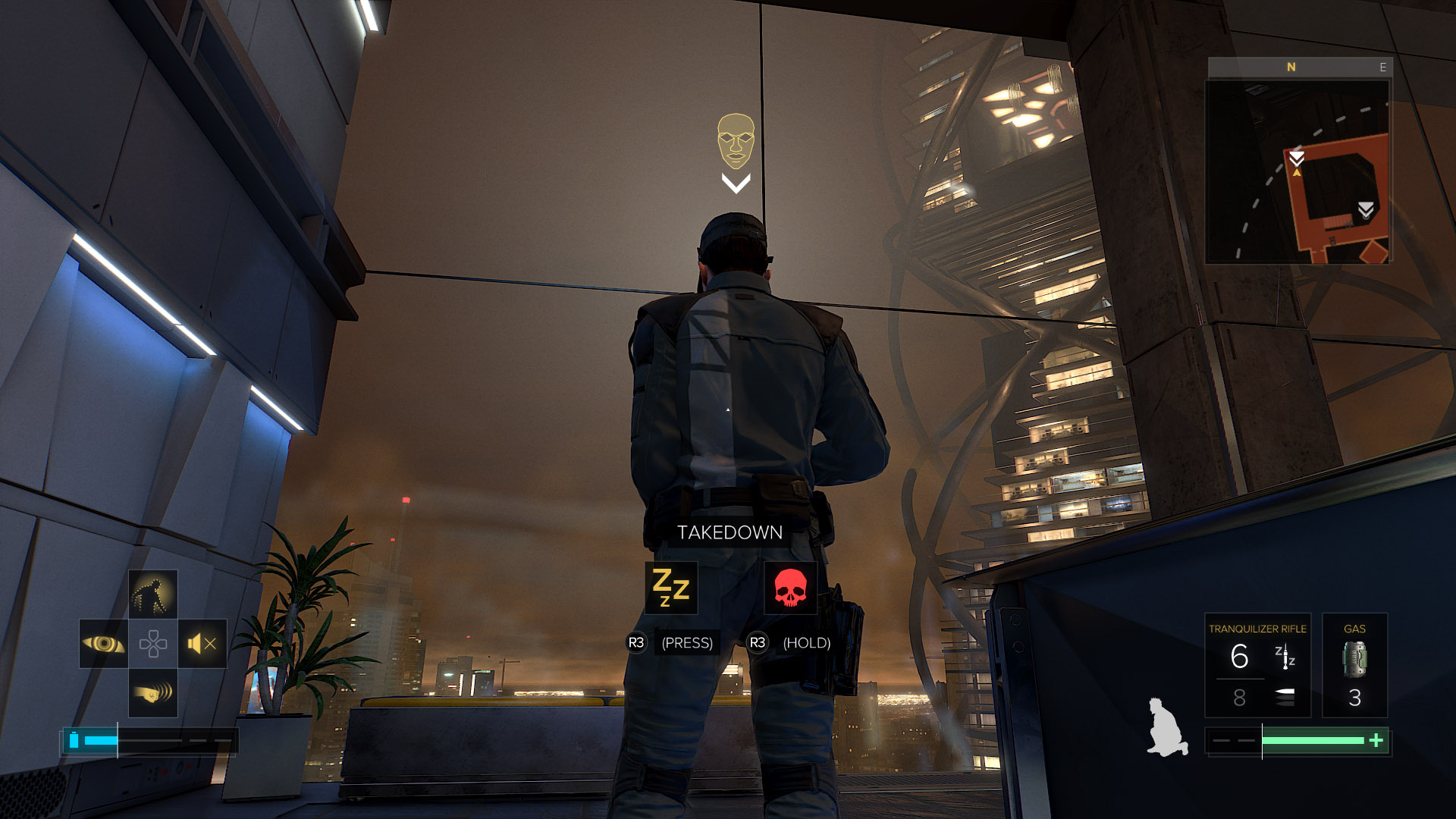 Guard 11: He's just at the bottom of the stairs closest to you. Take him out, and drag him up the stairs.

Head into catering from there. There's a guard waiting for you. Take him out, and move his body out of the way. It's a long, narrow hallway, so take cover behind boxes and desks. There's another guard down the hall. Dodge him or take him out. Reach the waypoint to trigger the next cutscene. 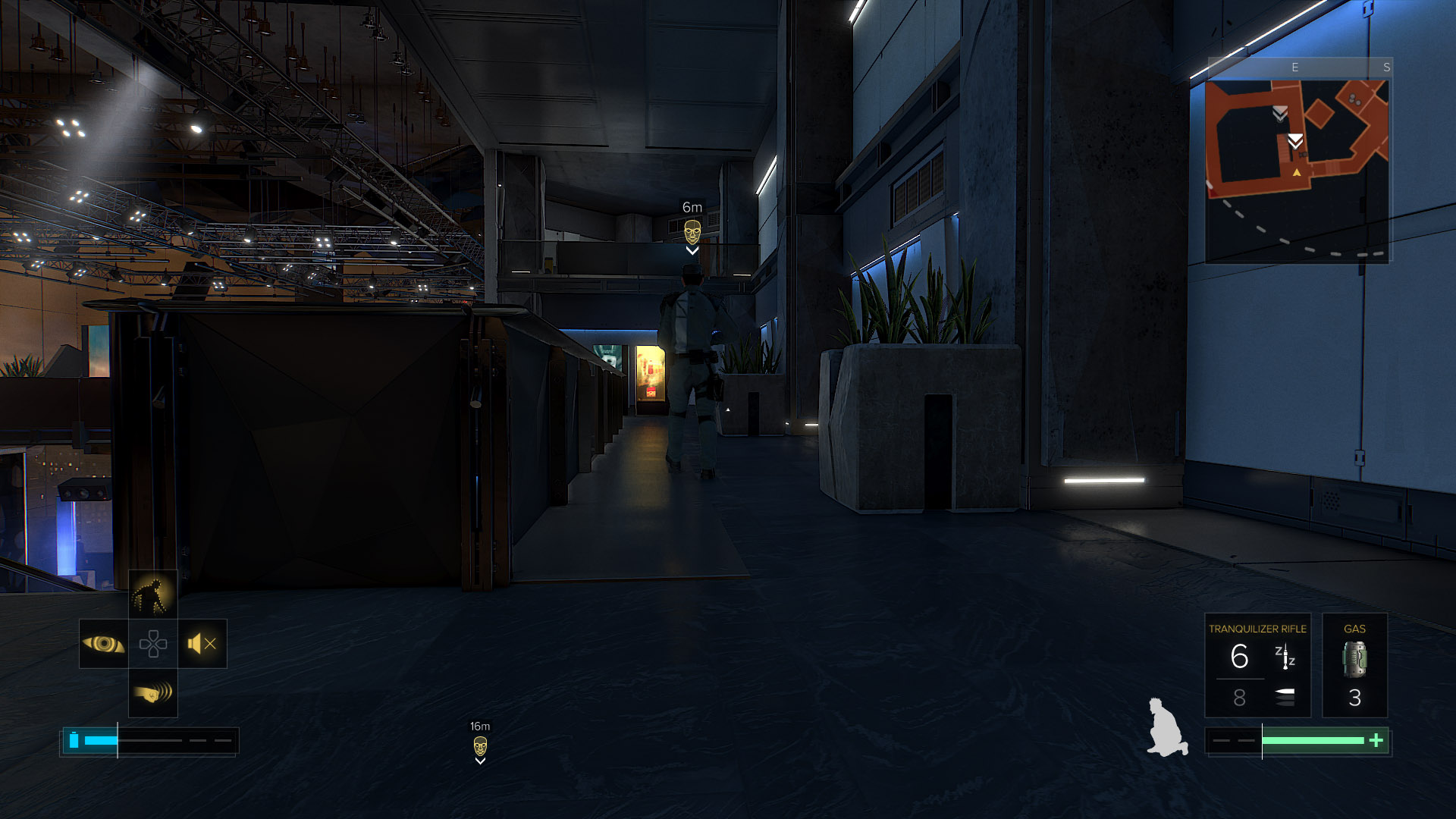 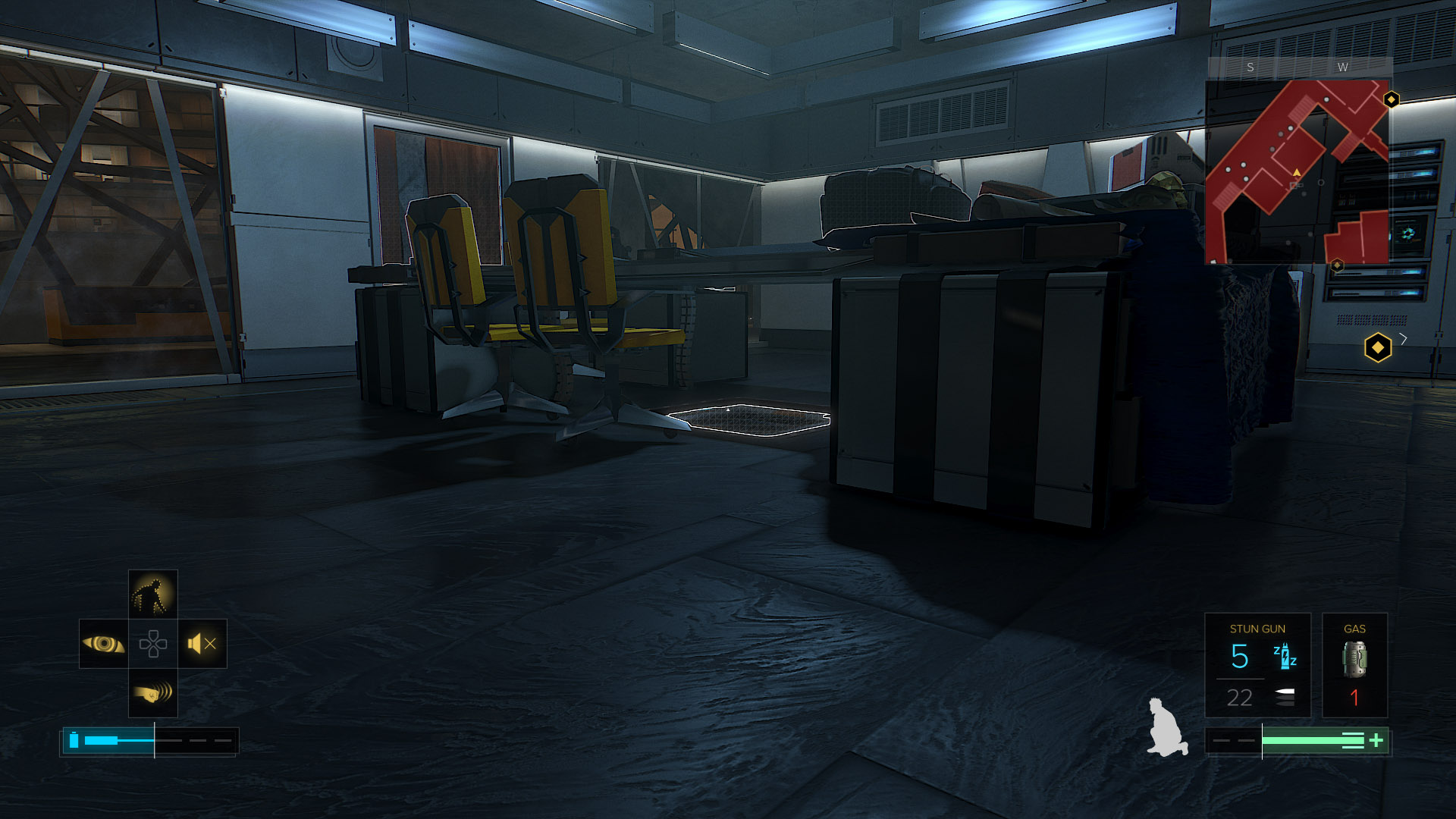 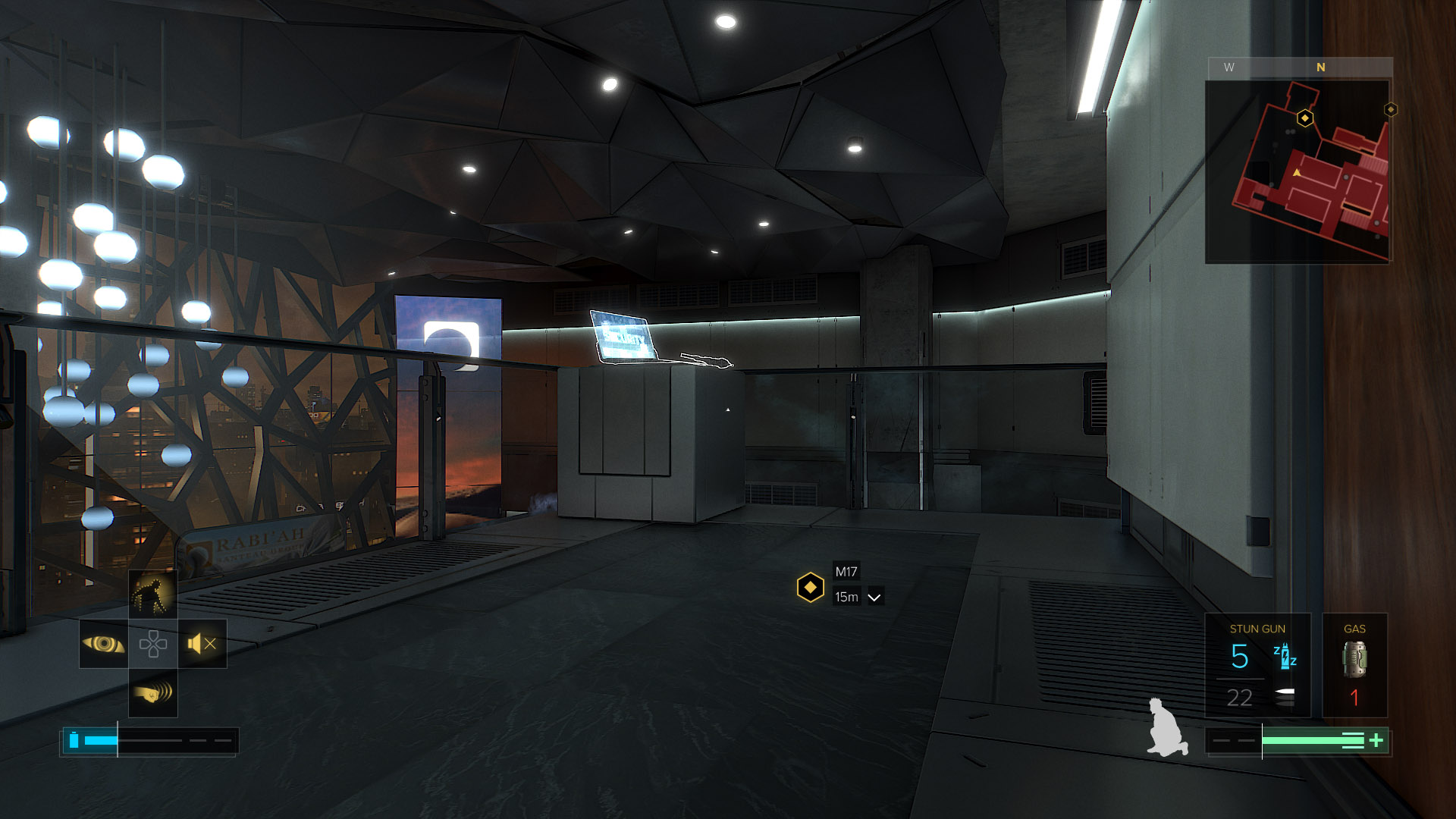 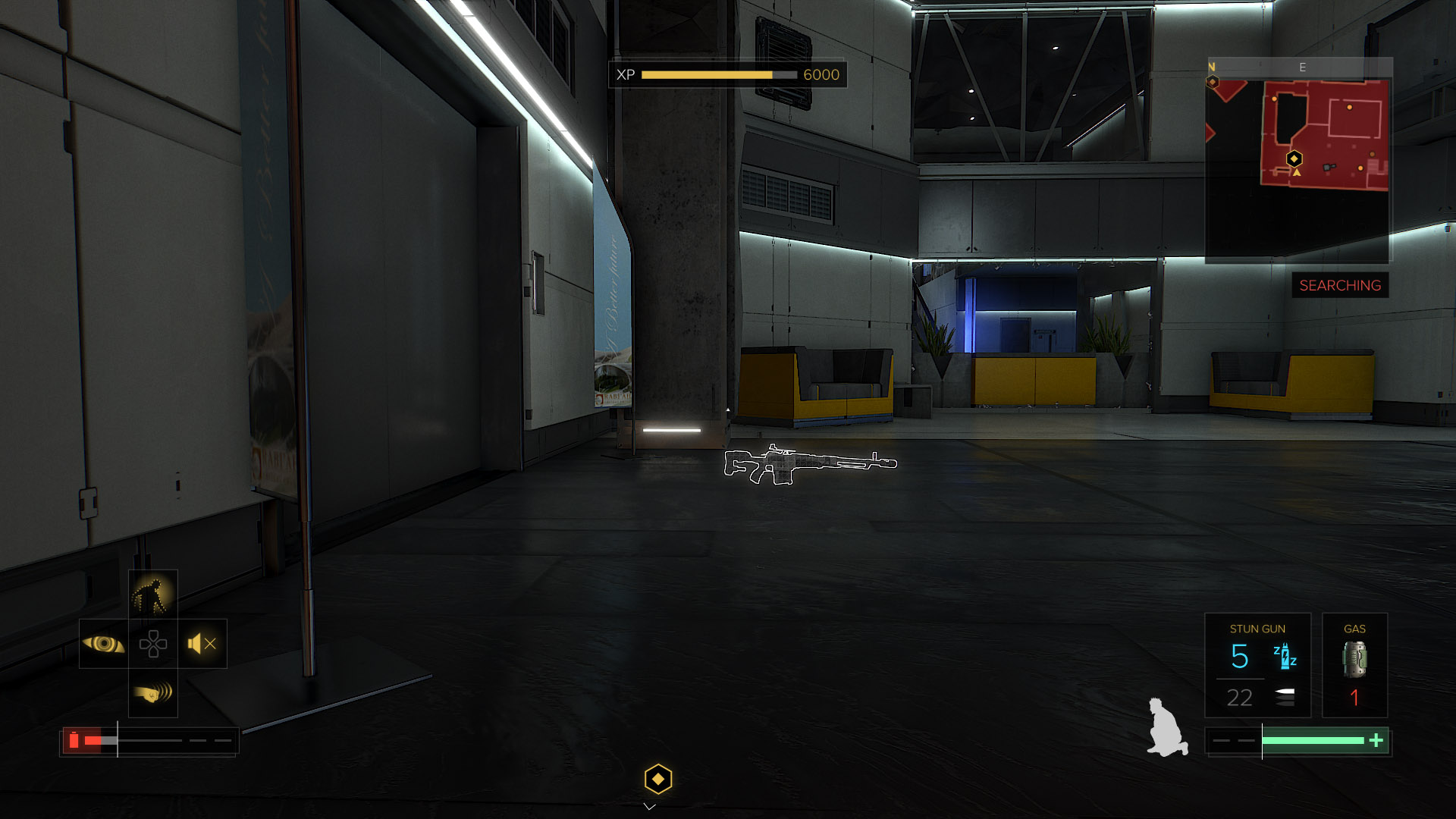 Miller is down. Viktor knows you're in the building and has bombs rigged all over several other buildings. Things aren't going well. You have a choice to make: You can find and stop Viktor or save the U.N. Security Council who are about to be poisoned. If they die, the Human Restoration Act will pass, stripping augmented people of their rights.