Share All sharing options for: Dishonored 2 walkthrough level 9: Death to the Empress

It seems like the repairs you did to the Dreadful Wale are holding, so there's nothing more to fix. Do your usual sweep for items, but you won't find much. Head upstairs and have a rough conversation with Meagan. Before you leave, pickpocket her room key from her. Go grab the two bonecharms from her room — it's right off of the main briefing room — then talk to Sokolov.

When you pull in the skiff, turn right and climb up the rocks. Before you climb over the railing, Far Reach up onto the metal pillar. There are three wolfhounds sniffing around on the street. You're going to have to take them out — but they still don't impact your body count.

The first building on your right is the black market. Buy any last upgrades you want — we recommend grabbing the silent movement upgrades. If you're low on cash, you'll be able to find the key that allows you to rob this black market in just a minute.

Head back out front and continue along the street. There are no guards, but be on the lookout for more wolfhounds. If you haven't put it together yet, you're traveling backwards along the path you took to escape the tower in your first mission, so things should start to look familiar. The Dunwall Courier building will be on your right.

Far Reach up the front of the building and talk to your reporter friend. Loot the building on your way out. Take the stairs down and head out into the alley — the same way you came in on your first visit here.

There's a shelf on the right immediately outside the door. Clear off the bottles to find the Common Key.

To rob the black market, go out the back door — it's to the right of the display cases. Drop down to the level below and turn around. There's a locked door that will lead you to the basement of the black market. Climb up the boxes and through the hole in the floor. Knock out the shopkeeper and loot to your heart's content.

When you come to the gap in the carriage rails above you, turn to your left and Far Reach up into the facade-less building. There's a witch hiding up there that you'll have to sneak up on and take out. There's a final Outsider Shrine in the building across the street. We'll leave the details to the collectibles guide.

Far Reach back down to the street, then continue along it to the door. (And rob Galvani's apartment — on the right — another time on the way past to pick up the Familiarity Breeds Contempt achievement.)

There's a gate blocking much more progress. Head into the building on your right to find the controls.

Inside, use the whale oil canister dispenser and filler and then install it in the wall socket. Hit the big red button to open the gate.

The tunnel beyond the gate is full of bloodbriars. Far Reach up to the pipes on your right, then Far Reach again to get out of the tunnel.

To your left is the greenhouse — check the collectibles guide to find the bonecharm up there. Instead, we're going to the top of the wall on your left. We're going to take you the long way around to your destination, but this way keeps you from most confrontation and out of trouble.

Far Reach up to the roof of the tower in front of you, then start dropping down. Keep quiet because there are three witches and a few gravehounds nearby. Domino the witches and knock them out — you should be able to get past without alerting the gravehounds. In the corner, drop over the wall onto the the metal walkway.

Far Reach over to the next wall. Sneak along the wall and climb up onto the railing. There's a witch to your left — knock her out, then turn around.

There are two more witches and a gravehound on the bridge. Domino the witches and wait. One will walk toward you and move to the opposite side of the building. Far Reach behind her, and knock her out. The gravehound will likely come investigate — just wait for it and destroy the skull.

Climb onto the railing and look to your right. You'll see three more gravehound skulls — destroy them. Hop down and head to the area you just cleared. (There's a final painting to your left.) Turn to your right and climb up the rocks to the gazebo. Inside, pay respects to your mother to earn the Gazebo achievement.

Turn toward the Tower. Climb over the hedge, then Far Reach (or just walk, we guess) to the next pillar. Far Reach down to the witch on the wooden ramp. Knock her out, then continue sneaking up the ramp.

There are several witches up here. Just wait until they've got their backs turned and go through the door to the tower.

Inside, turn to the right and head toward the elevator. Sadly, the power's off, or this would be a much faster trip. Also, the door to your left is blocked, so head back to the front door and climb over the barricade.

Far Reach up to the chandeliers. Destroy the gravehound skull on the floor next to the High Overseer's body — mostly just because. Use Far Reach to pluck the bonecharms from his belt without getting too close.

Far Reach to the balcony on the second floor and approach the statue of Delilah. Talk to her or don't, then climb over the barricade behind her to find a door.

Go through and turn right. There's a smaller door at the end of the hall. Use keyhole peek before you go barging in because there are two witches inside.

Turn left and climb through the dumbwaiter hole in the wall (we're not positive this is for a dumbwaiter, we just wanted to say dumbwaiter). Turn to the right on the other side and move forward slowly until you can Far Reach up to the vent. There are two witches and a Clockwork Soldier in the hall.

Head to the left along the hall to the end. Wait out the Clockwork Soldier's patrol, then Far Reach into the Security Room stairwell.

Head downstairs and power up the elevator with the whale oil dispenser. Don't go far — there are two witches on their way down to investigate. Climb up onto the pipes and wait for them (and grab the bonecharm while you're up there). Knock out the witches and make your way back upstairs.

Stay low and don't rush into the hallway at the top of the stairs — that Clockwork Soldier is still patrolling. Far Reach back up onto the air vent. Wait until the Clockwork Soldier goes around the corner, then go through the door at the end of the hall on your right. Keep going straight until you get to the Chapel. (If the Chapel isn't on your HUD, you just haven't overheard the right conversation. What you find there will still work.)

We're going to gloss over the details here, because it's cool to watch and what you have to do is straightforward and right there in front of you. Listen to the audiograph, read the note, pick up the ingredients and craft the Corrupt Rune. This is what we'll use to give Delilah her nonlethal punishment.

There are several ways to get back to the elevator, but the safest and easiest is just to retrace your steps — you already know where all of the enemies are. When you get to the elevator, call it, then step back. There will be a gravehound skull in the elevator. Smash it, then take the elevator to the fourth floor. There's only one door at the top. Go through it.

There are no enemies on the rooftop, so just make your way toward the door. Don't go through the front door, though. Turn to the left and look for an alley to the side. Go to the end and climb through the window on the right. 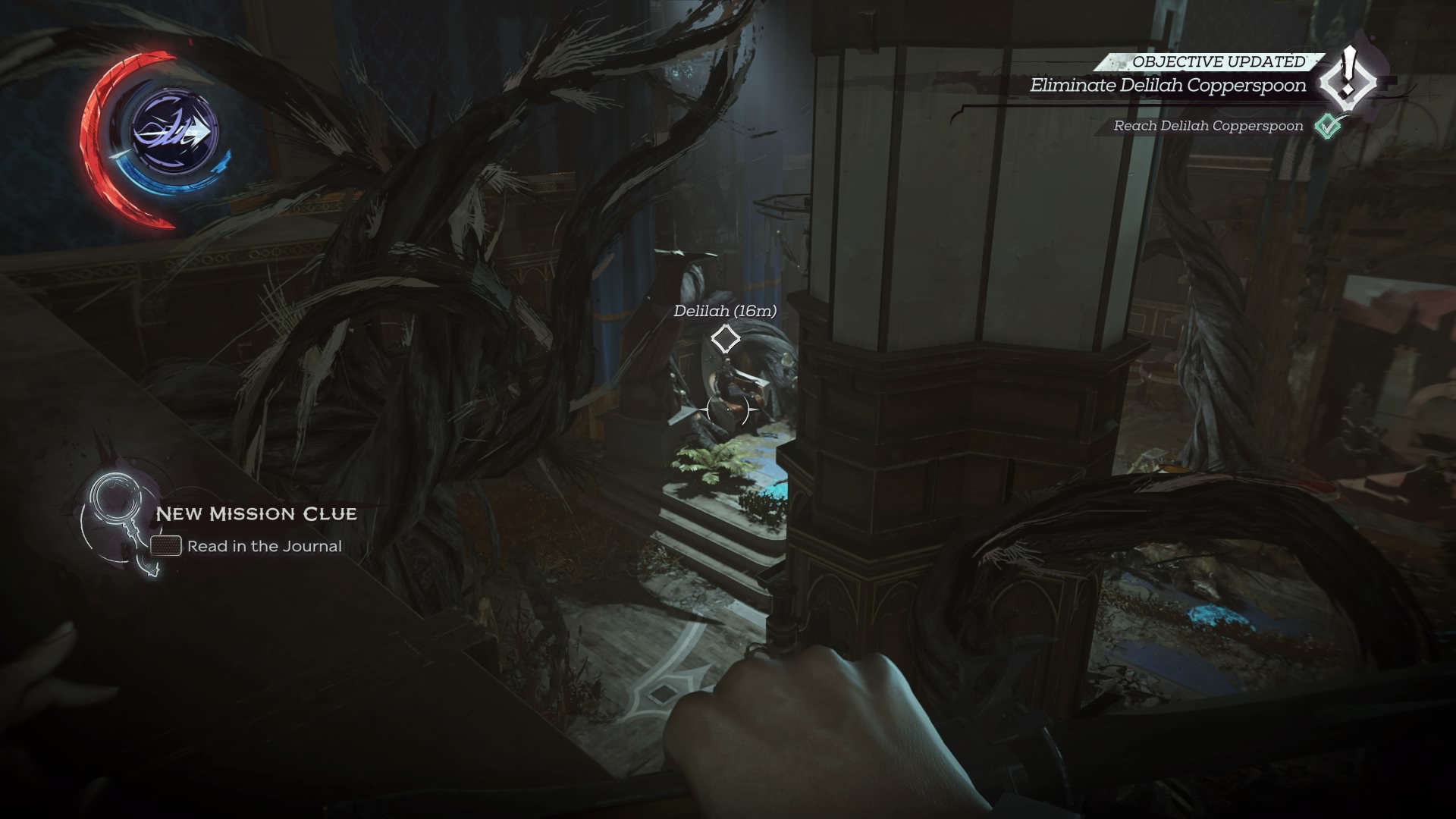 This will bring you into the throne room on top of some ledges that keep you out of sight. Work your way around the room using the ledges and chandeliers until you can get an angle on Delilah.

Equip the heart and use it on Delilah to give her her soul back.

The first thing you'll face in The World As It Should Be is a wave of Delilah duplicates. There are six of them and there's no good way to hide from them — but they also don't count against your murder stats, so now's a great time to work out some frustration. Keep moving, Domino them whenever you can and kill them all.

After they're defeated, you'll face Delilah herself. Once again, keep moving — Delilah's magical line attack will turn you to stone if it catches you. Aside from that attack, there's nothing surprising about the fight. Knock her out and carry her back through into the Throne Room.

Set Delilah on her throne and watch as she gets her justice.

When she's handled, turn your attention to your father, then watch your happy ending.