Crimson Dragon's director talks moving to Xbox One, gamepad controls and the 360 version

Share All sharing options for: Crimson Dragon's director talks moving to Xbox One, gamepad controls and the 360 version

When Microsoft revealed Crimson Dragon in 2010 — then known as Project Draco — fans were conflicted. They loved the Xbox 360 return of on-rails dragon shooting from the director of Saturn classic Panzer Dragoon, but were less universal in their love for its Kinect-only control scheme. Answering those concerns on Monday, Microsoft announced that Crimson Dragon is headed to Xbox One, and that the game will now support both Kinect and traditional gamepad controls.

In an interview with Polygon following the announcement, game director Yukio Futatsugi said Microsoft approached him around the time of last year's Electronic Entertainment Expo to suggest switching to the new hardware, and he decided to do it because he thought it would help make a better game.

When Futatsugi first started work on the game, notably, it wasn't a lack of time that prevented his team from adding gameplay controls. In a 2011 interview, he said he hadn't added them because the game was designed from the start for Kinect.

"It probably could be done physically on a controller if you tried," he told website 1UP. "But that would totally throw off the game balance, difficulty ... all that stuff. And it's not just difficulty and game balance in that sense, but it's also because all of the game decisions and level designs have been made from the ground up to be able to be enjoyed on Kinect. We have no idea if would be fun if you played on a controller — we couldn't make any guarantees there. I'm sure really dedicated Panzer fans want to play on a controller, so I understand that feeling, but if I were to make a controller game it probably wouldn't be this game."

Speaking this week, Futatsugi told Polygon fan reaction was the main reason he wanted to put gamepad controls back in, which he was able to do when he found himself with extra development time in the move to Xbox One.

Asked how he's compensating for a game design originally built around Kinect controls, with all the subtleties that involves, Futatsugi acknowledged that balancing the game to support both interfaces is a challenge. "Balancing the game is the most difficult part of development at the moment because playing it with Kinect and playing with the gamepad are two totally different ways to enjoy the game," he said. "That's what I'm suffering through right now."

Futatsugi added that there won't be any level design differences whether players choose to play using the gamepad or Kinect controls in the final game, and that the game will allow players to swap between modes on the fly. Rather than selecting an interface up front, players will be able to hold the controller or put their hands up and the game will automatically identify how they want to play. In order to balance the two control modes, the game will subtly increase the size and speed of the aiming reticule when players use Kinect controls, though this will be invisible to players. 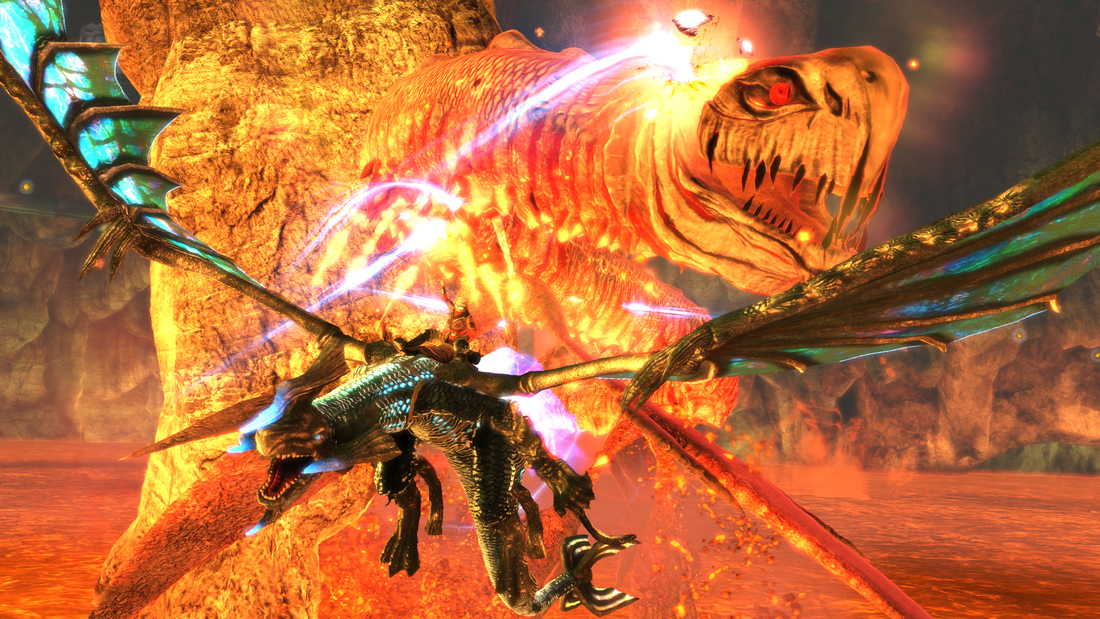 Futatsugi's other struggle at the moment is balancing the game based on how players choose to play. Players will be able to attempt the same campaign by themselves or with one or two friends — or with an artificial intelligence-driven dragon based on a friend's saved data. "It's difficult," he said. "We're trying out a way we can balance that without taking too much time, while still making the game fun."

Beyond that, Futatsugi said the game has changed in subtle ways since its transition from Xbox 360 to Xbox One. It's still running on Unreal Engine 3, with a mix of new and old art assets showing more detail and background objects. And it still contains a light role-playing system for players to upgrade their dragons over time. But now players will be able to choose from six types of dragons rather than six dragons, and they will be able to use Kinect for voice commands, though Futatsugi declined to say specifically how those will work.

Futatsugi confirmed the game is still planned only as a downloadable title, though when asked if Microsoft will sell the game using a free to play model similar to Killer Instinct's, he said he doesn't know yet. He's considering adding a Smart Glass feature, but said it will be relatively minor if it makes it in, and says that he hopes to add additional game stages and dragon types as downloadable content if the game sells well enough to justify it. He also couldn't commit to a release date or even a release year, just saying the game will be on the way "soon."

Finally, Futatsugi said that the Xbox 360 version of the game "has not officially been canceled." But Futatsugi could only hint at what that means. "Microsoft is going to make an announcement about that, so I can't really talk about it," he said.