It's easy to point to the obvious things: It's a series about a little dude who travels via plumbing, jumps on angry turtles and has a decades-long rivalry with a pissed-off dinosaur. But it's the little details that really drive home Mario's surreal nature: the bizarre terrain, the wacky physics, the way putting on a costume imbues magical powers.

The series has remained vital for close to 30 years because these elements are so playfully integrated with top-level design and, typically, a healthy balance of nostalgia and brand new bits of gameplay. What's the secret behind the magic? Post-it notes.

"The first thing we do is decide on a concept for a stage that really drives how a player will be experiencing it," says Nintendo Entertainment Analysis and Development (EAD) Planner and Project Leader Koichi Hayashida, speaking to Polygon from Nintendo's E3 booth. "It's something we all get together to discuss — we get a lot of Post-it notes, and we just put up hundreds of them onto the wall and start looking at them and discussing them. And out of 100 ideas on all of these notes, we might end up only using one or two of the ideas generated. Some are completely crazy ideas!

"But once we've decided on a concept, we make the stage, then we play it, then we refine it. And that process repeats over and over again until we get to the point where we feel like we're mostly polishing the gameplay in a very fine-tuned sort of way. When we get to that stage, we know we're almost done." 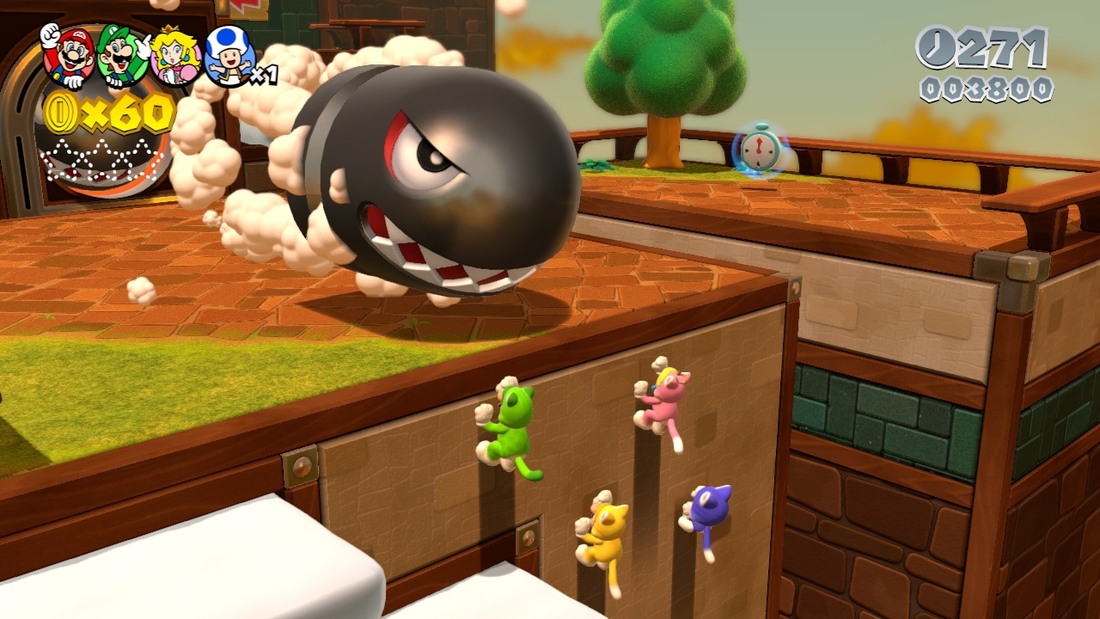 Hayashida and Producer Yoshiaki Koizumi previously worked on the Mario Galaxy series and 3DS gem Super Mario 3D Land, so they can accurately be called experts in the field. The pair is in charge of crafting Super Mario 3D World, Nintendo's just-announced 3D Mario platformer. Like most of Mario's recent console outings, it's been built to accommodate single players and supports local multiplayer, with frenetic co-op platforming for 2-4.

Notably, the new title stars the beloved lineup from Super Mario Bros 2, with all of their classic abilities intact. Mario is the baseline character, Luigi jumps a bit higher (but is consequently harder to control), Princess Peach can extend her jumps and "float" for a short time, and Toad is the fastest of them all. A new power-up joins the usual Mario arsenal: a bell that turns your character into an obscenely cute cat and allows you to climb up walls and pounce on enemies with a lethal (and adorable) cat attack.

The resulting mix plays much like a blend of Super Mario 3D Land and a fully open Super Mario Galaxy, only this time, you're competing with three of your best "frenemies."

The decision to bring the band together from Super Mario Bros. 2 made for some interesting design challenges. The developers had to design stages suited for 3D multiplayer platforming; and they had to do so in ways that complemented the various characters' abilities. Getting the camera to work in this setting was a particular difficulty, as was making sure the different jumping heights and throwing abilities didn't mess with a stage's flow.

"We think about our level design from a perspective of first, 'is this something that's fun to play through as Mario?'" Hayashida said. "In this game, we had some interesting challenges in that you can lift up other characters and throw them ahead of you — so you can jump and throw someone — and they go really far. That can be a really interesting challenge in level design; to make sure people don't go where we don't want them to."

But this certainly wasn't insurmountable for a team that knows Mario's quirks and physics so well.

"Having worked on games like Super Mario Sunshine, where you could hover with the flood into all sorts of interesting areas, or even in Super Mario Galaxy 2, we found that cloud Mario had a pretty big reach compared to what we were originally planning. So we had a lot of experience in thinking about players being creative to reach interesting parts of levels. So it feels like we're going to be ok with this one!"

Super Mario 3D World has an obvious lineage from the Galaxy series – as did Super Mario 3D Land. "Our goal, of course, is always to make something new." Said Hayashida. "And although we are certainly using familiar elements and perhaps the structure from Super Mario 3D Land, we're still — once we're in the development process — looking for any kind of ideas that can match with what we're doing at the time.

"So, for example, you may recall that in Super Mario 3D Land, you were collecting star medals in stages — three in each one. We combined that with the idea of the green stars from Super Mario Galaxy 2. Each of them had kind of a unique route that you had to follow to get them. And so when you put those two elements together you come up with something that's different and really fun. We keep throwing any ideas that come across us like that out, and as soon as we find some form of expression for them, we put them all together. In that sense, I feel that the development style is very similar to what the Galaxy games have been like."

The recent growth of EAD Tokyo has also contributed to the team's more creative leanings, resulting in "some very distinctive leanings."

"We're doing this kind of Galaxy-style development with a very large staff now," said Hayashida."We have a process where [a given] gameplay idea can only really be expressed in a very unique way in a different kind of stage."

The playable demo had two stages (out of six) that positively reeked of Super Mario Galaxy. One involved Mario riding a giant sea creature across a maze-like ocean, while a boss battle with a giant worm creature felt like it could have been dropped in from any 3D Mario game from the Sunshine era on. 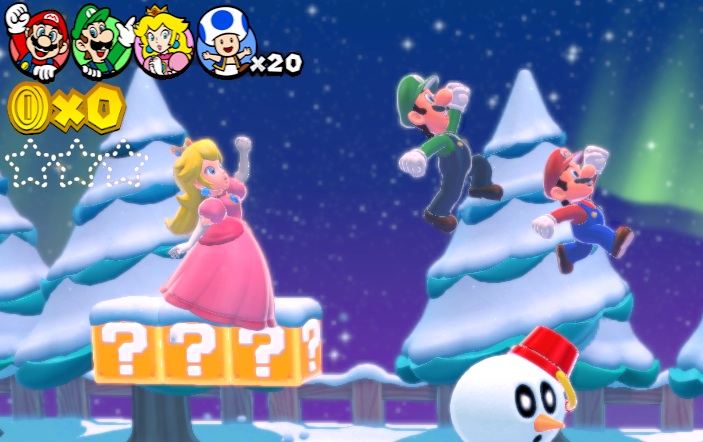 Sidebar: The return of the princess

Arguably the best character from Super Mario Bros. 2 is Peach, with her special float ability that allows her to extend her jump further than anyone else — a keen advantage in a platformer. Designer Koizumi was thrilled to bring Peach back to the action, and his reasoning for wanting her back on the team was welcome, since Peach has become something of a videogame poster child for "damsel in distress."

"I feel like Mario games, as you know, have done lots of representation of male characters over the years," he said. "Perhaps much more so than female. So it's actually really nice to be able to have a female playable character in the game. I think she adds a lot to the sense of competition when you get in multiplayer: you can have different people choosing different characters based on their personality or whoever they like. And princess Peach is just really a lot of fun to play!"

With a series that has close to 30 years of continuous releases, there's a huge deal of history to mine. And Nintendo has never been shy about playing the nostalgia card with their main series. Getting the balance right can be tricky, but it's an organic process.

"Quite often, we find ourselves in the situation where new elements of gameplay that we've generated match very well with older expressions in Mario games," Said Hayashida. "And if it's the sort of thing where it looks like something fits, where we want to do this gameplay idea, and this kind of enemy or terrain feature seems to fit from an older Mario game, we're happy to apply it in that situation.

"And oftentimes, this happens because a lot of members of our staff are huge fans of the Mario series, and they're always the ones pushing for the inclusion of these retro elements. Sometimes we have to double check to make sure that they're thinking about gameplay first and foremost, because they are such big fans of these nostalgic elements."

It's a relatively new "problem," according to Koizumi.

"For example, during Super Mario Galaxy, we weren't terribly worried about adhering to a certain form. It was really about coming up with gameplay first — making something fun and new — not necessarily focusing on nostalgia. Quite often, it's a lot of the staff that we've hired that bring in these ideas that they'd like to see from older Mario games!" 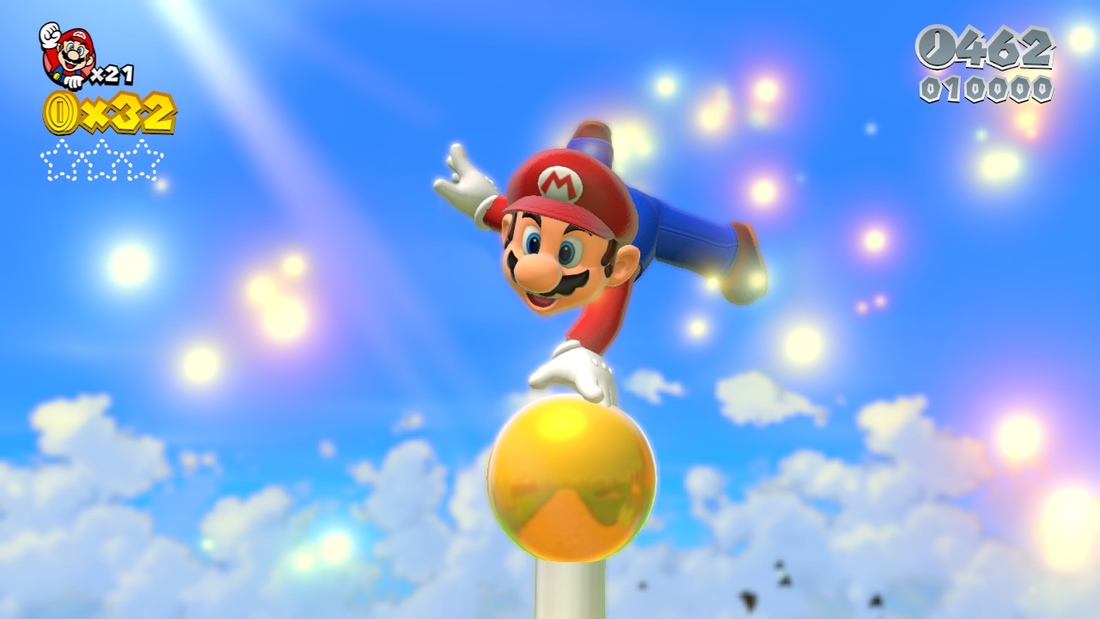 The Super Mario Galaxy series has a lot of passionate, vocal fans — not all of whom were happy to hear that the next 3D Mario game would have a multiplayer focus. Hayashida directly addressed this with an emphasis on EAD's unique — and often outside-the-box — sensibilities.

"To those people," he said, "I would like to say that we're planning so many interesting new ideas for single player that you shouldn't necessarily feel like you are restricted to playing this game in multiplayer. As we said earlier, we had this kind of Galaxy-style development, where we threw out all sorts of different ideas and what we've come up with is really a lot of fun whether you're playing single player or multiplayer."

Mr. Koizumi was quick to point out that the multiplayer focus wasn't some kind of New Super Mario Bros. shoehorning — the team has wanted to make this style of game work for some time.

"Ever since Super Mario 64, we've always wanted to create a multiplayer 3D Mario game, but there were lots of challenges," he began, "and I feel like now we've gotten to the point where we've come up with the perfect expression, which is a very satisfying multiplayer experience in a 3D Mario world. I think people will have all different reactions to some of the developments that we're putting forward, some of which are very reminiscent of the Galaxy series style of play."

It's heartening to note the creativity that EAD allows in the design process – given the kind of pressure Nintendo has put on its signature plumber to bring home the bacon in terms of sales. There's a playfulness in Koizumi 's and Hayashida's voices when they describe their design process that's frankly refreshing to hear in the sometimes-cynical world of AAA games. And an extended session with the E3 demo assuaged our fears that Super Mario 3D World would be "just another" multiplayer Mario title.

Mario will always be weird, so long as his masters wield their Post-its freely.