Crazy Taxi: City Rush sounds like a bunch of buzzwords bouncing around at a seminar no-one sane would want to attend.

Sega, along with UK developer Hardlight Studio, which is best known for its work on Sonic Jump and Sonic Dash, is resurrecting the old arcade and Dreamcast game for the new age. In retrospect, the original 2000 game felt very much like a modern mobile game. Collect a passenger. Drive to a location against the clock. Accept rewards and proceed. Precisely how this plays out as a freemium experience is yet to be revealed.

During a short demo at a recent Sega event, it's clear that the game has retained the jolly, primary-colored atmosphere of the original, which spawned a series of so-so sequels before, like many a Sega franchise before it, going quiet.

The iOS and Android game requires that you jump, turn and dodge, switching lanes in busy streets, using the touchscreen. The gas pedal is always at full whack, so you are left to the business of hopping lanes with a left or right swipe and touching the screen to brake, in order to pick up new passengers.

Tricks like sharp turns and U-turns required holding a swipe or moving our finger in a specific direction. It's simple, fun fare. You have probably played games just like this before. 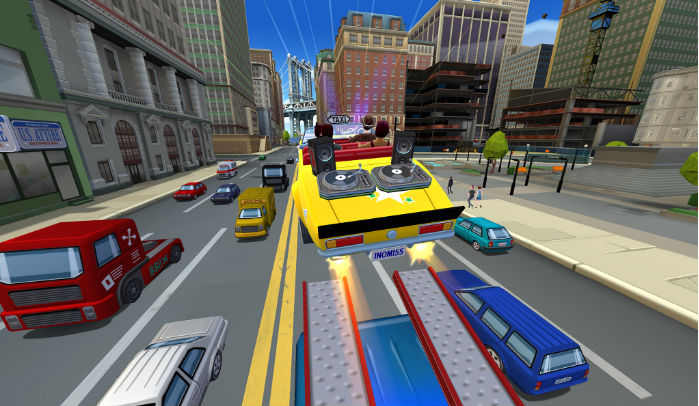 "On the console, everyone has a controller," said Kenji Kanno, Crazy Taxi series creator. "With this it's much simpler. Tap, touch, drag, things like that. Trying to fit the gestures into the mobile experience for Crazy Taxi and make it a fun game is a pretty big challenge."

Kanno said that Crazy Taxi is perfect for the limited attention spans of mobile gamers. "It translates very well into where we're at with games right now," he explained. "You play for a few minutes and move on. That part of the experience is still there and will probably have a lot of appeal for players, especially those who played the original. We spent a lot of time working to get the controls right and making sure that it plays really well."

Of course, connecting with people via social networks is also part of the plan. "The more Facebook friends you have, the more social missions you have in the game," said producer Stephen Ye. "As you're playing the game, you'll see ghost versions of your friends drive by." The game can also be played without any social connections.

For Kanno, who worked on the original game, it's all about making driving games fun again, without all the rigamarole of upgrading automobiles. "With a lot of different driving games, the goal is to get more cars and beef up your cars. Our game is basically, you just get in the taxicab and drive crazy and have fun."

Kanno, from Japan, said that he still loves the idea of a zany driving game, especially one that is set in U.S. cities. "Cities on the west coast, they're always very bright," he said cheerfully. "They seem like they'd be a lot of fun to drive around."