Living-room PC gaming was on the rise even before Valve announced its plans for SteamOS and Steam Machines last fall. And although the company recently delayed the launch of the Steam Controller until 2015, the tried-and-true control scheme of keyboard and mouse remains viable on a couch as well as at a desk; it's just better with some additional accessories.

Many lapboards — the platforms that let you game with a keyboard and mouse sitting in your lap — have notable shortcomings that make them less than ideal for this purpose. Hamburg, Germany-based peripheral manufacturer Roccat is working on a different kind of lapboard, with an eye on designing a device with a form to match its function.

The Roccat Sova, which the company debuted at E3 2014, is meant to be a premium peripheral. Its base is made of brushed aluminum, and integrated into that foundation is a full mechanical keyboard with Cherry MX switches and individually backlit keys. Below the keyboard sits a large palm rest, and to the right is a movable tray with a mouse pad; you can adjust it on a track from left to right, depending on how far you want your mouse to be from your keyboard. Both the wrist rest and tray are modular, so you'll be able to swap them out; Roccat is planning to offer schematics for 3D printers.

"We want people to be able to customize it for their own uses," said Tim Krause, senior PR manager for Roccat, during a demo at E3.

While the Sova itself is a wireless device with a built-in rechargeable battery — Krause told us it would last about 8 hours, although a press release from the company quotes a 12-hour life — it's really easy to use a wired mouse with it. A channel runs along the back of the unit, allowing you to put your USB mouse on the mouse pad and run the cable through the channel to one of two USB ports on the device's left side. The Sova uses a proprietary wireless bridge with a polling rate of 1000 Hz, so users of the highest-end gaming mice shouldn't see any drop in fidelity. 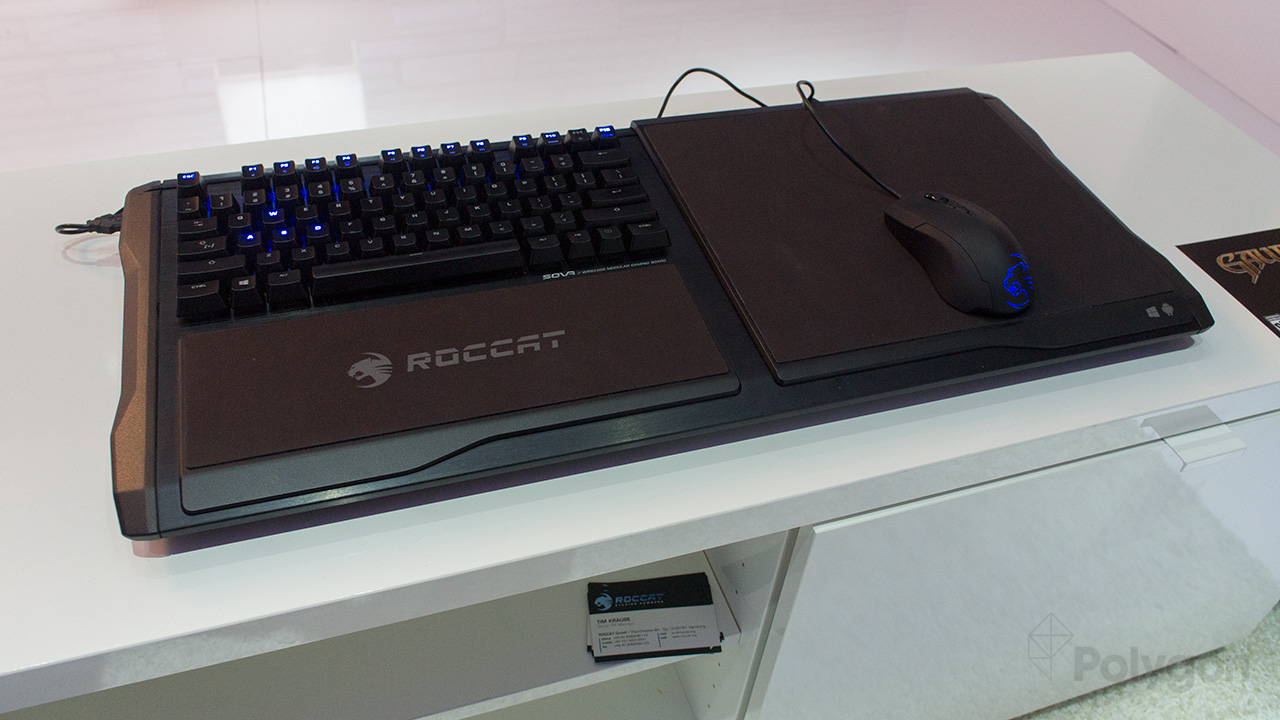 Roccat's lapboard is a relatively heavy device. Krause didn't provide an exact weight because the unit we saw was a prototype, but if we had to guess, we'd estimate the weight at 2-3 pounds. This is a feature, not a bug; the weight helps keep the Sova stable when it's sitting in your lap. Two long leather pads run horizontally along the underside of the unit, so it should still feel comfortable during long gaming sessions.

According to Krause, Roccat isn't yet sure of pricing or availability for the Sova; at this point, the company wants to get the prototype out there, and gather feedback from potential customers. The company's line of standard mechanical keyboards, the Ryos series, is available in three models from $99.99 to $169.99, so the Sova is unlikely to fall below that range. Krause did say that depending on what people say they might be willing to pay for such a device, Roccat may offer two different versions of the Sova, a premium model and a step-down option at a lower cost.

We really liked the feel of the Sova in our lap, and after an admittedly brief tour of just the menus in Arrowhead Game Studios' Gauntlet, we saw no glaring faults with using the Sova as a lap-based living room device. The battery life and price will ultimately determine the Sova's viability. But regardless of how useful the Steam Controller ends up being for keyboard-and-mouse-based games, sometimes there's no substitute for that setup, and the Sova seems like it will support that scheme well.

The Roccat Sova will support Android, Linux/SteamOS and Windows PC. Interested parties can submit their comments on the Sova website.