As the last team sports series to go to the newest generation of consoles, NHL 15 faces an unusual level of anticipation for its September launch. It's had, theoretically anyway, an extra year to figure out what will best take advantage of new technology, and how.

Where its colleagues had to be a little more conservative, and make sure their new generations were at parity with the previous one, NHL is a little freer to build entirely with the PS4 and Xbox One in mind. The result is a game that should be night-and-day different from its predecessor, if what EA Sports is showing so far is any indication.

The most visual difference already is known — that's the inclusion of NBC Sports' ice hockey broadcast package and the introduction of the network's top booth team, Doc Emrick and Eddie Olczyk, to the game's commentary. Their voices as well as their faces are in the game.

EA Sports filmed pre-game studio segments with the two. Rather than attempt to animate the m (much more time-intensive) or run their voices over pre-game sequences (less interesting, and invites players to button through to the action.) A notable difference in visual quality, transiting from the video to the gameplay, didn't help with immersion, but overall it worked. Emrick and Olczyk bantered safely about a generic Red Wings-Rangers game — when all else fails, mention the Original Six — but had they not appeared on screen it wouldn't have been any more meaningful than the introduction by outgoing team Gary Thorne and Bill Clement. 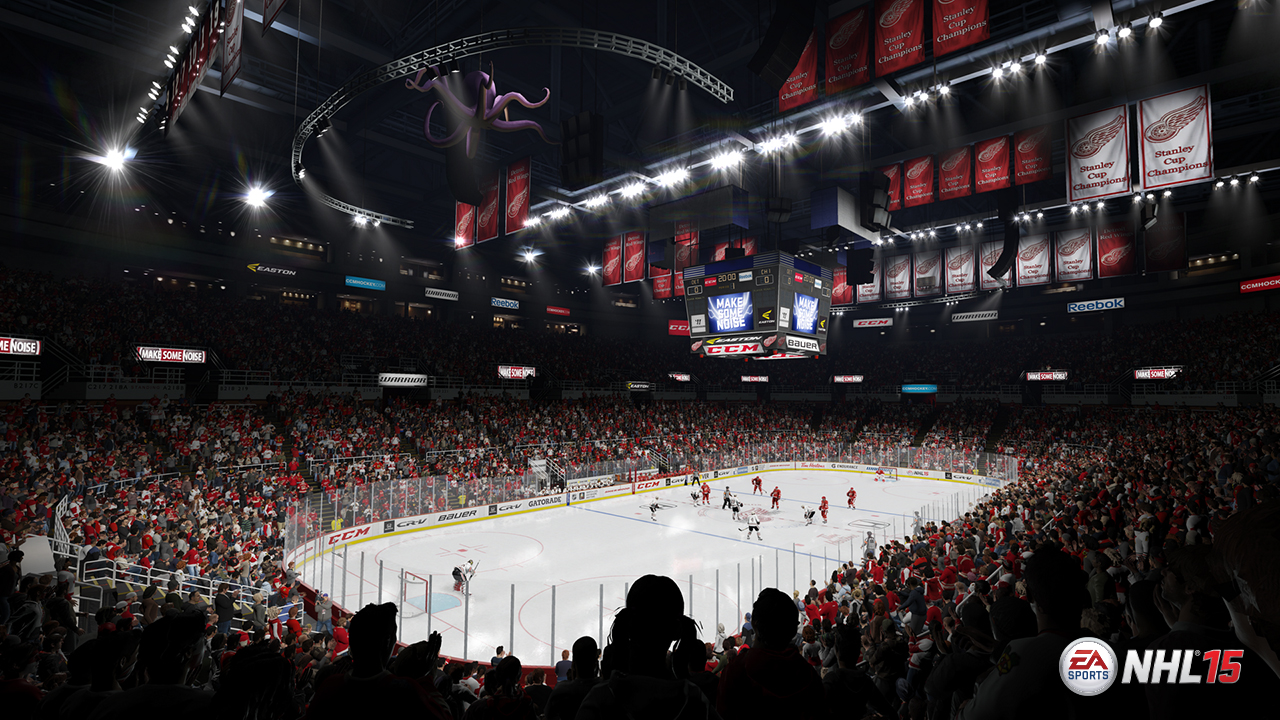 Submitting a game to an entire network's broadcast style surrenders a lot of creative prerogative. When I asked NHL 15 producer Sean Ramjagsingh if he was sorry to let go of the broadcast they'd built since the beginning of the Xbox 360, he smiled politely but didn't say anything. So, not really. They know they're catching on with a broadcasting brand on the rise, and Emrick is a voice uniquely identified with his sport.

The game plays differently but, honestly, it's very tough to vouch for that in such a limited session at a preview event. There's no reason to mistrust the promises Ramjagsingh's team is making but I had to have my attention drawn to them. Dekeing, for example, won't cycle through the animation and then return to the base pose. This means players can turn while executing a fake, or hold the puck in a spot, shielding it with their body or the stick. Enhanced puck physics is another key area but it will need a very large sample size to judge what it adds, or what disappointments it subtracts.

"For us, the puck was one of those things that could take us out of the experience," Ramjagsingh said. "For example, you do what you should do and dump the puck into the corner where it takes a bad bounce," effectively punishing smart play. Coding the interaction of hard rubber on a ice surface, with an object that can skid or roll, is not something I can judge in 7 minutes. Just know that, to do the job, EA Sports brought in someone who literally worked on the Large Hadron Collider.

The guy working on puck physics worked on the Large Hadron Collider.

They didn't solicit him, Ramjagsingh said, but when they saw his credentials, they figured unless he completely blew the interview, he'd be on the team. He didn't blow the interview. Ramjagsingh said they'd wanted to overhaul puck physics for a very long time and were told it would be at least two years. With their nuclear physicist aboard, it took one.

Finally, players are supposed to behave with more proactive AI that responds to what they're able to see. As a basic example, a defense in its own zone will look to cut down on passing lanes rather than spread out generically or pressure the man with the puck. Conversely, offensive players will try to skate to areas that have recognizable vacancies.

NHL 15 fixated on visual and gameplay upgrades in a preview event a month ago but gave the sense it has plenty more to showcase at E3 and after. Even just applying what was shown to last year's game — with a coat of next-generation polish — would make the next edition worth the wait.