Share All sharing options for: Hands-on with Call of Duty: Black Ops 3 multiplayer

The best kind of changes are the ones that make you think, "Well, yeah. I can’t believe I never thought of that before." Call of Duty: Black Ops 3 is full of those.

At E3 2015, we went hands-on with a pre-alpha version of developer Treyarch’s sixth proper Call of Duty game. It is loaded with tweaks and changes automations that seem, like most things, obvious in hindsight. At least from a certain point of view.

But in many ways, Black Ops 3 is so different that it also left us wondering what, exactly, makes a Call of Duty game — and whether Treyarch’s ambitious plan evolve the well-established franchise is incongruous with one of the most popular first-person shooter series in history.

Call of Duty: Black Ops 3 does many game-changing and ambitious things. We had to wonder whether, at some point, the purists will revolt.

Treyarch is creating Call of Duty: Black Ops 3 with a handful of philosophies in mind, none of which has more impact than the belief that the gameplay loop should be as tight as possible.

Call of Duty is about running, aiming down the sights, jumping, hopping over boundaries and obliterating your opponents. Well, that and dying quickly and getting back to the fight.

For years, some of those things have been limited, controlled manually. In Black Ops 3, that changes, and its effects streamline what was once mechanical. The two most obvious examples are the game's automatic mantling and unlimited sprint.

Here's what Treyarch figures: If you're sprinting toward a window or a box and you don't slow down, then it's a safe bet to assume that you want to jump over it. In previous Call of Duty games, you'd get a prompt to mantle over it. In Black Ops 3, it's all automatic. Of course you want to jump over it. And it works in all directions, too: if you want to hop over a ledge to your left, Black Ops 3 will do that for you automatically. The seven million times everyone's backed away from an enemy only to get caught on a short wall they can't see behind them is a problem of the past, too. You'll mantle right over it in Black Ops 3. Obvious in hindsight. 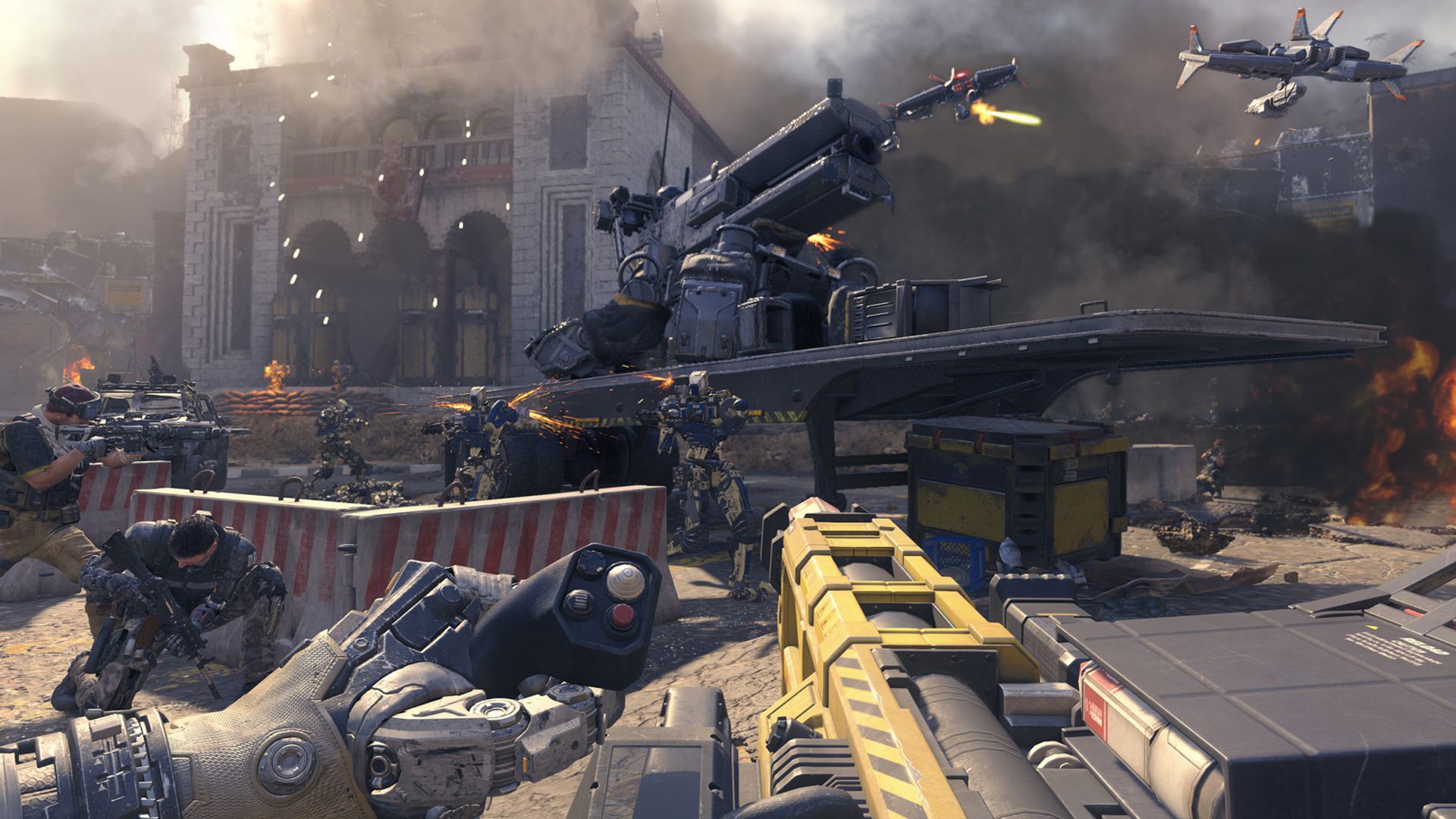 Black Ops 3: The future of Call of Duty multiplayer

Treyarch also looked at how the series' running worked and made a significant change there, too. Gone are the days of sprinting for a limited amount of time. Now you can run like you'd never get worn out. It's not just a relaxation of a former limitation. It allows players to do new things, too. Limiting your sprint wouldn't make much sense in the middle of a Titanfall-like wall run.

Layered on top of that is a philosophy called "weapons up," which means you won’t be pointing your guns in the air when you perform these automatic mechanical maneuvers. Black Ops 3 will handle the minutiae to let you handle the shooting.

The same applies to your new jumping powers, which are similar to last year’s Advanced Warfare, but not the same. The easiest way to think about it is like a double-jump, except that’s not quite right. Leap into the air, and you’ll see a half circle-shaped meter in the middle of your screen smiling at you. That tells you how much extra jumping you can do as the meter winds down. Hammer down on the jump button, and you’ll feel like you activated a pair of rocket boots. Tap it several times for short bursts, and float over chasms or between buildings like you just deployed a mini hang glider in your back. It’s up to you, and you’re in full control the entire time, free to shoot, turn and float the other way.

But it also comes at a price. No binary mechanical system built to anticipate human desire can be perfect. There were times when the game misunderstood our intentions and failed to mantle or grab onto ledges.

And it’s going to take some getting used to, too. Many years and many Call of Duty games have conditioned players to press a button to mantle. It’s going to take a bit to forget that muscle memory.

The changes aren’t all mechanical. When Activision and Treyarch unveiled Call of Duty: Black Ops 3 earlier this year, one of the biggest changes they revealed was that the multiplayer is populated with actual characters — not just avatars — whose innate abilities offer battlefield advantages heretofore unseen in Call of Duty.

Like many things in Call of Duty, they build upon changes introduced earlier. Last year in Advanced Warfare, players could customize the look of their characters, for example. And customizable, weapon-focused loadouts have long been part of the series. But in Black Ops 3, each multiplayer character has abilities that go well beyond laser dot scopes.

We learned about several at its reveal. Treyarch unveiled two more characters this week.

First up is callsign Prophet, who wields what amounts to a lightning gun. Fire it and, after a brief charge, a burst of coalesced lightning hurls toward your enemy. Connect, and they freeze, convulsing for a few seconds before they die. But it gets better. I connected with an enemy maybe 25 yards away. As he stood there, tethered to the ground by zig-zags of frozen electricity, a teammate ran up behind him. The lightning arced over to him, freezing and killing him. 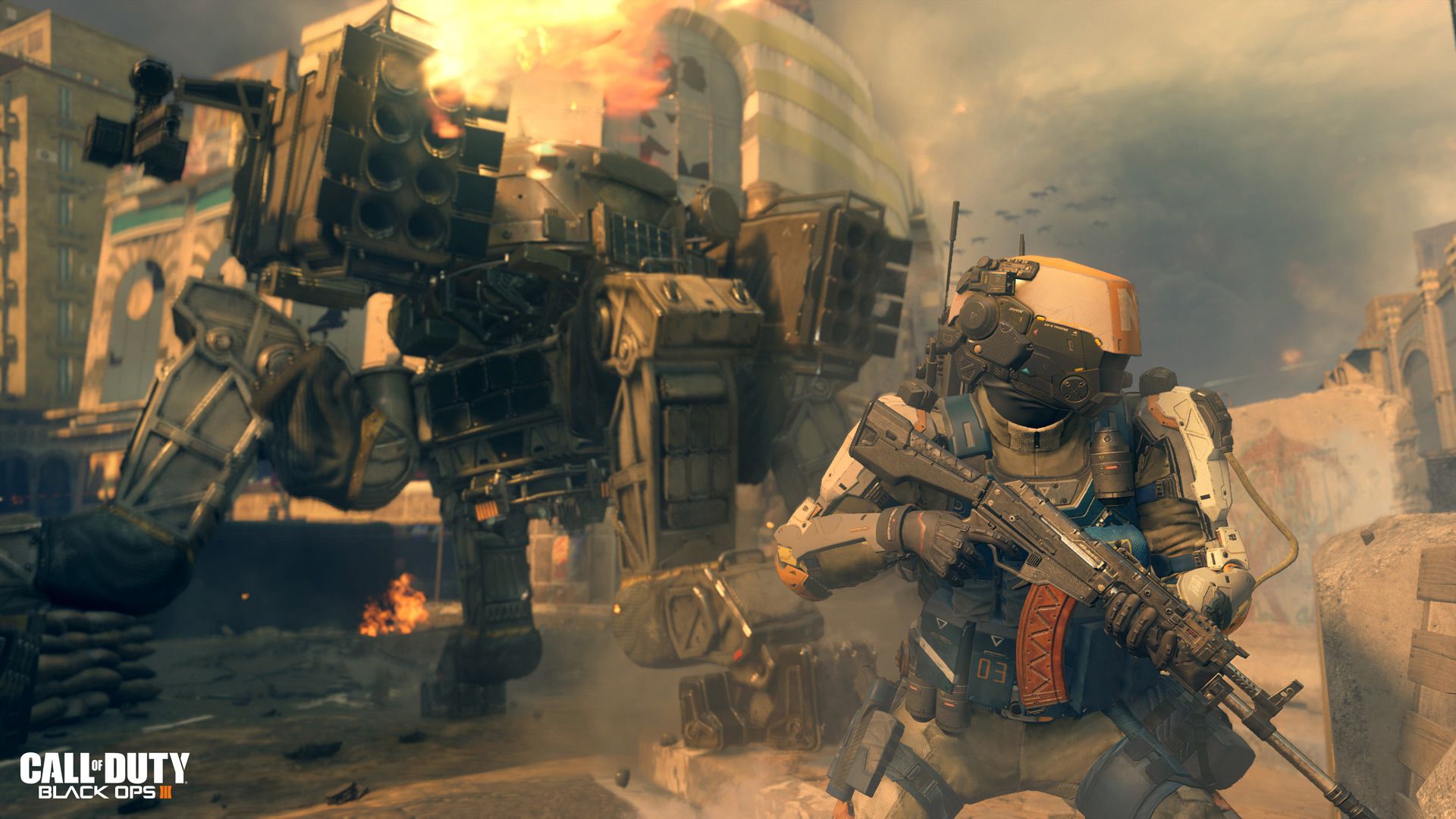 Prophet's special ability is galled Glitch, which can be amazing to watch. In a demo shown to explain it, Prophet was running out of a building and chucked what looked like a pale blue sticky grenade to the right of the door as he left. A few seconds later, an enemy appeared behind him in the same doorway. Then Glitch kicked in, warped Profit back into the room behind his foe, and he took him down from behind.

Callsign Nomad is a survivalist. His special weapon looks and fires like a grenade launcher. But instead of grenades, it pops out something like proximity mines. When an enemy approaches, nano bots fly out and swarm their target like bees.

True to his description, Nomad's special ability is called Rejack, and it lets him recover from near-death situations by injecting a nano particle solution. "It's designed to make you mad," multiplayer designer David Vonderhaar laughed as he walked back onstage after the demo.

One thing to keep in mind about these powerful new offensive tactics: Weapons and abilities are mutually exclusive. You'll have to make a choice between Glitch and the nano machine-filled gun. And you'll have to do that before each match.

FROM EVOLUTION TO REVOLUTION

What makes a Call of Duty game?

It can't be the developer, because the series has rotated between several for years. It's not a gameplay mechanic, because even Halo now lets you aim down the sights. It can't be a guaranteed, buttery smooth 60 fps presentation, because more and more games are achieving that presentation as hardware gets more powerful. It's not reality-based combat, as Advanced Warfare proved last year.

Call of Duty is not one thing. It's a combination of things — kill streaks, rewards, loadouts, presentation, annual releases, series — but it's becoming increasingly different. It's evolving. Released only five years apart, the delta between the first Black Ops and and Black Ops 3 is enormous.

After Advanced Warfare last year, many people wondered how the series would continue after making so many changes. How do you return to reality after millions of players get used to Exosuits?

Call of Duty: Black Ops 3 answers that question definitively: You don't. You iterate. You keep the new and you add your own twists. You change, all while keeping the core Call of Duty experience.

Call of Duty is a modern-day version of Theseus' paradox, a thought experiment that goes like this: You build a ship. Over time, it wears down. It breaks. One by one, you replace the wooden boards, the planks until none of the original components remain. Is it the same boat?

No, Call of Duty: Black Ops 3 is not that drastic. It is unmistakably a Call of Duty game. But it's different. Evolved. You can swim in multiplayer now. It used to be a series about realistic weapons and quick deaths. Halo was the domain of science fiction. Not anymore. Call of Duty doesn't have shields, but it no longer seems strange to think it might.

And yet, despite all that, and even though I can't quite explain how or why — or whether players will embraces these changes — its core is still alive, still shooting.

But this time, you might be a robot with a gatling gun. And you don't have to press A to mantle.