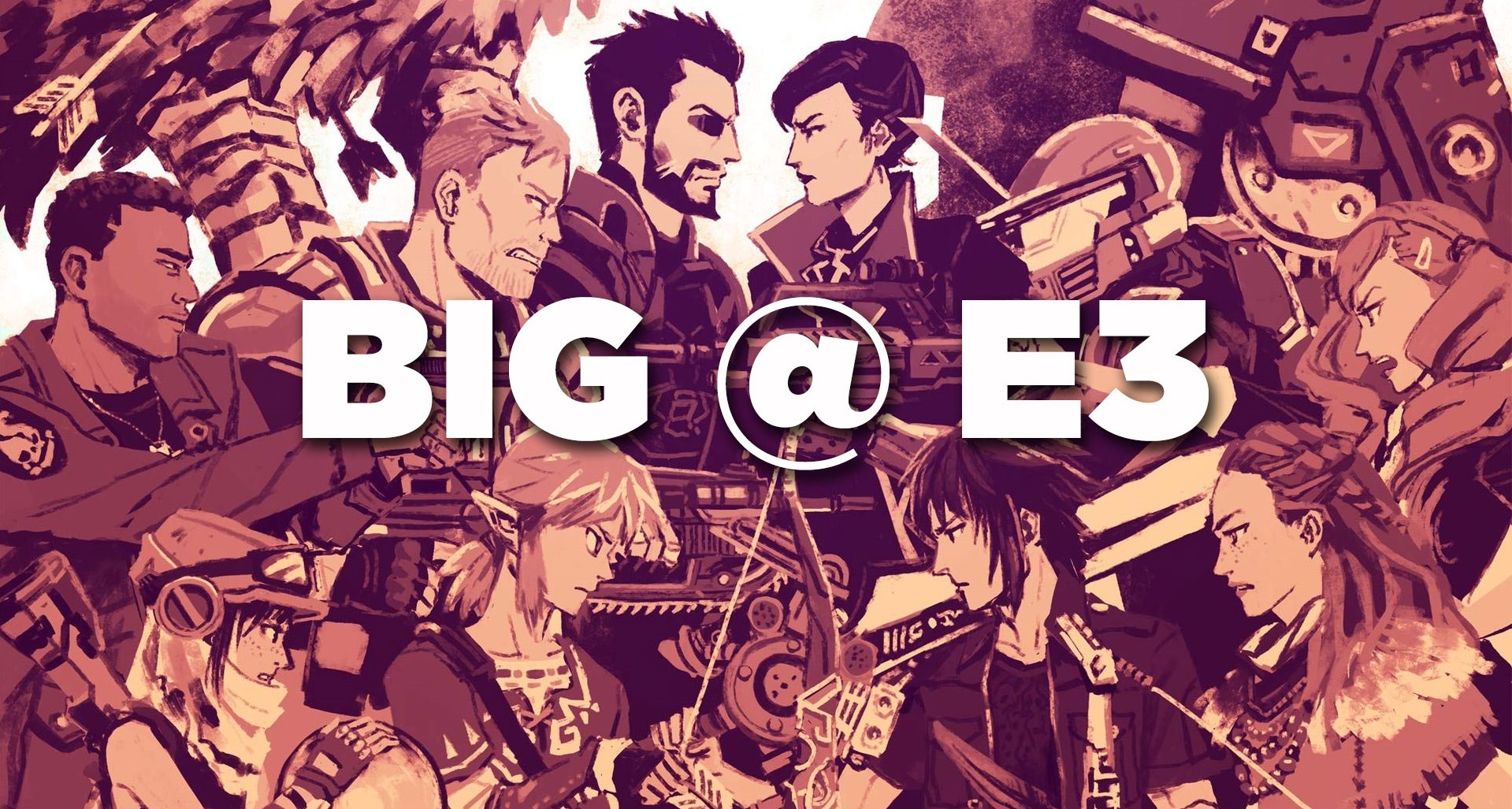 With E3 being the biggest week of the year in our little game media world, it can be easy to get lost in all the news, press conferences and livestreams. A trailer here. A quote there. So for this year’s show, we’re picking out some of the biggest and best games of the show and doing in-depth features on them.

We’ll be mixing in original interviews, hands-on impressions where possible and any new details we can pick up at the show. With any luck, these stories should tell you everything you need to know about these games at the show. Check out the list below, and be sure to check back as we’ll update this page throughout the big show.


In the Mass Effect trilogy, Commander Shepard was already a hero. No matter which origin story players chose for their Shep, male or female, the commander had already demonstrated bravery, resourcefulness and, above all, the ability to lead.

That's not exactly the case for Mass Effect: Andromeda.

"This is a story about becoming a hero," creative director Mac Walters told Polygon at E3.


In an era of bigger, "better" sequels, Gears of War 4 is drawing back.

"When we got certain decision points, we had to ask if we'd really blow it out of the box and go crazy, or do we prove to ourselves and our fans that we know what Gears is about," said Gears co-creator and head of current Gears of War stewards The Coalition Rod Ferguson. "We tended to choose the latter."

In speaking to Rod Ferguson several times since last year’s lead up to Gears of War Ultimate Edition’s release on Xbox One, he’s repeatedly discussed the sense of almost over-completion that accompanied Gears of War 3’s release back in 2011. "I over-scoped that project as a producer because we didn't think we were ever going to put it into a next one," Ferguson said. "So we didn't cut very much." That quest to go bigger, to do more, in some ways diluted or distracted from the core of what Ferguson, and now The Coalition, believe made Gears of War distinctive in the first place.


The original Watch Dogs was a grossly overhyped open-world crime spree that was guilty of hacking all the worst aspects of E3.

Shown for the first time at E3 2012 — a time of intensive next-generation publicity overheating — Ubisoft oversold its looks and its levels of innovation. Elements of the media fell into line with absurdly gullible proclamation that the company had "won" E3, and that video games were about to make a Damascene transformation.

When it finally arrived two years later, Watch Dogs turned out to be a reasonably entertaining open-world game that toyed with a few neat ideas, making use of hacking mechanics.

But it mainly followed pre-existing formulae for action games. Worse, it made serious narrative missteps with a deeply unlikable leading man as well as crude portrayals of secondary characters, most especially women and minorities.

Based on a 20-minute session playing sequel Watch Dogs 2 earlier this week, it's clear that developer Ubisoft Montreal has made significant advances.


Cleopatra is pissed with me and frankly I'm a bit upset about the whole thing.

She and I have only known each other five minutes. Me being the Emperor of China and her being the Pharaoh of that one other notable civilization, Egypt, I just assumed we'd get on famously. I was wrong.

When we first met, about 10 Civilization 6 turns ago, I was quite taken with her. She's beautiful and, well, I'm a passionate man who appreciates beauty, even in the form of cartoonish artificial intelligences.


Marcus Rashford was born in Manchester, 19 years ago. Until earlier this year, very few people had heard of him. That all changed in February when he made his English Premier League debut for Manchester United, scoring two goals against Arsenal. Rashford is now an England player, part of the exciting young squad currently competing in the European Championships.

Rashford's story is the sort of romantic stuff loved by sports fans throughout the world: a local lad with talent, rising to the top. In English football, suxh stories echoes down the years, from Tom Finney and Nat Lofthouse to Bobby Moore and Paul Gascoigne.


Saints Row 4 ends as only a Saints Row game can: With the crew hanging out on a spaceship, controlling the galaxy and dancing to Montell Jordan's "This Is How We Do It."

The question on my mind — and doubtless on the mind of a lot of the series' fans — was, "Well, where do you go from here?"

The answer, according to Volition design manager Anoop Shekar: You don't.


Mafia 3's Lincoln Clay is one of at least three black characters fronting major narrative games this E3, the other two being Watch Dogs 2's Marcus Holloway and the as-yet unnamed warrior on the cover of Battlefield 1.

With few exceptions, games companies have been reluctant to portray African-American characters as anything other than villains, sidekicks or comic relief. Big budget American or European video games — usually created by teams dominated by white men — have rarely touched on the issue of race and prejudice.

Clay's story is rooted in a particular time and place where racial division and prejudice are woven into everyday life. He lives in a lightly fictionalized version of Civil Rights-era Louisiana. This is a world where "Whites Only" signs remain on walls.

The Unspoken and Feral Rites


Insomniac Games — best known for the Spyro series, Ratchet & Clank and Resistance — seems to be a strong believer in the magic of VR.

We recently visited Facebook's campus to spend some time with the E3 demos of Insomniac’s upcoming Oculus Rift games The Unspoken and Feral Rites. Both titles will release later this year, and mix together elements of in-game magic with the still new and evolving frontier of VR technology.


Ubisoft says that Tom Clancy’s Ghost Recon Wildlands will be the first military shooter ever to be playable, start to finish, in four-player cooperative mode. The tactical first-person shooter, known for letting players work together or with small teams of computer-controlled allies, will allow ad hoc drop-in and drop-out play from the start. That strategic choice, said lead game designer Dominic Butler in an interview with Polygon, was one of the foundations for the entire game, and represented a significant technical hurdle.


When Infinity Ward's Jacob Minkoff and Taylor Kurosaki, design director and narrative director, respectively, on this year's Call of Duty, talk about the story they want to tell, they reference two now-classic war movies.

The first is Black Hawk Down, Ridley Scott's 2001 film about the 1993 Battle of Mogadishu. Scott's movie, Minkoff and Kurosaki said, cinematically embodies the motto "no soldier left behind." No matter the outcome, "you fight for the guy next to you," Minkoff said.


"As important as PC gaming was to our history, virtual reality is to our future. Virtual reality is a factor for every system that we’re designing moving forward and it has been for awhile."

Formed 20 years ago by a pair of friends who loved games and were big fans of The X-Files, Alienware remains a powerful player in the world of PC gaming. Ten years ago, the company was purchased by Dell, but general manager Frank Azor says all that did was allow the company to reach a broader audience and empower its innovation and ability to take chances.


Real-time strategy games are also — even by the standards of video games — dreadfully violent. Factories are built to churn out military units, which are then thrown into battle with the full expectation that they will all be slain. Traditionally, the RTS is about killing things in large numbers.

Little wonder that the grunt smiles at his own demise. Wouldn't you?


Battlefield 1 will span the full length of World War I, from 1914 to 1918, with a robust campaign designed to deliver myriad perspectives through a collection of shorter stories that take place in different times and locations around the world.

Everything we know about Battlefield 1.


Titanfall 2 will bring with it just about everything everyone was hoping it would and more. The game will be coming to Xbox One, Windows PC and the PlayStation 4, it will bring refined multiplayer, more mechs, a meaningful story-driven single-player campaign and introduce a personality of sorts to those hulking mechs.

Everything we know about Titanfall 2.


Ocean life and strangeness are the intertwined themes of Abzu, a soulful submersion into a place of beauty, movement and color. Abzu is also an illusion, offering the promise of free exploration while gently guiding players along a predestined path, lured along by music, light and flow.


With more than a million people signed up for the beta, Paragon is getting not one, but two massive overhauls in an effort to improve the game. Heroes are being reworked, sprint is dropped and much, much more.


As well as its main story, Deus Ex: Mankind Divided has a whole new mode, an entire new section with its own look, feel, rules and characters. Called Breach, it's a neon celebration of technology and all its dark potential for wickedness.