From Starhawk's backwards single player design to lessons learned from the beta, we chat with the game's developer while playing through the first level.

Starhawk is meant to be much more than simply Warhawk in space. While it's a spiritual sequel to that 2007 multiplayer-only, third-person shooter, it delivers much more depth to its online experience, and a single-player campaign built around a rich, new science-fiction universe.

It's that single-player campaign that Dylan Jobe, president of developer LightBox Interactive, knows fans are most curious about, and perhaps most worried won't succeed.

After all, Warhawk had a single-player campaign too, at one point, but the developers ultimately killed it after deciding it wasn't going to live up to the rest of the experience.

We sat down with Jobe to play through the entire first level of the campaign to talk about those concerns, the design ideas behind the game's interesting build-and-battle mechanic and the changes they made to Starhawk after the recently closed beta test.

Starhawk will feel familiar to anyone who's played Warhawk. It too is a third-person shooter with grungy vehicles and chunky graphics. Some key additions to that core experience include a revamped Warhawk, simply called the Hawk that can transform from a futuristic jet into a ground-pounding mech, and Sidewinder jet bikes that can hop short distances.

The biggest shift, outside of the futuristic setting and backstory, is the game's Build and Battle mechanic. Players fight for Rift energy, an in-game currency of sorts. They can then use that energy to call down structures like bunkers, turrets and walls, from an orbiting drop ship.

It sounds more complicated to perform than it is. A player can quickly pull up a selection wheel while running around, place a hologram of a building on the ground and then get back to the fight. A few seconds later the building drops to the dirt, crushing anyone beneath it, and then essentially finishes building itself.

While the game's multiplayer will likely be where players spend most of their time, the game will also come with a cooperative horde-mode and a single-player campaign.

LIGHTBOX INTERACTIVE BROUGHT IN THE CONCEPT ARTIST FOR DARTH MAUL TO BUILD THEIR UNIVERSE.

LightBox Interactive brought in Ian McCaig, a concept artist who worked on the Star Wars,Harry Potter and John Carter of Mars films. He was the guy who designed Darth Maul and Padme Amidala. And now he's the guy who helped design the look and universe ofStarhawk.

The end result is the story of Emmett Graves' life as a hired gun and his fight against his own mutating body, caused by a rift energy explosion that also mutated his brother.

"Players are a little bit still unsure what to expect from our single-player campaign," Jobe said. "We're real happy with the way it turned out."

Jobe says the campaign is about the length of a typical Call of Duty campaign, or about six hours. 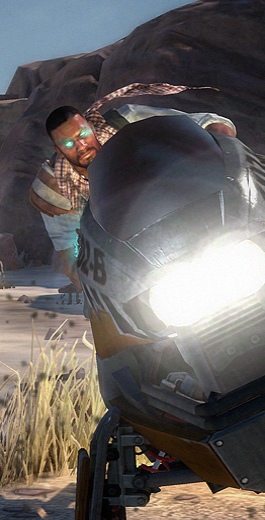 While the game will bring the general feel of the Warhawk with it when it hits the PlayStation on May 8, it won't have the ability to support Warhawk's unusual four-player, split-screen gaming.

It's a bit of a disappointment for fans of Warhawk who enjoyed the opportunity to play with so many people on a single television, but Jobe said when they looked at how often that option was used, the investment in development wouldn't be equal to the enjoyment had by players.

And while some fans may be unhappy with the decision, split-screen wasn't one of the many things they heard people calling for during their open beta test. And the Starhawk developers were listening very closely to those early game players.

WE TALK WITH DEVELOPER DYLAN JOBE AS WE PLAY THROUGH THE ENTIRE FIRST LEVEL OF STARHAWK. 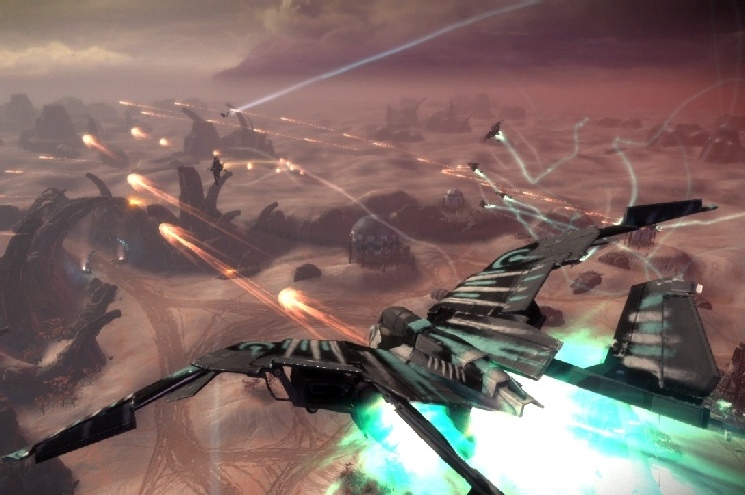 "We pitched Sony the concept of doing a real beta," Jobe said.

That meant that they went into the open beta knowing that they would be listening to what players of the game had to say about it and, when possible, making changes on the fly. Jobe said they developed a system that allowed them to quickly roll out changes and updates while the beta was still running.

"Our beta was a live interaction with our fans," he said. "We were releasing updates every 48 hours, every 72 hours."

And there were some surprises for the development team. The biggest was how passionate many of the players were about the inclusion of Warhawk's arcade flight mode.

"Holy shit these guys really want arcade flight mode back," he said. "So we went back to our (Warhawk) code base and pulled out the arcade mode, wired it in to the systems and rereleased it to the fans of the beta."

The end result from the beta is a multitude of changes, some small, some not so small, that will hit the game as a day one patch.

Having played through the entire first level of the game (you can see an edited version of that in parts of the video above), I can say that the campaign seems to deliver a fast-paced, open-ended experience. While it neatly explains how to play the game, what I played hints at the sort of story-driven narrative some shooter fans anticipate.