Spec Ops: The Line: multiplayer in a fog of sand

Share All sharing options for: Spec Ops: The Line: multiplayer in a fog of sand

Developers Yager and 2K Games upcoming Spec Ops: The Line has enjoyed a successful reintroduction in 2012 after going dark back in 2010. The Heart of Darkness inspired shooter seems to have the chops to be something more than the standard third-person military title, with good voice acting, an interesting story, and some great level design and gunplay.

But over the last six months, 2K and Yager have been silent on the otherwise-announced multiplayer component in Spec Ops: The Line. This is especially odd given the invite-only public beta for Spec Ops back in the summer of 2010, a beta that seemed in part responsible for the game's lengthy delay.

After 18 quiet months, I finally had a chance to spend an extended period with Spec Ops: The Line's revamped online component. I came out encouraged, but some big questions remain, including how Spec Ops: The Line can hope to be competitive in the online space - or whether it needs to be.

As I sat down to play Spec Ops: The Line's multiplayer, my immediate question was one of setting.

Yager has heavily emphasized the story aspect of Spec Ops: The Line at both of the events I've been to in the last six months, which comprised around five hours of the singleplayer game. Narrative is omnipresent - from firefights to quiet moments, Yager has put quite a bit of effort into establishing the world of post-sandstorm Dubai.

The literary influences in Spec Ops: The Linehave often reminded me of the BioShock series, which built its foundation on a stinging rebuke of objectivism and the writings of Ayn Rand. Multiplayer added without thought could be harmful to the campaign and the story and messages contained therein, and smartly, Yager and 2K are borrowing a page fromBioShock 2's playbook.

Senior Producer at 2K Games Denby Grace explained that Spec Op's multiplayer takes place before Walker and his team arrive in Dubai in the campaign, during the initial war between the mutinous "Exiles" and the "Damned 33rd" forces still loyal to the mysterious Konrad.

Multiplayer as a Prequel 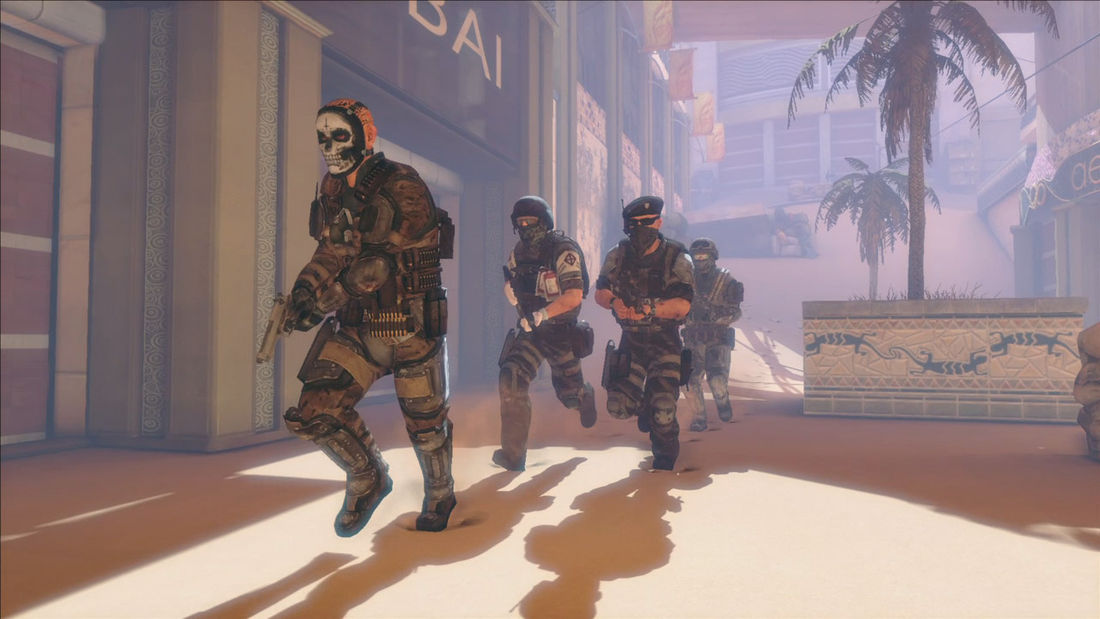 While the move to set Spec Op's multiplayer before the main game doesn't do much to add to the game's fiction, it does do a tidy job of making sure it doesn't screw it up.

In the meantime, 2K Games (separately from Yager, who are dedicated entirely to the singleplayer aspect) led by main members from BioShock 2's multiplayer team, have nailed down an MMO style class system to serve as Spec Ops' foundation. It's a smart idea. Instead of the usual difference in weapons and secondary abilities - which are still present - classes in Spec Ops come complete with buffs and bonuses that effect teammates within a specific range of the player in question.

At least, that's supposed to be what happens. While I don't doubt that there was ... something happening, it was difficult to get a real sense of the bonuses from my teammates really effecting my immediate combat capabilities. My performance as an assault class didn't seem particularly changed within proximity of a gunner class, and I didn't find myself living much longer with a medic in sight.

I don't think it will stay that way, mind you. 2K Games seems to understand that Spec Ops: The Line needs that extra sort-of oomph, that certain something to set it apart, and the area-of-effect bonus is a good idea that hasn't seen much use outside of MMOs. It just isn't really working yet.

Still, Spec Ops has an ace up its sleeve in Buried mode. While Mutiny and Rally Point are fairly typical iterations of Team Deathmatch and King of the Hill (or rather, Crazy King from the Halo series), Buried is something different. Each team in Buried has three weak points designated for attack by the other team. While each of these points are well armored and can be repaired by any team member, once all three points are down, a final weak spot is revealed within the enemy base. Taking that takes the match.

While the other modes work, Buried adds a unique sense of the frantic to Spec Ops. All multiplayer matches are limited to two teams of four. Buried matches have three objectives at any given time to be protected and destroyed, which means something is always uncovered by the opposing team. It emphasizes the tenets that 2K is going for with the multiplayer in general: small teams, small maps, lots of contact, lots of action. Throw in the randomly occurring sandstorms that obstruct everyone's vision and disable both teams' radar, and it's a recipe for madness.

This is a good thing.

It's nice to see that 2K is doing their due diligence in bringing thoughtful multiplayer toSpec Ops: The Line. The question is whether it will mean much when Spec Opslaunches in June. While multiplayer retains the dangerous, brutal feel that guns in the campaign demonstrate, and Buried is a lot of fun, the question remains as to whetherSpec Ops will be able to not only find an audience, but retain it. Regardless, hopefully 2K will make the tweaks they need to in order to guarantee Spec Ops' multiplayer is everything it could be.