By now you've probably already heard this morning's announcement that MLB.TV is coming to Xbox 360, and in fact, is already available, just in time for the unofficial start of the 2012 season. But last week, I was given a demonstration of MLB.TV on Xbox Live, with an emphasis on how custom tailored to the Xbox 360 versus other platforms offering the service - and that goes beyond the expected Kinect gesture and voice support.

For those unaware, MLB.TV is a subscription service offered by Major League Baseball featuring live streaming of every professional baseball game broadcast. MLB.TV is $124.99 a year, and a subscription allows access across all platforms.

MLB.TV ON XBOX 360 IS SUBJECT TO THE SAME BLACKOUT AS LOCAL BROADCASTS

First, the mixed news. MLB.TV on Xbox 360 is subject to the same blackout rules that apply to local game broadcasts. According to Microsoft, this is IP based. It's unfortunate that the Xbox Live implementation of MLB.TV is restricted by broadcast rules that seem about eight years behind the current state of technology and services, but it's not particularly surprising - this is an MLB.TV restriction across all portals, from your PC to your PS3 and now your Xbox 360.

Of course, if you were to access the service through an out-of-market based IP address, you'd be able to access those games without issue, and more practically speaking, blacked out games are archived and available after broadcast.

Unlike the Xbox Live UFC app, MLB.TV is restricted to Xbox Live Gold subscribers. All Gold subscribers get one free game a day on the app as well as game recaps, which is standard for MLB.TV, but their experience is otherwise limited without a subscription.

FOR ARCHIVED GAMES, SOX FANS SHOULDN'T HAVE TO LISTEN TO MICHAEL KAY, AND YANKEES FANS DON'T HAVE TO DEAL WITH JERRY REMY 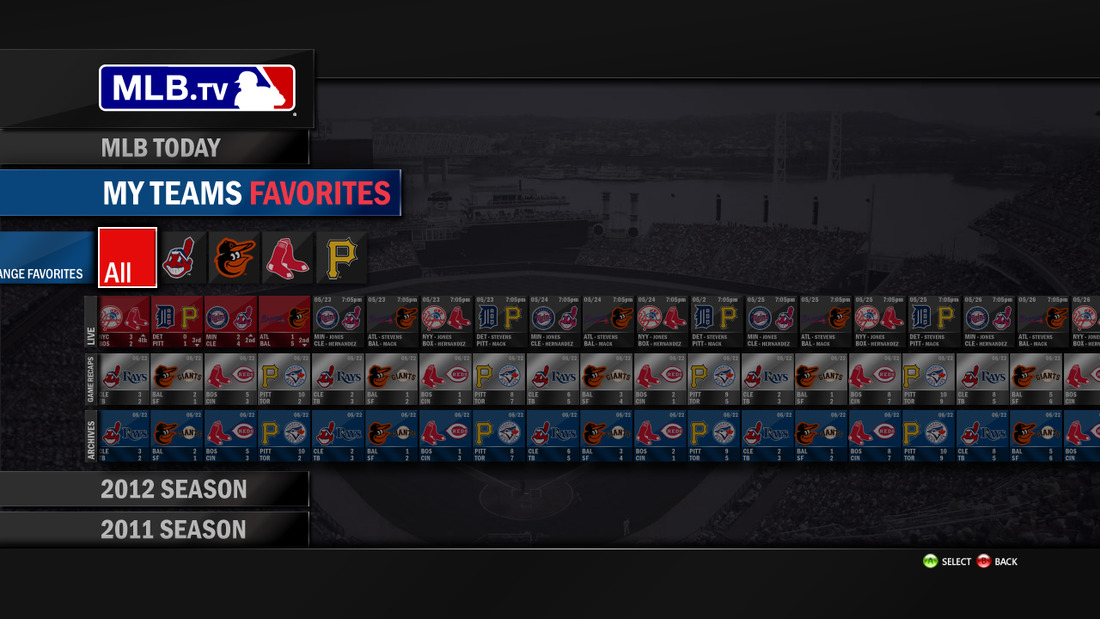 Broadly, MLB.TV on Xbox Live offers the same experience available on existing platforms: every game for every team (barring the restrictions indicated above), and every game recapped and archived for viewing at any time afterward. The 2011 season is already available for subscribers, including post-season games from last year.

The initial experience is oriented around your baseball preferences. Specifically, you'll be directed to pick your team or teams, which will determine the main content that MLB.TV on Xbox Live recommends when you sign in. Once your teams are selected, you'll see the option to view any currently in progress games, watch recently archived games, or as mentioned above, watch previous seasons - though 2011 is the only archived season available at this time. 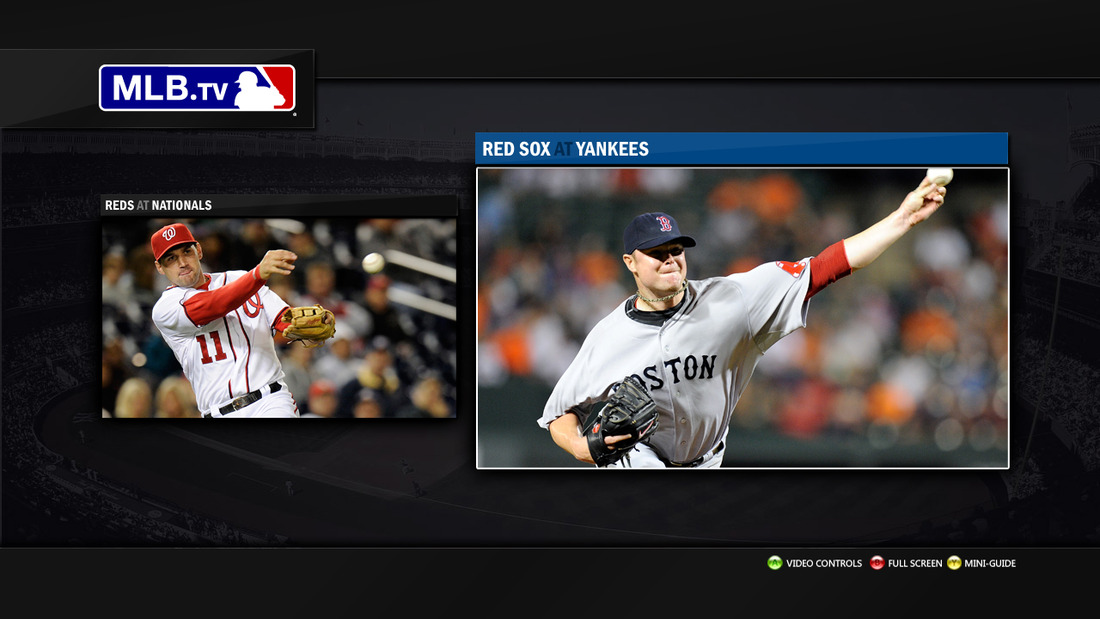 Archived games often have home and away audio feeds, unless those games were originally broadcast nationally on one network. You can also use voice commands to skip through the top or bottom of innings when running through archived games rather than having to fast forward manually, all while enjoying the color commentators you're used to hearing - Sox fans don't have to listen to Michael Kay, and Yankees fans don't have to deal with Jerry Remy.

It was less clear if this same luxury applied to live games, but there are other neat features to the service. During live viewing, you can watch two games simultaneously in split-screen, usingKinect voice commands to switch between views. This is especially handy during the empty spaces where commercials would be on the live television broadcasts.

While watching live games, users can bring up the mini-schedule to see what other games are going on and the schedule for the rest of the day, and in a stroke of thoughtfulness, game listings can be viewed with or without scores visible (they're off by default). It's a nod to the nature of time-shifted viewing habits in the modern era - nobody wants a game they haven't watched spoiled for them. 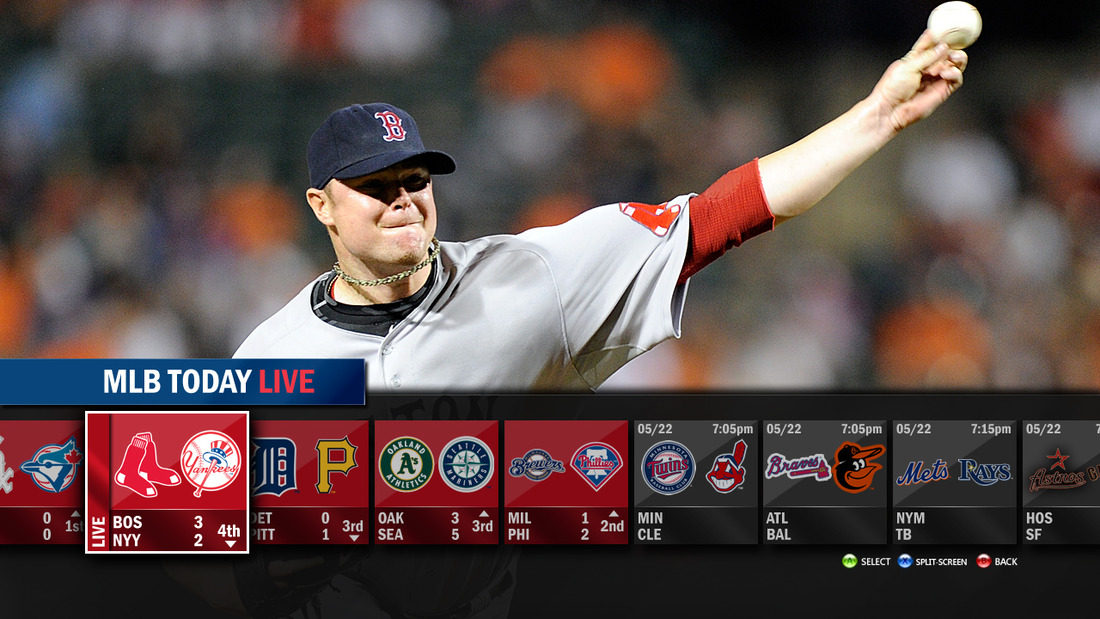 The other details are mainstays of Xbox Live video apps - all regular season games are streamable in HD at 720p30, which is the max supported by Major League Baseball at this time, and unlike UFC, MLB.TV doesn't buffer before streaming. Similar to Netflix and the Zune video rental service, games start at a lower bitrate and quickly improve as the service determines what quality your internet connection can comfortably sustain.

Microsoft is hoping to add social features at a rapid clip, including event and player tagging, though full fantasy league support is obviously not happening for this season. They hope to iterate continually on the service, as demonstrated by other apps like UFC and ESPN3 on Xbox Live.