A few weeks in and now there are tons of games that support the new iPad's Retina display. Here are some of the very best.

After the iPhone 4 launched with its Retina display, it took some developers a sizeable amount of time to upgrade their iOS games to make sure they didn't look like a blurry mess on the higher resolution screen. But, with the new iPad (which launched just a few weeks ago), everyone was ready. The resolution increase came as a surprise to no one and iOS devs have been quick to pivot, boosting their apps to support the new 2048×1536 screen.

Right now there are over 800 games that support the new iPad's Retina display. That's a lot. But we're here to try to cut that down a bit for you. We know you want to show off your fancy new tablet and all, but booting up a Retina-friendly version of Solitare is not the way to do it. No, here are some truly impressive titles that will irk just about anyone looking over your shoulder on the subway. 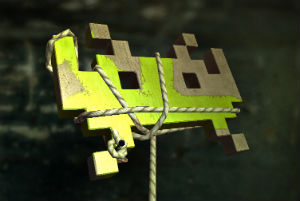 The primary objective of Zen Bound 2 is to wrap wooden shapes with rope. I'm not sure I could come up with a duller premise for a game if I tried. And yet, since it launched on iPad back in 2010, I've played it and replayed it. The title hints at the game's soothing nature, which is at least as calming as raking a garden of sand, with a lot less mess. The developer, Secret Exit, updated the game about a week ago, granting support for the Retina display. The end result is that the blocks you're manipulating now look so crisp and textured that they may as well be sitting on a table in front of you. It's truly remarkable. 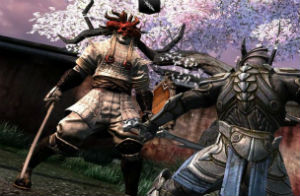 The Infinity Blade franchise has been pushing what's possible in mobile game graphics since the first game was released in 2010. Infinity Blade 2 pushed things even further, designed specifically to make use of the iPad 2's more powerful processor. Apple demonstrated the new Infinity Blade Dungeons for press during the new iPad debut, but that game is still a ways out; Infinity Blade 2, on the other hand, has just been updated to support the new device, with a boost in resolution as well as new rendering effects which were impossible on the old hardware. 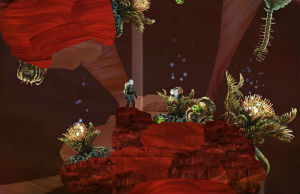 Do you ever stop and think, "I wish Metroid had more gardening!" If so, Waking Mars is the game for you. Made by the folks behind the excellent Spider: Secret of Bryce Manorfor iOS, Waking Mars is a strange blend of exploration and puzzle solving. As an astronaut stranded in the depths of the red planet, you're forced to master horticulture to uncover the planet's secrets. Sure, why not? A Retina display update just dropped last week, which gives the artistic, paper cut out-style graphics a refined sharpness. 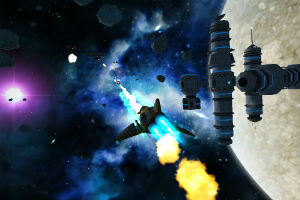 In the '90s, space flight sims like TIE Fighter and Freespace were king. Since then, the genre seems to have been forgotten by the big publishers. Good thing Fishlabs is there to pick up the slack. Galaxy on Fire 2 is nothing short of staggering in its scope, allowing would-be privateers to smuggle, mine and rocket their way through deep space. Constant refinements to the game's controls over the years have made it a breeze to play and the new Retina update has given the graphics new life. It's easily one of the most full-featured space sims in the last decade. 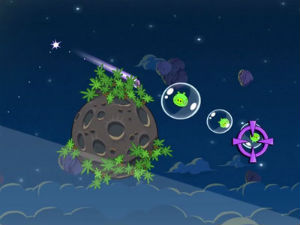 And then there was Angry Birds Space. Eye-roll if you want, but this is easily the best in the series, as I've already explained in a lengthy diatribe. What I haven't been able to mention is just how slick this game looks on the new iPad. Sharp doesn't begin to describe it. It honestly looks like printed, cartoon graphics come to life on the new iPad. I can literally press my nose against the screen and still not see a single jagged pixel. (Note: Not recommended for continued eyesight.) True, it's not a universal app, but at $3 for one of the best looking 2D games I've ever seen, it's a steal.