A look at how games can fit in anywhere.

People play video games all over the world. Games are becoming, in many ways, a form of universal language. Although the manner and places in which people play vary wildly, especially in the resource-poor nations of West Africa.

Nick Hagen is a U.S.-based photojournalist. This series of images is from a recent visit to West Africa, where he sought out places where people play video games. The results paint a striking portrait of familiarity in an utterly unfamiliar place.

"When photographing gamers, I test to see how close I can get to them with my camera and photograph them when I feel like they've completely lost themselves in what they're playing. It seems almost like their self is somewhere between their body and the TV. When this occurs I can stick my lens literal inches from their faces and they barely notice.

"When I pitched a Nigerian contact the idea of finding a semi-pro gaming team to follow, he explained that those don't actually exist in Nigeria because of the poor internet infrastructure. All internet comes from 4G routers on overly stressed networks, meaning that the internet is extremely unreliable and that online gaming doesn't happen here in any meaningful way. Typically online first-person shooters are where teams like I was looking for spring up, so I was barking up the wrong tree.

"Because of the lack of online gaming, local gaming is stronger. This is why all of the tournaments I've been to or heard of have been either one-on-one soccer or fighting games."

Click on each image below to read the captions. 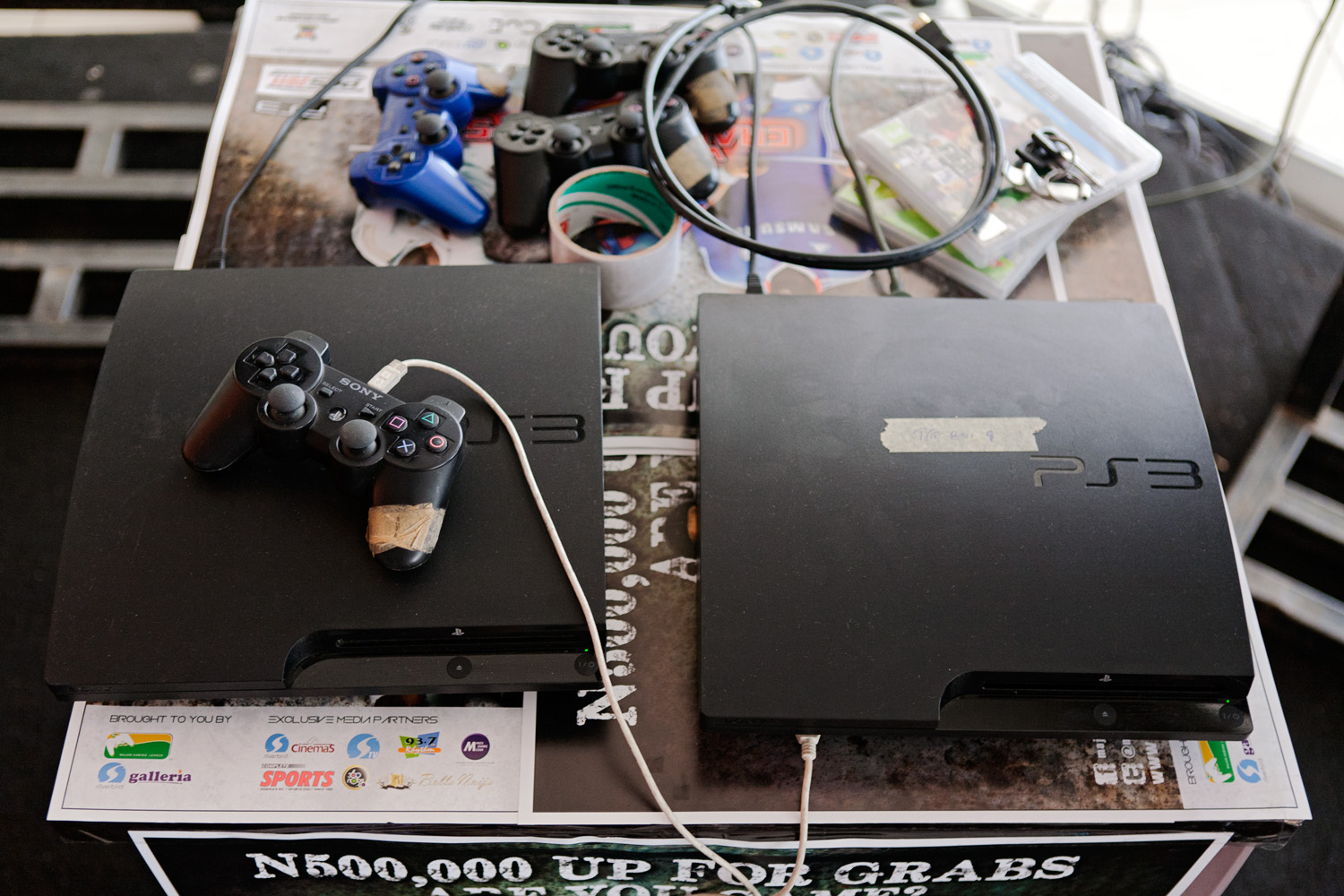 These PlayStation 3 systems are for a FIFA and Pro Evolution Soccer tournament being held by Major Gaming League in Ikeja Mall, Lagos. This was the start of what was meant to be a monthlong gaming competition &mdash; including Street Fighter X Tekken , Call of Duty and Burnout Paradise — taking place in many neighborhoods throughout Lagos, Nigeria. Sadly, the competition was put on hold for financial reasons after four days. 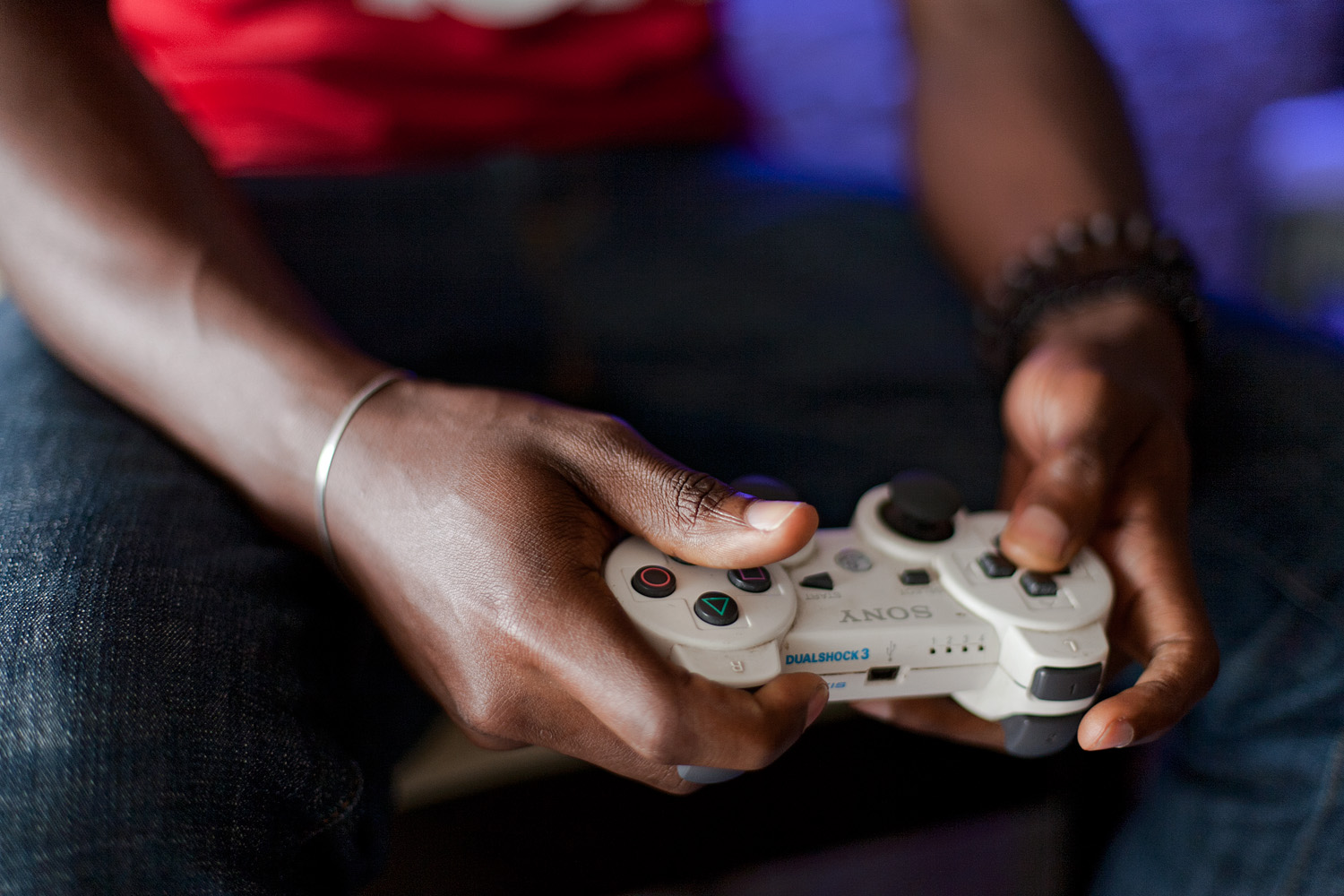 A competitor at a Major Gaming League event in Ikeja Mall, Lagos holds a PlayStation controller. 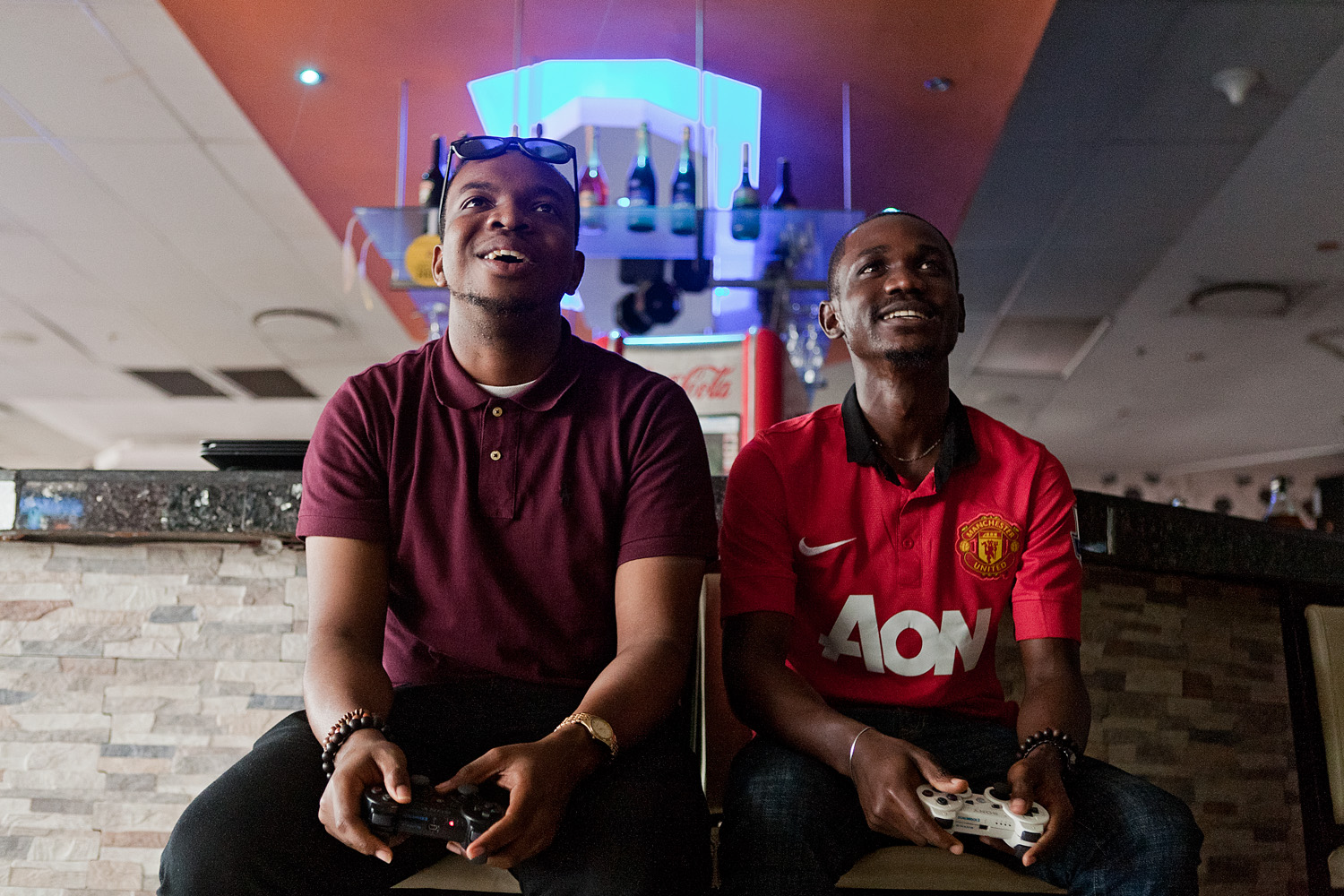 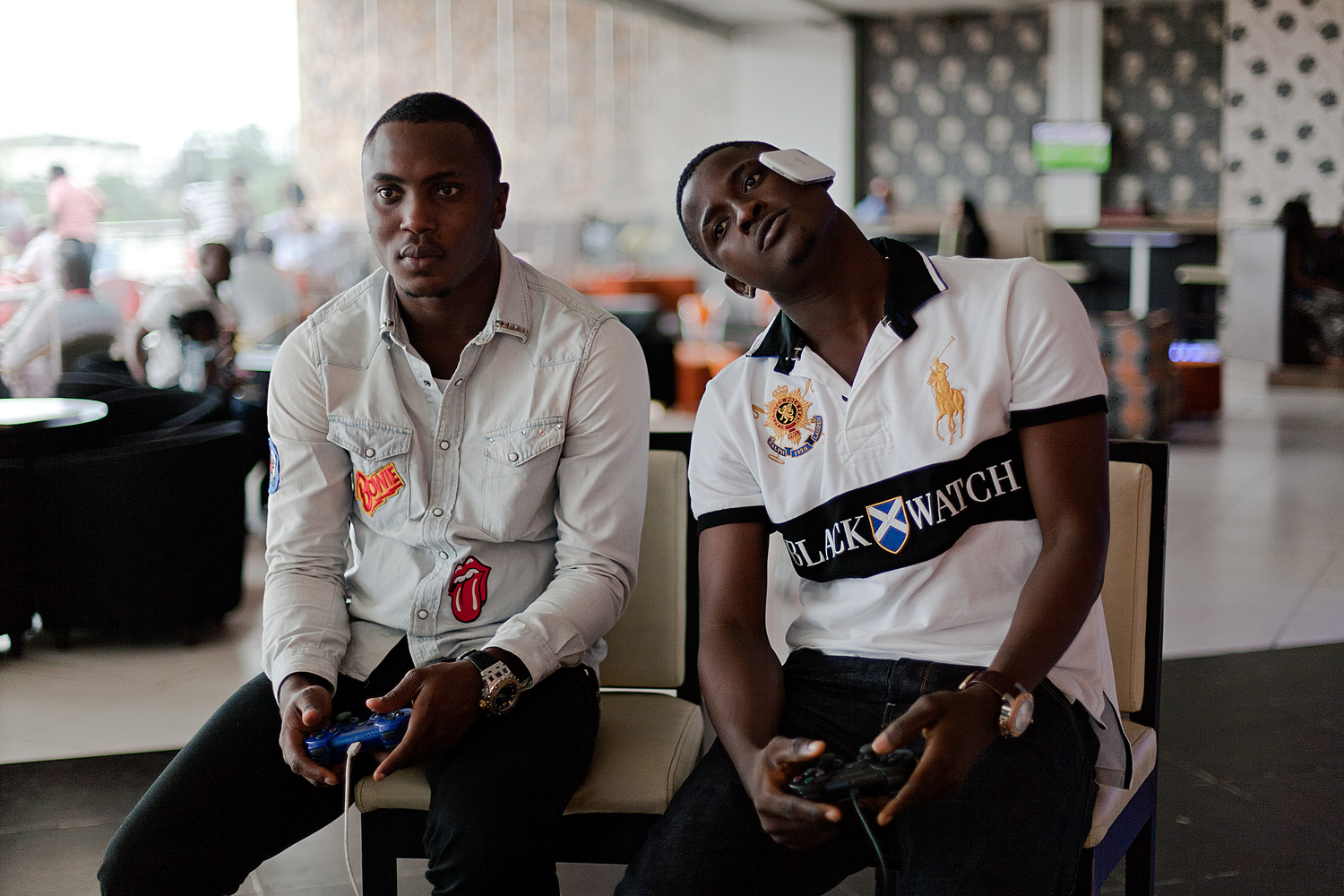 One player takes a phone call while having a warm-up round of FIFA before beginning a Major Gaming League event in Ikeja Mall. 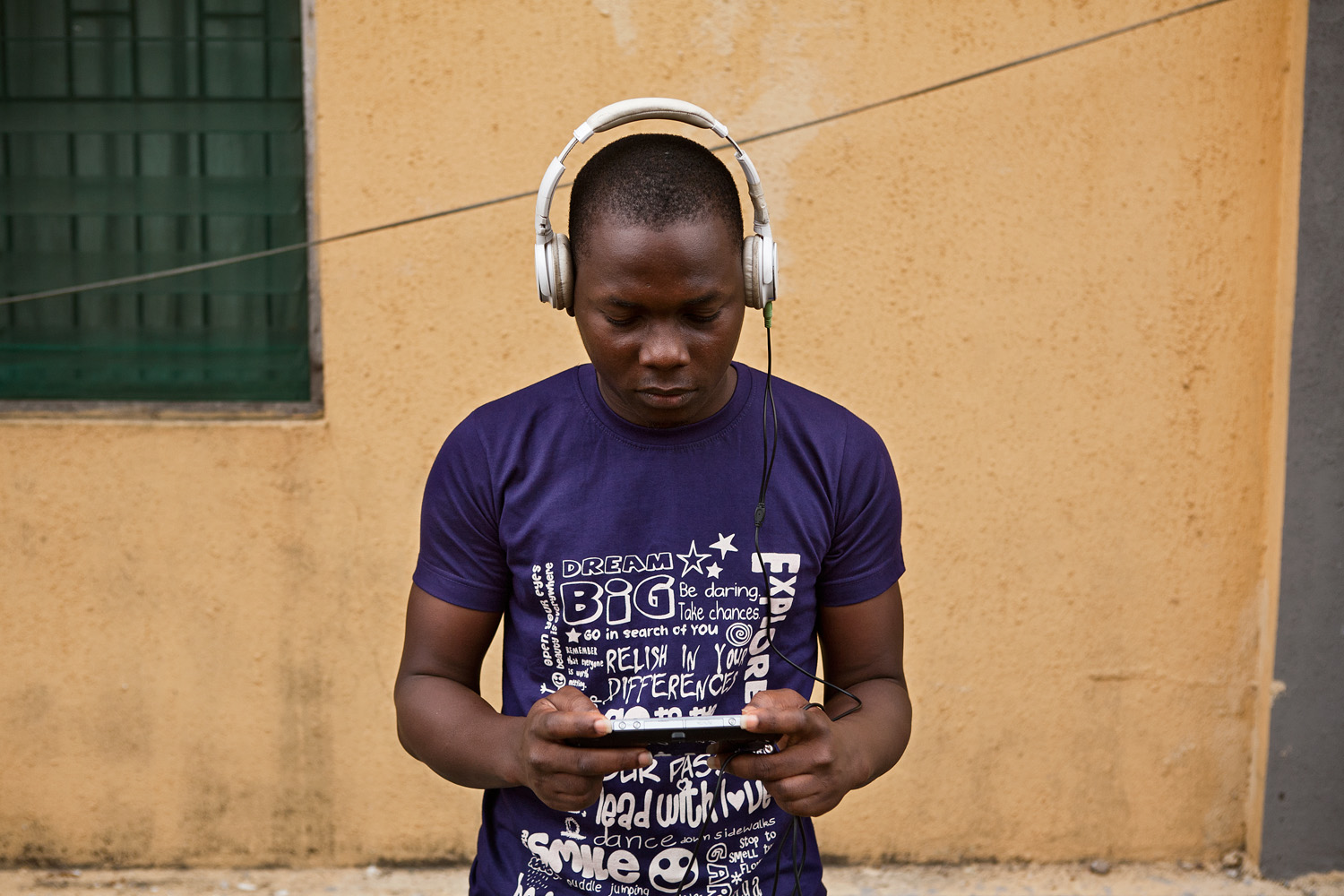 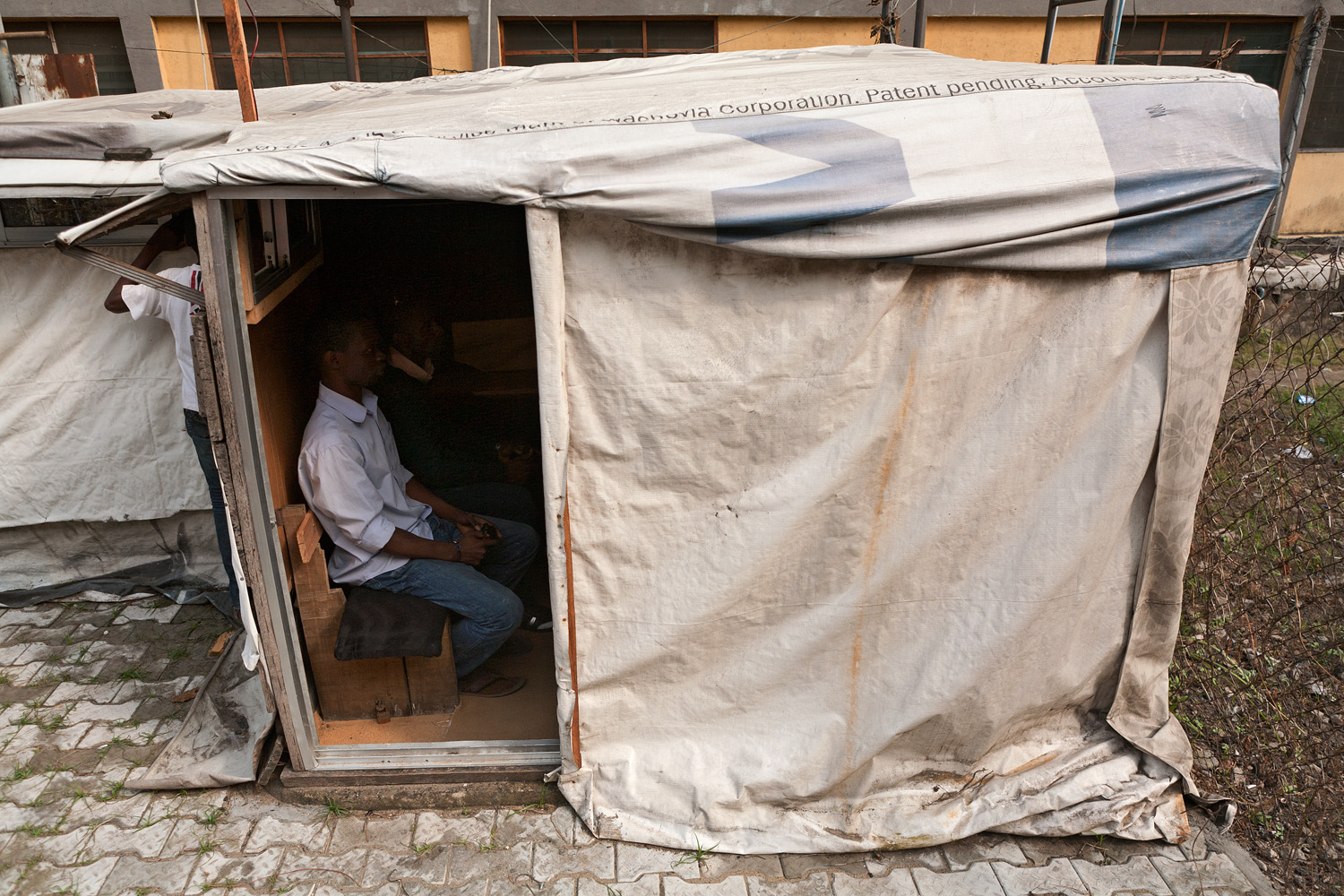 Seyi Olanite sits in his gaming center in Festac, Lagos, playing Naruto Shippuden: Ultimate Ninja Storm 3 against a friend. At Knightz Gaming Center, customers can play any of Olanite's games for the equivalent of 63 cents per hour. Along with the gaming center, Olanite owns a small tech-repair business. 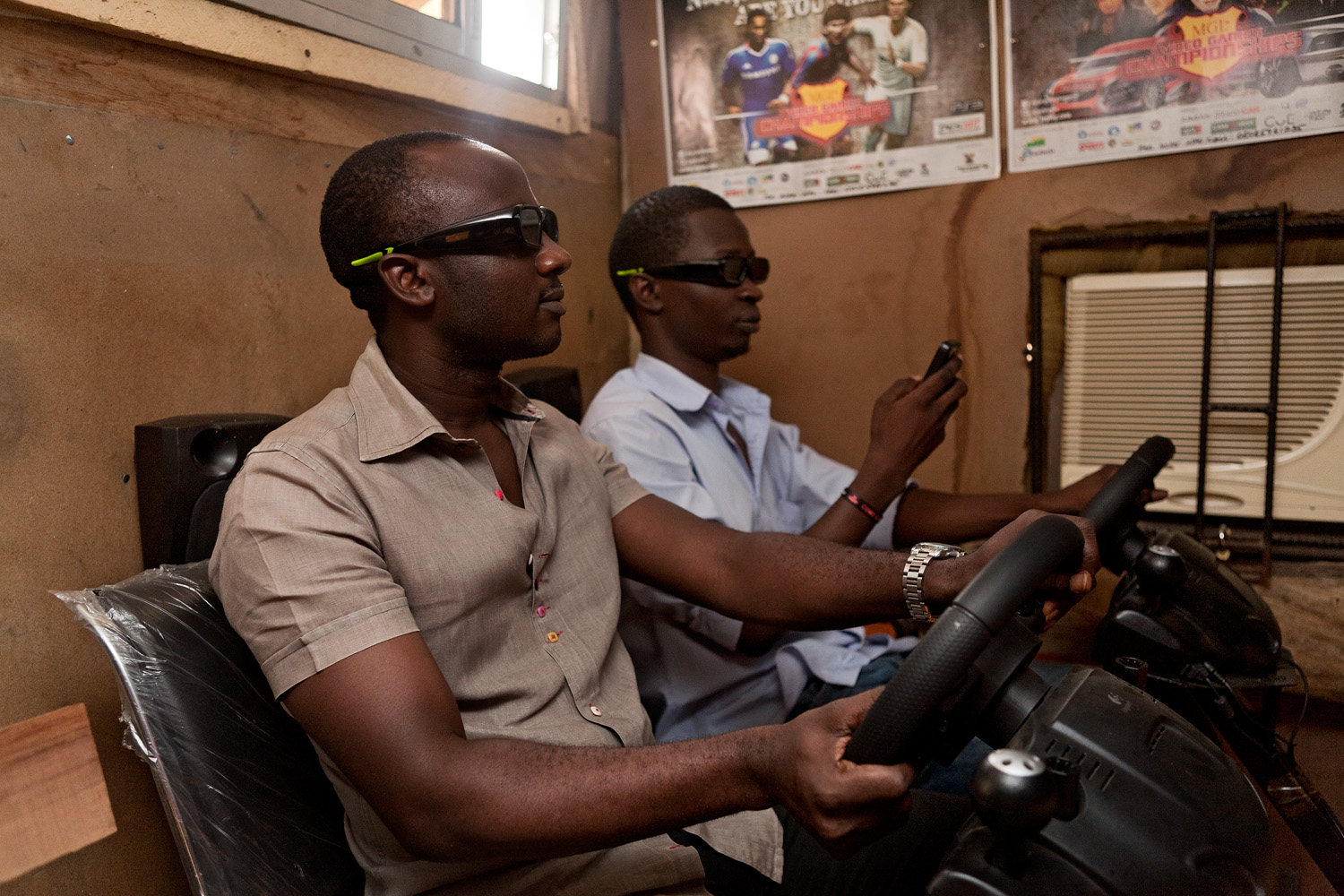 Seyi Olanite texts while playing Burnout Paradise in 3D with the Logitech Driving Force GT Wheel Xbox 360 attachment against a friend in his Knightz Gaming Center in Festac, Lagos. 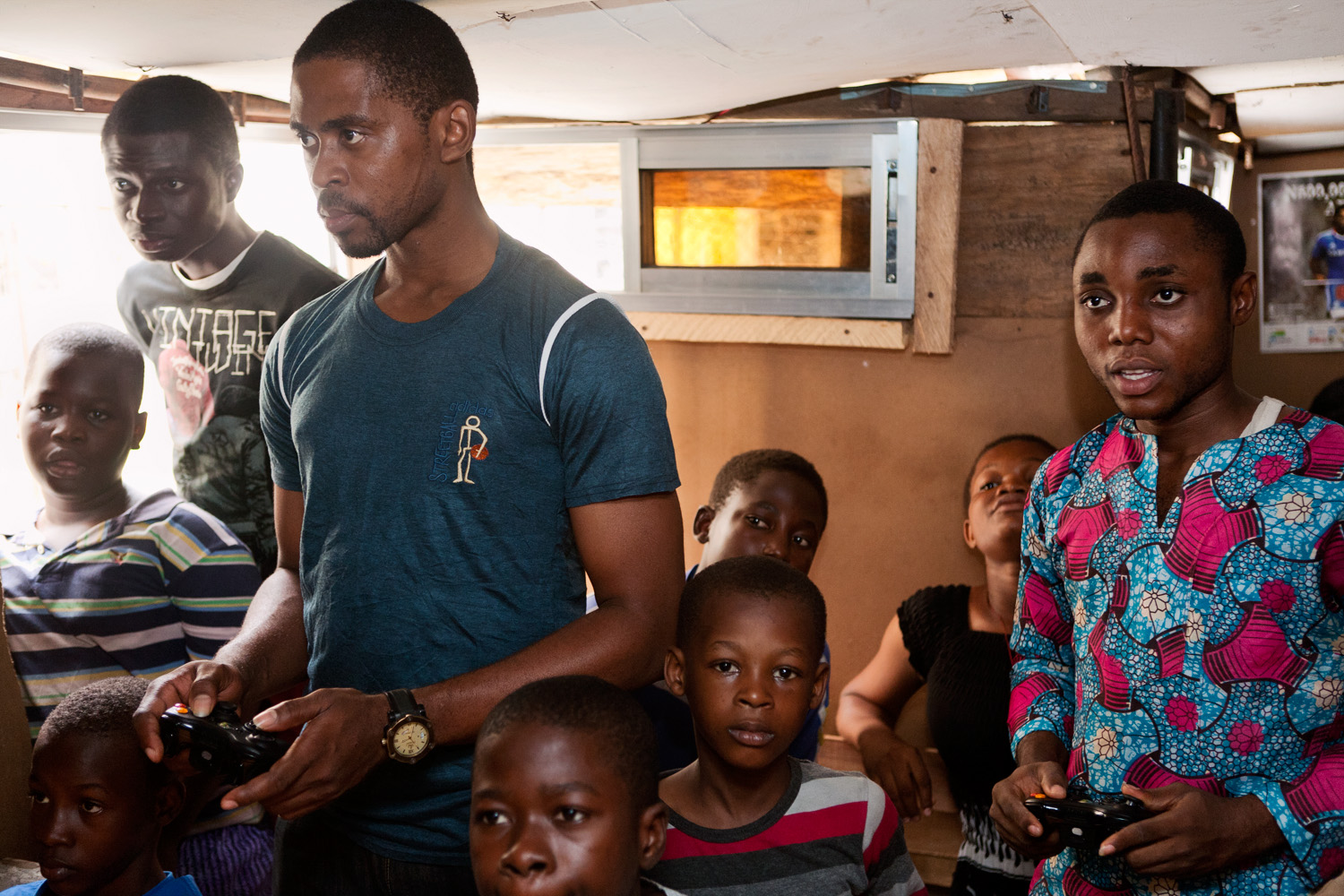 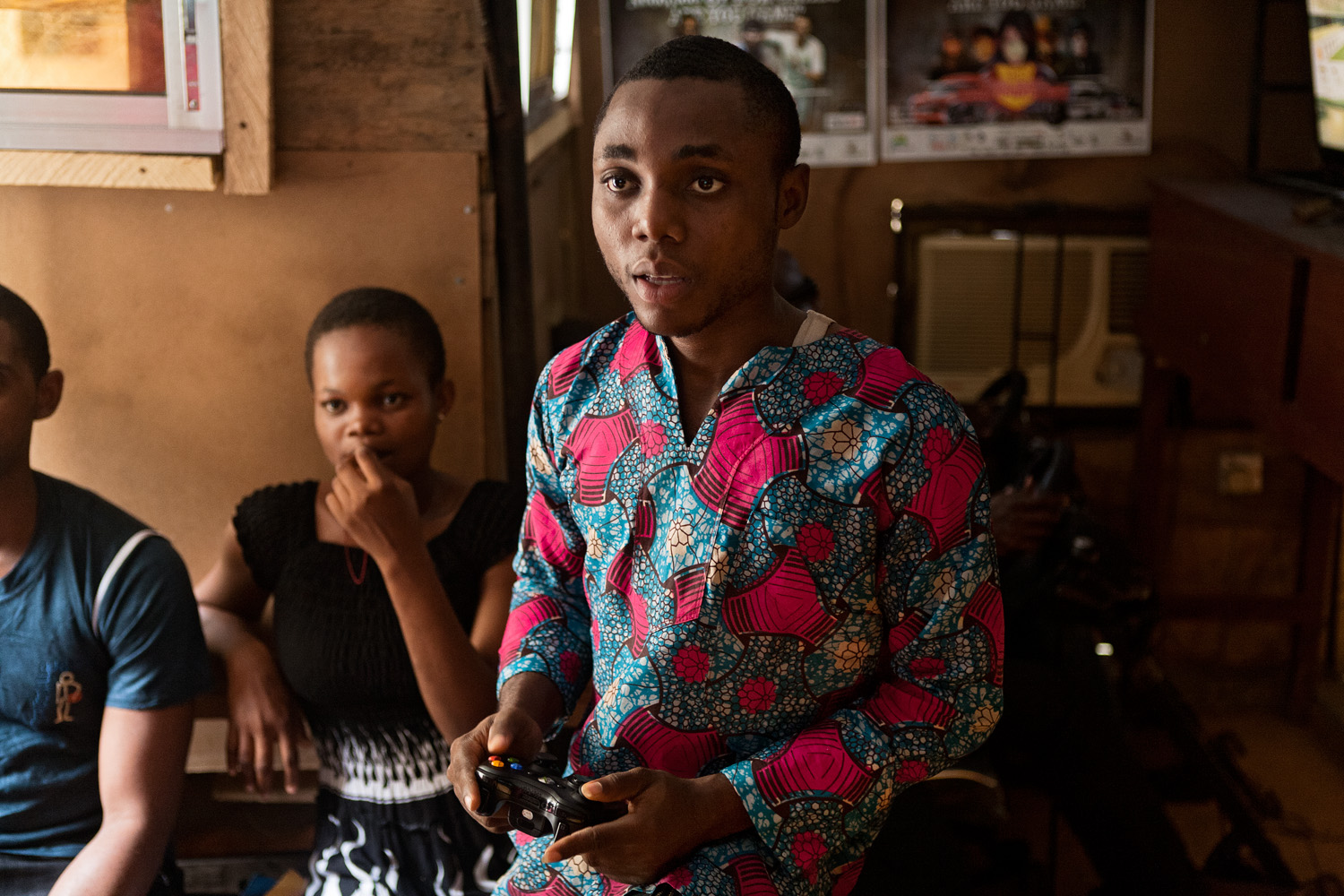 A Lagos gamer competes against a friend in Naruto Shippuden: Ultimate Ninja Storm 3 in Knightz Gaming Center in Festac.

A franchise of Phoenix, AZ-based Game Truck, operating in Lagos since 2010, was used as a venue during a Major Gaming League event held in Festac. 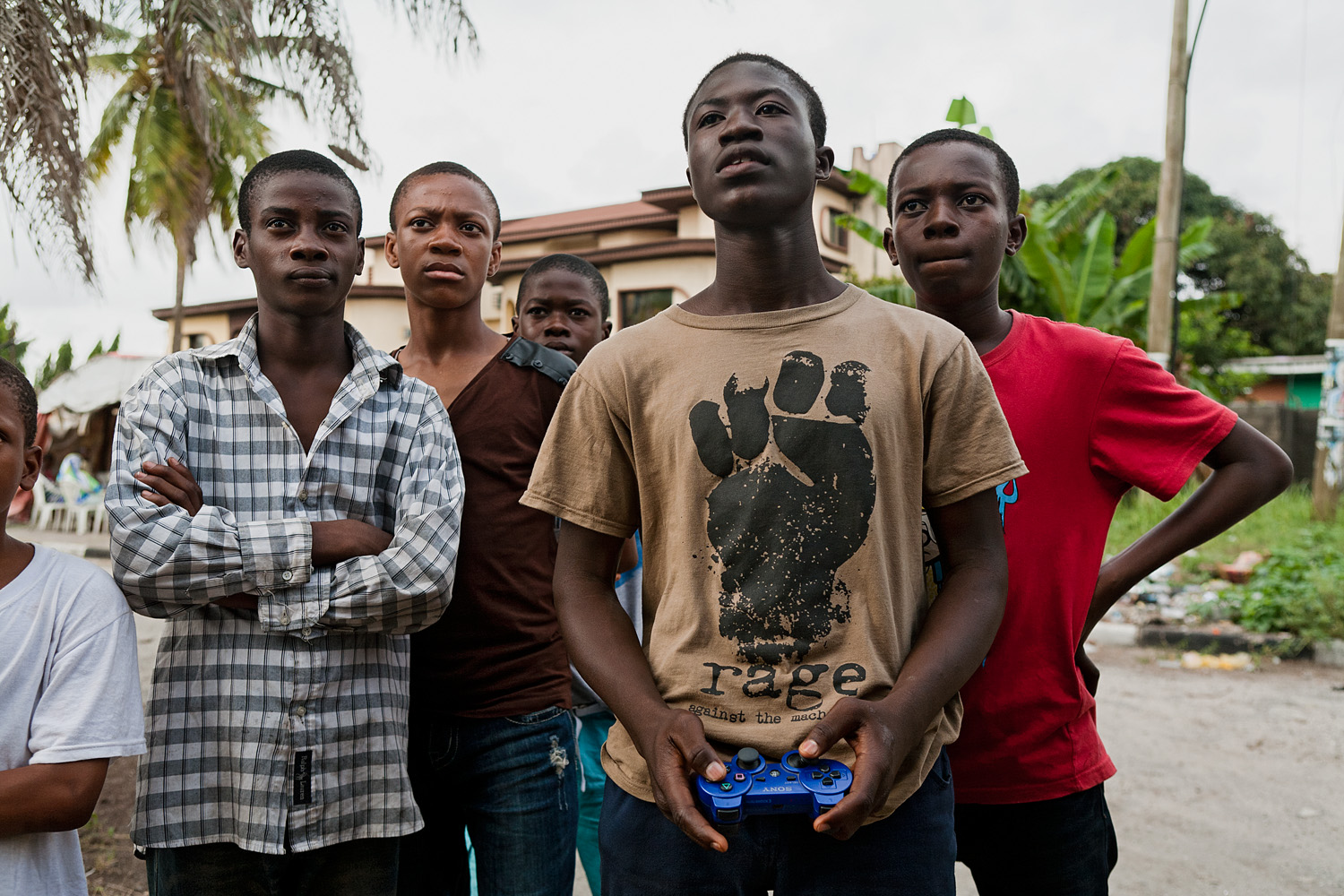 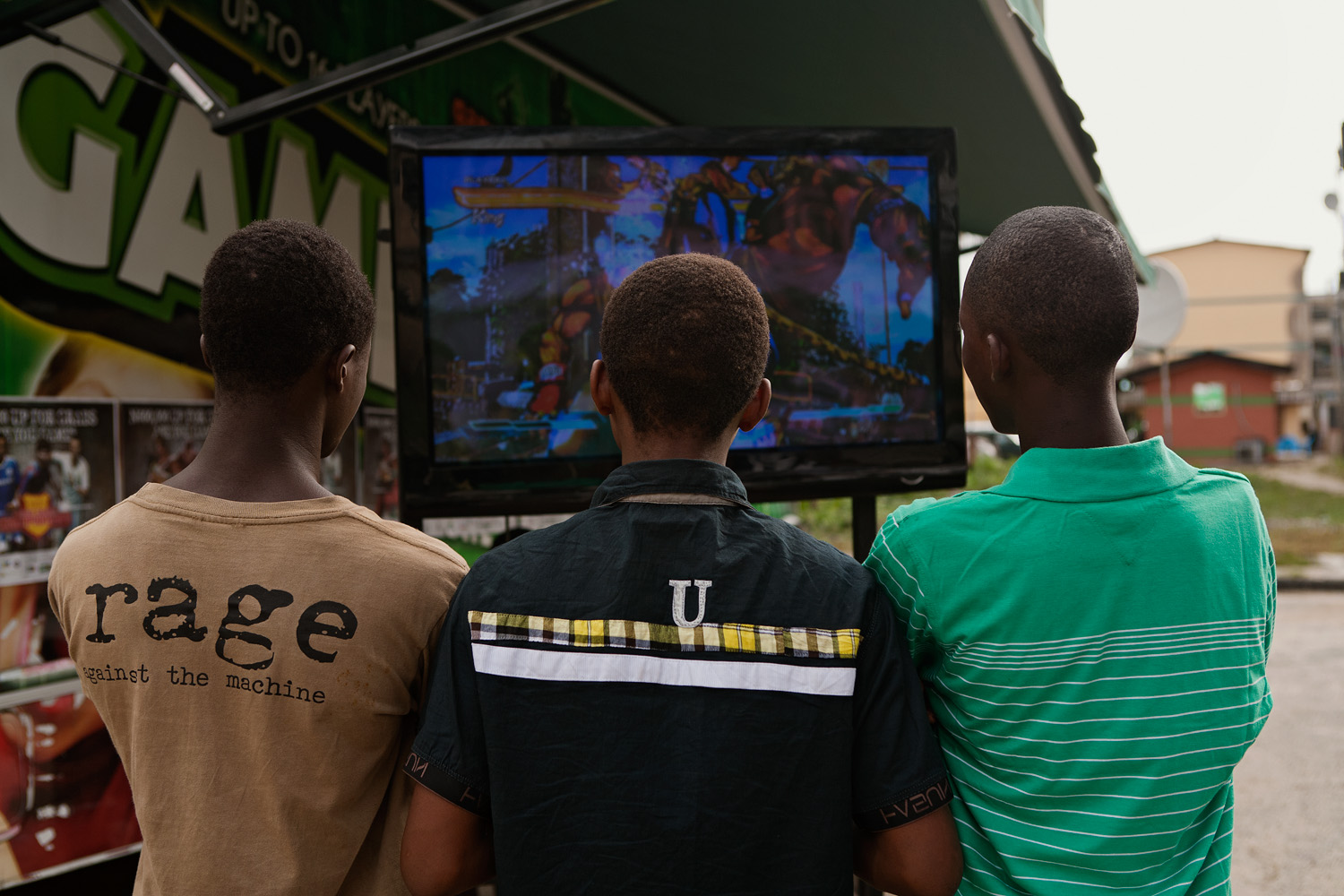 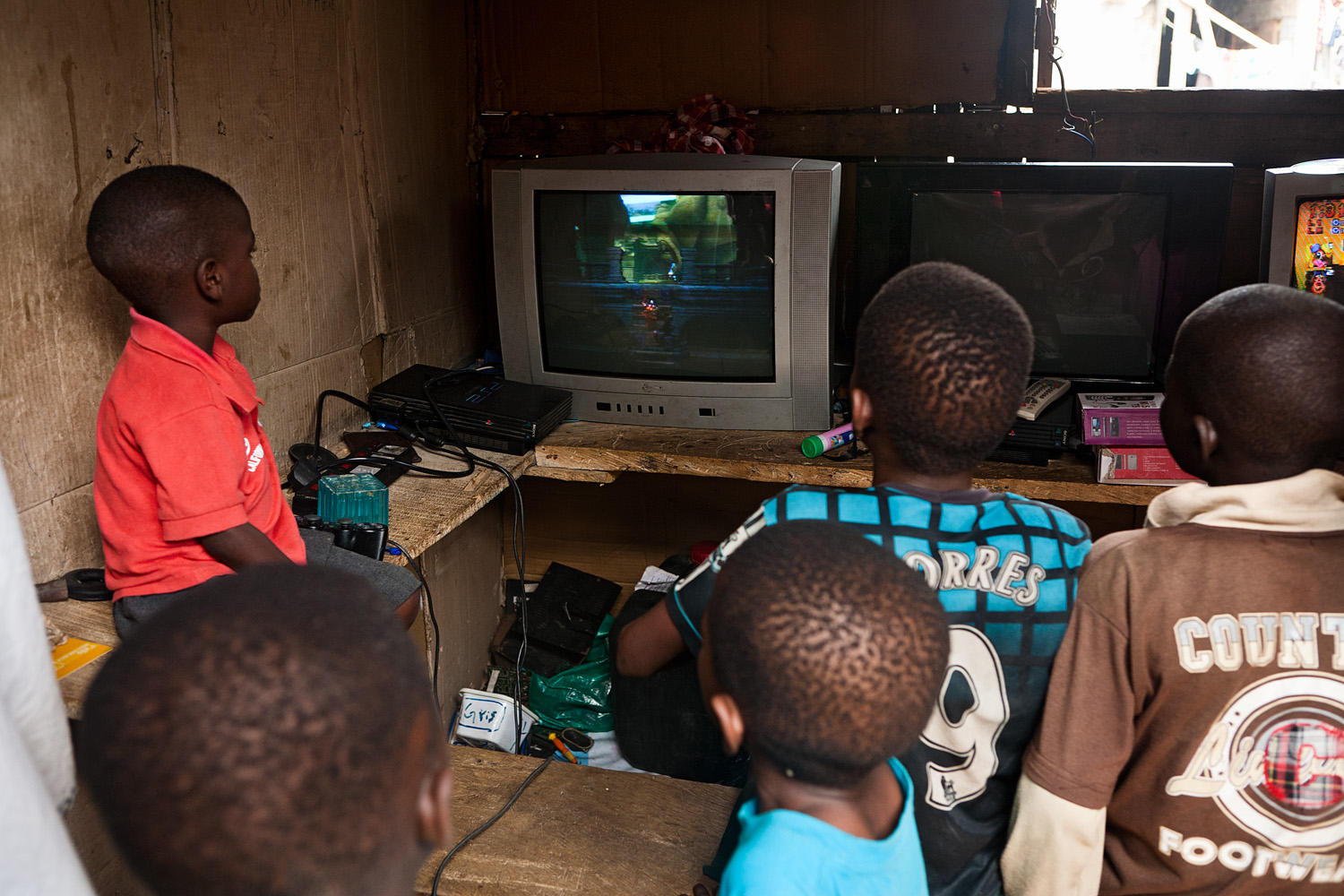 Children play God of War on a PlayStation 2 in a small gaming center in Badia East, a Lagos slum. 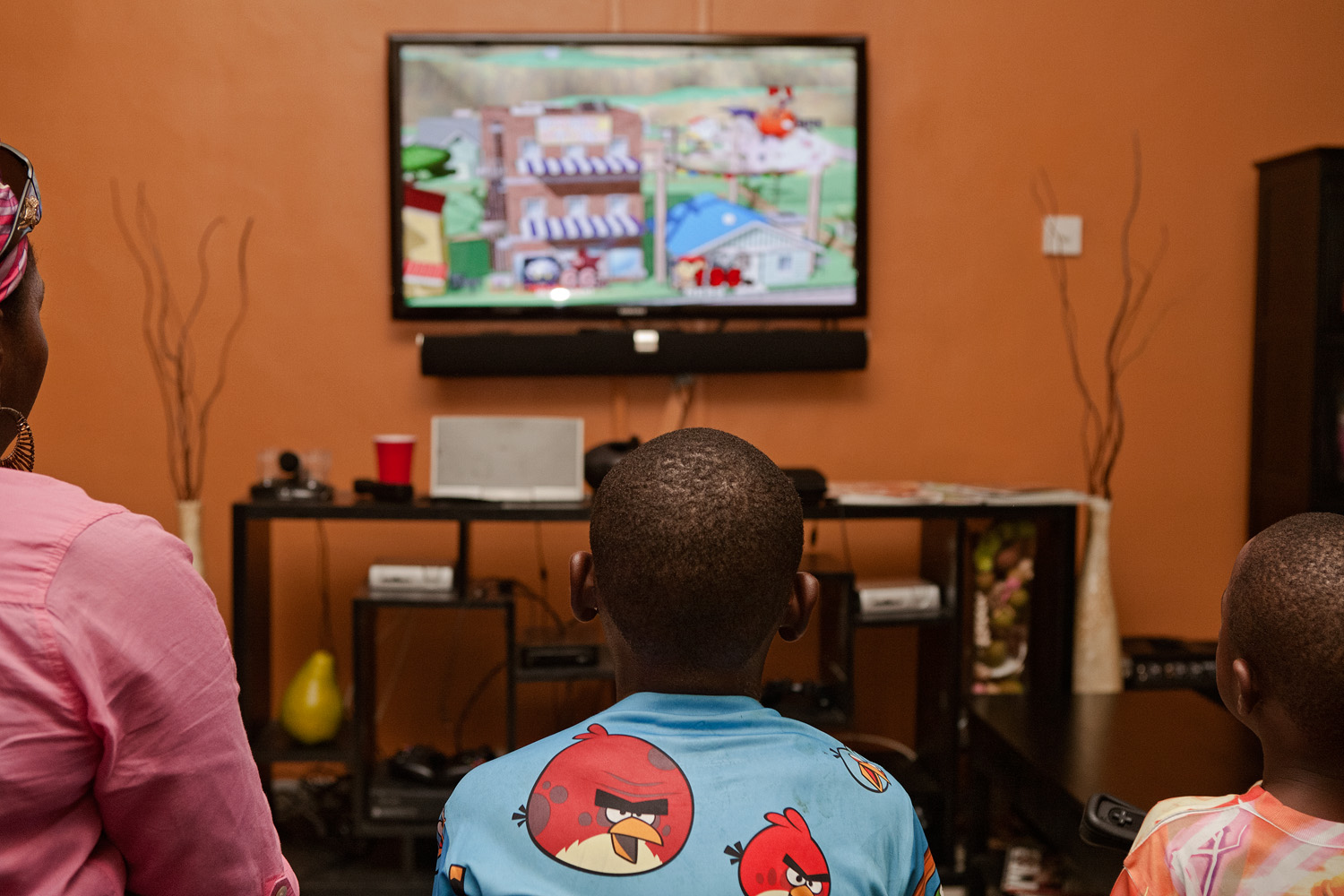 At Game Shack (run by owners of Game Truck) in the upper-class area Lekki Phase One, Lagos, brothers play Super Smash Bros. Brawl against each other as their mom watches. 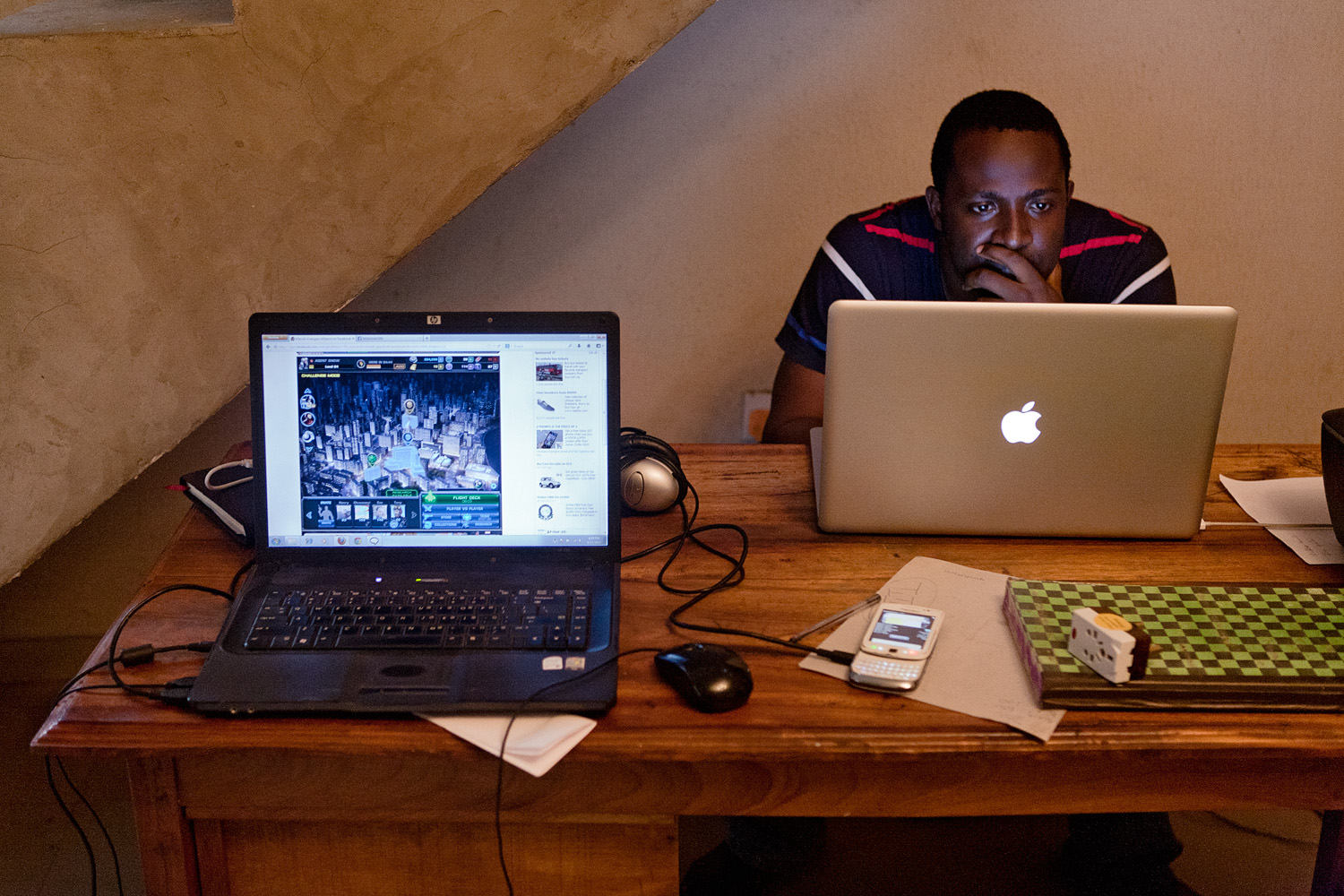 Ede, an animator working at the offices of animation and game development company, Sporedust, in Northern Lagos, Nigeria. 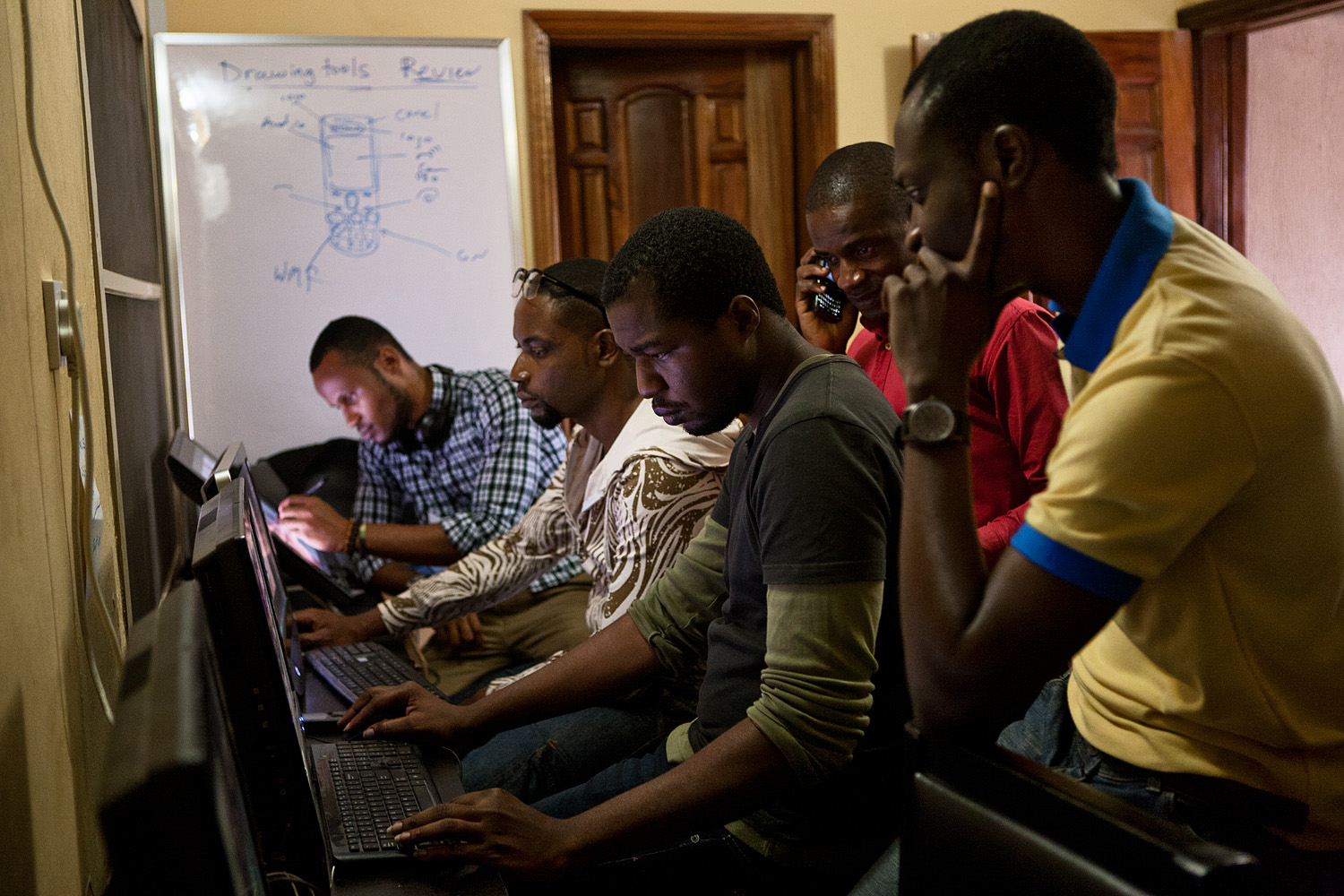 Sporedust programmers and illustrators review and share opinions about the progress of a rendered cell phone model. 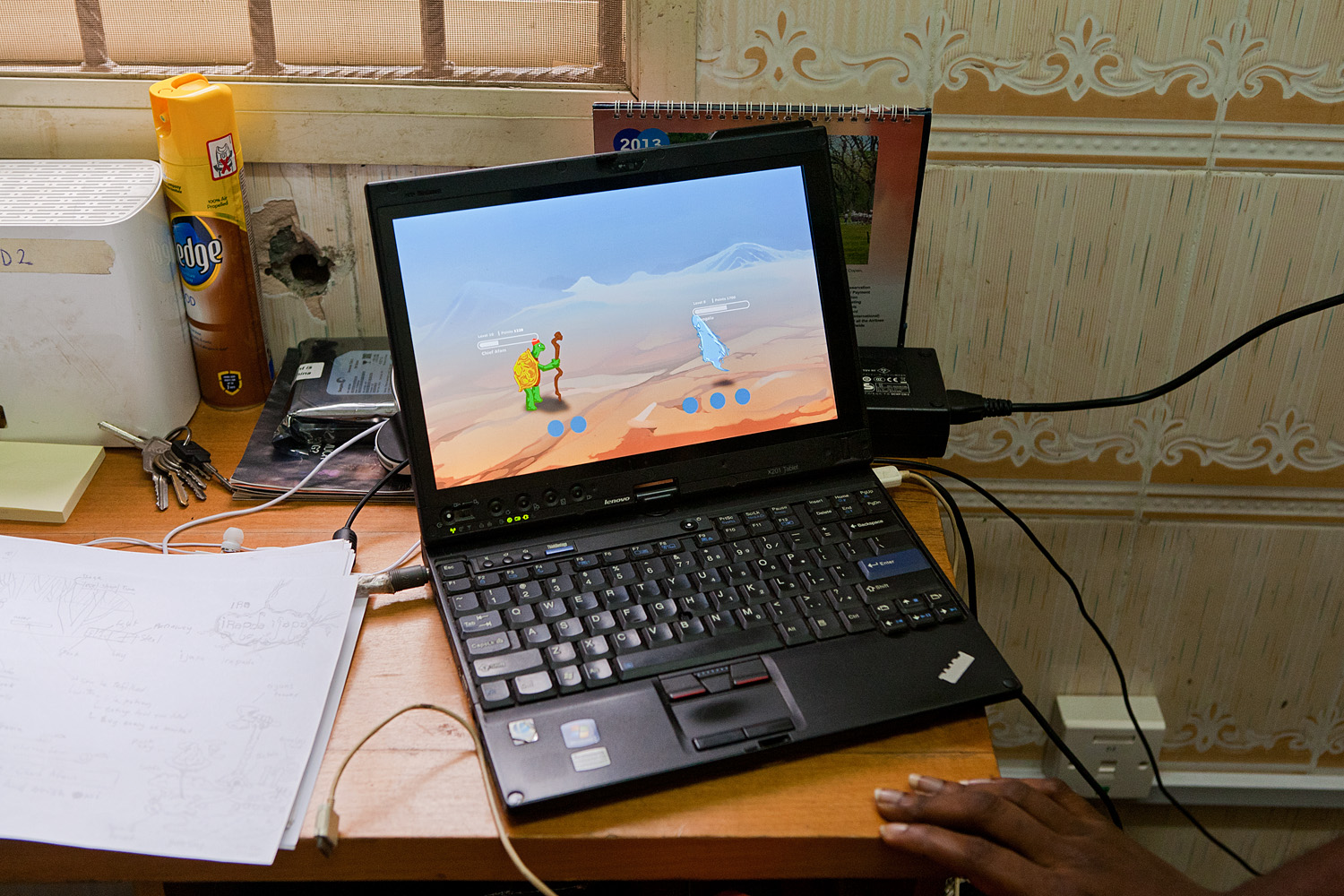 Sporedust programmer and animator Segun Kolade shows his personal game project in his office. A member of the Yoruba tribe, Kolade is centering his game's story around a Yoruba legend. 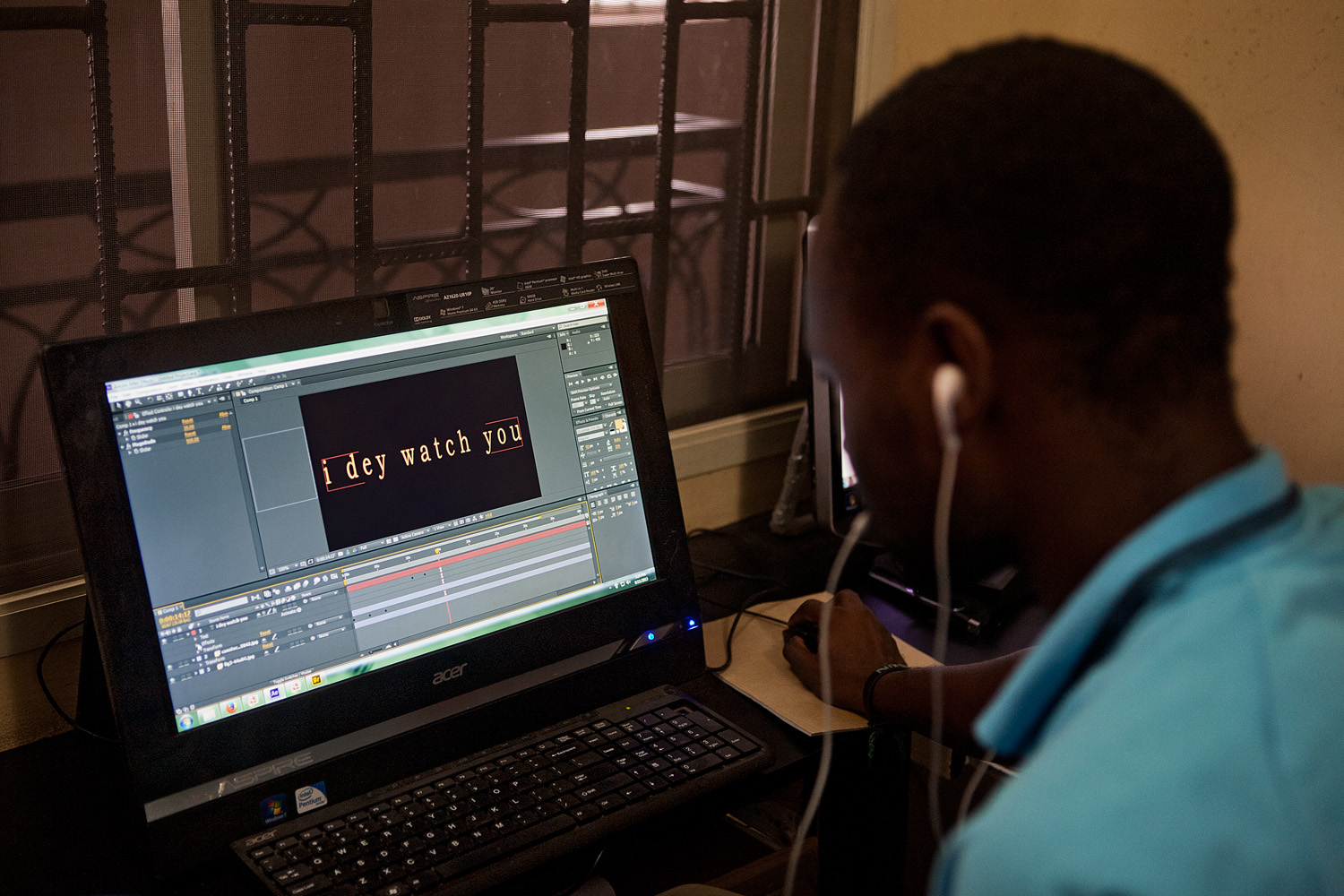 A Sporedust worker edits text into a video. "I dey watch you" is Nigerian pidgin for "I am watching you." 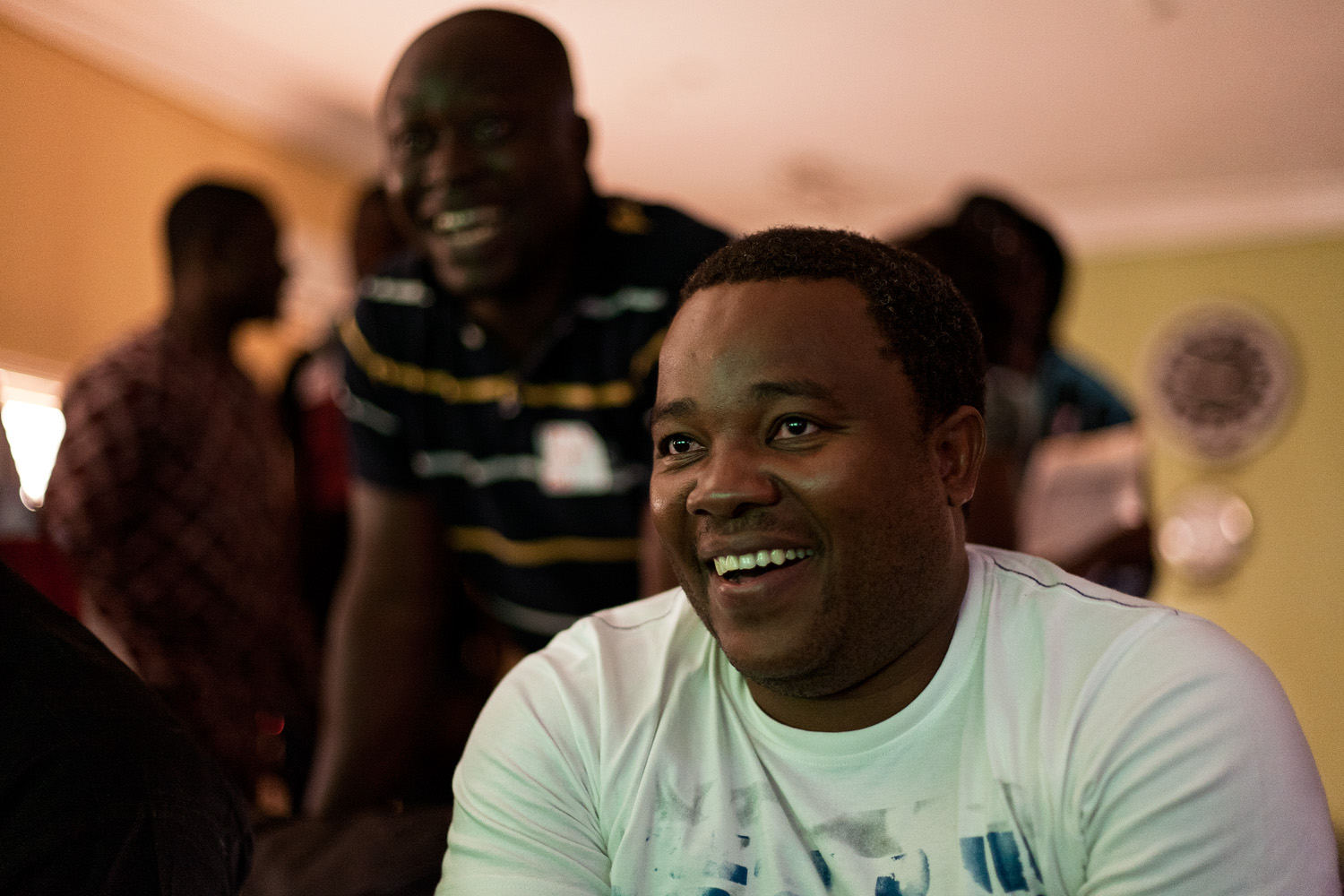 A Lagos gamer competes in a FIFA tournament at Game Shack in Lekki Phase One, Lagos. 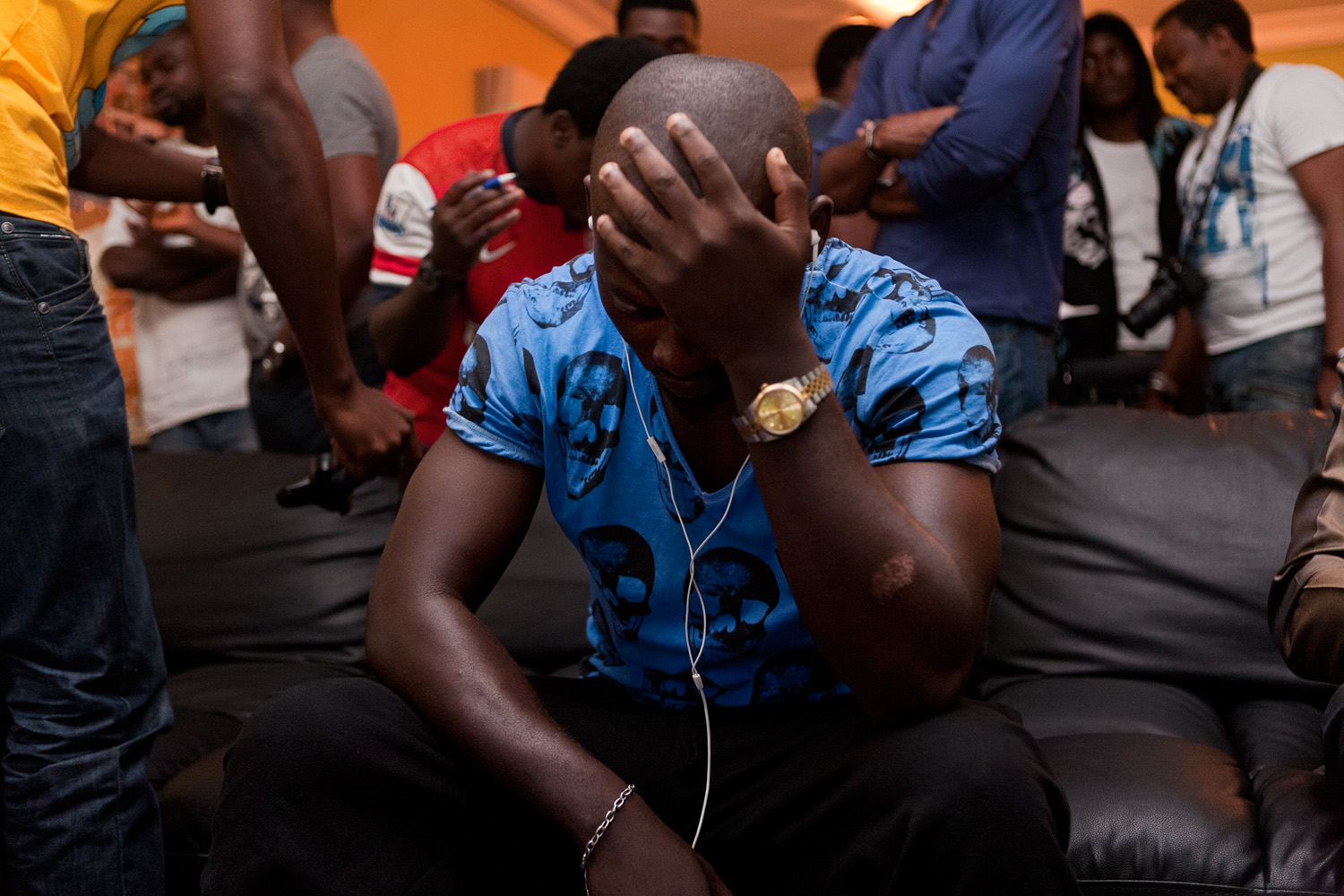 A Lagos gamer after being kicked out of a FIFA tournament held at Game Shack in Lekki Phase One, Lagos. 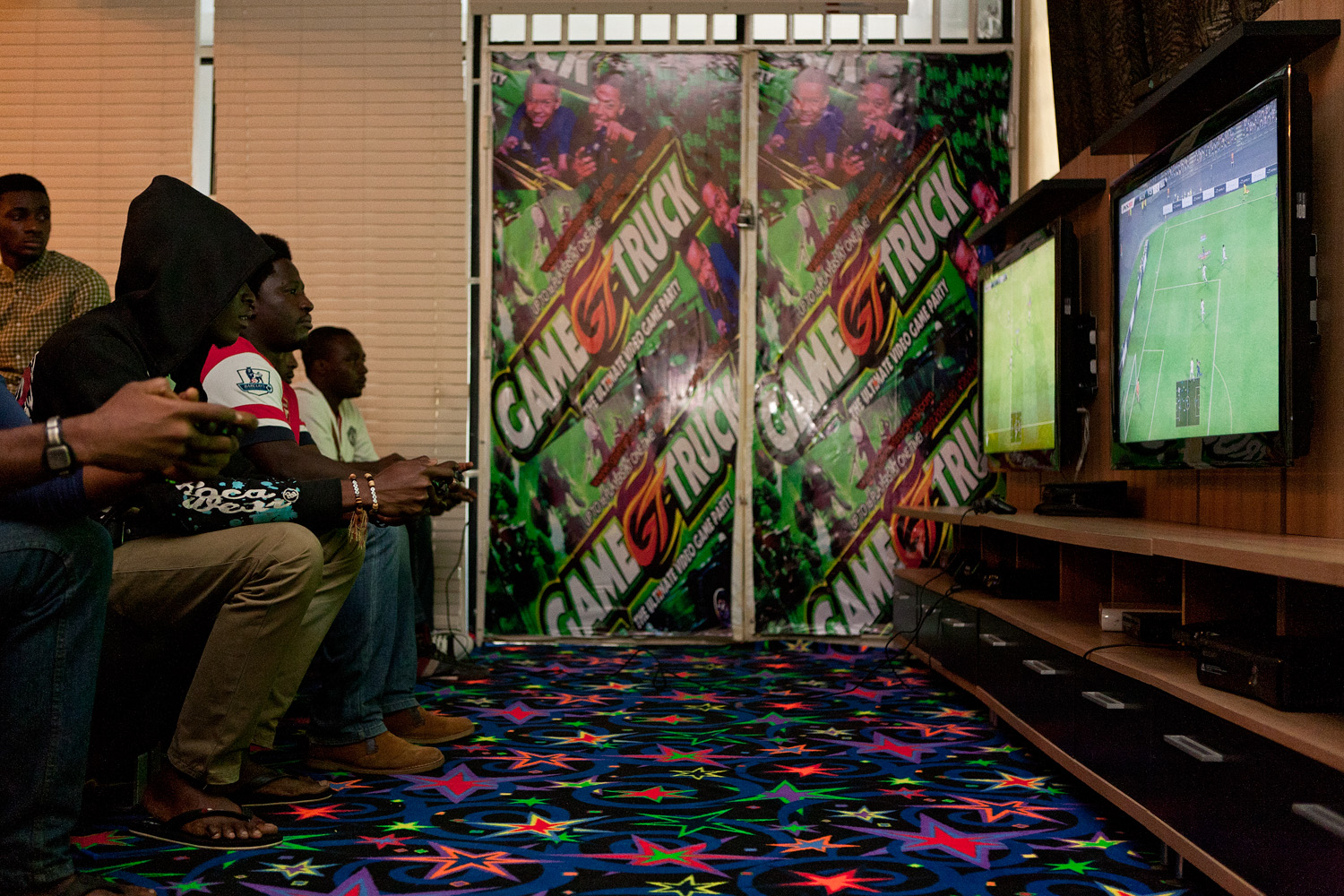 Four games of one-on-one FIFA play out at the same time during a tournament at Game Shack in Lekki Phase One, Lagos. 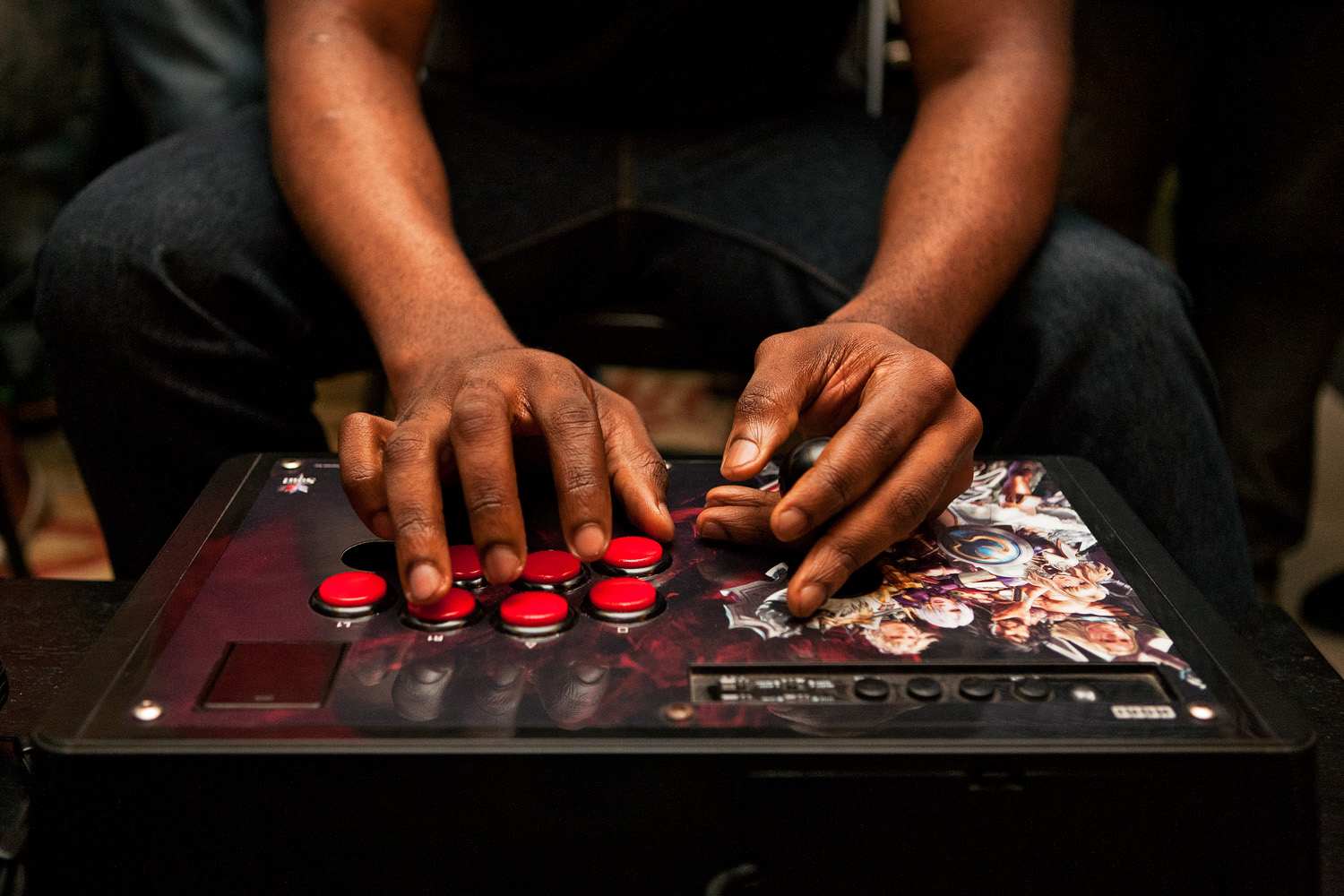 A Lagos gamer plays Street Fighter X Tekken on his arcade joystick pad during the final phase of a tournament being held at Game Shack in Lekki Phase One. 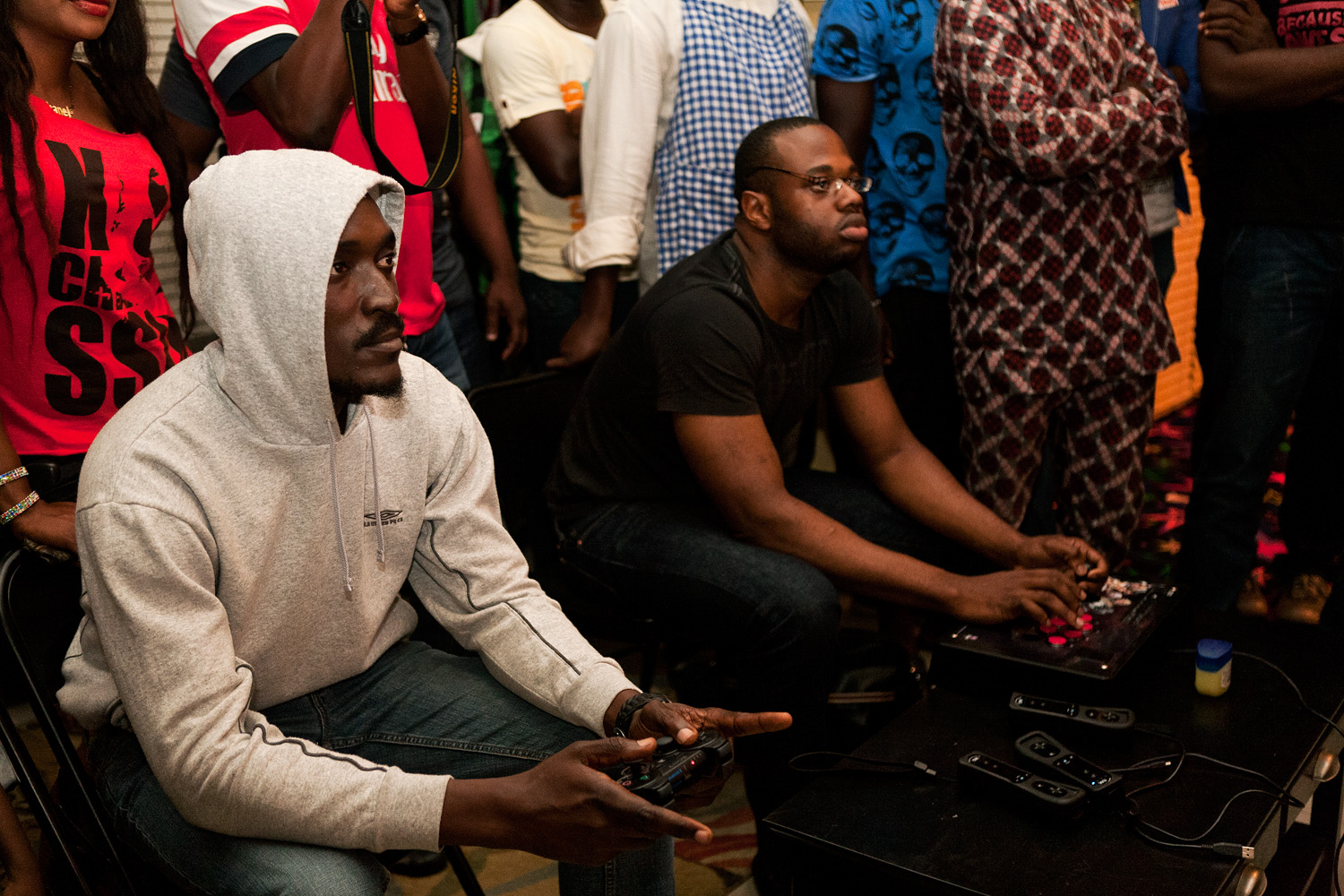 Two gamers compete in the bracket of a Street Fighter X Tekken tournament held at Game Shack in Lekki Phase One. 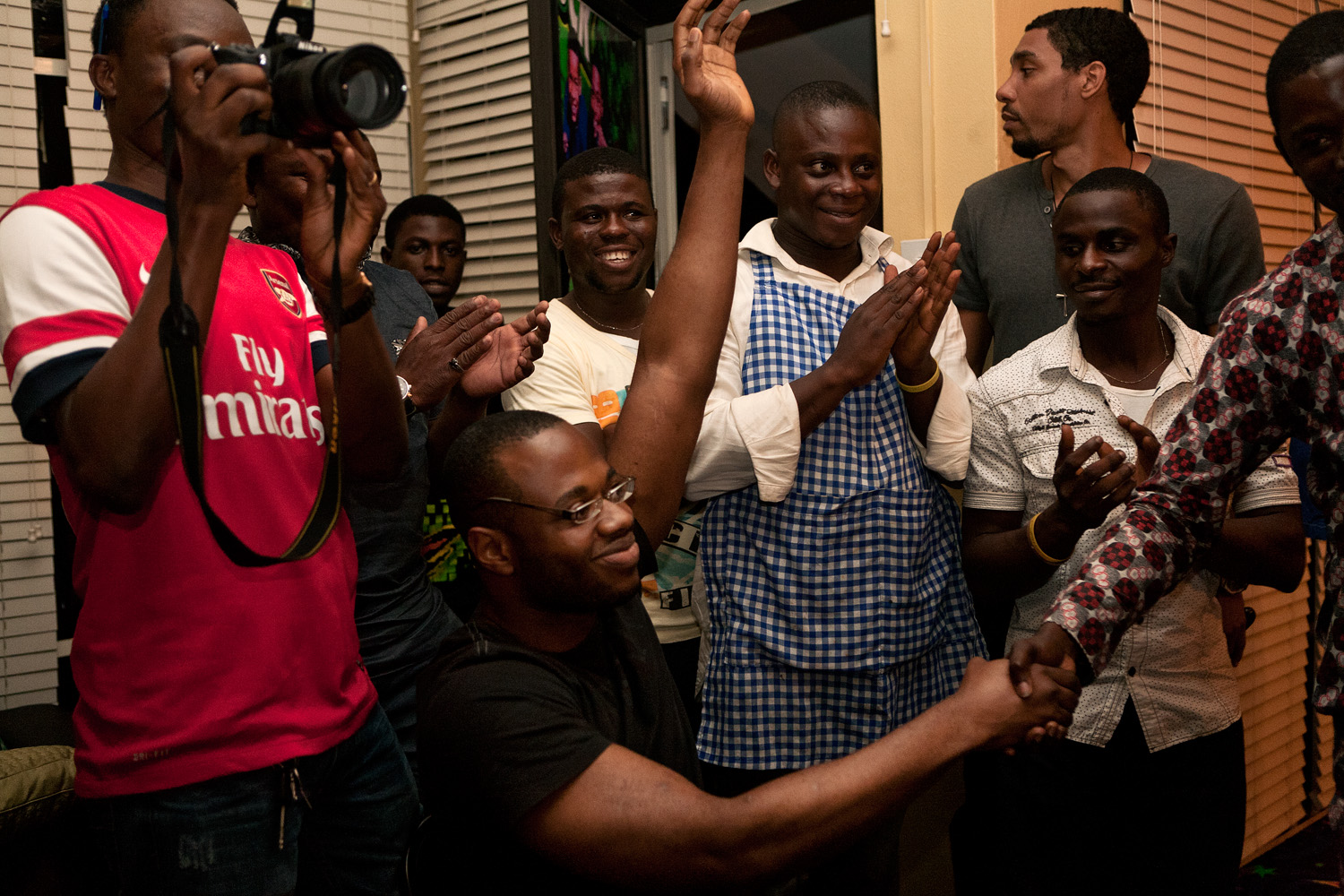