Looking back: The unlikely family behind Octodad

Share All sharing options for: Looking back: The unlikely family behind Octodad

In a tiny apartment on Chicago’s North Side, a group of eight young men sits on the edge of its seats. It's mere months away from releasing a college project into the wild as a commercial game. Few people have played Octodad: Dadliest Catch, but everyone seems to love it. For three years developer Young Horses has been bearing its squishy passenger through good times and bad.

Every member of the team tells the same few stories. The first is the story of the creation of the loving father, the caring husband, the secret octopus that is Octodad. Soon after the creation of the [team] in late 2010 [their instructors put them] into a war room and would not let them out until they had emptied themselves of ideas. Then they threw those ideas away and did it again. And again. On the third round, students were let in on the secret: Now that they had been creatively exhausted, they were mentally free to create the "New New.”

And it was out of that pressure cooker that Octodad popped. A white-collar worker, husband, father of two, who is in fact a cephalopod. ... It is as close to slapstick as you'll find in a PC game. And it is wholly unique.

Kevin Zuhn and Chris Stallman speak, like all the other members of the team, of that initial brainstorming process as the one that firmly cast the group. They want to do it again, to create the New New once more. And the only way to get there is to succeed as a company.

Excerpt from "Eight arms to hold you: The unlikely family behind Octodad." 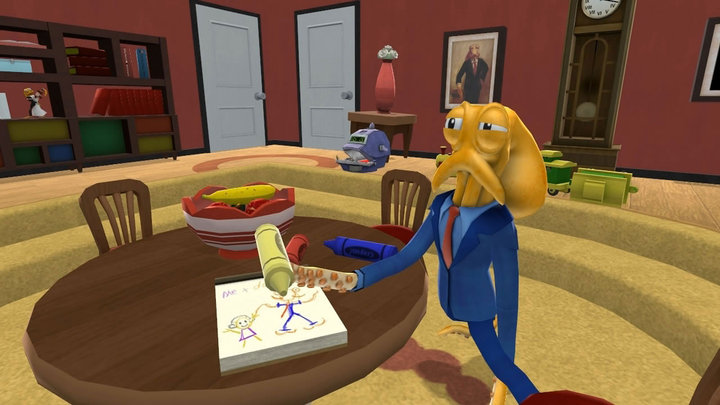 Earlier this year we published "Eight arms to hold you: The unlikely story of Octodad." Features writer Charlie Hall spent time with the team in its natural habitat, learning about its personal struggles with its art, and with being taken seriously enough to be allowed to do it all again some day.

"I couldn't tell my dad that I was making games," says Majdi Badri. "He would have been, 'That's impossible!' My dad comes from the school of thought that there are three things to be when you grow up, and that is doctor, lawyer and engineer. And if you're not one of those three things, you won't be happy and life will be terrible for you and you will make no money.

"So, for the first three or so years, he would be like, 'What are you doing in school?' And I'd say, 'Computer stuff.' ... And then [the original] Octodad came out and it got this huge hype and cult following and people really dug it. And I would show my dad ... all the things that people were writing about us. And he'd be like, 'Well, maybe this is something good.' And now he's totally supportive of game design."

When Sony’s E3 press conference came in June no one expected Young Horses to take the stage and have Octodad: Dadliest Catch introduced as a PlayStation 4 exclusive title. Senior Reporter Mike McWherter played the game on the show floor and walked away impressed:

Octodad: Dadliest Catch's unique and unfamiliar controls feel strangely important. They level the playing field for many players, since no one's really manipulated a character like this before. That means Octodad has the potential to be enjoyed by everyone, regardless of skill

Read the full story: Eight arms to hold you: The unlikely family behind Octodad