Travis Baldree and Erich Schaefer know what it takes to bring successful games to market. You might say that they’ve become pretty good at it.

Schaefer co-founded Blizzard North where he was a pivotal part of creating the Diablo series. Later, he co-founded Flagship Studios in order to make Hellgate: London. Baldree created Fate and, when he went to Flagship, had a hand in building Mythos. Later the pair teamed up to found Runic Games, where they gave birth to the successful Torchlight series.

But after those successes, Baldree and Schaefer say they also know what it’s like to be in a rut. They’ve each spent a long time making games — specifically action role-playing games. Cumulatively, they’ve been at it for close to 30 years.

Pile on all the responsibilities of running a company, of being responsible for hundreds of people, and they say that after a while it all became too much of a grind. They needed to make a change, and the only way they found they could do so was by hitting the eject button.

In March they left Runic, launched themselves into the black of space and never looked back.

Their new company is called Double Damage Games, and the result of their work — now ready to show to the public for the first time — is called Rebel Galaxy.

From the opening twangs of the trailer’s soundtrack you get the feeling that this space game will be exploring a different, grittier track in a genre that's seeing a surge in popularity. This is not a glossy, modern affair like Star Citizen or Elite: Dangerous. It’s not the futuristic void of No Man’s Sky, and it’s certainly not an up-close dogfighter like Eve: Valkyrie or Enemy Starfighter.

Rebel Galaxy is all about big, hulking capital ships. These are vessels that have been around the galaxy a time or two, seen a few scraps and held out long enough to keep their crews alive. Take the gritty, lived-in ambiance of the television series Firefly and liberally sprinkle in the large scale, multi-ship engagements from Return of the Jedi or Battlestar Galactica and you begin to get the idea.

Every battle in Rebel Galaxy has the potential to be a taut, setpiece event. And yet, Baldree and Schaefer told Polygon, their goal was to give Rebel Galaxy a warmth and an intimacy that will pull at players' heartstrings. The men at Double Damage want players, in their roles as captains, to be free to roam across randomly generated galaxies, each filled with dozens of solar systems to explore and colorful factions to meet. They want players to develop relationships along the way, and to carve out a role in that galaxy that’s all their own.

"It’s the most fun I’ve had doing anything in a long, long time."

But instead of hiring on countless hands to help them, Baldree and Schaefer wanted to do it alone — with help from contractors on things like art and music — in an indie title made on a shoestring budget.

To accomplish that they’ve had to go outside their comfort zone. They say it’s been liberating.

"It’s a breath of fresh air," Schaefer said. "It’s just so much fun to work on something so different."

Baldree agrees. "It’s the most fun I’ve had doing anything in a long, long time."

At first glance it’s hard to get your head around the scale of Rebel Galaxy. Schaefer and Baldree assured me that these aren’t little ships. The smallest are manned by hundreds, while the largest have crews that number in the thousands. The dreadnought class shown in the trailer is referred to as a "city of destruction." To help with maneuvering in the third person perspective each one takes up quite a bit of real estate at the bottom of the screen.

The controls are simple. Players use one stick to urge the gigantic beasts to turn left and right. The other stick controls the guns, of which there are two main types — broadsides and turrets.

Broadside guns fire as they would be from a classical pirate ship, out the long sides of the craft. They have predictable firing arcs linked more or less to the orientation of the ship itself, shown as a ghostly overlay trailing out and away from the player. Pull the trigger to launch a volley and if the enemy ships are in the way they get blasted.

Bigger ships have more ports in which to place broadside weapons; the smaller frigates have four while the dreadnaught has 16. These weapons will do the majority of the damage to your foes, wearing away at them over time with any number of different energy or projectile-based weapons.

On the front and the back of each ship are places to mount more mobile weapons. Just like the turret on a tank, they have the ability to traverse independent of the orientation of the ship itself. And again, the larger the ship the more turret mounts it will have.

While the broadsides are powerful, they’re not terribly accurate. Baldree and Schaefer say that turrets will give players the most precise control over what they hit.

"I can choose whether I want my forward flak cannons to target inbound enemy torpedoes," Baldree said. "Or maybe I only want them to target incoming fighters. Perhaps I want my plasma cannons to only attack turrets on other ships. You kind of arrange the loadout on your ship for specific kinds of purposes, or for the way that you want to play."

Each bank of turrets can be given standing orders, or players can take control of the turrets and fire them manually.

"You can just move the reticle around on the screen," Baldree said. "It can auto-snap to targets as they pass. But you can also directly fire the turret. It’s like iron sights; you hold the left trigger and the camera swoops down to the actual turret level and it’s like being in the Millennium Falcon shooting one of the turrets."

Because of the way equipment is randomly generated in the game, broadsides and turrets will let each player tune their ship to meet their individual play style. But there will be other systems to customize as well.

Software banks will be places to upgrade fire control systems, enhance heat management and weapons recharge rates. Shield systems will also be upgradeable, as will engines. There’s also something the team calls a "deflector," a kind of protective cone you can throw up around yourself.

"The deflector is a 'whole-ship' shield which can be engaged at any time," Baldree said. "While engaged you can't fire any weapons or turrets or countermeasures. It fully absorbs most damage, but all damage absorbed subtracts from the available deflector energy."

Deflectors will be a last ditch way to protect yourself and your crew, to prepare for one good salvo before the enemy brings you down or to buy yourself enough time to dive headlong into an asteroid field to keep them off your tail.

Or maybe, while that protective shield is up, you’ll take the opportunity to hail the opposing captain and make them an offer they can’t refuse.

Diplomacy by other means

Baldree and Schaefer insist that what makes Rebel Galaxy different from the games they’ve made in the past is the way the story will unfold, and how players will have the opportunity to create and play a role.

"The funny thing is," Baldree said, "we did all these action role-playing games in the past, but Rebel Galaxy is more of a role-playing game than any of them were. You can have conversations with people and the things you say have consequences that matter.

"In Diablo, unfortunately, your 'role' was really just to beat things up. And there were not a lot of story branches, or changes in the way that anybody reacted to you."

The universe of Rebel Galaxy will be populated by a number of different factions. Military units will protect their systems and will fight against any piracy going on around them, and it appears there will be plenty. Multiple factions within the pirate ranks themselves will battle against each other for primacy.

Players will be able to speak to individual units while in the battlespace, but they’ll also come in contact at interstellar watering holes — cantinas, taverns and the like. The real joy of discovery, the team hopes, will come in meeting and interacting with the game’s alien races either by entering their systems or buying them a drink.

"When we were outsourcing character art," Baldree said, "Jim Henson puppets came up a lot. We asked artists to think about The Dark Crystal, to talk about how these characters were made.

"And that’s also a throwback to Star Control 2, which had that kind of character to it. That’s one of the things that I always liked about that game. It wasn’t cold. There was a lot of warmth to it, and we wanted a lot of that."

The pair is tight-lipped about exactly how many factions will be in the game, even about their personalities and goals. So much is in flux right now, they say. But the faction system will be a way to advance in the game world, and also in the tech tree. In fact, they hope that certain technologies, and even certain capital ships, will be accessible only to players who have a high enough standing with a given faction. 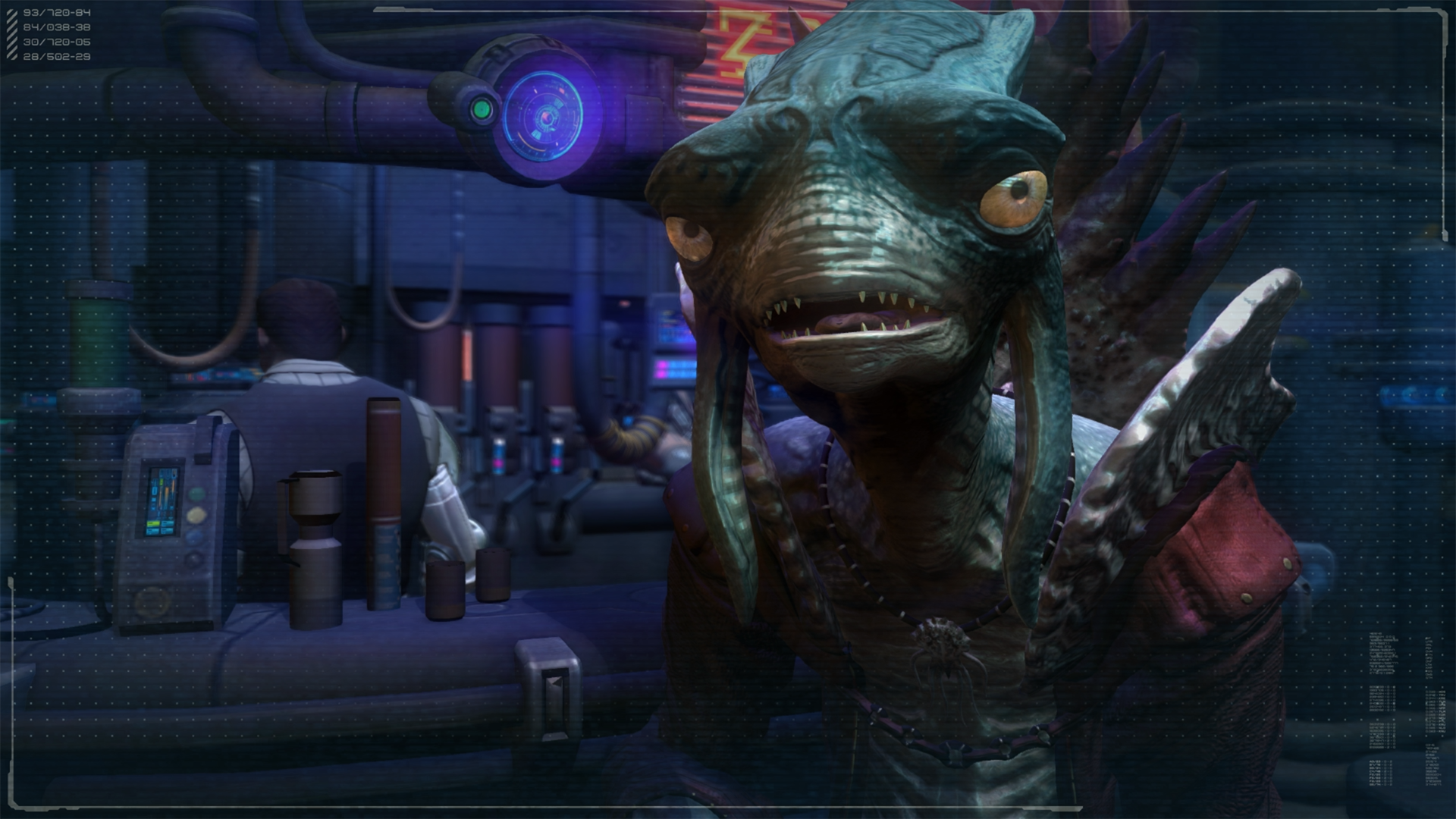 Double Damage looked to The Dark Crystal for inspiration for their aliens. 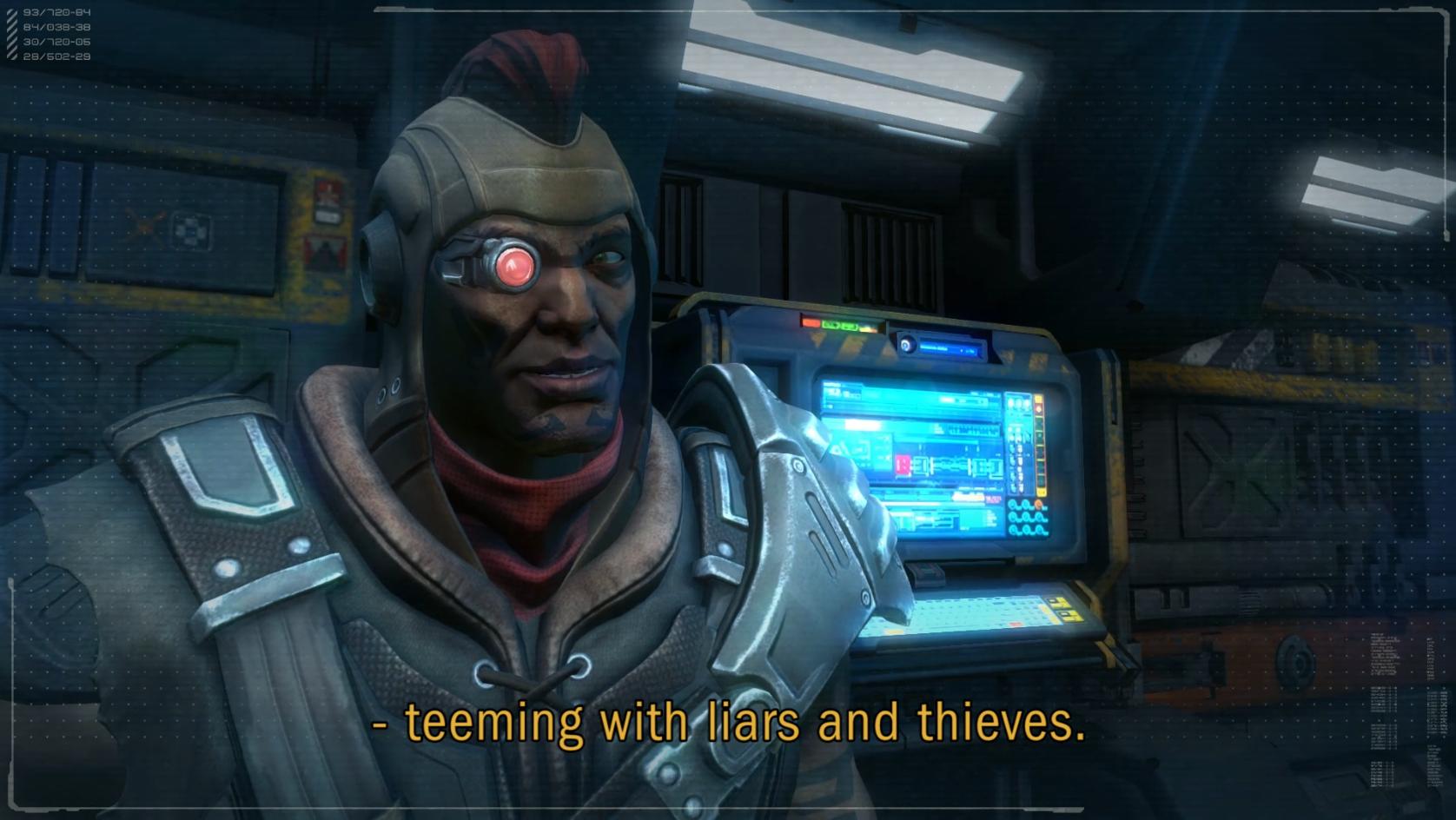 Rebel Galaxy is a departure for Baldree and Schaefer, but it has many of the hallmarks of their action RPG roots. The random galaxy and loot generation, for instance, is something they carried over from previous titles.

"It has components from the games we’ve made in the past," Baldree said. "We really like random generation, for instance, because it means that we can play the games that we’re making and we don’t exactly know where everything is or even what everything is going to do."

Also like their previous games, this one will have an end. There will be a final showdown, a climactic battle of some sort. But after that, they hope that players will be able to continue on in the universe they’ve created in an endless sandbox mode.

Many options are still on the table, but what the team at Double Damage hopes to maintain as they finish development is the sense of freedom to the quests that they create.

"The example that I like to give," Baldree said, "is you go to a bar and you get a tip that there’s a famine on a planet and that a series of ships is being sent with relief. At that point you can choose to go and get to the planet ahead of time and maybe sell some foodstuffs while the price is still really high. Or you could choose to go blow up the relief ships, take all the food, and then go sell it at an even more inflated price. Or you could go and protect the relief ships from pirates on the way.

"All of those options are in keeping with different kinds of roles, and conversation options that you have are tied into that."

It’s the kind of freedom that they themselves say they’ve enjoyed professionally since going out on their own. There’s no set of Kickstarter backers to entertain, no publishers to appease. Most importantly, there’s no other creative minds to haggle over the gameplay with. Just them and a whole galaxy of play to create.

Double Damage expects to have Rebel Galaxy out sometime in 2015 for PC and PS4.