Share
Tweet
Maker of 'Diablo meets Hearthstone' game is out of cash, but clings to its principles.

Things could have gone a lot worse, the day Steffan Kabbelgaard gathered all his employees together to inform them he had no money to pay their wages.

Copenhagen-based BetaDwarf employs 18 people. The team had an inkling something was afoot, when their normally effervescent leader emerged with a long face, to hold their daily morning scrum. Kabbelgaard told them he needed to share some bad news about the company's financial situation. He said he wanted to try and find a way forward.

The cash situation didn't take long to explain. BetaDwarf was out of money. The coffers were empty. Their game — Forced: Eternal Arenas — was months away from completion.

The solution took a little while longer to work through. Indeed, after the morning meeting broke up it was generally agreed that the rest of the day ought to be spent in one-on-one confabs, just to explain all the details and its ramifications

He asked the team to work, without taking home a salary.

His proposal, so far as employer-employee relations goes, was extremely unusual. He asked that everyone stay and finish the game, without taking home a salary.

After a long day of meetings, the team came together to talk about what had been decided.

Every last person agreed. They were going to stay and get the job done. 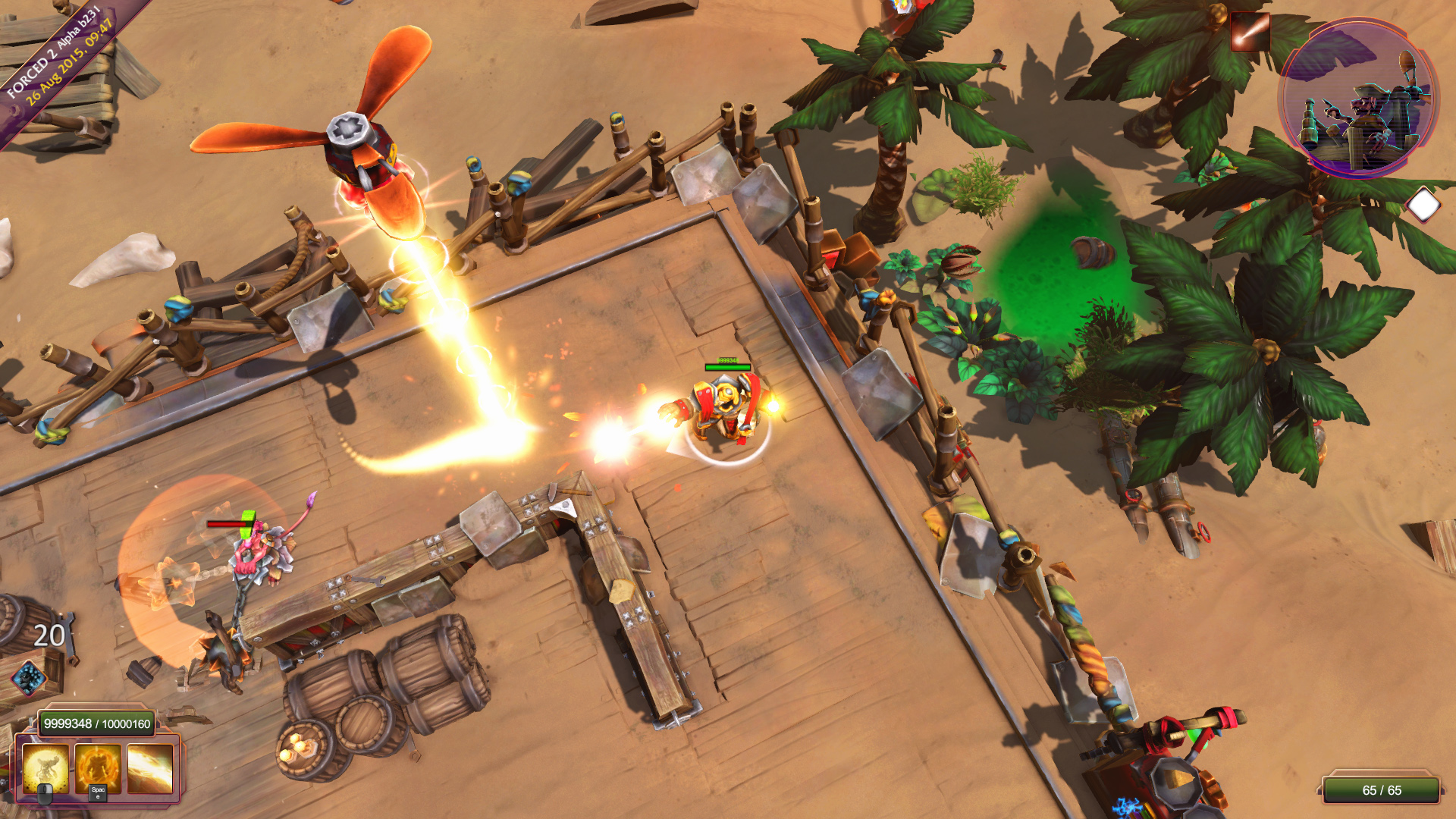 "Of course it was sad," says Kabbelgaard, speaking about the meeting. "But now we’re in a situation where there might be hope. We're also motivated. Now we know we have a fighting chance."

BetaDwarf is an unusual company, in that all employees are guaranteed a share of revenues from everything they make and sell.

They all took home the exact same minimum wage.

Half the company's income is earmarked to be shared among employees. About a third goes on company growth. The remaining 15 percent goes to Kabbelgaard and his programmer business partner.

Everyone at that meeting understood that if they finished the game, and if it became a hit, they could make enough money back to cover their salary losses, perhaps even a little bit more.

The hardship of a few months on zero salary was something that could be endured as a shared experience, because everyone at BetaDwarf (including owners and managers) were already on low wages. They were all paid the exact same minimum wage salary.

The company's bank details and financial transactions are always available to employees to scrutinize. A recent Kickstarter has been launched to raise enough money to pay rent, keep the company afloat and help out any employees who are really struggling financially.

So all employees are already invested in their work and in their mutual success. They are each sacrificing a potentially higher wage in order to work within a system they believe in, on a game they care about.

Frederik Denning joined the company as a producer in March this year. He took a pay cut from a job in academia to work on Forced: Eternal Arenas. "I saw BetaDwarf's way as an upside," he explains. "To me, it underlined the ideals and nerve of the company. You don’t have that traditional game development structure of a programmer is worth X and a designer is worth Y," he adds. "We all have the same base starting line."

It's worth noting that BetaDwarf honors revenue shares for 12 months after an employee quits. Team members could walk now, and still take a share of income from the game, which is due out around March, 2016.

However, the spoils are split according to peer appraisals. It's unlikely that someone who walks can expect a higher appraisal score than someone who stays.

They were evicted by a surprised university lecturer.

"If you're a valuable asset, you get a bit more," says Denning. "If you're not providing a lot you'll get a bit less. When writing appraisals, people are surprisingly good at setting a line between friendship and work environment," "Who writes what is anonymous, but you can read the evaluation of any person on the team. Of course, there can be stuff like, 'you’ve been very pleasant to work with lately because you’ve been in a good mood', but people are generally evaluated based on the work they’ve done and the direct influence they’ve had on the company and on the game."

There's a commune mentality at BetaDwarf that goes way back to its formation, when the company was based in a university classroom that the faculty appeared to have forgotten. Everyone on the team worked and lived in that classroom. They were only evicted when a lecturer was assigned the room, and arrived to find beds, computers and developers sprawled all over her workplace.

From there, BetaDwarf moved into a rented house, which they all shared until they had finished and released Forced, a top-down action arena RPG. Forced was a minor commercial success, selling 500,000 units. It allowed Kabbelgaard and his growing team to move into proper offices, and to hire more help. They wanted to make a much bigger game

Forced: Eternal Arenas is described on its Kickstarter as "Diablo meets Hearthstone in a 3D action brawler with deck-building."

"We mention Diablo and people say it looks like Diablo, but there are big differences," says Kabbelgaard. "It’s an aim-based game. You control with WASD and your mouse. You’re moving around and aiming. The control scheme is more twitch-based. You have to dodge attacks way more, whereas in Diablo games, it’s more about health management while you’re attacking."

"You can influence each arena with your cards."

Arenas are generated randomly. Characters play as gladiators who progress by defeating enemy bosses, which can summon minions and environmental damage agents. Cards drawn from a deck are used to build characters and to launch extra offensive and defensive moves as well as stat buffs.

"The boss is able to play cards and you can counter whatever the boss throws at you," he adds. The player has the advantage of seeing what the boss is planning. If the boss plays a meteor shower that rains hell down every few seconds, the player is well advised to play shield effects so it’s easier to dodge incoming danger.

"You can influence how you tactically approach each arena with your cards. It has a nice progression, because the further you go into the battle, the more nasty cards your boss throws at you, and the better the cards you get access to as well.

"The more tournaments you win, the more cards you collect, the more new tournaments open up, and you’ll face stronger opponents." Players can also recruit battle companions, like a dinosaur or dragon, to help them clear a path.

Media reaction to the game has been positive and BetaDwarf is building up a significant fan base, not least because the original Forced is still well liked.

"I think this is going to be a success," says Kabbelgaard. "Roguelikes are extremely popular and this comes with a high level of polish. We’ve had a closed test on Steam with a couple of thousand people who’ve been giving us feedback for almost a year now. We’ve fine-tuned it toward making the cards a fun mechanic. The feedback is very positive."

To some extent, Kabbelgaard blames himself for the sticky situation the team is in right now. Following the release of Forced, he and the team worked on a plan to bring the game to console. It seemed like the right choice at the time, but turned out to be an expensive distraction.

"Every part of the Forced design was geared toward consoles," he explains. "It’s perfect for couch co-op and controllers. Consoles were ideal for it. But then, because our game was multiplayer, it added a lot of complexity. Our initial idea was to be ready almost when the consoles went to market, but it just took so much more time.

The Xbox One and PlayStation 4 versions are due out later this month. He does not anticipate a big financial return on the forthcoming releases.

"It's one of our chances to recoup something," he says. "But we’ve talked with a lot of industry people. Maybe we can expect less than 10 percent of the revenue we get from Steam. We’ve improved it with extra features and optimized it. We’ll see how it goes. But it’s hard to market a game that’s two years old."

For now, the team are working towards getting the game out. They are showing belief in an organization that pays low wages but rewards communal success with a generous and democratic bonus.

In the meantime, there are some relief mechanisms. Employees with children are paid slightly more than those without. Denmark has a generous social security system. But still, it's going to be a tough few months. Some of the team are taking out loans in order to see themselves through to the game's release.

"From an economic perspective it’s definitely a huge gamble," says Denning. "There is a chance of a big payoff, which is good. To me, that’s not really so important. I obviously hope the game will sell really well. It’d be nice for me if I could get my salary closer to an average salary. But I don’t feel like I'm wasting my time if the game doesn't sell well.

"I’m happy to make computer games with people who I bond well with, people who are passionate and making the games they want to make. My main reason for working at BetaDwarf is about the game we are making and the ability to live off what we love."

Denning says the atmosphere is more relaxed than any place he's worked at before. "Obviously, we are a bit pressured economically but that pressure is alleviated by the fact that we’re in a good mood and we like to be in each other’s company."

"It was only a few bad decisions, and the whole company is in jeopardy"

"These guys have already been through a lot," says Kabbelgaard. "It's disappointing that we face this scenario. We had a fantastic debut game with Forced, and then it was only a few bad decisions, and the whole company is in jeopardy. The good thing about this is that everything is just so open. Nobody blames anybody. Everybody’s had their chance to influence decisions. In that way it was a bit more OK. But I've definitely had problems sleeping."

After the meeting when everyone was told their salaries were gone, there was some brief talk of hitting a bar and having a few drinks, in the time-honored tradition of bad-news-at-work days. "We actually went straight back to work afterward," says Kabbelgaard. "We did say that if people needed to think about it or whatever, they could go out, but nobody did. Everybody just went straight to work. It was a motivating experience, I think, because everyone felt that they were part of the same problematic issue. That’s based on the company formula we have, where everybody is in this together and also, everyone gets a big win if we actually succeed."