A trio of MMO veterans is pulling together a game in which strategy, not grinding, is paramount.

Todd Coleman likes to tell a story that, he says, illustrates how his MMO Crowfall differs from most multiplayer worlds.

"Imagine you visit your family, once a year for Thanksgiving," he says. "And, every year, you all gather around the table for a game of Risk.

"Now imagine that, instead of playing a fresh game of Risk each year, you are forced to re-enter the same game, year after year, dealing with the dominant advantages and crippling disadvantages that players have accrued in the past. That's no fun at all."

His point is that most MMOs are persistent worlds in which the player is forced to make an accommodation with a long heritage of other players' achievements. Crowfall will differ by offering persistent players, but worlds that reset themselves after games are completed. It is a multiplayer universe of finite strategy games that supernova continuously.

If this sounds perplexing, different and counter-intuitive to the received idea of the dominant MMO, then you're starting to get the picture. Crowfall is designed to not be like World of Warcraft.

Coleman's past is rooted in MMOs. He spent the last few years running a persistent world popular with pre-teens, called Pirate101. But prior to that, he made Shadowbane, a PvP innovator published by Ubisoft that fell victim to its own inherent instability and the shifting ground of business models, rocked by the coming of World of Warcraft and of free-to-play.

In 2013 he partnered with another name in MMO design, Gordon Walton, best known for his work on the likes of Ultima Online and Star Wars Galaxies. They launched a company called ArtCraft Entertainment in Austin, Texas and began hiring MMO veterans to work on the new game.

One big name helping out on the effort is Raph Koster, who was the lead designer of Ultima Online and creative director of Star Wars Galaxies as well as the author of the highly regarded book "A Theory of Fun for Game Design."

The super-simplistic elevator pitch for Crowfall is ... it's Eve Online meets Game of Thrones.

These luminaries are being used to push the game's Kickstarter campaign, which launched today. The pitch cleaves to the notion that this MMO does not seek to break any records for user numbers or to redefine the notion of MMOs. It seeks to create a sustainable world enjoyed by a loyal audience, to create a game in which notions like crafting-based economies and large scale PvP strategies become, once more, staples of the MMO.

Crowfall is certainly different to the MMO-model as represented by WoW. It is not about raids or instances or leveling up via endless battles against monsters.

But this departure from the gravitational pull of WoW doesn't mean it's an entirely alien concept. It takes a lot of its lead from ideas that were primary in Ultima Online, that were explored more fully in the satisfying economy of Star Wars Galaxies and that play out in the vast society that is Eve Online.

The super-simplistic elevator pitch for Crowfall is ... it's Eve Online meets Game of Thrones. The game is advertised as a "throne war simulator," but if this seems a tiny bit marketing-ish and opportunistic, it's clear that the team is wholly devoted to the idea of progressing the idea of MMOs. 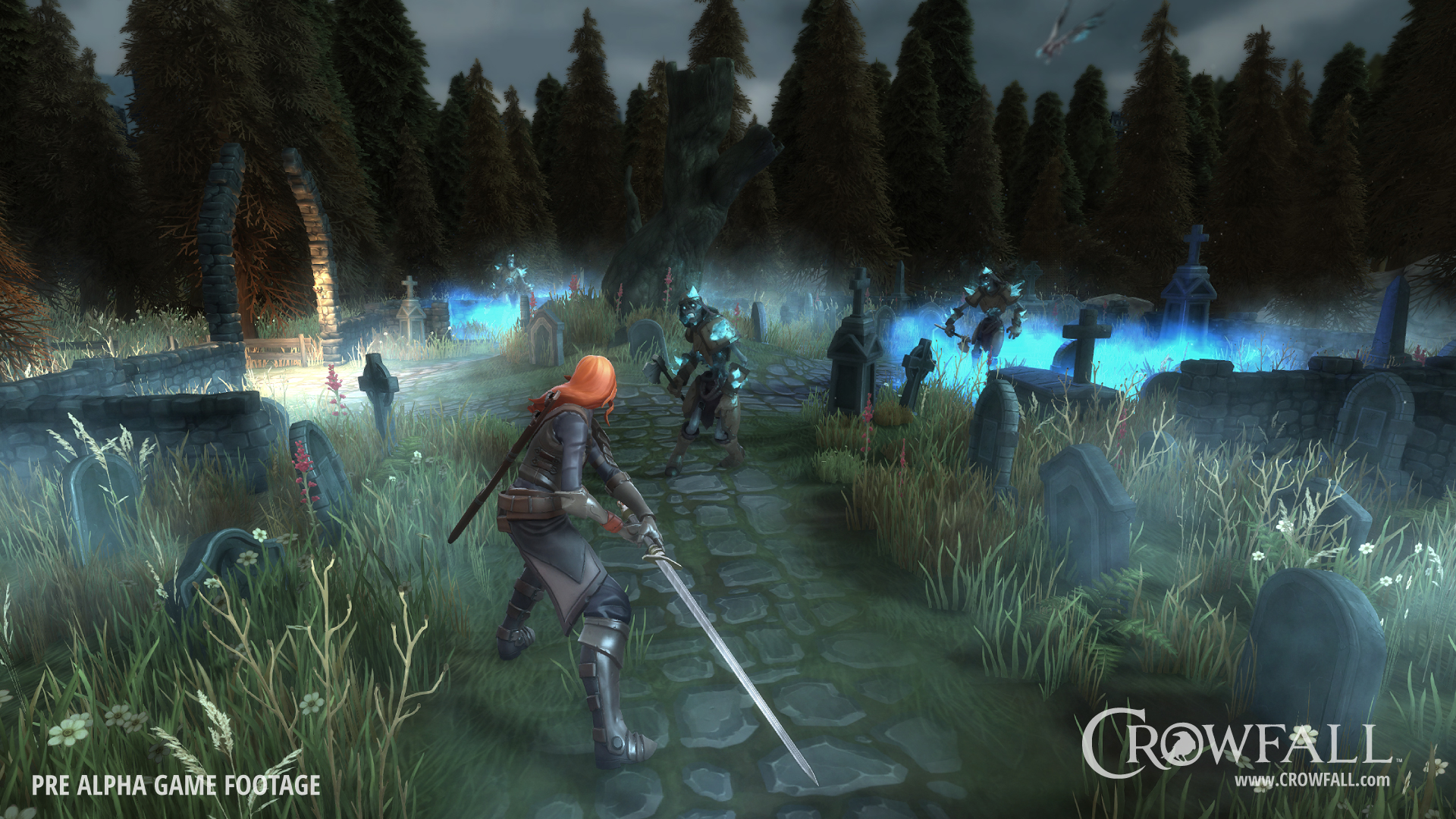 In Crowfall, the player is an immortal who resides on a permanent patch of land in a peaceful realm, a safe place, along with all the other players/immortals. That patch can be grown and developed. The player becomes more important and illustrious. But here's the rub: The resources needed for expansion can only be obtained by going off to unsafe places, to war.

Opportunities present themselves in the form of random worlds spawning throughout the universe, sometimes with different rules and always with one thing in common: the worlds are dying. They can last a week or a month or six months, but your job is to go in, claim victory and get out with the spoils of war.

In a way, it's rather like a medieval lord, comfortable in his castle in France or England, who journeys to the Crusades in search of glory and honor and, perhaps, riches.

In the beginning, these combat worlds are mysterious to the player. The first phase of each game is akin to an online survival adventure, in which the urgent requirement is to find basic resources. The next phase is to find allies, either through alliances of convenience designated by the individual world's design (factions, if you like) or by meta-game guilds.

"These campaigns aren't just instances," says Coleman. "They are fully populated, continent-sized MMO servers. The only thing they have in common with an instance is that they are time-limited."

"Crowfall is a hybrid of strategy game and MMO."

Working together, players seek out resources and supply lines. They scout out enemy positions. The worlds are voxel-based and so destructibility and building are key to attack and defense. Battles take place. The winners return home to enjoy their newfound plunder and their enhanced social status.

You begin to see why this game is being tilted as a strategy RPG in an MMO world.

"Characters are permanent, and advance over the course of many campaigns," explains Coleman. "This gives you the feeling of persistence that we’ve come to expect from MMOs. But the campaigns themselves aren't permanent. They are persistent while the campaign is going on and between game sessions, but they don't last forever."

At present, various archetypal characters have been unveiled, showing a points-based character-creation system that allows the player to go in their own direction. This is a world of sword and sorcery but, as yet, the specifics of combat are still in a fairly early design stage. Even so, this underlay of worlds that come and go and act like board games for the player, is very much advanced and is core to the experience.

"MMOs have been caught in the paradigm of leveling up and grinding for so long that I think it's going to be a real surprise to once again see an MMO based around this kind of freedom of action and conflict," says Koster. "Crowfall is a hybrid of strategy game and MMO. It also echoes back to the early days of MMOs with robust economies and rich player freedoms."

Coleman says he is confident that players will respond to this idea, based on his experiences with Shadowbane. Due to that game's server issues, it needed to be rebooted, from scratch. wiping out the entire player-society. "I was worried that we would lose a lot of players after the wipe," he recalls. "But players were really excited and activity spiked after the reboot."

"We have worlds that end up destroyed," says Walton. "Players can win big but they can also lose big. Our game is all about tension and consequence, not about grinding to level-up to playing some end-game. Our entire game is end-game."

The Game of Thrones motif in Crowfall isn't just a matter of settling on a useful marketing branch. The team recently hired artists Mike S. Miller and Marc Simonetti, who supplied art for the Game of Thrones books.

You can see the connection. "We wanted to find a stylized look for our characters while still having a maturity about them, if that makes sense," says Greco. "There's a line between being too cartooney and too realistic."

"In the past decade, many MMOs have relegated crafting to an ancillary position, preferring the convenience of loot drops for adding to a player's wealth and armory. Loot drops are way easier to control than crafting, especially in a trade and barter economy.

Crowfall encourages players to make use of resources in order to craft items and trade them. So the game is underpinned by an economy based on resource-collection, manufacturing and trade, always tricky things to keep in balance.

It's this aspect of the game, more so than combat or world-building, that takes the most design effort. It's also why many MMOs prefer to dodge overly complex trade dynamics.

"I'm biased, but MMOs are certainly the most difficult of all the sorts of game design I have done," says Koster. "The thing about designing an MMO is that you aren't designing a singular game. It's more like one game for each of the major play-styles, but they all have to interconnect. And I don't mean classes that fit into a combat game. I mean really different play-styles, like the pure social player or the economy manipulator.

"And then you have to design social systems on top of that, sort of like trying to design Facebook and IRC and Mint and more all at the same time. It all interacts and all tangles together, and it's incredibly important not to lose sight of details, because even a small change in any one of those systems can have huge knock-on effects."

The crafting system will allow players enough latitude to experiment and create items that may have value on the market. Players who are time-rich will be able to sell gear to those who prefer to not spend too much time seeking out resources.

This raises the dreaded specter of pay-to-win, but Coleman says it's not so crude. "For one, we are not selling anything to the player. Someone is having to craft those items." Also, there are only some worlds were bought items can be used. Coleman says players have no cause to complain. "It's like moaning about a restaurant in a town you'll never visit, not serving a beer you don't even like," he says.

Making MMOs is difficult in and of itself. This difficulty is exacerbated by the dominance of a small number of games, which tend to define the genre within fairly narrow criteria.

"At some point tissue paper ended up being called Kleenex, as that was the dominant brand," says Walton. "The market is so dominated by WoW, MMO also has come to mean WoW, as it dominates the Western marketplace. We love WoW's success but we believe that MMOs should have a much wider range of expression than the WoW experience delivers.

"Funding entities such as publishers all have big WoW envy, and it has inordinately influenced how MMOs have been made in the last 10 years. This has led to some creative stagnation and a lot of lost investment money. It is now cheaper than ever to build and deploy complex software due to the advancing middleware and commoditization of server and database costs. This combined with the crowdfunding phenomenon opens up the opportunity for small companies like us to challenge the status quo. We're excited about working to moving the MMO medium to a wider palette than the WoW template represents."