In the beginning, there was a painting …
and little else.

Campo Santo revealed itself to the world in September 2013 without a game. Veterans of Telltale Games (The Walking Dead) and Klei Entertainment (Mark of the Ninja) founded the studio, backed by the renowned Mac developer Panic.

Six months later, in March 2014, Campo Santo revealed its first project, Firewatch. Details were scant, but a single painting by Olly Moss, an artist perhaps most famous for his gorgeous Star Wars trilogy posters, set the visual tone that you can see above. An FAQ on the budding developer's official site revealed that former Double Fine Productions environmental artist Jane Ng was also at work on Firewatch.

At a 2015 Game Developers Conference session, Ng took the stage to chronicle her work on a game that she's still building. It's the story of constructing a fully 3D world for a "narrative exploration game," as she calls it. But before she could build anything, Ng had to study Moss' painting. Because, in the beginning, Firewatch was little more than that.

Scroll down to browse a gallery of Firewatch images and learn more about the game's development. Click on each image to read what Ng said about creating a world at once stylized, emotional and believable. 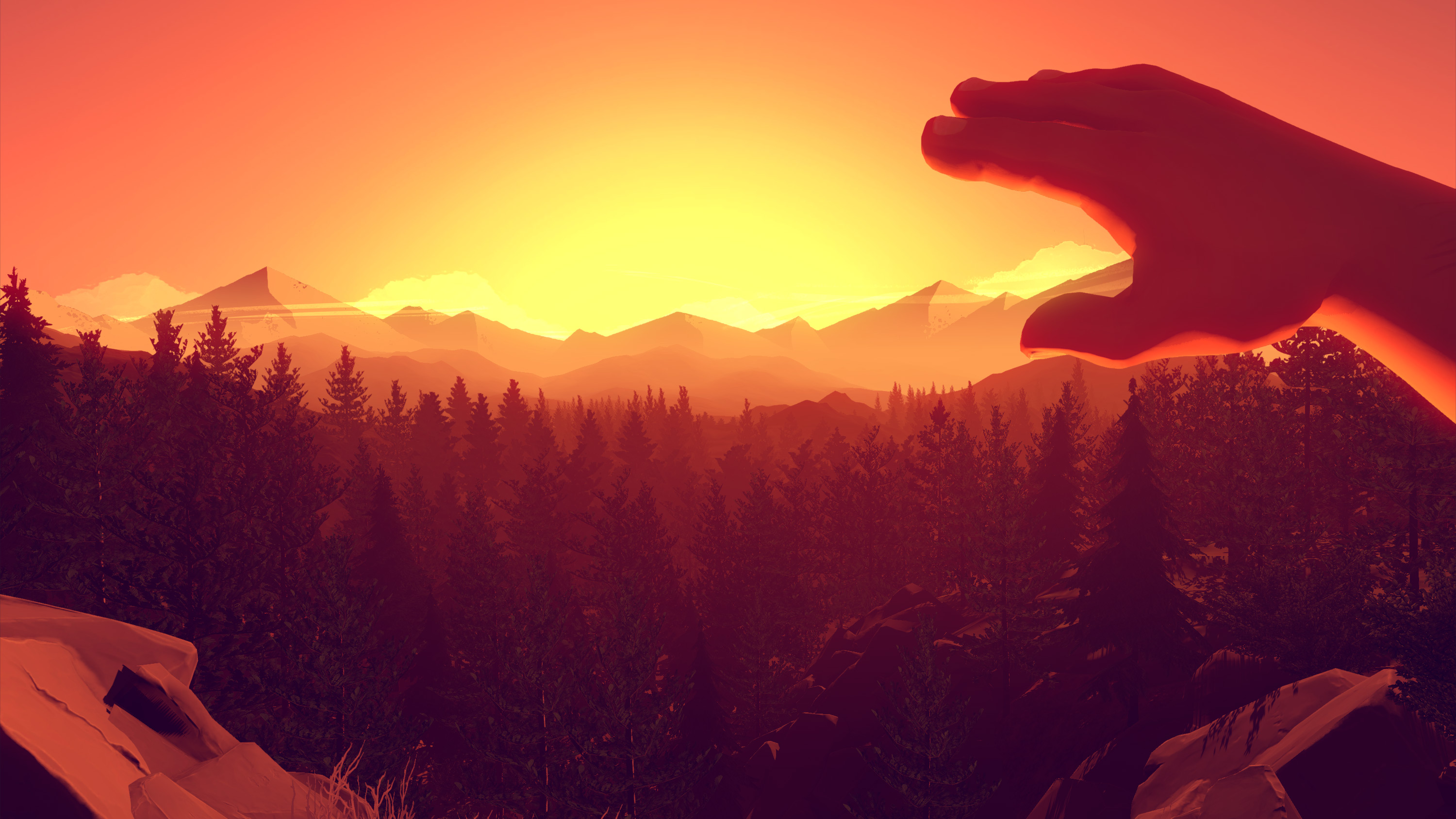 Firewatch takes place at a "a very specific time at a very specific place," Ng said: the Wyoming wilderness of 1989. Players will take on the role of Henry, a portly, middle-aged man alone in the wild, whose only contact with the outside world is a woman he communicates with through a walkie-talkie. The isolation, the disconnection, the wild terrain: They added up to a world that is, in short, mysterious. 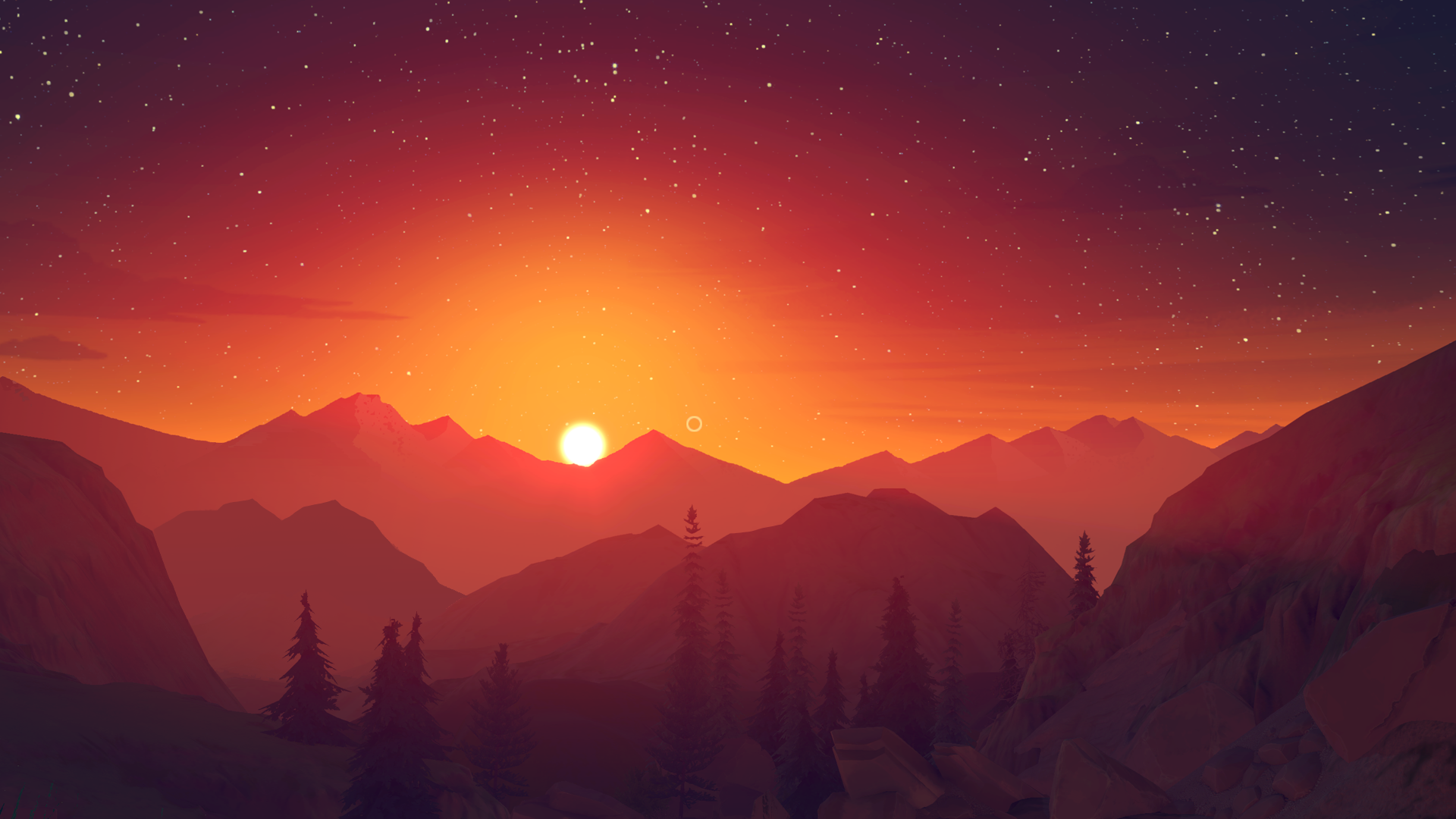 You don't have to know the story to understand the mystery, Ng said. Firewatch's nature was apparent in Moss' original painting. Bold colors, layered, created a sense of depth and distance. The orange and red tones conveyed sunset and mystery. Shapes like trees and mountains are flat, and their silhouettes strong.

When turning the painting into a fully 3D world, she needed "a dynamic solution" that would retain the core look of the original paining while being interactive. The fog effects and dynamic lighting systems work together to achieve those effects as players move through the world. 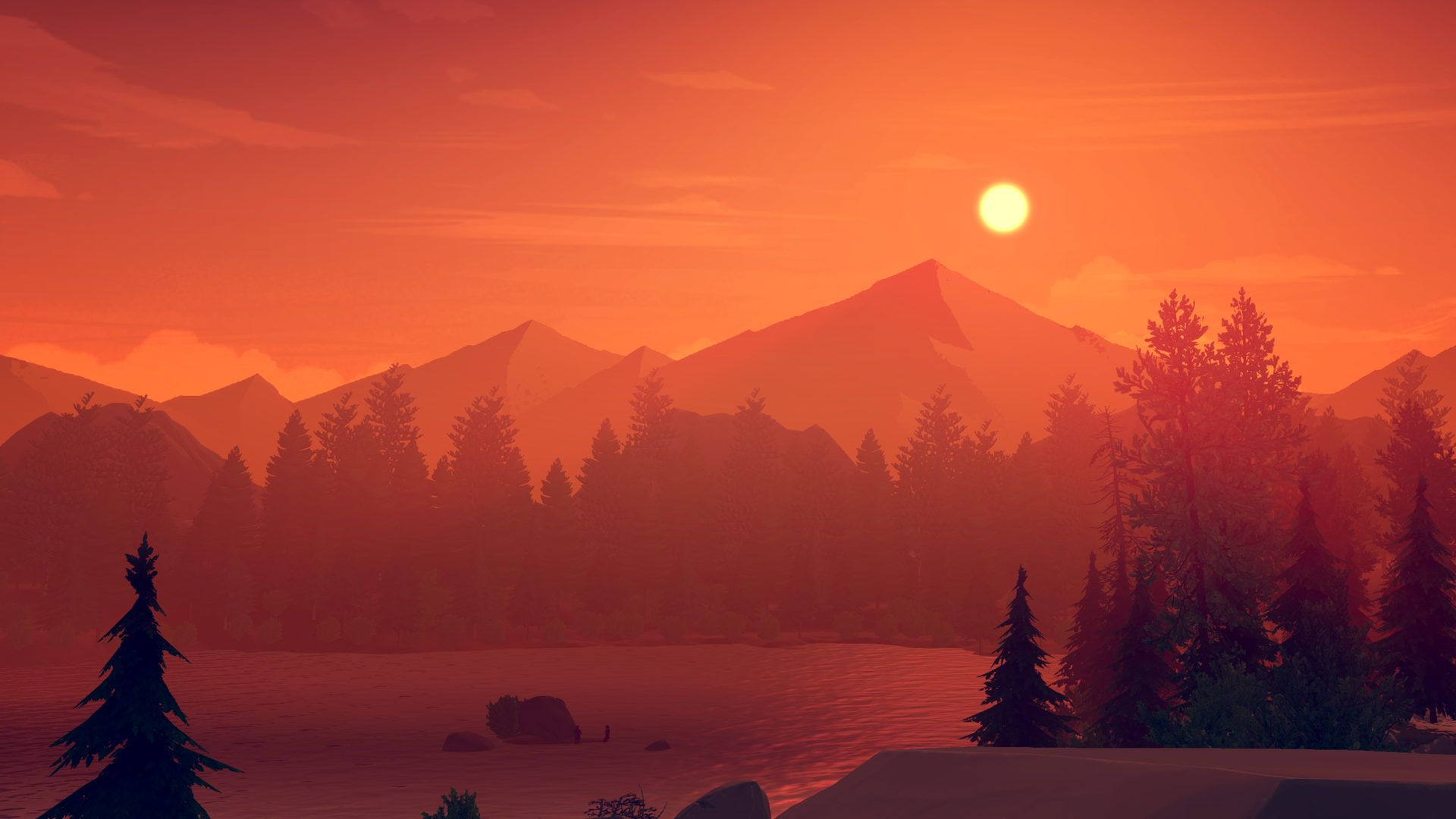 Compare the mountains in this screenshot to the Moss' original paining, and you'll see what Ng is trying to achieve. They're 3D, but their art style — few colors, few details, crisp and defined edges — makes them look flat. They're obviously mountains, but stylized and simplified to fit the overall artistic vision. 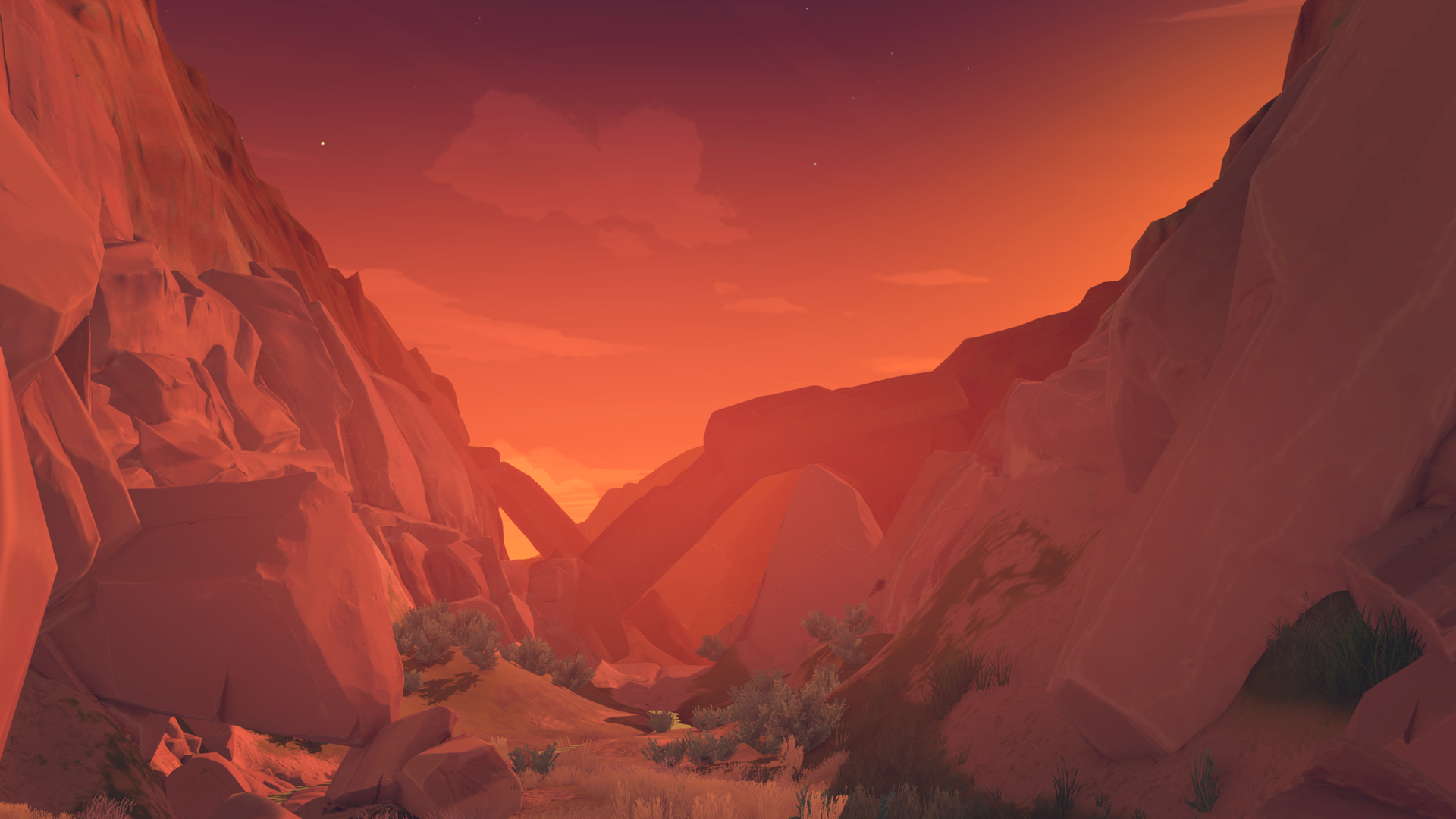 Campo Santo is a small team building a big world. It has to be efficient. That's why Ng uses "rock words" to write "rock sentences."

The developers are saving time and money by creating a relatively small number of assets and using them in different ways. Firewatch may be filled with rocks, for example, but their variety is an illusion. Instead, Ng twists and turns the same rocks so that they look new wherever they're placed. 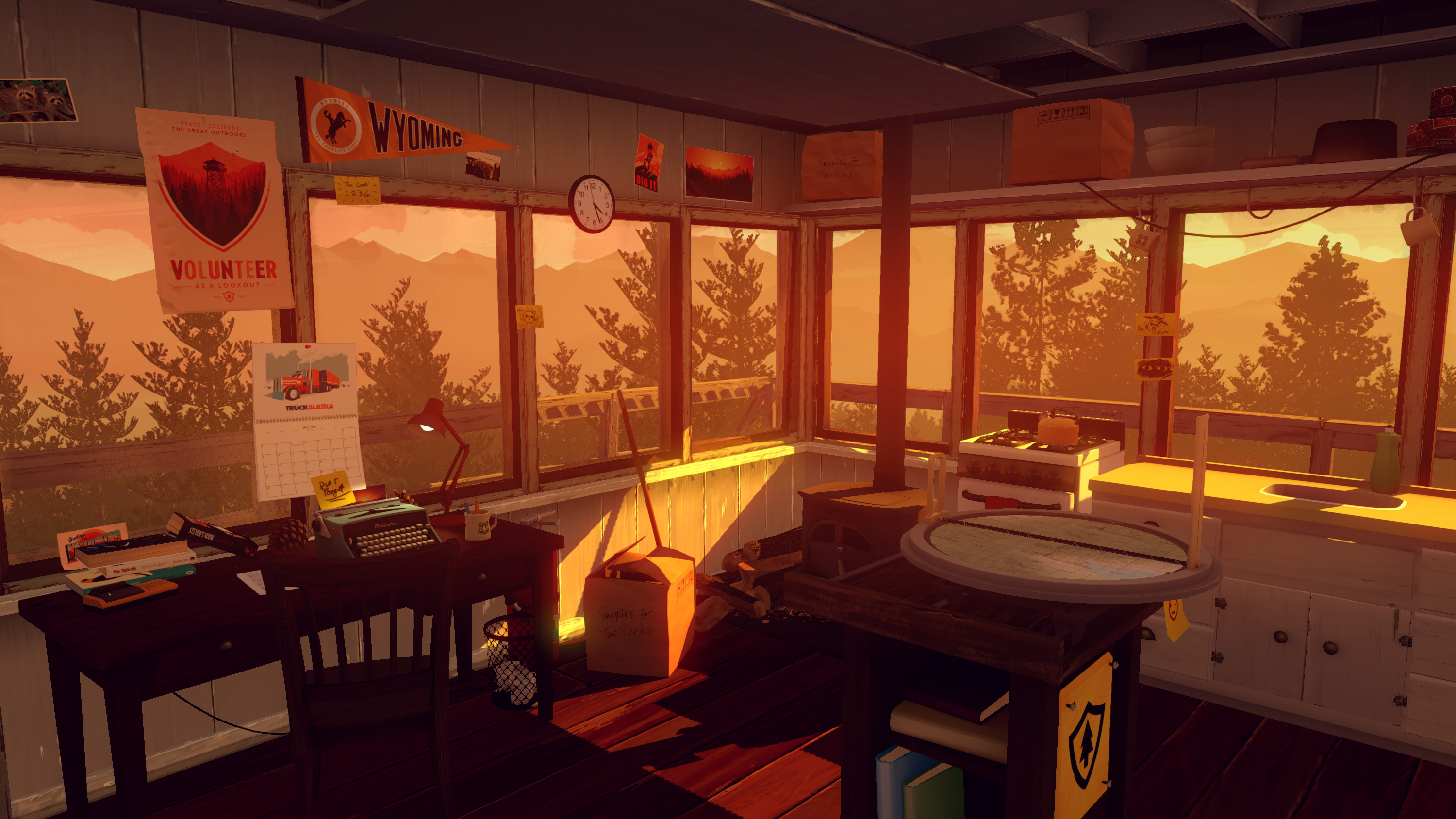 Despite its deliberately artistic nature, Ng says Firewatch needs to be believable. It "must feel real."

Narrative lies at the core of the game, and art can either help or hurt its delivery. She paid particular attention to the cabin in which Henry lives. As the character's and the player's home base, it needed to be grounded in reality. "The art really needs to support this sense of realness," she said, no matter how stylized the game is. 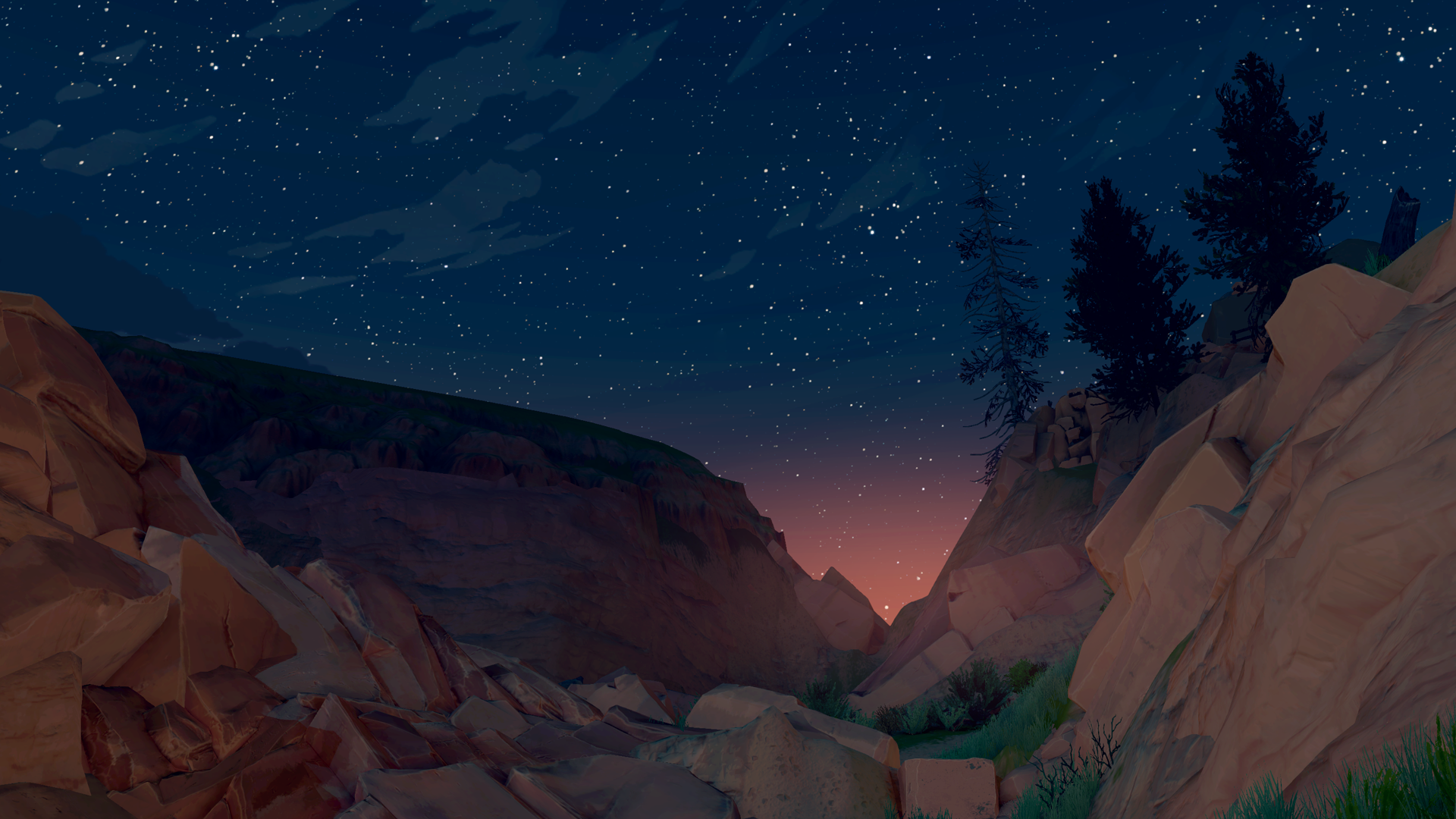 Firewatch has a strong sense of color, but it isn't monochromatic. The sky plays a huge role in the look of the world, though perhaps not explicitly.

There are sections, Ng said, when it accounts for half of the player's screen. Times of day will change the colors of the world, and Campo Santo created a way to change that dynamically. In Firewatch, as the sky changes, so does the world it illuminates. 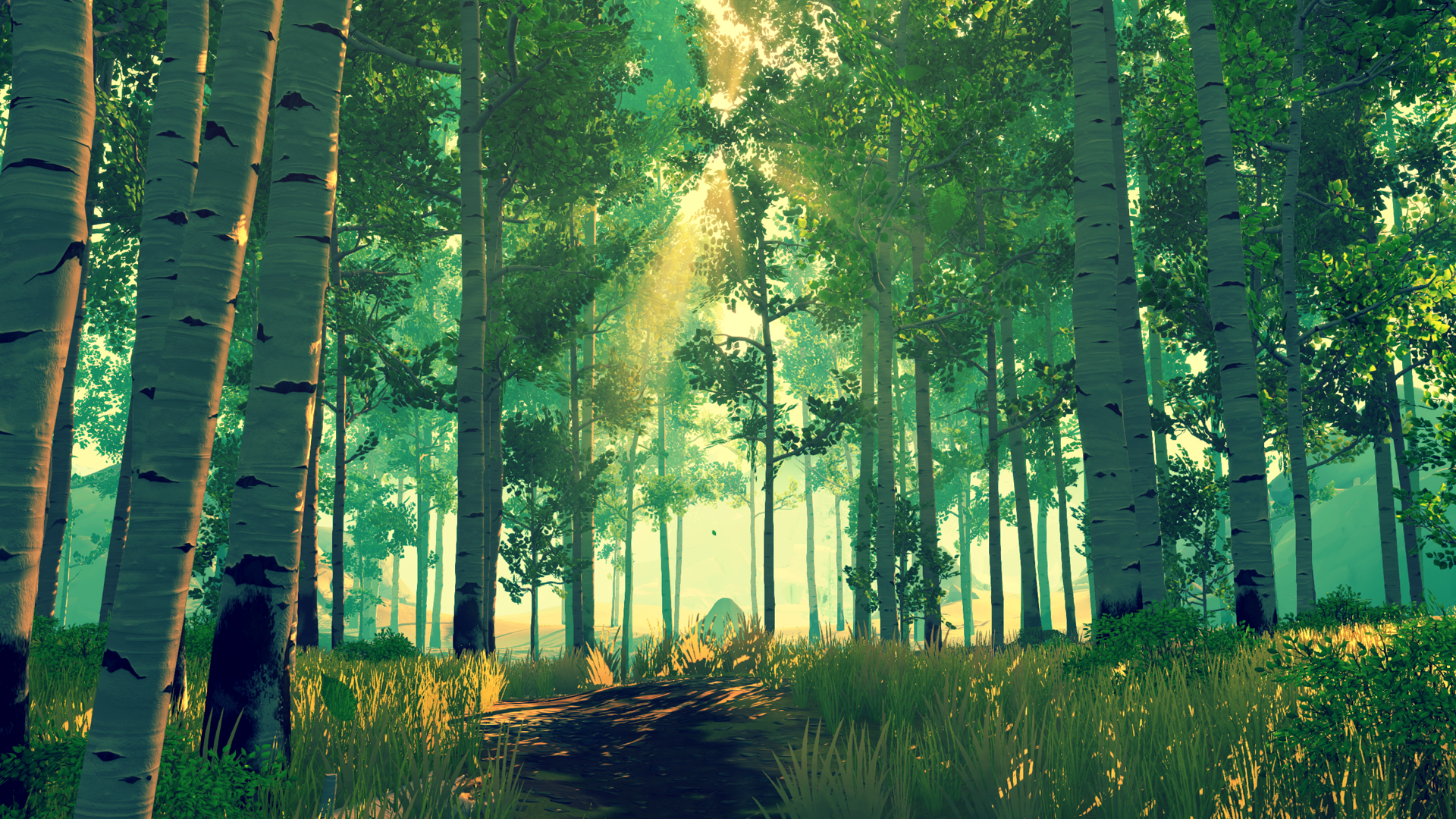 Firewatch isn't all Pride Rock and open sky. This is the wilderness, and that means forests.

Light plays an important part here, too. Though the sun is obscured, it casts its rays through the foliage above. And just like Moss' paintings and the mountains in the images above, the farther away you look, the more the world fades into simple colors and fewer details, whether you're looking at mountains, rocks or trees. 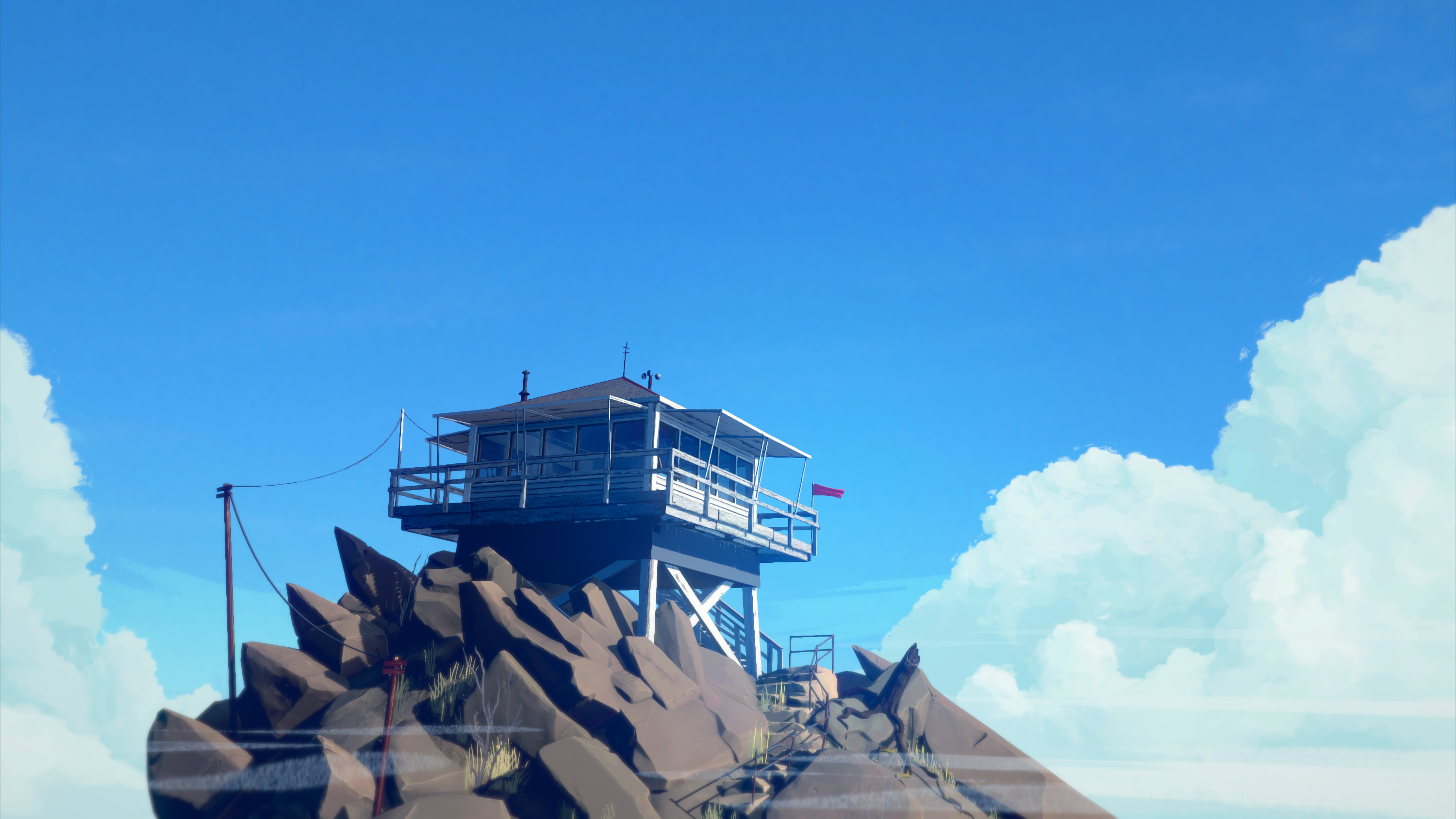 This is Firewatch: The same game, the same engine, the same general geographical location as all the rest of the screenshots here. But it carries a different "emotional tone," a term Ng used several times. It looks and therefore feels different than the somber, sunset-filled shots that the game is known for.

Perhaps that's because, in Firewatch, this is home.