The intimate particulars of Kitty Powers

Rich Franke is a game developer with an impressive resume that includes Burnout Paradise, Need For Speed: Hot Pursuit and Tearaway.

He is also drag alter-ego Kitty Powers, who is the focus of his first independent game, a charming, funny and engaging dating sim called Kitty Powers' Matchmaker. The game asks players to assist Kitty in running a dating agency, helping characters find the perfect partner.

Bursting with delightful innuendo and satisfying double-entendre, this good-natured game offers up memory quizzes, logic puzzles, dialog traps and random events in order to simulate the deep mysteries of dating.

Players are expected to guide their clients through the tricky maze of love, connecting lonely hearts who are looking for that perfect soulmate. The cartoonish art style fits nicely with the game's appealing spirit.

Franke (below) tells Polygon about his relationship with Kitty who has "been around the block for a few years now," he says.

"Kitty Powers is my stage name," he explains. "Managing both of these personas is tough. Originally I liked to keep her very much in the third-person. I can see why the drag queens on Rupaul's Drag Race just operate under their stage names.

"However I'm not a full time drag queen. I'm a game developer. That's my full time job, and not every game I make will have Kitty in it. What I would like is for Kitty to host video game themed events like charity fundraisers and appear in occasional video games. She isn't a commercial character like Mario or Lara Croft; she is a part of me and it's important to differentiate that both in and out of the game world."

"This game is a very personal reflection of me."

His new game — developed along with Kieran Keegan with whom Franke formed UK-based studio Magic Notion — is giving Kitty a wider audience.

"I decided to incorporate her into my first independent production for a number of reasons," he says. "Firstly I'd been messing about with drag for a while and I wanted a good reason to evolve it and take it to a new place. Secondly I felt drag and video games hadn't really collided properly yet and this might be a good way to do it. Thirdly I wanted to make my debut game unique, and a real reflection of me and my voice. Kitty seemed like a good way to tick all of the boxes.

"I also wanted to challenge myself to make something diametrically opposed to all the death and destruction that is a staple of video games. Both of these things sound terribly serious and possibly dull, so I wanted to do all of that with a real tongue-in-cheek humour. This is where Kitty came in, along with a shower of sequins. She is pivotal to the whole thing really."

Much of the game's magic is in its humor, a particularly British mix of glitzy camp, social embarrassment and saucy wordplay.

Drag acts have long been a staple of British popular entertainment. The term "Drag Queen" is said to be derived from British slang language Polari, associated with performers and the gay subculture of London in the 19th Century. Polari and sexual innuendo was much used by camp comedians in later years, forming a basic ingredient of 20th Century British comedy, like the Carry On films, famed for their outrageous double meaning.

"The idea that we wouldn't be inclusive never crossed my mind."

"The humour is very much inspired by British comedy like Monty Python and Absolutely Fabulous among many others," says Franke. "The best British comedy travels very well. We feel it gives the game a unique character that you perhaps don't see that often in games. The British have a wonderful combination of formality and earthiness which makes for superbly awkward first dates."

The Kitty we see in the game is just one part of her personas. "I'm still evolving my relationship with Kitty Powers, just as her persona continues to evolve," says Franke. "The Kitty you see in the game is Kitty playing a '70s British sitcom character. It's like "Carry On Dating." She is very much Kitty, but in that style.

"That is not quite the Kitty you'll see if she's hosting an event. Real life Kitty Powers is bit more varied in the looks she puts out there. She will usually have a theme for every outfit, whether that is retro, glam, tarty, gothic and so on." 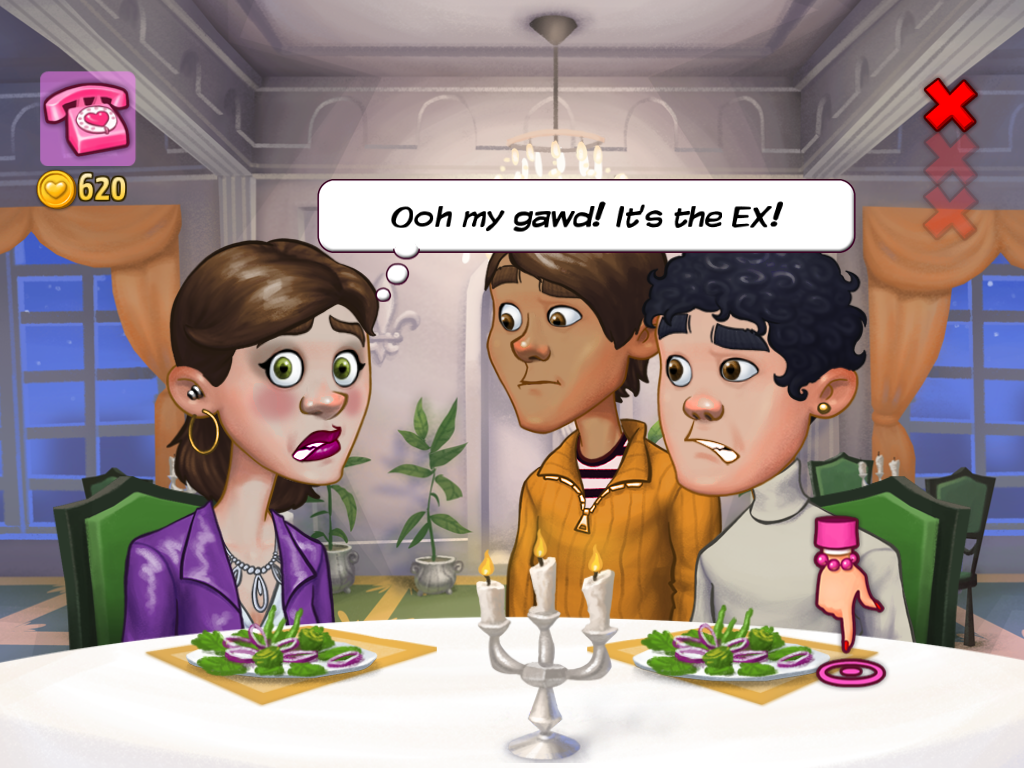 Kitty Powers' Matchmaker was originally released on mobile, converted to PC and then released on Steam last week.

Franke says he underestimated the problem of discoverability on mobile and probably ought to have gone for PC in the first place. In any case, converting the game was not a big problem. Matchmaker does not make use of in-app purchases.

Indeed, under its quirky exterior, there are some interesting game design choices going on.

"I didn't really set out to make a dating sim," says Franke. "I wanted to make a game which had a system that would create very human characters procedurally, and would simulate a very human situation in which they could interact. I really love creating procedural systems and I'd never seen procedural characters done in the way that I wanted them."

During dates in the game, the keen suitor is exposed to questions like, "Do you like my outfit?" and is forced to choose between a frank response or obsequious flattery. The characters' type determines whether the outcome is a happy one, or not, displayed on a quiz-show style wheel of fortune. The date also involves perils like choosing the right food (your date gives you clues) or being nice to the waiting staff (can you recall who served you?).

It's all jolly good fun, but is there a danger that it can all become a tiny bit repetitive?

"My approach to the game was to make an arcade dating simulator," says Franke. "It's the same mentality as the racing games I used to work on at Criterion. The character-types are the cars; the restaurants are the tracks. You play the game over and over and try to get the best result.

"This is definitely not an interactive story. It's more like a dating arcade game. It's like a fighting or driving game. You have events. In this case, dates, which you play in order to earn rewards. There are curve-balls and opportunities to take more risk for more reward. A lot of the game is procedural, so even though superficially it may seem repetitive, you will never play the same date twice."

"Saying that it was a decision makes it sound like there was actually a question of whether we would or not," he says. "We were making a game about relationships and the idea that we wouldn't be inclusive never crossed my mind. I'm very much about making equality normal. It shouldn't even be an issue, so in our game it just isn't."

Meantime, Kitty Powers is attracting fans and followers, as Let's Plays of the game sprout up on YouTube. It's part of a new hunger for games that approach the world in new and interesting ways, because they come from fresh perspectives.

Game developers often use games to talk about themselves, but Kitty Powers' Matchmaker goes further. It features a big part of Franke in the lead role. "This game is a very personal reflection of me, my game development passions and my stupid sense of humor," he says. "Kitty is a very important part of all those things."