How a drinking game was saved by MMO design

Raph Koster is a man of intellectual enquiry and boundless curiosity. So when the designer of Ultima Online and creative lead of Star Wars Galaxies was hired to fix a top trivia game for drinking establishments, he knew he faced multiple challenges.

A company called Buzztime had contacted Koster to reinvent its aging multiplayer trivia game. Koster is the author of a highly-regarded book on game design and is a regular speaker at industry events such as GDC.

Buzztime recognized that the popularity of its game was on the wane. Diners and guzzlers were turning to smartphones for in-bar entertainment. The game tended to be dominated by a small number of hardcore players, competing against one another across a nationwide network.

"The game needed something fresh."

New technology, such as touch-tablets, were being introduced into restaurants, which did not want the grungy old touchpads knocking around. Meanwhile, restaurant owners were looking for new diversions that would keep customers at their tables, ordering high-margin drinks, once the nachos and jalapeño poppers had been consumed.

Once hired by Buzztime, Koster's first job was to find a bar and play the game. He went to a Buffalo Wild Wings in San Diego. While trying to figure out what was wrong with this old trivia game, he ordered some wings. He settled down to play the game and watch others play.

On his first try, he placed in the top ten nationwide. This, he thought, was a big problem. The wings on the other hand, were pretty darned good.

Playing cards or board games while drinking in public spaces has been a human activity for thousands of years. Cards, dice and chess have been mainstays of public entertainment, from the elegant courtyards of the Harappan to the rowdy pubs of Halifax.

In more recent years, electronic diversions such as pinball and gambling machines have offered single-player entertainment to those seeking respite from the outside world.

Trivia contests sprouted up in the 1970s, pitting teams against one another in rambunctious evening events. Buzztime sought to monetize trivia by offering it as an electronic game that individuals or teams could play at any time.

Since its introduction in the 1980s, the game has changed very little. A random question appears on a screen along with four possible answers. To gain maximum points, players press a button on a "Playmaker" tablet which corresponds with their answer. The TV offers clues for those who don't know the answer. As the clock counts down, the value of a correct answer diminishes, until the point where the answer is basically given away.

Koster (above) and Buzztime understood that the problem was not that people didn't want to play games, or even to play trivia games. The game had simply gotten old.

"Over the last decade, we lost our core competency of game design," says Buzztime chief product officer, Bob Cooney. "We brought in Raph to not only help us design this new game, but re-teach our team how to design games moving forward." 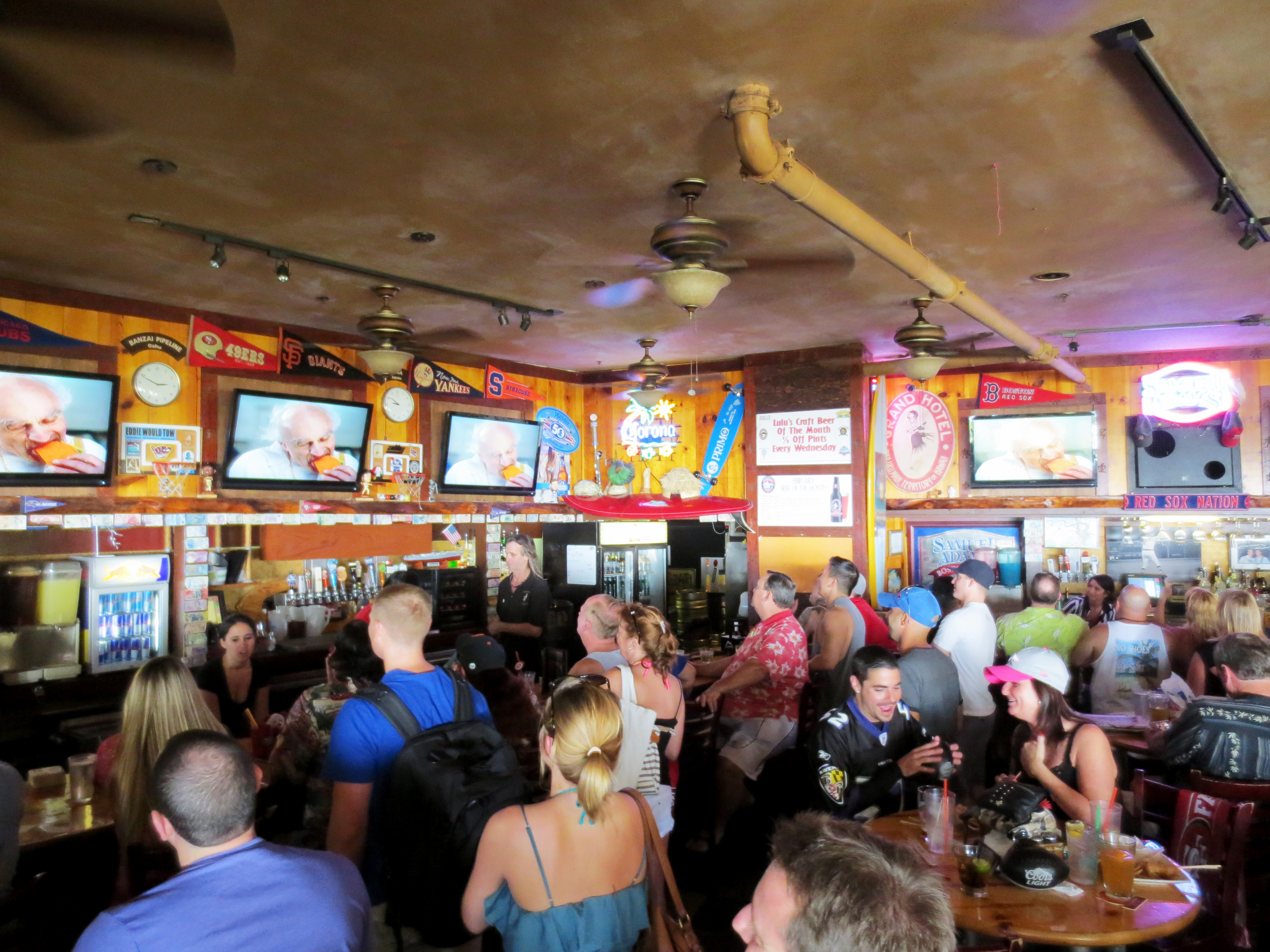 "A bar is one of those third places where you go to escape reality," says Koster. "The fact that Buzztime has been around since the mid-'80s, with people playing networked trivia indicates that people have been gaming at bars all along. Arcade games have always been big in bars, too."

But Buzztime has a big new competitor. "Everybody has a mobile phone in their pocket," says Koster. "It's super common to see somebody at a bar pull out a game and do something for maybe five minutes while they're waiting for somebody to show up. Because of the bite-sized nature of so much mobile and casual gaming, games are everywhere."

"A bar is one of those third places where you go to escape reality."

Koster works as an independent designer and consultant on gaming projects. Part of his appeal is his sharp perception of gaming trends. Apart from pioneering MMOs, he was also an early mover in design-platforms and social media games.

Part of the Buzztime challenge for Koster was getting his head around the needs of the players while they are in a bar.

"The player wants something to do, usually with their friends, often after work," he explains. "They want a lightweight distraction while they can catch up on the day or complain about their boss or whatever. A friends night out." 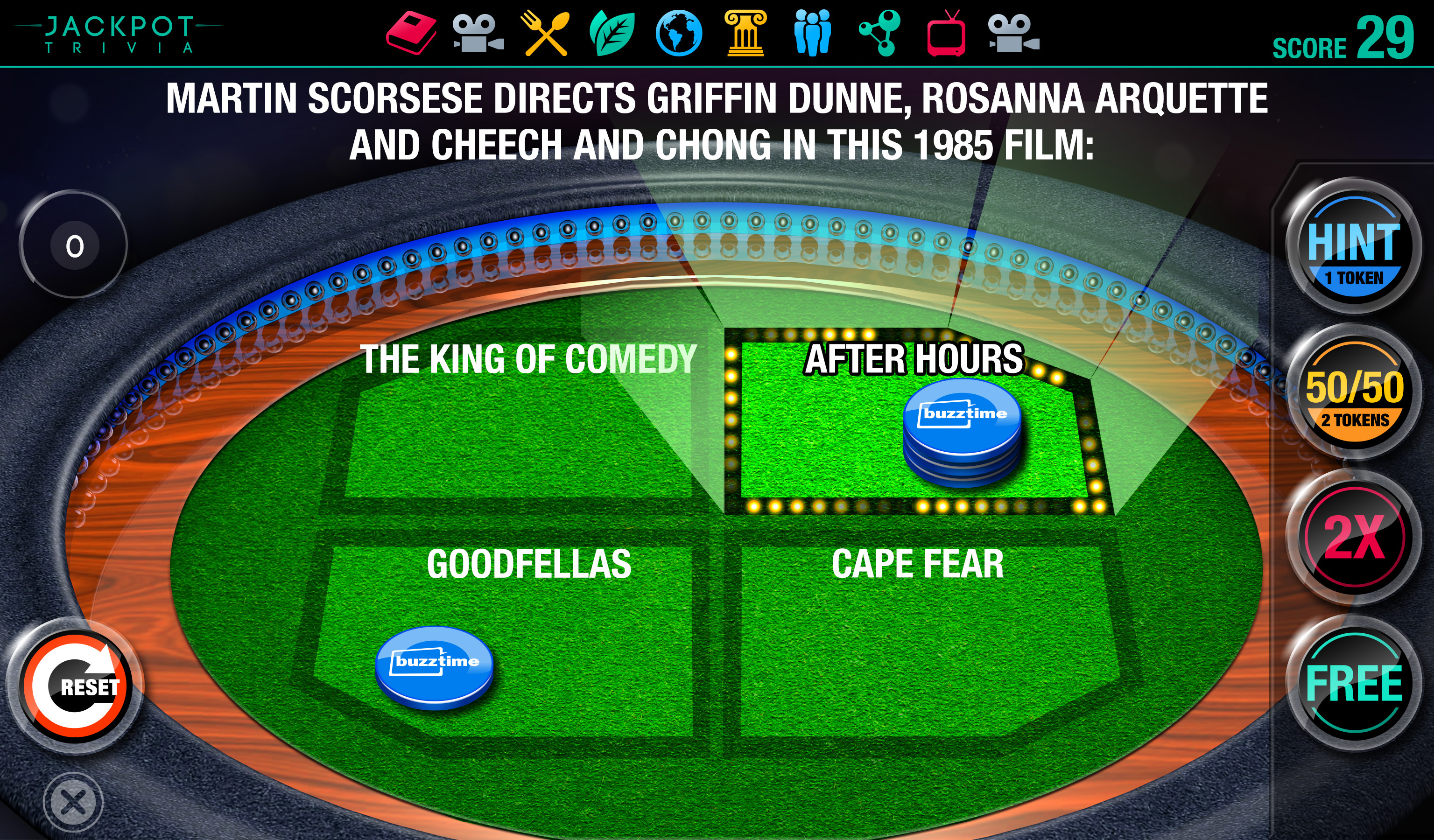 Koster realized that the reason why fewer and fewer people were willing to play Buzztime's older game is one that is familiar to anyone who has ever played a multiplayer game.

"Think of this in terms of League of Legends," he says. "Trivia knowledge is a skill, just as any other PvP [Player vs. Player] game calls for a skill. You are trying to execute well on answering the question using your trivia skill.

"That isn't very different from any number of other PvP scenarios. However, while you get better at League of Legends or a first-person shooter by participating in them, this game doesn't teach you to get any better at trivia.

"The question databases are enormous. Odds that you'll pick up new factoids that you get to later use are really low, because questions just don't repeat. What that means is that the people who will tend to do well are the ones who were already good at trivia."

Koster is really good at trivia, which is why he scored highly on his first go. But few people are this good at just knowing lots of random stuff. They tend to know about the things that interest them, whether that is sports, or celebrities or the lyrics to Disney songs. This is why trivia is best played in teams.

But strong teams of trivia players will always easily best weak teams, which is no fun for either.

"Anybody who's played a first-person shooter with a bunch of 14-year-olds understands this," says Koster. "14-year-olds have much faster reflexes than I have. But there are other things in the game, such as tactics, that I might be able to do better than them.

Weaker players, Koster decided, needed to have a balancing mechanism to help them out. They also needed more control over the kinds of questions they were being asked. If you know a lot about football, it's not much fun to never get to use your expertise, right when it might have some passing value.

Based on more usable touchscreen controls, Koster introduced a new version of the game called Jackpot Trivia which offered various systems in which players can control some of the incoming topics.

Immediately, this showed a vast difference between the questions previously being asked, and those being demanded. Disney movies and superheroes went straight to the top of the list.

Children (generally, not very strong trivia players) were starting to play, as well as a higher number of young adults. This was entirely in line with Buzztime's stated goals. 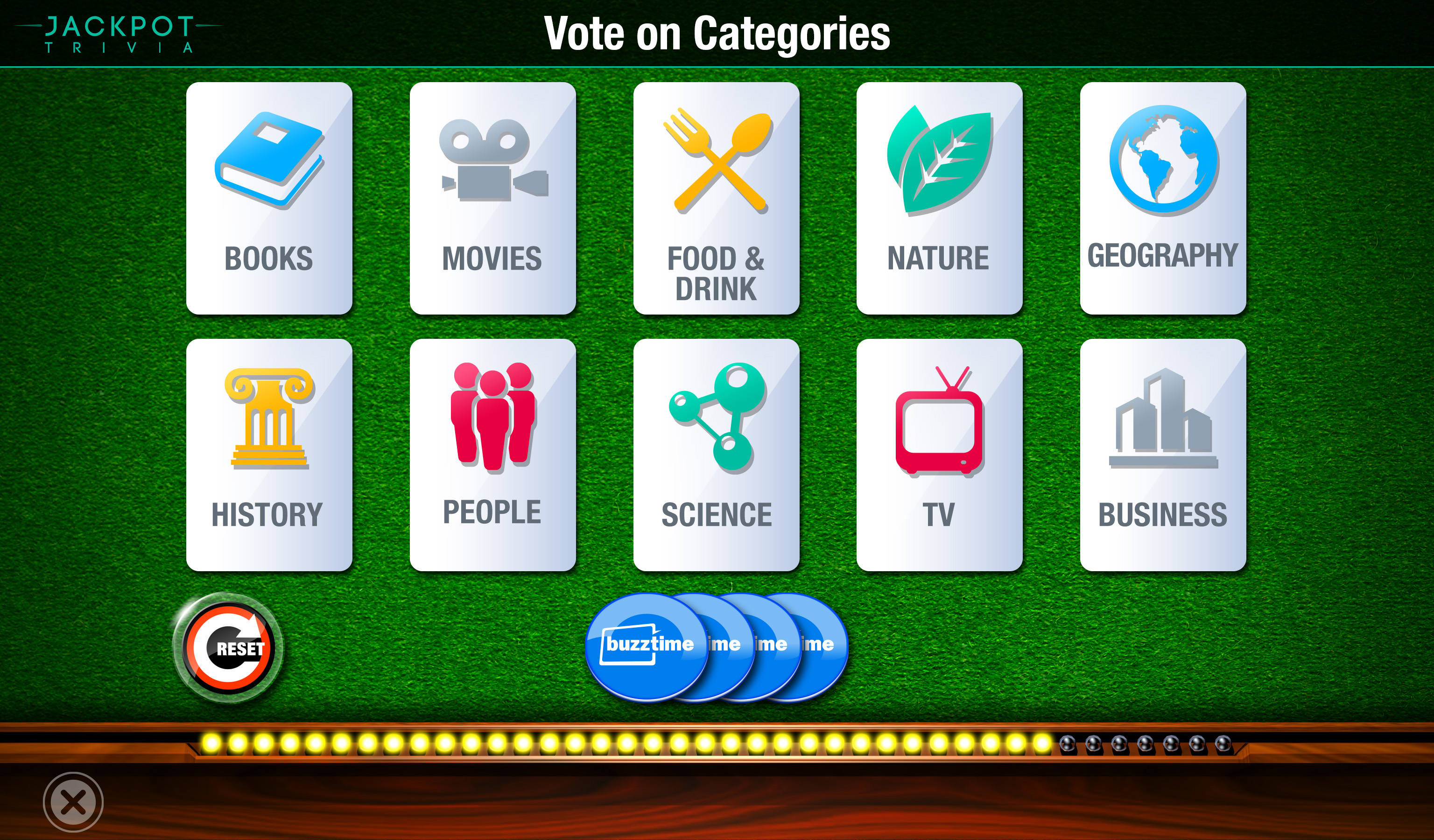 Regional differences also started appearing. There are parts of the country where people have a deep knowledge of Bible trivia, others where hockey is understood very well.

As well as this extra control, Koster also gave players in-game tokens to play with. They could gamble heavily on questions they felt confident in answering correctly. They could split their vote if they weren't certain. They could even take a pass on a really tough question.

This had the effect of allowing people who weren't great at trivia, overall, to play a game in which they felt they had a chance of performing well.

"All of a sudden this meant that people could effectively play a resource management game," says Koster. "There's alternate axes along which to play the game. It's actually a really dramatic redesign in that sense, while still feeling very much like a trivia game."

But what about the hardcore players who want to be challenged, who want a tough workout for their memories and their capacity for knowing random stuff?

Koster found that, while the gap between winners and losers closed, the best players still kept winning, if they understood the game's new systems.

Trivia experts, as long as they wager well, still win. Experts who know the answers but don't necessarily wager well end up competing with people who are good at wagering but not necessarily at trivia.

"All PvP players want a good game," he says. "They don't want to just have a cakewalk. It became more fun for everybody, them included."

"The qualities of MMOs are popping up on everything."

Koster's Jackpot Trivia is now being introduced in a few hundred locations. Buzztime operates in around 4,000 bars and restaurants, but already the new addition has increased game usage by 15 percent.

Much of the improvements came from Koster's experiences of making and playing MMOs, and on the MMO's influence on all games. "These days, a lot of the qualities of MMOs are popping up on everything from social media to systems that sit outside and on top of games, like everything around Xbox Live and Steam," he says.

"But, even though bar games have been around forever, there's something uniquely now about the idea of a networked bar game that you're playing that's massively multiplayer, but you're effectively playing right next to your nachos."