The company that made STALKER is back with their next game, Cossacks 3

Late last year GSC Game World, known in the West as the studio that developed the STALKER games, returned from self-imposed exile. Today the studio announces its next title, Cossacks 3, a remake of their real-time strategy classic.

Polygon spent time with the game’s producer, Evgeniy Grigorovich, to learn more about his history with the franchise, and about the game he’s been waiting nearly 15 years to make. 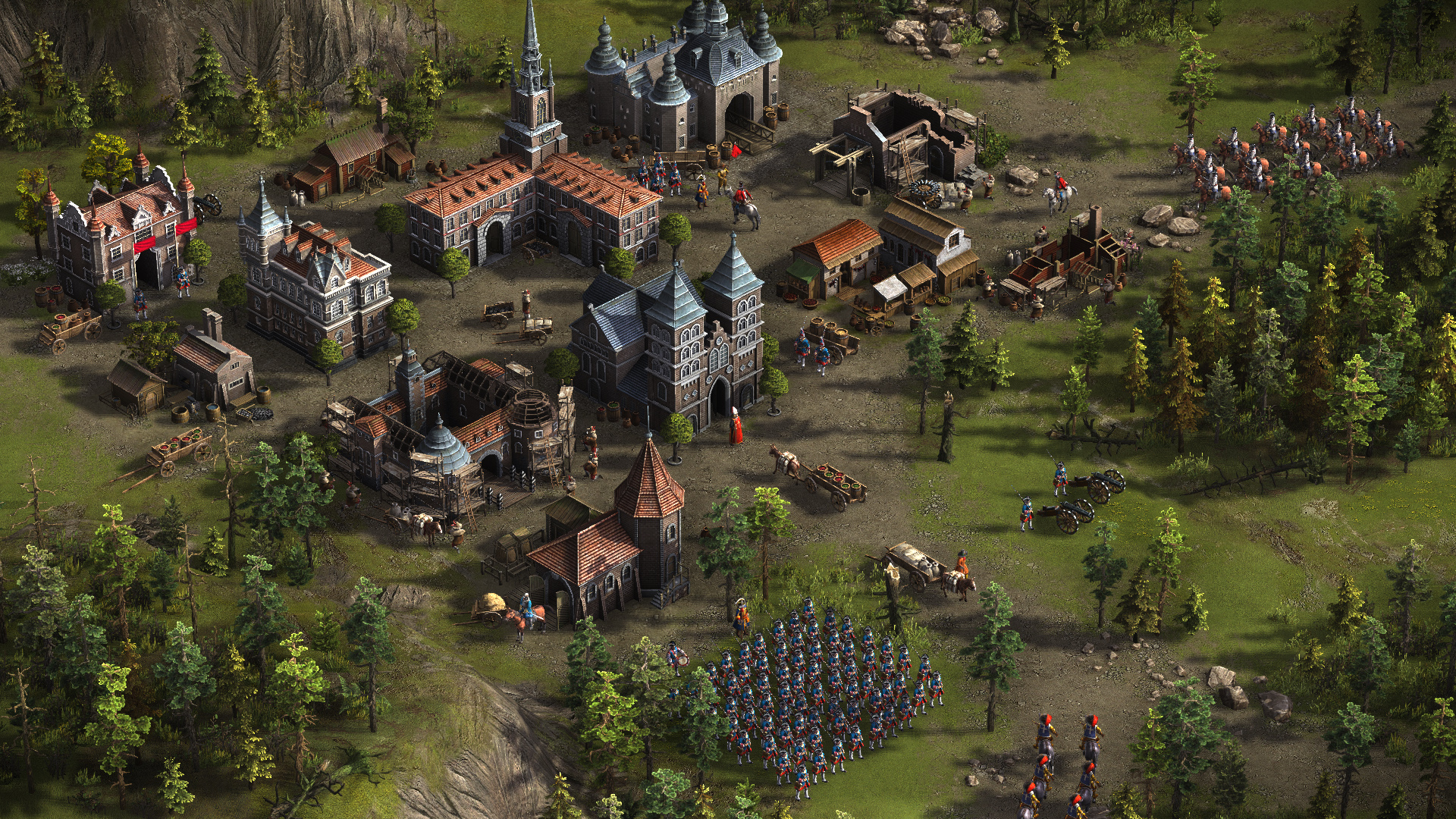 Evgeniy started working for his brother, GSC’s founder Sergei Grigorovich, when he was just 15 years old. At first he was a game tester, crammed into a tiny apartment in Kiev, Ukraine with the rest of the rapidly growing team building the first Cossacks games.

Before long, Grigorovich said, the company grew to occupy another apartment next door. Over the next few years they migrated through five different offices, until the team was nearly 200 strong.

"At first I was a game tester," he said, "later a producer’s assistant. I finished as an RTS project lead." His team, he said, was a completely different group from the team that made the STALKER games.

"I had thought STALKER was a success long before the game was released," Grigorovich said. "I felt it when in the studio, while sitting down with the first playable version. It was just one big level, with several different types of weapons and AI. … It looked amazing.

"At that time the project’s working title was Oblivion Lost, and it was about space portals, Aztec pyramids and robots. Later the game shifted to the Chernobyl Exclusion Zone. … We were among the most advanced companies using new graphics technology." 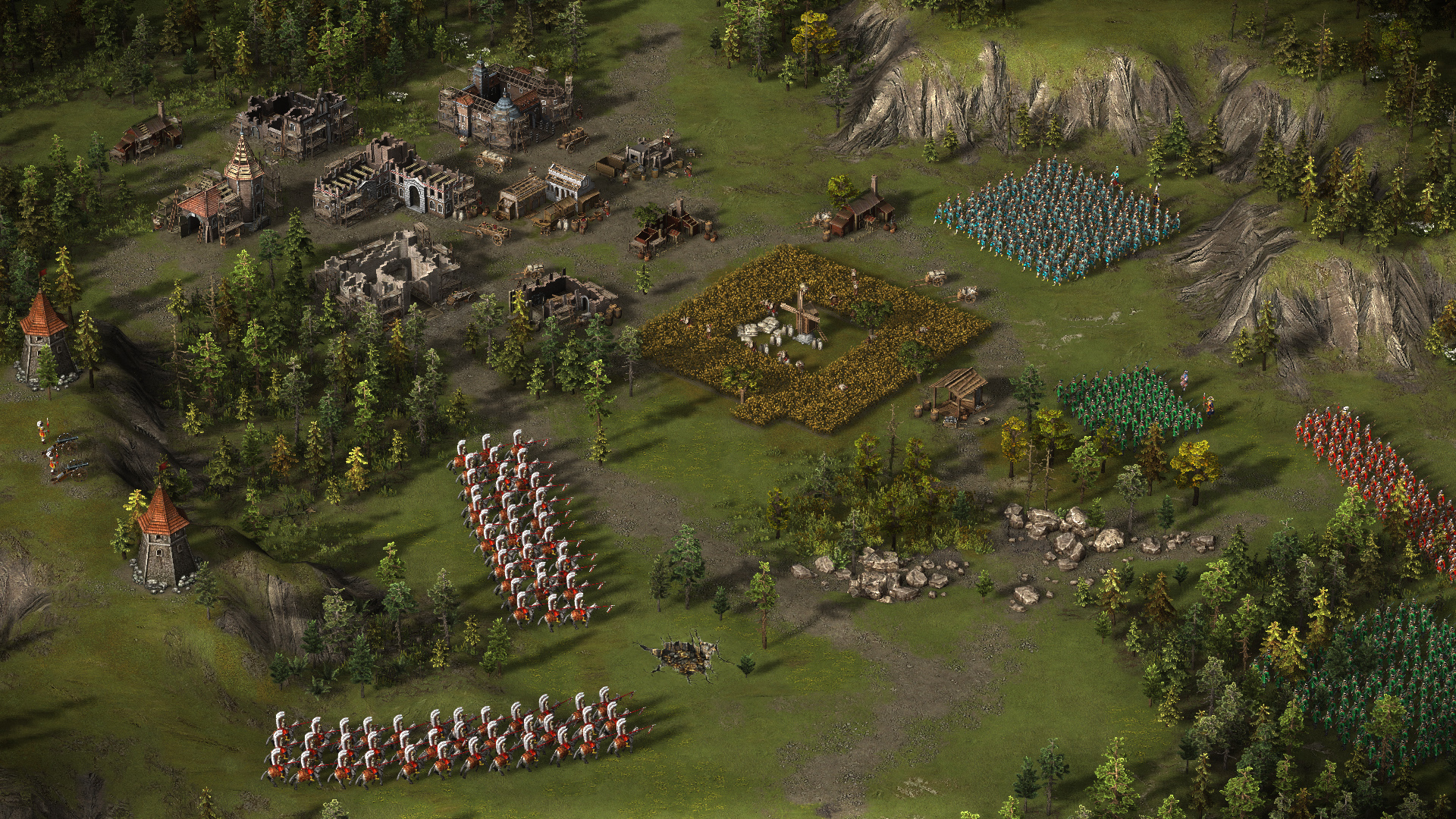 But even then, it was the Cossacks games that kept the lights on at GSC. They were popular in Western Europe, less so in the United States, but an absolute smash hit among players in Eastern Europe.

"The standard marketing scheme of that time implied launching an active campaign a year before the release of a game," Grigorovich said. "Then, after its release, you arranged for many articles and reviews. Ninety percent of all income was to be made in the first 1 to 2 months of sales, and then sales would go down.

"In Western Europe, at the time the original Cossacks was released, its popularity was extremely low, but with each successive month that followed its sales grew. The very peak of its sales was 9 months after release. … The most successful sales were in Germany, England, France and Poland.

"As for Eastern Europe, Cossacks became the national game here. It was the first big game made in the [Commonwealth of Independent States], with a strong national theme. The press liked the game and the studio very much. The sales were very good."

Even in a region of the world known for its piracy, Grigorovich says the original Cossacks beat all expectations and sold over 1.5 million copies in Eastern Europe.

"At that time, the quality of discs printed in Russia was rather low," Grigorovich said. "At high speeds they just exploded in the drive. Since the game was protected by a DRM system, and required a CD to play, there were devoted fans who bought our game 6 times." 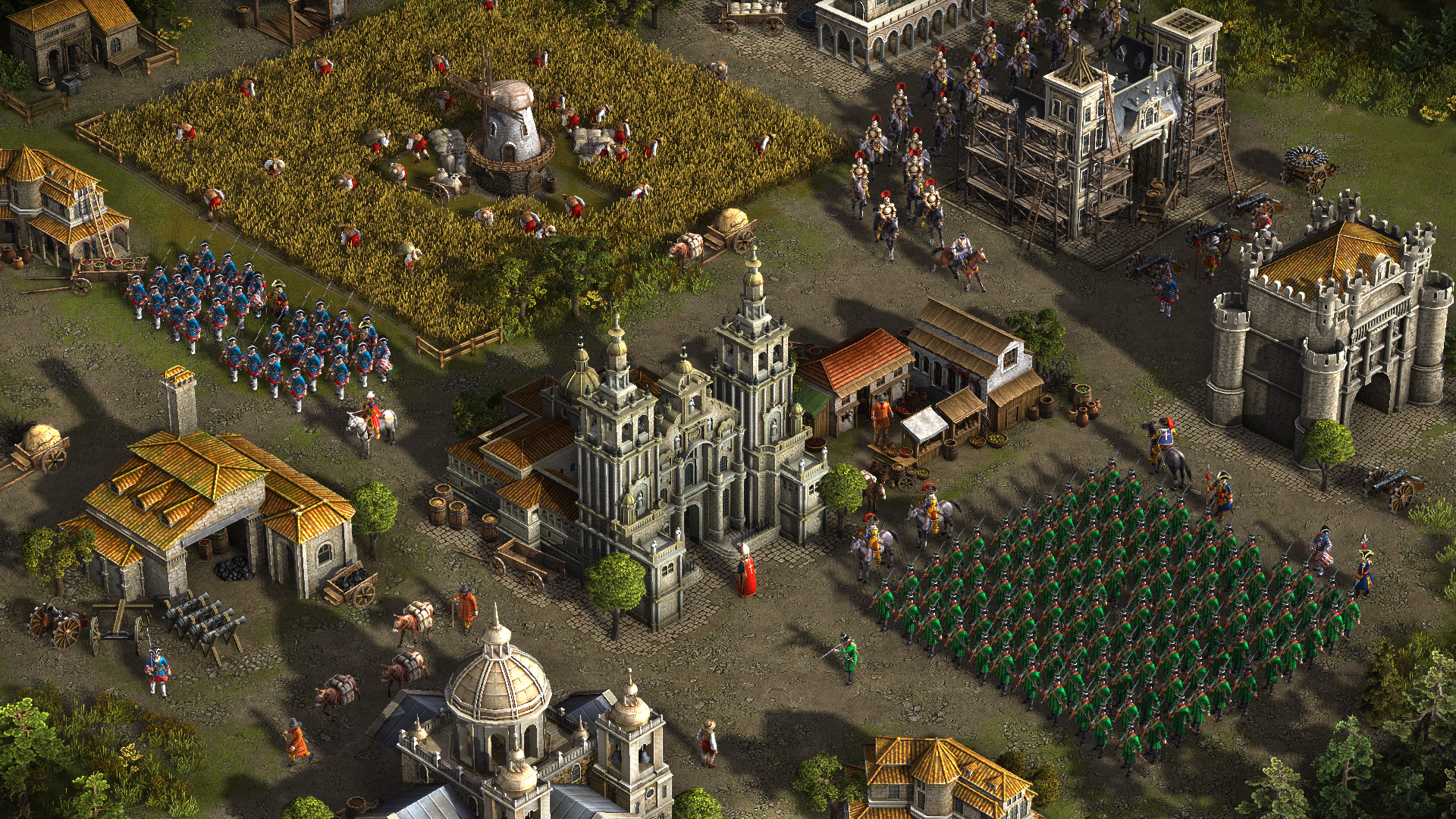 The Cossacks series is known for being a deep historical simulation, set in 17th and 18th century Europe, when gunpowder was changing the face of war. What made it unique was that it allowed players to control huge numbers of troops — originally 8,000 units, and eventually as many as 60,000 at once. Maps could include naval as well as ground-based warfare, base-building and resource collecting, and several large-scale battles all at the same time.

"Each soldier on the battlefield is a separate unit with its own AI, life and combat parameters," Yeltyshev said. "In the majority of RTS games, units are joined into squads and it is possible to take command only over those groups. In Cossacks 3 it is possible to control each individual soldier separately, or to unite them into squads for convenience. Single soldiers and small groups are useful for scouting or capturing enemy’s peasants, buildings and artillery."

"A remake of the first Cossacks with all its original gameplay."

"We decided to do a remake of the first Cossacks with all its original gameplay," Grigorovich added, "but also give players updated graphics and a new story. … We really think that many of the players who were too young in 2001 to play Cossacks literally missed out on it and will be impressed by the gameplay of this classic RTS."

Scheduled for release "this year, when it’s done" Grigorovich says, Cossacks 3 will include 12 playable nations, including France, England, Russia, Ukraine and Prussia/Austria. Each will have their own unique forces and structures. Coming to Linux, Macintosh and Windows PC, it will include 5 historical campaigns, as well as multiplayer.

"Besides the historical campaign mode," Yeltyshev said, "including reenactments of the great battles of the period, Cossacks 3 will give players a choice of single-player and multiplayer modes with a flexible setup. For instance, Skirmish is a game against AI on a randomly generated map. At the beginning, the map will be hidden by the fog of war and using small groups of soldiers for scouting will come in handy."

To excel at the game, players will need to learn the quirks of each nation's weapons, as well as how to fight with period firearms and artillery pieces. 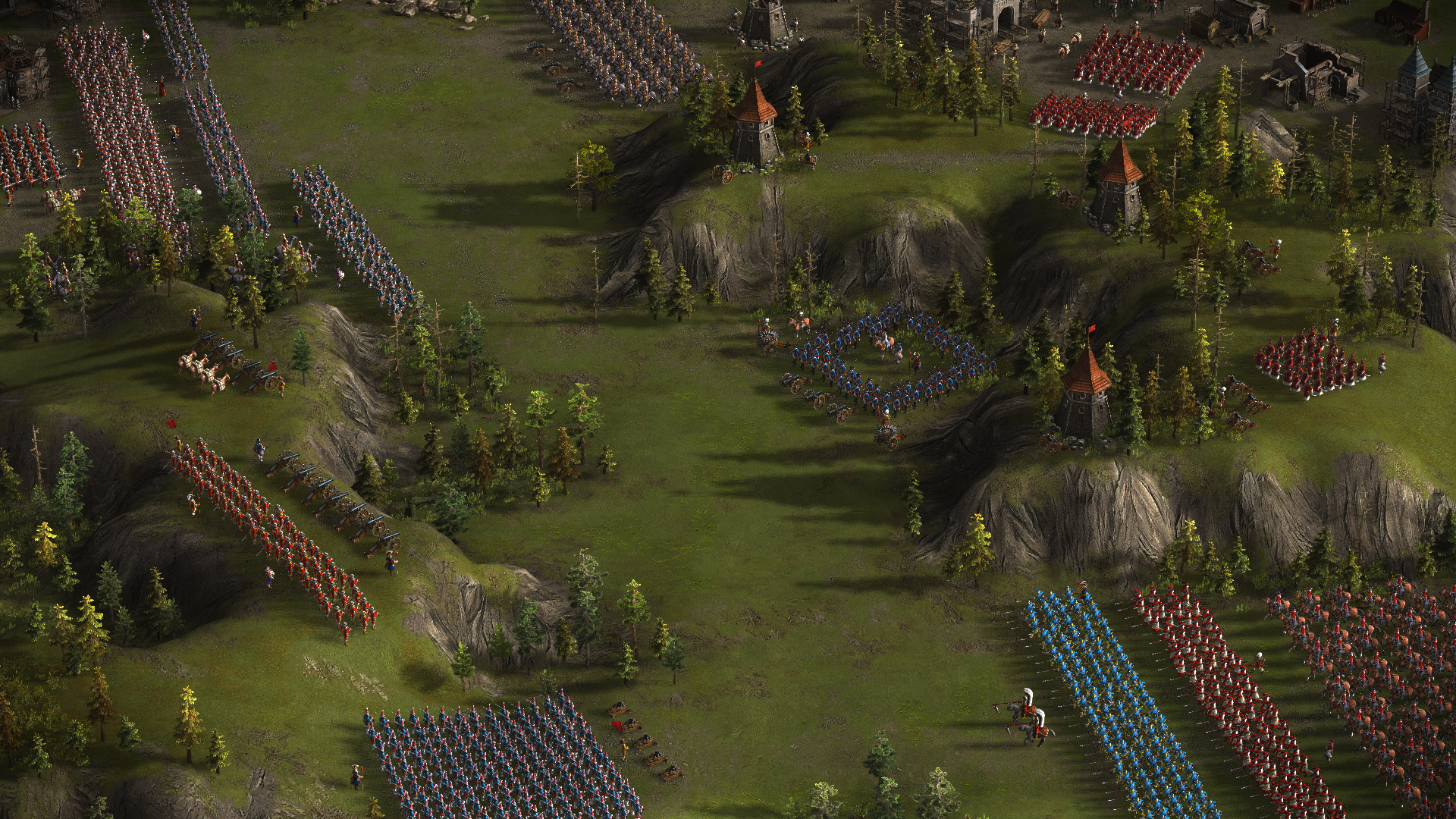 Terrain will play an important role in determining range for weapons and the effectiveness of their fire. But skilled players will also be able to use the terrain to their advantage as they maneuver large forces into position.

"It’s possible to hide from the enemy’s artillery behind mountains and high plains," Yeltyshev said, "and the later to use these same plains as a ground for your own cannons. Fortifications also add a tactical variety.

"Multiplayer modes will allow up to 7 players on the same map. They can be every man for himself, or joined into teams, and include a mix of humans and AI. It’s even possible to play against 6 AI enemies at the same time."

There will also be a complex map generation tool, adjustable resource availability, and even a count-down clock for the beginning of hostilities.

"One of the most popular variants of rules in the original Cossacks," Yeltyshev said, "was to allow opposing players one or two hours to build up and develop their bases and their armies, and only after that to try their strength against each other on the battlefield."

At some point after release, the team plans to support a total of 20 unique nations, and increase the unit count beyond 8,000 — the number originally supported by the first Cossacks at release.

Most importantly, full mod support will be baked in at launch. Grigorovich says the plan is to distribute Cossacks 3 with an editor, one that includes the same in-house tools the team used to build the game. They’ll be powerful enough, he said, to practically rebuild the game from scratch.

"We will give modders lots of simple mechanisms to tweak the game, add new content, redesign interface, AI, change balance and gameplay or even make a completely new game with goblins and orcs.

"We will support popular mods, as well as give them official status and provide mod makers with help, making their work better and smoother."

Even with the renewed energy of the work leading up to the announcement of Cossacks 3, the team at GSC was frank in saying they’re not the studio they used to be. The past few years since 2011, when the company was effectively mothballed and its staff laid off, has created a kind of brain drain. Many of the most experienced members of its original STALKER team have started their own successful game companies.

But, Grigorovich said, the people he has working alongside him now on Cossacks 3 include original members of the team that made that series great, and they’ll be putting everything they have into it.

More than anything, Grigorovich is glad to be back doing what he loves.

"I left GSC prior to its closing," Grigorovich told Polygon. "For me, it was my personal decision. … After 9 years of work and 7 released titles, I realized that I needed a break. When I left GSC, our RTS development department was closed. It’s always hard to make such decisions, but I’m glad I acted this way.

"I went through some personal things, not related to the games industry. Lately I’ve met some unique guys with several, already-released RTS titles behind them and a will to create new games.

"Only after that did thoughts of making a new Cossacks begin to appear. We’ve spent a lot of time planning and deciding what this new game should look like. After all, I came back to GSC and said that I wanted to make a new Cossacks. That’s how everything started. I am completely confident in our team’s talents and their ability to create Cossacks 3.

"Everybody should do the thing he does best," Grigorovich told Polygon. "For me, personally, Cossacks is not just a game series; it is a part of my life."